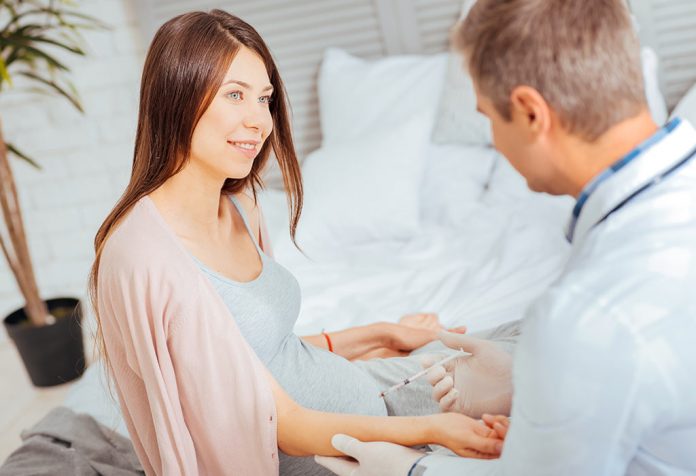 Taking medication during pregnancy has been a contentious topic for a while now. Vaccination, especially, is met with much resistance as women are concerned about the safety of the foetus as well as their safety. Here we discuss the Tdap vaccine which protects against Tetanus, Diphtheria and Pertussis.

What is Tdap (Tetanus, Diphtheria, Pertussis)?

Tetanus or Lockjaw, a bacterial disease, causes agonising muscle spasms and tightening of muscles. An estimated 10-20% of infected people die even after excellent medical care. The bacteria make its way into the human body through open cuts, and it is usually found in earth and animal waste.

Diphtheria is an infection that starts off with a sore throat and fever. It is caused by a bacterium which forms a thin membrane over the airways and the throat, causing difficulty in breathing. Without medical intervention, Diphtheria can be fatal.

Pertussis or a Whooping Cough is also a bacterial infection with symptoms akin to a common cold. Acute coughing spells can cause broken ribs and pneumonia in adults. It can be fatal to babies.

Tetanus is not a contagious illness, while Diphtheria and Pertussis can be contracted from the air if an infected person sneezes or coughs.

Can Tetanus, Diphtheria and Pertussis Cause Problems during Pregnancy?

Tetanus and Diphtheria are known to be lethal during pregnancy and could lead to loss of the foetus. Premature birth is also a concern that is linked to these illnesses. Tetanus can be passed on to the foetus if the mother was infected and did not have sufficient immunity to transfer to the baby.

Whooping cough during pregnancy has not been sufficiently studied. Problems in new-borns couldn’t infallibly be linked to maternal pertussis. It is presumed, though, that severe coughing could be harmful to mother and foetus.

What is The Tdap Vaccine?

Tdap is a vaccine that is given for prevention of the above mentioned bacterial illnesses. It is a vaccine made up of three components- a standard dose of tetanus antigens, a condensed dose of diphtheria antigens and pertussis antigens. The vaccine has no live element and is manufactured using deactivated non-infectious bacterial products that afford a full-bodied immune response. This means that the antigens cannot themselves create the disease but can trigger our immune system to produce the antibodies for fighting diseases.

Is Getting Tdap Vaccine Safe When Pregnant?

Getting the Tdap vaccine or injection during pregnancy is considered safe for mothers and their foetus.

It is not possible to contract any of the three bacterial illnesses from the vaccine as it has no live bacterial components. A mounting assembly of evidence recommends that it is all right to use inactivated bacterial toxoids during pregnancy to avoid disease in mother and baby.

Why is Tdap Vaccine Recommended in Gestation?

Vaccination against Tetanus, Diphtheria, and Pertussis is recommended during pregnancy because a mother passes on antibodies to her baby when she takes the Tdap shot while pregnant. In case of vaccination being missed during the pregnancy, if the woman has never had a booster against Tdap, she should be vaccinated before being discharged. This ensures that the mother does not contract any of the diseases after the birth of the baby, thereby reducing any risk of the baby contracting the diseases.

Is It Recommended to Get the Vaccine in Every Pregnancy?

Medical research and critical data reveal that antibodies against Pertussis began waning after 2-3 years of vaccination. This means that any vaccination that the woman may have received before pregnancy will afford protection for her, but not pass on antibodies to her baby unless she retakes an antenatal vaccination. It is, therefore, suggested that women take the Tdap vaccine during each pregnancy, irrespective of the time since the previous booster, to maximise passive antibody transmission to the baby.

Why are 27-36 Weeks Of Gestation chosen as the Preferred Time for the Vaccination?

The third trimester of gestation is optimal for spontaneous antibody transfer from the womb of the mother to the growing foetus. This affords the babies some protection until they can receive vaccines of their own. However, it can be taken at any stage of the pregnancy for protection.

What are the Risks and Side Effects?

There are no documented risks of taking a Tdap vaccine during pregnancy. Non-infectious vaccines that do not have a live component haven’t been proven to create birth defects or pregnancy-related complications. Tetanus and Diphtheria vaccines have been used for a long time without any amplified risks to pregnant women. No upsurge in birth defects or complications such as pre-eclampsia, miscarriage, premature delivery, or stillbirth were documented or reported. Multiple studies on said vaccines have been completed, and all provide supportive data. Data also suggested that there was no increased chance for health issues for the baby in the newborn period, because of the mother being vaccinated.

Common side effects of the vaccine are limited to pain, swelling or redness in the area of the shot, body ache, fatigue, or a headache.

Every year the CDC (Centre for Disease Control and Prevention) data suggests that about 5-15 infants die from Pertussis. Most of the mortality occurs in infants who are too young to receive their vaccines. It is imperative and prudent that pregnant women do their research and determine whether to accept a doctor’s recommendation to take a vaccine during pregnancy or decide against vaccination. Ultimately, vaccination or not, the safety of your infant rests with you.

Interventions during Labor and Delivery