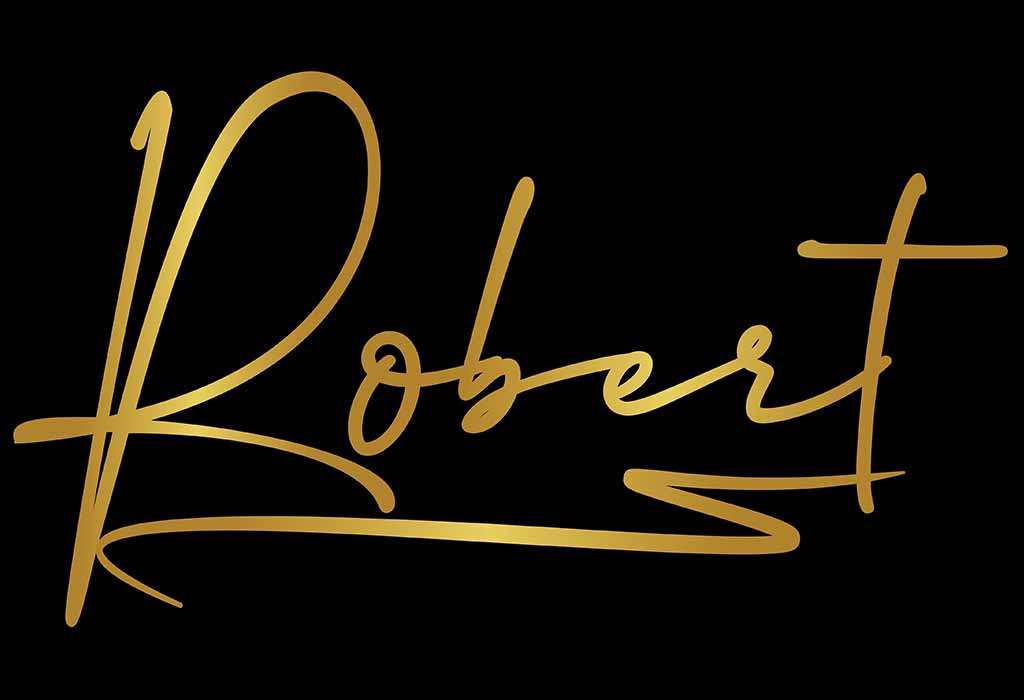 The name Robert stayed on Number 1 position in both 1925 and 1950. It was in the Top 25 for almost one century that gave it a true classic status. Rob and Robby are its common nicknames that have a slightly more modern appeal. Roberts is a Welsh surname of patronymic origin, meaning ‘son of Robert’, and is mostly found in North Wales. The name is the second most commonly used English name of ancient German origin. The meaning of Robert is “bright fame.”

What Does Robert Mean?

Derived from the Old Germanic elements, ‘Hrod’ for fame and ‘Beraht’ for bright, the meaning of Robert is ‘bright fame.’ Old Dutch Robrecht and Old High German Hrodebert is a compound of Hruod (Old Norse: Hróðr) “fame, glory, honor, renown” and Berht “bright, shining.” This English-originated name is popular among Christian boys. In English, French, German, Scottish, and American Baby Names, the meaning of the name Robert is ‘famed,’ ‘bright,’ ‘shining,’ ‘glory-bright,’ and ‘shining with glory.’

The name Robert derives from the Old German name Hrodebert, a combination of elements Hrod’ for fame and ‘Beraht’ for bright. After the Normans brought the name to England in the Middle ages, Robert replaced the Old English cognate Hreodbeorht and became popular among royalty and noblemen. The name has historical significance, shared by two Normandy Dukes, two kings of France, three Scotland kings. Robert the Bruce, who restored the independence of Scotland from England in the 14th century, was also named Robert.

Robert name variations are alternatives with their unique style, history, and cultural imagery. Here are some of the other spellings for Robert that sound similar or have the same spirit:

How Popular Is the Name Robert?

According to Social Security Administration data from 2020, Robert is the 80th most popular name for boys in the United States. Robert’s baby name ranking was amongst the top 50 most popular names but has now fallen in ranking. Robert’s popularity, however, remains one of the top 100 most popular names for boys in the United States today. In 1953, an overwhelming 86247 babies were named Robert. Though only about 4000 babies were named Robert in 2020, famous actors like Robert Downey Jr., Robert Pattinson, Robert De Niro, and Robert Redford have kept the name in the limelight.

Interest in Robert – US

Search trends for the name Robert, in the last ten years, have recorded consistent search popularity of over 50, reaching 100 in August 2012. Google search trends recorded the lowest popularity in March 2020, November 2020, and June 2021 at just 54.

The popularity of name Robert

According to search trends, the name has been searched the most in the United States in the last ten years, followed by Canada, Austria, United Kingdom, and Poland. The historical name belonging to royalty and its positive meaning might be why people choose Robert as a baby name.

Search trends of Robert – US

District of Columbia or Washington DC is the US capital city where the most searches for the name Robert have been recorded over the last ten years. Following close are New Jersey, Connecticut, Massachusetts, and New Hampshire that make it to the top 5 cities of the US where search trends for Robert have been the highest.

Middle Names That Go With Robert

Middle names help to ‘personalize’ a child’s name. A perfect middle name can enhance the importance of the name Robert as well as its meaning. Here are some of the double names with Robert that you can consider:

Classic or edgy, celebrity names are great pools of ideas while naming a baby. Here is an inventory of some popular personalities named Robert that can catapult your child to fame:

Names that rhyme with Robert can sound rhythmic while having the same or different meanings. Here are some of the modern versions of the classic name Robert:

Sibling names should complement each other to denote the special connection between the two. Here are some of the best well-coordinated sibling names that go with Robert that will help you to find the perfect names for his siblings:

Familiar, cute, and humorous nicknames aid in expressing love for a child. Here are some nicknames for the name Robert that would express your love for them:

Robert is a historically significant name with a spiritual meaning. Although its popularity has changed in the past five years, Robert has become a fresh find again and can be an excellent choice for your beloved son.