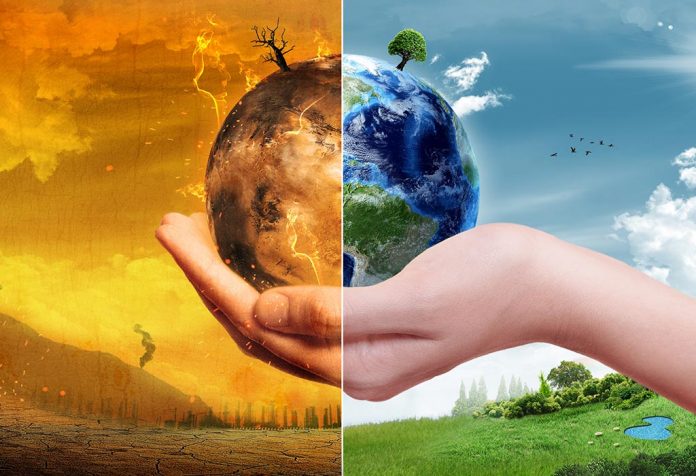 Scientist around the world have been discussing global warming and climate change for quite a long time now, and there’s a good reason for that. Climate change is real, and it is about to affect our lives significantly. Children need to be aware of climate change and its effects as it is their generation that will be most impacted by it in the near future.

What is Global Warming?

Global warming is a rise in the average temperature of the earth as a result of certain natural and man-made factors. The emission of greenhouse gases is a major cause of global warming. Certain human activities like deforestation and burning of fossil fuels lead to an increase in global temperatures. It was observed that between 1901 and 2012, the earth’s average temperature increased by 0.89 degrees Celsius. Even though it may not seem much, this small change in temperature can have an adverse effect on weather patterns, sea levels, and life on both lands and the oceans. It is interesting to note that the 11 hottest years on record in the last 100 years occurred after 1995. This is because of our increased industrial activities and emissions of greenhouse gases.

There are several factors that lead to warming up of the earth, and they are described below:

The earth periodically goes through phases of natural warming up and cooling cycles over time, spanning thousands of years. Right now, it is in the middle of one of its natural warming cycle. Unfortunately, human activity in the recent past and present have only sped up the warming process.

Believe it or not, the next time you decide to put on some hairspray or use a room freshener, you may be causing global warming. In the earlier days, they contained ozone reducing compounds that reduced the Earth’s protective ozone layer. Though these harmful chemicals aren’t used these days, they contain hydrocarbons and sulphates which increase global warming. As the population is increasing, trees and plants are being cut down to meet the household and industrial demands. Deforestation is the process of cutting down of trees. However, excessive cutting of trees is detrimental to the environment. Deforestation results in an increase in the production of carbon dioxide, which in turn leads to an increase in the temperature of the Earth.

Global warming affects everything on the planet and can have catastrophic effects on some of the delicately balanced systems like the weather and the environment. Some of the effects are as follows:

The weather is driven primarily by the heat stored in the atmosphere, land mass, and the oceans. Global warming with increased temperatures and heat retention by the greenhouse gases can change existing seasonal weather patterns all around the world. This leads to weather phenomena such as hurricanes, disruption of seasonal rainfall, and extended periods of droughts.

2. The threat to animals and the environment

3. Acidification of the oceans

Excess carbon dioxide released into the atmosphere by human activities gets dissolved into oceans, rivers, and lakes. Acidification affects many of the biological processes that are critical for the survival of ocean life.

4. Melting of the polar ice caps The polar icecaps store up most of the fresh water on the planet. When they melt, they dump in huge amounts of fresh water into the sea which affects its salinity. That, in turn, affects the ocean life and ocean currents. Satellite observations show that the Greenland ice shelf lost about 250 cubic kilometres of ice between the years 2002 and 2006. Antarctica lost 152 cubic kilometres of ice between the period of 2002 and 2005.

All the water added to the oceans by melting ice caps would raise sea levels by several feet over the next few decades. This means flooding across all the major coastal settlements and millions of people having to be displaced.

How to Prevent and Reduce Global Warming?

By reducing emissions of greenhouse gases, it is possible to slow down climate change. Here are some practical approaches on how to stop global warming for kids:

Here is some global warming information for kids that doubles up as interesting facts for them to remember.

What Is Climate Change?

Climate is the static weather phenomenon that is experienced over a region for decades to millions of years. It refers to seasonal rainfall, snow, sunshine and other weather conditions in the region. To go with a simple climate change definition for kids; it is the change in average weather patterns that can last for an extended period of time such as decades to hundreds of years. Climate change is not new. Earth’s climate has constantly changed for millions of years going from very cold to very warm depending on the natural cycles of the planet. Everyone is familiar with the term Ice Age, which is a period of cooling of the earth as a consequence of climate change. However, the climate change we are concerned about right now is the accelerated warming up of the planet due to the activities of mankind. Weather and climate, in the long run, are driven by the movement of heat our planet receives from the sun. Heat is absorbed by land, sea, and the atmosphere. Exchange of heat between these three causes the movement of air, moisture and ocean currents which drives weather. When any one of these factors is disturbed, weather patterns can change in unpredictable ways. As greenhouse gases increase in the atmosphere, it can absorb more heat and bring about a change in weather. Such changes are already being seen in erratic weather patterns such as El-Nino and La-Nina which can cause severe rainfall or severe drought at the same time in different places. It is speculated that emission of greenhouse gases by automobiles, industries and other human activities is causing the atmosphere to retain more heat.

Impact of Climate Change on Environment

To teach children about climate change, a thorough explanation of the effects of climate change on the environment should be given. It is imperative they understand it as our well-being is intimately tied to the well-being of our environment. Ecosystems on the Earth are delicately balanced with the seasonal weather patterns; any drastic change can have major consequences on the plants and animals. For example, the polar ecosystems are well adapted to low temperatures and low rainfall with little sunlight. Excessive warming there can change the growth of plants which in turn affects the animals that depend on them. Migration of many birds, insects and animals depend on the timely change of seasons and weather. Climate change can upset this cycle by changing their natural habitats and their migratory and mating behaviour by upsetting their finely balanced timing. Studies show that about 50% of breeding habitats of some birds can disappear eventually. Warmer oceans that are acidic can kill coral reefs and vast marine life along with it. Some predictions say climate change can wipe out 30-40% of the species on the planet.

Impact of Climate Change on People

Human life will be affected badly because of the changes in climate. Long spells of El-Nino can cause severe drought on one side of the globe and severe storms and flooding on the other. Third world countries, which mainly depend on seasonal rains such as the monsoon, will be affected by the change in rainfall. Warmer temperatures will spread diseases quicker, and rising waters will leave 100-200 million people homeless along the coastlines.

Other Climate Change Facts for Kids

These facts can be used for explaining global warming to a child.

Every action we take to cut down global warming contributes is small. However, cumulatively it can help slow down or stop global warming.

What, When and How to Begin Solid Foods for Toddlers

With What Will You Replace Your Liquid Love (Mother’s Milk)?