Home Pregnancy Diet & Nutrition Is It Safe to Eat Octopus While Pregnant? 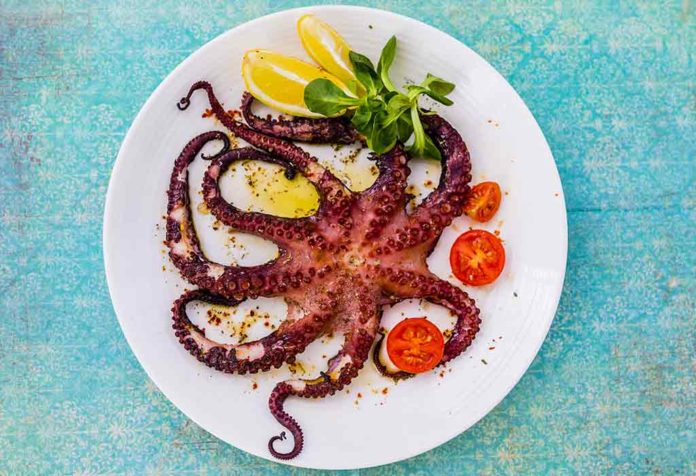 A healthy diet helps maintain a healthy lifestyle during pregnancy. Eating nutritious food keeps you feeling good, boosts brain development, and reduces the chances of complications of anemia, low birth weight, and congenital disabilities. While some people may cringe at the idea of ordering a plate of tentacles to the table, octopuses are boneless sea creature that has been considered a culinary delicacy by many cultures. However, most pregnant women worry about their diet as many foods that they love are vetoed during this stage. More so in the case of fish and shellfish, as despite being good sources of high-quality protein and other key nutrients like omega-3 fatty acids, some contain more mercury than others that can pose a danger during your pregnancy. Octopus and pregnancy, for instance, have been a subject of concern among health experts who recommend avoiding octopus for women who’re expecting. Thus, it is important to make an informed decision before consuming your favorite seafood.

Is Octopus a Sea Food?

Seafood includes sea fish, crustaceans, and cephalopods. Due to their diversity as a food group, it can be confusing to classify them as safe to eat by a pregnant woman. The octopus is a mollusk and belongs to the cephalopod family and is classified generically as “shellfish” even though it lacks a shell. A well-cooked octopus gives a similar taste and consistency as lobster.

Like most shellfish, an octopus must be thoroughly cooked to make it safe for pregnant women to eat. Since it doesn’t have a strong flavor, it can take on the same smell and texture as the decadent shellfish. Most often, the meat of the octopus is influenced by the ingredients used when cooking it, which is why most restaurants serve it with a sauce for added zest.

Octopus is also seafood that you can enjoy in cold and raw form. However, when served raw, octopus is perfectly soft and chewy while it takes on a tougher consistency than when cooked well.

How Safe Is Octopus to Eat While Pregnant?

Since Octopuses have low to medium mercury levels, less than some sea fish; therefore, they are generally considered safe to be incorporated into a pregnant woman’s diet in moderation. Moreover, safety precautions need to be followed properly while cooking octopus which usually destroys all the germs of this kind of shellfish.

However, cooking alone doesn’t eliminate the heavy metals that involve risks to a woman and her baby. Avoid consuming more than two servings of 6 ounces of octopus per week. This quantity per week is enough to prevent an excess of heavy metals while still enjoying the benefits of these foods. Preparation of raw octopus can be tricky as you don’t want to end up with undercooked octopus, that’s very rubbery and extremely difficult to eat.

Eating grilled octopus when pregnant is considered safe as eating octopus prepared by boiling or baking, ensuring the octopus is fully cooked and tastes great. This process is mostly done by cutting the thickest part in half and checking that the inside is hot and cooked all the way through. Raw, only marinated, or undercooked octopus should be strictly avoided. It may host harmful pathogens, parasites, and organisms, such as bacteria and viruses, that cause diseases and severe complications during pregnancy.

Benefits of Eating Octopus During Pregnancy

Octopus is a good source of protein, vitamins, and minerals. It’s also low in fat, making it great for weight loss. Of course, its health factor can depend on how it’s prepared. Frying it or cooking octopus in butter or oil can add extra fat and calorie content to your meal. Here are some benefits of eating octopus during pregnancy.

Octopus has Omega-3s that can reduce blood pressure levels and decelerate plaque buildup in your arteries, reducing stress on the heart. It reduces triglycerides and fats in your blood, increasing the risk of stroke, irregular heartbeat, heart attack, and heart disease.

The taurine in octopus has an amino acid that helps fight inflammation in the body and works as an antioxidant that protects cell damage associated with cancer. Octopus also contains high levels of other antioxidants that may reduce cancer risk, like selenium, vitamin B12, and folate.

Octopus contains magnesium that supports healthy brain activity like memory power and learning processes. It may reduce the risk of degenerative diseases like dementia or Alzheimers.

Eicosapentaenoic acid (EPA) and docosahexaenoic acid (DHA) are the two omega-3 fatty acids found in octopuses that can prevent or lessen the symptoms of depression and other mood disorders.

Octopus is rich in vitamin B12 and iron that combats anemia may prevent neural tube defects like spina bifida and anencephaly.

Risks of Eating Octopus in Pregnancy 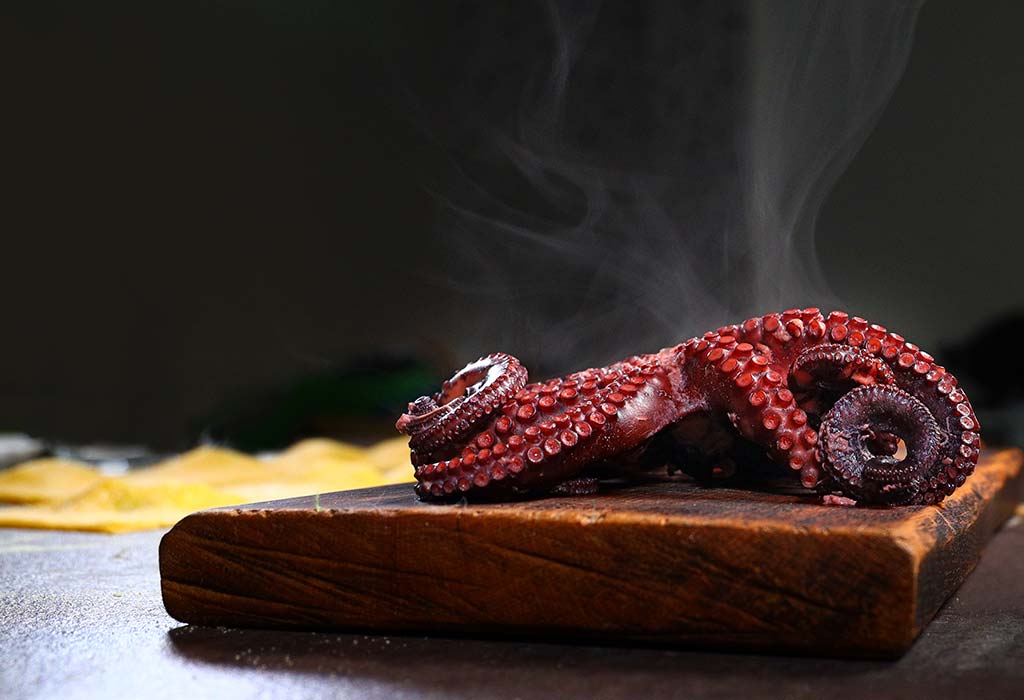 Mercury is a metal found naturally in the environment and is released into the open air by industrial pollution. When mercury settles in water bodies, bacteria transform it into a more dangerous form that accumulates in the fatty tissues of fish. As traces of mercury are found in almost all fish species, it tends to concentrate more on large predatory fish like octopus, which has the highest accumulation of mercury because they feed on other fish and have a longer lifespan. Here are some of the potential risks of eating octopus in pregnancy:

As octopus is eaten worldwide, it is difficult to assume the exact mercury level. It may depend on its size and the source of harvest. The American Pregnancy Association has listed this shellfish as having a low mercury level. Nevertheless, the mercury level doesn’t vary in the different ways in which the octopus is prepared. The Environmental Defense Fund has also listed octopus as having a ‘moderate’ amount of mercury. So, with the declaration of these two sources, and in the absence of any scientific tests, the octopus can be presumed to be in the low to moderate mercury category.

What Octopus Dishes Are Not Safe When Pregnant?

Since there is more than one way of cooking octopus, their safety level depends entirely on preparation mode. Here are some Octopus dishes that can be marked unsafe when pregnant.

It is best to exercise caution and make the right food choices, keeping in mind the dilemmas around seafood consumption during pregnancy. However, in case of any specific allergic reaction with octopus, it is better to consult the doctor before deciding to include this shellfish in your healthy pregnancy diet.

Eating Crab while Pregnant
Eating Sausage in Pregnancy
Is It Safe to Eat Prawns during Pregnancy?

How to Deal With a Gas Problem in Toddlers

Be a Sleeping Beauty to Wake Up Prettier Than Ever!

10 Things That You Should Know About a Capricorn Child

18 Christmas Songs and Poems for Kids