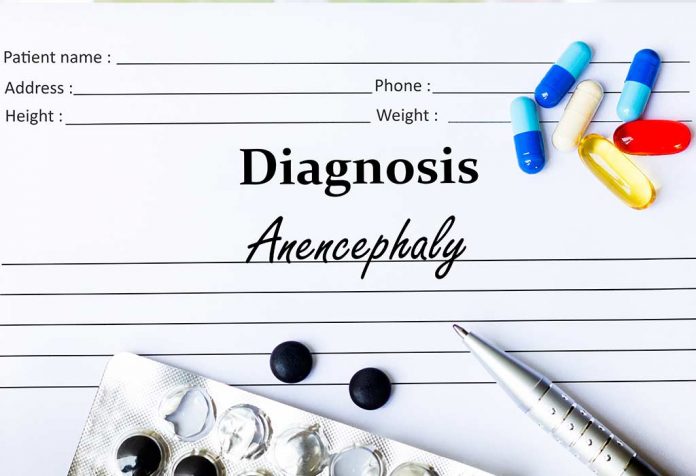 Anencephaly is a medical condition that affects 1 out of 1,000 pregnancies, with most of them ending up in miscarriages. The condition is mostly sporadic, and may be hereditary in a few cases. Anencephaly does not support life, and babies afflicted with this neural condition are stillborn, or die within hours or days of birth. Although the exact cause of anencephaly is unknown, it is believed to be a result of an interaction between genetic and environmental factors. There is no known treatment that can change the prognosis.

Anencephaly is a neural tube defect, which is a set of birth defects affecting the spine, spinal cord, and the brain. Neural tube defects differ in severity, and anencephaly is on the severe end of the spectrum. Anencephaly is a birth defect that affects the brain and the bones of the skull. Portions of the brain, and the bones of the skull, do not develop completely when the baby is in the womb. Owing to this, the cerebellum develops minimally. The cerebellum is responsible for senses like touch, vision, and hearing, movement, and thinking.

Anencephaly develops early in the pregnancy. The neural tube, which is a narrow shaft, closes during fetal development, and forms the brain and spinal cord during the fourth week of pregnancy. In this incurable condition, the brain tissue, if formed, is left exposed, and there is no skin and bone to cover it.

Unfortunately, babies born with anencephaly never gain consciousness or carry out the physical functions of the body, mainly because many important parts of the brain are missing. Since the condition affects the skull, babies are born with physically deformed brains.

How Common Is Anencephaly?

Causes of Anencephaly in Infants

Anencephaly is not revealed to be inherited. In most cases, it occurs just as a condition. When the neural tube does not close properly, the brain and spinal cord are exposed to the amniotic fluid that surrounds the fetus. This causes the nervous system tissue to degenerate. However, if you have had a child with a neural tube defect earlier, then there is a risk of having another baby with anencephaly. Environmental factors, nutrition, and genes during pregnancy affect and cause anencephaly.

There are certain risk factors that contribute to the chance of having a baby with anencephaly. A few common causes are:

Women with very high diabetes are at an increased risk of neural tube defects. High levels of sugar can cause harm to the development of the baby.

Very high body temperature, or using saunas and hot tubs during the early stages of pregnancy can increase the risk of having a baby with neural tube defects.

Women who do not have adequate levels of folic acid (Vitamin B9) could have babies with  neural tube defects. Women are advised to take 400 micrograms of folic acid prenatal vitamins before and during pregnancy.

Drugs or medicines for seizures, like phenytoin, carbamazepine, and valproic acid are likely to cause neural tube defects in fetuses. Certain drugs prescribed for migraines and bipolar disorder can also cause this condition.

Women who are obese before pregnancy can deliver babies with anencephaly.

Consumption of illegal drugs like heroin, and prescription painkillers like hydrocodone, during the first two months of pregnancy is likely to cause neural tube defects.

Who Is at Risk of Anencephaly?

The most evident signs of anencephaly are lost parts of the skull, mainly the bones at the back of the head. The bones around the skull are missing or poorly formed. The brain is also poorly developed, with the cerebellum severely affected. Some common symptoms are:

How Is Anencephaly Diagnosed?

Anencephaly tests are used by doctors for diagnosis during pregnancy or immediately after birth. The abnormalities of the skull at birth are very evident, with parts of the scalp and the skull missing in some cases. Common prenatal tests conducted are:

High levels of the alpha-fetoprotein in the liver can indicate anencephaly.

Fluid drawn from the amniotic sac that surrounds the fetus can be used to study evidence of abnormal development.

MRI (Magnetic Resonance Imaging) produces radio waves and a magnetic field that displays images of the fetus. An MRI scan provides more detailed pictures of an ultrasound. This MRI scan can be taken at any time.

Anencephaly tests as part of prenatal tests are suggested between 14th to 18th weeks of pregnancy.

Is There Any Treatment for Anencephaly?

There is no treatment or cure for anencephaly. An anencephalic fetus must be well-protected. Most of the treatment is supportive, to keep the baby as comfortable as possible. An infant born with this condition, like missing parts of the scalp, should have the exposed parts of the brain covered, and he must be kept warm and comfortable. The condition affects the life expectancy of the infant, and it is likely to be no more than a few hours or a few days. Grief counseling services are offered by hospitals to parents, to help them come to terms with the loss of the child.

Can Anencephaly Be Prevented?

It is difficult to prevent anencephaly, and may not be possible in all cases. There are a few steps that can be taken to reduce the risks. A daily dose of at least 400 micrograms of folic acid is recommended, if a woman is pregnant or likely to get pregnant. To reduce the risk of anencephaly, the folic acid intake must be monitored by taking supplements or eating foods that are fortified with folic acid. Doctors could recommend taking supplements and a diet rich in folic acid, depending on one’s condition.

If a woman has had one child with anencephaly, the chances of having another one is very low. Sufficient intake of folic acid before and during pregnancy can help further reduce the risk.

Chances of Recurrence of Anencephaly in Future Pregnancies

If an infant is born with anencephaly, the survival rate is low. To diagnose if there is a risk of anencephaly, tests like an ultrasound, MRI scan, blood tests, and amniocentesis are recommended. The risk of recurrence of having a child with anencephaly for parents who have had a child before with this condition does exist. This could be a neural tube defect of any kind – spina bifida, anencephaly, or any other condition. Doctors advise high doses of folic acid for women who have faced this condition, before they try to conceive again, and recommend that the couple work with a genetic counselor for a smooth pregnancy.

Once anencephaly is diagnosed, it can be a heart-wrenching decision for parents to decide whether to terminate the pregnancy, or follow through with it. The trauma of accepting that there are zero chances of survival for the baby is devastating. However, ending the pregnancy could help parents to move on, and start their life afresh. Neural tube defects are one of the main medical reasons due to which pregnancies are terminated.

Anencephaly is a common condition that affects the brain and skull of the baby. Given that it affects the brain, it very often results in miscarriages or stillbirth. The nervous system develops within 28 to 32 days after the baby is conceived, and that’s when the neural tube closes. Most women do not even know that they are pregnant by then. So, if a woman has had a history of children with neural tube defects, then she must seek guidance from her doctor for future pregnancies, and take necessary precautions.