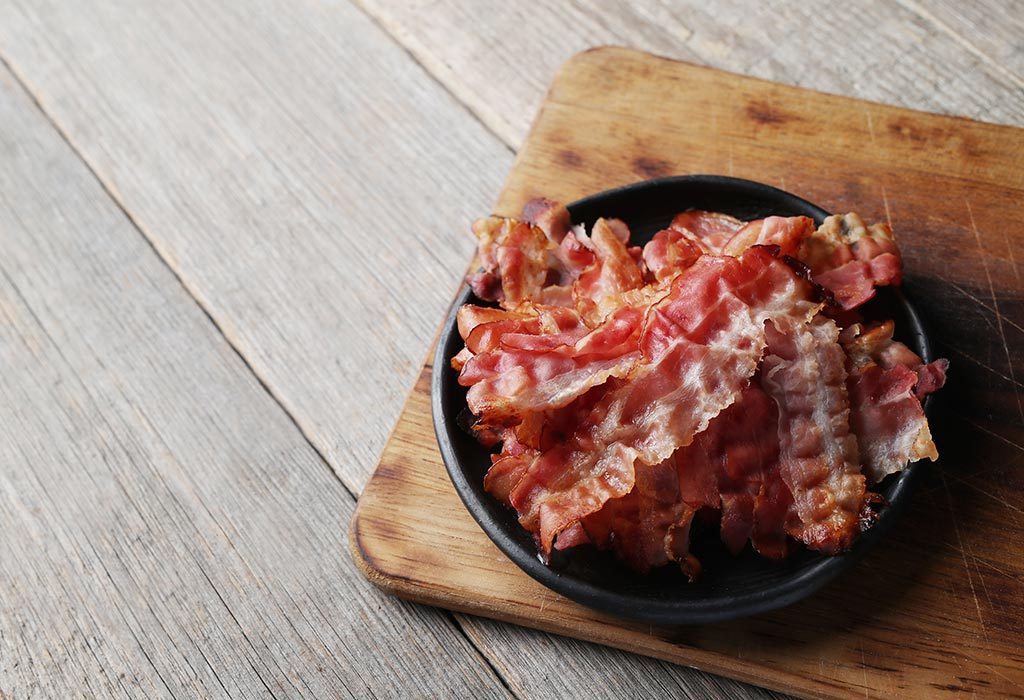 For mothers who are pregnant for the first time, it can be a time full of doubts. You have doubts about everything you do, and the potential effects it can have on the child. This is particularly true when considering the diet of the mother, as it plays a direct role in the development of the child during pregnancy.

Bacon usually refers to the processed meat of pigs, which is available in a wide variety in the market. The meat is processed extensively, but the source itself may be different – bacon made from turkeys are also available, so the main characteristic of bacon is that it is processed. The meat is made to undergo a process called curing, which involves treatment with a lot of condiments. Bacon is cured using salt, spices, nitrites, and sometimes even with sugar, which gives it its characteristic taste. The meat stays unspoiled for a long time because of the addition of salt, while it gets its tangy taste from the spices which are added.

No matter how tasty bacon is, the hard truth is that bacon offers very less nutritional value to the person eating it. The meat has a high amount of cholesterol and fat, which is very bad for the heart and overall health. The high sodium content is not healthy, either. The only positive thing about bacon is a large amount of protein present in it, which plays a huge role as it is essential for humans. In fact, almost 4 grams in a 13 gram serving of bacon consists of protein.

Benefits of Eating Bacon During Pregnancy

Even though consuming bacon seems like an ominous thing to do during pregnancy, it has been found that bacon does have some benefits to offer to the expecting mothers. The meat has a mineral called choline, which helps a lot in terms of the brain development of the child. Other benefits mainly revolve around the bacon helping the overall growth of the child.

Risks of Consuming Bacon When Pregnant

Let us take a look at two of the major risks associated with consuming bacon during pregnancy:

1. It Can Cause Listeriosis

Listeriosis is a common bacterium which is found in raw bacon. It has been found that pregnant women are far more susceptible to attacks by this bacteria. Listeria can dramatically increase the risks of miscarriage in pregnant women. Therefore, it is imperative that you cook the meat properly before consuming it.

When bacon is cured, it involves adding a certain compound called sodium nitrate, which has been identified as a substance that can increase the risk of cancer. While research has not found anything conclusive yet, it is better to be safe. So, make sure that you only obtain bacon which is completely nitrate free. Symptoms to Watch Out for If You Had Raw Bacon

Although raw bacon should never be consumed, in case you do, take a note of the following symptoms that you may experience and consult a doctor immediately:

It has to be noted that most of these symptoms are completely generic. They affect most women at various times during their pregnancy, so the onset might not be due to the consumption of bacon.

How to Choose the Right Bacon

You can choose bacon of the pigs that have been fed with pasture, or bacon from farmers who still prefer the traditional method of processing over the mass-manufacturing factories. Nitrate-free bacon is good, as it can benefit your child in the long run; if you do not find bacon that meets all these conditions, you can just make it at home.

How to Store Bacon

The period of time for which the bacon remains unspoiled depends on the conditions in which it is stored. Bacon remains good for around a week if the temperature is at a 4-degree Celsius, and it can last for even a month if the bacon is stored in the freezer at a lower temperature of -18 degrees Celsius.

How to Cook Bacon Properly

When cooking bacon, you must ensure that the uncooked bacon is kept far away from other food items. Also, remember to wash your hands both before and after touching the bacon. The bacon must be cooked for some time at a temperature of 75 degrees Celsius for it to be safe for consumption.

Bacon Alternatives You Can Try During Pregnancy

Here are some alternatives to regular bacon that you can try during pregnancy:

Here is a tasty bacon recipe that you can try when a bacon craving hits you:

Pasta with Spinach and Bacon

It is easy to make, and you can whip it up quickly, too!

Having bacon during pregnancy is not very harmful to your child if the amount you eat is controlled. If you feel that you have been infected as a result of consuming raw bacon, visit your doctor as soon as possible.