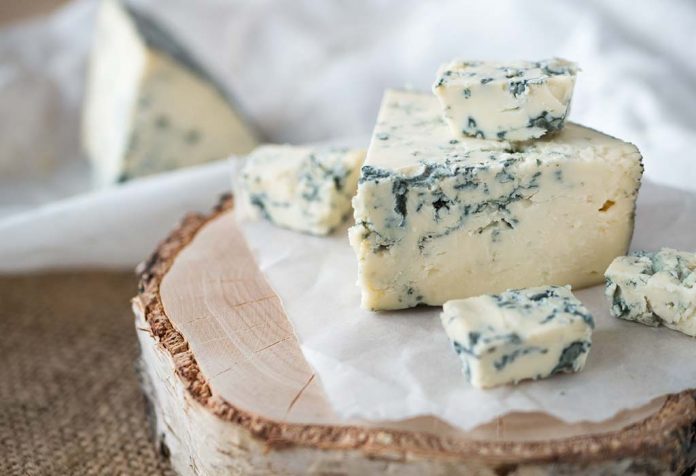 Cravings are a problem when you become pregnant. Cheese is an ingredient that’s used in almost every dish you come across. From sandwiches, dips, quesadillas, pizzas and rice bowls, melted cheese is a delicacy mothers enjoy. However, they have to forego cheese when they’re pregnant because most of these soft cheeses are made from unpasteurized milk.

When a pregnant mom eats soft cheese, she is at the risk of being contaminated by Listeria. It’s a type of bacteria that can cause flu-like symptoms and has the possibility of crossing the placenta barrier and affecting the baby. But what if the mother indulges in hard blue cheese over the soft blue one? We’ll get into that below.

What Is Blue Cheese?

Blue cheese is an aged cheese made from cow’s, goat’s or sheep’s milk. Noted for its distinctive spots, the cheese has a salty, sharp and pungent note to it. This type of cheese is low in fat but high in sodium which means anyone watching their blood pressure should take care. Mold in foods may be considered dangerous to consume but not all molds are the same. In cheese, the molds do not produce the two toxins that generally occur – mycotoxins and aflatoxins. This makes them safe to eat and the spotted appearance in blue cheese is simply a sign of fermentation take place.

In fact, when you partake in pasteurized blue cheese in your diet you end up improving your gut health. There are studies coming out that show that blue cheese may improve cardiovascular health and slow down signs of ageing.

What Is It Made Up Of?

Most blue cheeses are made using pasteurized cow’s or sheep’s milk. The cultures of the mold penicillium are used to refine the cheese and produce its distinctive dotted appearance. Most stories of how the blue cheese originated begin with someone forgetting they left their cheese in a cave. When they return, they find out it has turned spotted.

Roquefort blue cheese is made using ewe’s milk. The blocks are mixed with the mold of Penicillium roqueforti and it takes between three to six months for the spores to ripen. After the spots appear, a machine may be used to make finer perforations on the blocks. Gorgonzola blue cheese may sometimes be an exception. Usually, they are prepared in caves and that’s because of the stable and moist environment which lends it a distinctive appearance. Some blue cheeses are soft and salty while other varieties may be hard and pungent. In countries around the world, some of the popular varieties include Bleu de Bresse, Bleu d’Auvergne, Danablu, and Blue Cheshire. From mild to bold flavours, the most delicious blue cheese is always made from goat’s or sheep’s milk that comes from the countryside.

Can You Have Blue Cheese While Pregnant? 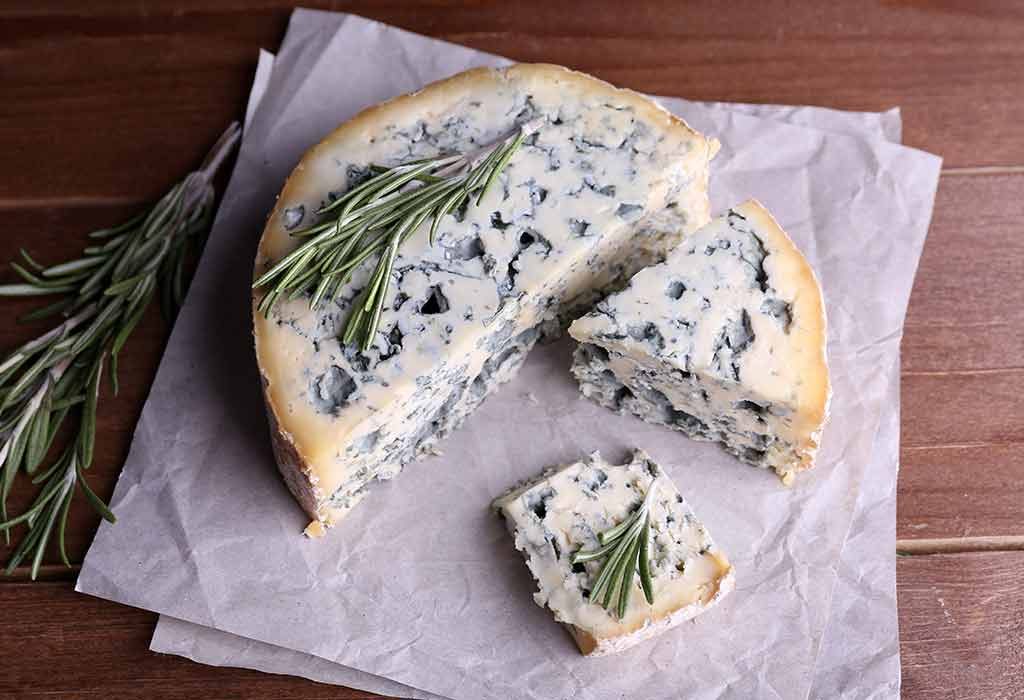 If you’re thinking of having blue cheese while pregnant, you can. But you have to be careful. Most blue cheeses are made using unpasteurized goat’s milk. Unpasteurized blue cheese has a bacteria called listeria which is known for causing miscarriages. Cooking the cheese or getting pasteurized blue cheese are good ways to get rid of that. Listeriosis is an infection that occurs from being exposed to these bacteria. It leads to the weakening of the mother’s immune system which makes her more prone to diseases and other infections. Abnormal child development post-birth is another possibility and side effect of Listeriosis which is something you don’t want for your child. In summary, cooked blue cheese is much safer for consumption by pregnant moms.

What Kind of Blue Cheese Are Unsafe During Pregnancy?

As a rule of thumb, pregnant women should avoid all soft blue cheeses. This is because soft blue cheese may contain higher counts of the Listeria bacteria, thus putting them at risk of complications during pregnancy.

Examples of soft blue cheeses that are unsafe are:

There is a risk of listeria while eating blue cheese salad dressing, so be sure to watch out for that.

Here are the risks associated with eating unsafe blue cheese when pregnant:

What Kinds of Cheeses Are Safe During Pregnancy?

In general, going with hard blue cheese during pregnancy is a safe bet.

When it comes to safe soft blue cheeses to eat during pregnancy, this is what we recommend as long as they are pasteurized:

Obviously you’re wondering what can you make out of your hard blue cheeses? There are tons of recipes out there online but we’ve gone with our favourite dishes. We don’t talk about recipes but instead what you can do with blue cheese.

Did we mention we love pizza? Who doesn’t!. Sprinkle some hard blue cheese on your pizza over the toppings for a delicious treat. You can add mushrooms, jalapenos, vegetables and spices to play around with the flavours. Pizza is a great way to satisfy your bread and cheese cravings simultaneously. You won’t regret it and it’s healthy for you!

Tortillas are a good source of protein, fibre and carbs. Making a tortilla wrap stuffed with juicy chicken breast, salads, and melted blue cheese is simply delicious. If you are trying to boost your iron and folate intake during pregnancy, adding some wraps to your diet might just do the trick. It’s a guilt-free indulgence!

Nothing beats a nice, chunky, juicy steak topped with gooey melted blue cheese. We recommend beef steak for the best results. Serve it with a side of fries, salad and you have yourself a wholesome and nutritious meal! If you’re craving seafood, you can go with a grilled fish steak and top it with shredded pasteurized blue cheese. Sprinkle Wakame or seaweed and it turns into a delicious treat!

We mentioned blue cheese was versatile. Blue cheese dips can be enjoyed as a salad dressing, with tacos and even burritos. You can even dip crackers into them and enjoy occasionally.

If you’re tired of your regular salad dressings, you can use pasteurized blue cheese sauce instead. The best thing about salads is how easy and simple they are to make. You can top them with chicken breast, nuts, veggies and olive oil. When you add blue cheese dressing to it, they get an extra layer of creaminess. Throw in a few grass-fed bacon slices and it becomes a wholesome and filling meal.

If you’re pregnant and have accidentally consumed unpasteurized soft blue cheese, don’t panic. Symptoms of Listeriosis infection don’t show up usually before 30 days. But just to play it safe, monitor your health and look for signs of flu and fever. If your fever goes beyond 100.5°F (38°C) you will have to contact your local healthcare provider and ask for help.

Sometimes nothing may happen and you could luck out. But don’t take chances and watch for the expected symptoms because you want to prevent the infection from getting worse as soon as possible. Also, we recommend doing a blood test since that will tell you if you’ve been infected or not. For cases where there’s an early diagnosis, usually, antibiotics are prescribed for effective treatment.

That’s pretty much everything you have to be aware of blue cheese. Just for a recap, if it’s soft – cook it and eat. If it’s hard, eat it directly and nothing will happen. That’s the takeaway from this article. But if you find yourself reaching out for soft cheeses a lot, we will always suggest making sure they’re made from pasteurized milk. Pasteurizing kills the bacteria and makes it extremely safe for your baby.

When you’re pregnant, we know that watching your diet can feel hard but adding some cheese to it just makes everything so much better. And who doesn’t love blue cheese? We sure do.

Factors That Affect Growth and Development in Children

9 Exercises You Should Avoid When Pregnant