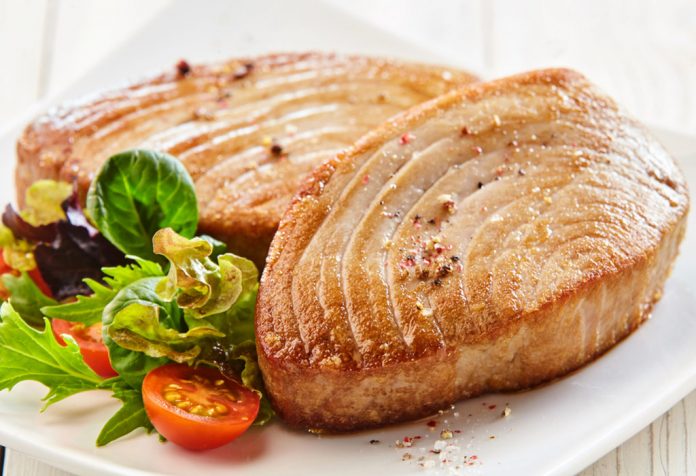 Giving birth to a child requires effort, and precautionary measures need to be taken care of, right from conception. Whatever a pregnant woman consumes has to be checked for its nutritional importance and safety to the mother and her foetus.

Can You Eat Tuna Fish During Pregnancy?

During pregnancy, you need to be extra cautious of your food intake, for your good health and proper growth of your baby. If you are a seafood lover, you are certain to wonder, ‘can pregnant women eat tuna’. The answer is yes. Tuna is a highly nutritious fish and can be consumed but in moderation.

How Much Tuna Can Pregnant Women Eat?

The amount of tuna that you may consume must be adjusted based on whether you have any other seafood during the same week. As per the US FDA (Food and Drug Administration), pregnant and nursing women are allowed to have 8 to 12 oz of seafood, and specifically:

Benefits of Tuna in Pregnancy

Risks of Eating Tuna While Pregnant

Common Tuna Types and Their Eating Rules During Pregnancy

Tunas come in different varieties as listed below and should be consumed in either broiled or baked form. Any uncooked or raw food may harbour bacteria, which can be harmful to your foetus. Make sure to cook your Tuna to a minimum temperature of 145 degrees Fahrenheit, so that any potential parasites or pathogens in the tuna get killed. Is Fresh Tuna Good for Pregnancy?

Fresh tuna feels oily, but it has the best nutritional values and is considered safe for pregnant women. It contains vitamins, minerals and proteins, and is a rich source of omega-3 fatty acids. These help in proper growth and development of the brain in the foetus.

Is It Safe to Have Canned Tuna During Pregnancy?

Canned tuna is permissible for a pregnant woman as long as it is had in a limited amount. Regular consumption of canned tuna has certain health risks to your growing foetus.

Tuna Types to Eat and Avoid

Here, we provide you with a list of safe and unsafe tunas to be had during pregnancy and nursing.

In pregnancy, you need to be careful with your intake of seafood like tuna, because high levels of mercury in the bloodstream of your foetus can be harmful to its brain and nervous system. Tuna is a nutritious fish and is beneficial for a pregnant woman, only when taken in judicious amounts.

Consuming Spirulina During Pregnancy – Is It Safe?

How to Clean Your Car’s Interior -15 Best Tricks