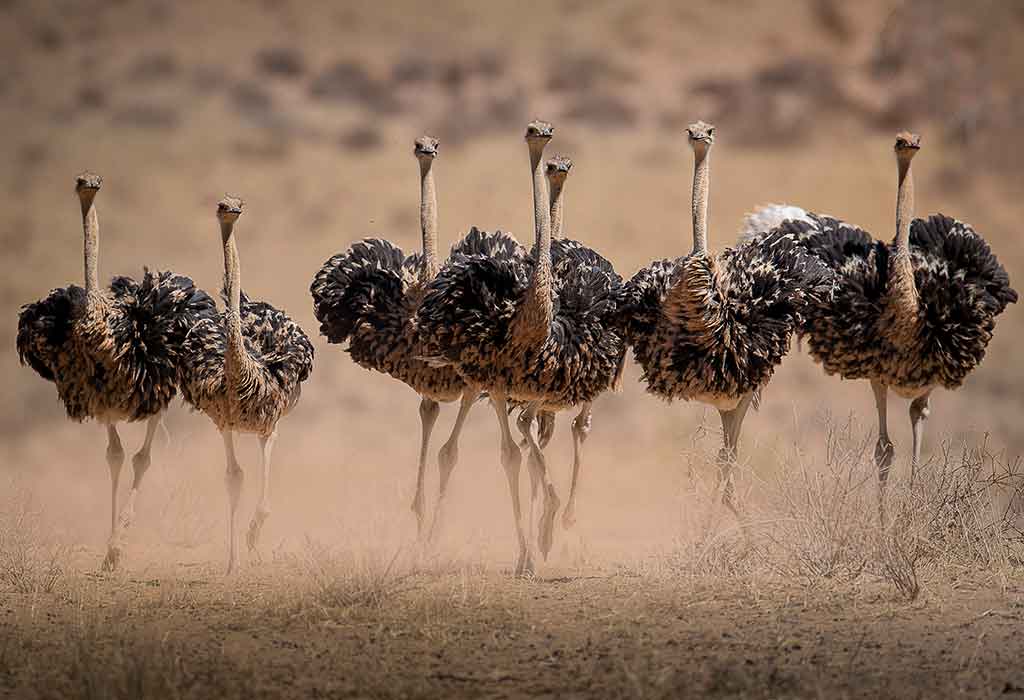 When you think of birds, the first thing that comes to mind is probably the tiny, endearing birds that chirp in your garden regularly. However, the ostrich, in comparison to your garden, is a colossal beast. The ostrich (Struthio camelus) is the largest bird on Earth, weighing up to a ton. When fully grown, it can reach a height of 9 feet and weigh more than 350 pounds at maturity. Continue reading for more such fun facts about ostrich for preschoolers that may also interest you. 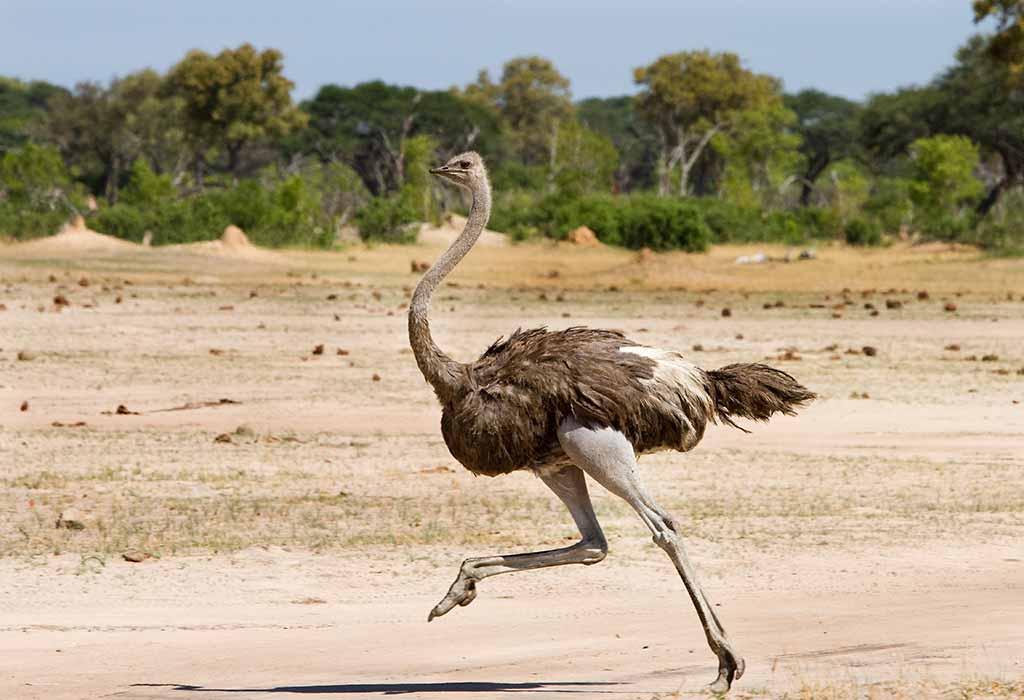 You’ve come to the right place if you’re looking for exciting ostrich facts for kids. This page will tell you everything you need to know about their habitats, eating habits, breeding, and even how to handle this lovely bird. You can provide excellent care for these beautiful little birds, but first, you must learn what they eat, how to breed them, and how to keep them happy and healthy.

Here are 15 cool facts about ostriches for kids that you may not have known.

1. What kind of an animal is an ostrich?

Ostriches are large wingless birds endemic to Africa and can grow more than two meters in height. These large and broad birds can run at an incredible speed. They can run at up to 70 miles per hour to avoid their assailant, making it a formidable adversary and one of the fastest birds that can run.

2. What class does an ostrich belong to?

Struthio camelus is a type of mammal that belongs to the Aves family, which includes the ostrich. It is the world’s largest bird, but it is unable to fly because of its size.

3. Approximately how many ostriches are there in the world?

A recent study estimated that there are only 150,000 ostriches left in the wild on the entire planet. Poaching and habitat degradation have resulted in a significant reduction in the amount of ostrich habitat available. The Somali Ostrich is now considered to be in danger of extinction.

4. What sort of environment does an ostrich live in?

Ostriches may be found in a wide range of habitats across Africa’s semi-arid regions, with each subspecies having its unique content. The North African Ostrich is located in northern Africa and is known as the “Ostrich of the North.” Other ostrich species, such as the Somali and Masai, may be found in Africa’s east. The South African Ostrich is still another species found in the continent’s southern areas, and it is the biggest of the species.

5. How do ostriches live?

Ostriches live in groups known as herds or flocks (small groups of animals that coexist closely). Approximately ten to twelve ostriches make up an ostrich flock. The alpha male is in charge of the squad. The males compete for the position of group leader, and the alpha figure is the one who takes the initiative and takes the group forward. A dominant female ostrich is present in each group, as is one of the males.

6. What is the average lifespan of an ostrich?

The typical lifespan of an ostrich is between 40 and 45 years, depending on the environment in which it lives.

7. What technique do ostriches utilize to reproduce?

To sustain their population, male ostriches compete with the other males in the group to procreate. They attract the female by rattling their wingtips and ventral fins. The powerful male and the ladies are given the honor of becoming the group’s leader.

Once mating has occurred, the males dig a large but not too deep hole, which all female ostriches use to lay their eggs. The dominant female is granted the honor of depositing her egg in the center of the hole and having a communal nest. The eggs are incubated for 42 days, which is quite an extended period. Even though the men are in charge of guarding, teaching, and feeding the infants, the females help the males rearing the offspring.

8. What about its captive breeding?

The protection of the ostrich is of tremendous significance to environmentalists. For many decades, the ostrich population has been gradually declining due to hunting and habitat destruction. The Somali ostrich is believed to be on the verge of extinction.

9. How do ostriches look?

Ostriches are flightless birds with long, thin legs and big bodies covered in black feathers and tiny wings. They’re one-of-a-kind. They are distinguished from other birds by their long, slender neck and small heads with solid beaks. Their faces seem to be much smaller than the rest of their bodies.

The body of an ostrich is covered with feathers that are both black and white in hue. Unlike female ostriches, male ostriches have primarily black feathers with a few white feathers near the end of their tail. In contrast to their male counterparts, the female birds feature grey feathers.

Ostriches have huge eyes as compared to other bird species in the animal world. Each eye measures 2 inches in diameter. Besides, they have strong legs and just two toes on each foot, allowing them to sprint. An ostrich is a ground-dwelling terrestrial animal with long legs and two toes.

10. Are these birds intelligent or attractive?

In addition to being fascinating creatures with a one-of-a-kind appearance, ostriches possess exceptional intelligence. While talking about ostriches, cute may not be the best word to describe them because they’re such magnificent, large birds. Therefore, they are more interesting than they are attractive.

11. How do these birds communicate with one another?

Growls, whistles, and booms are all ways for ostriches to communicate with one another. Because ostriches are typically silent birds, researching them does not reveal much about their behavioral patterns. Male ostriches increase their vocal activity and engage in mating dances during the mating season to impress females.

12. What is the average size of an ostrich?

Because of its enormous size and inability to fly, the ostrich is considered the world’s largest wingless bird by some standards. Ostriches can grow up to 2.8 meters tall, making them the tallest wingless bird species on the planet and the largest in the world.

13. What is the top speed at which an ostrich can fly?

Ostriches are flightless birds, i.e., they are incapable of flying. It is difficult for them to fly since they have tiny wings and large bodies. On the other hand, these birds are speedy runners and can achieve speeds up to 40 miles per hour and cover up to 5 meters in a single stride. Ostriches have strong legs that enable them to run at breakneck speeds. Their kicks are so strong that a single kick may quickly kill a human or even a lion.

14. What is an ostrich’s typical weight?

The body weight of an Ostrich can range between 138 to 308 pounds.

15. What precisely do they survive on?

Ostriches are omnivores that consume a wide variety of grains, plants, and tubers, as well as small invertebrates and reptiles of varying sizes when they are in their natural environment.

Other Information About Ostrich for Children 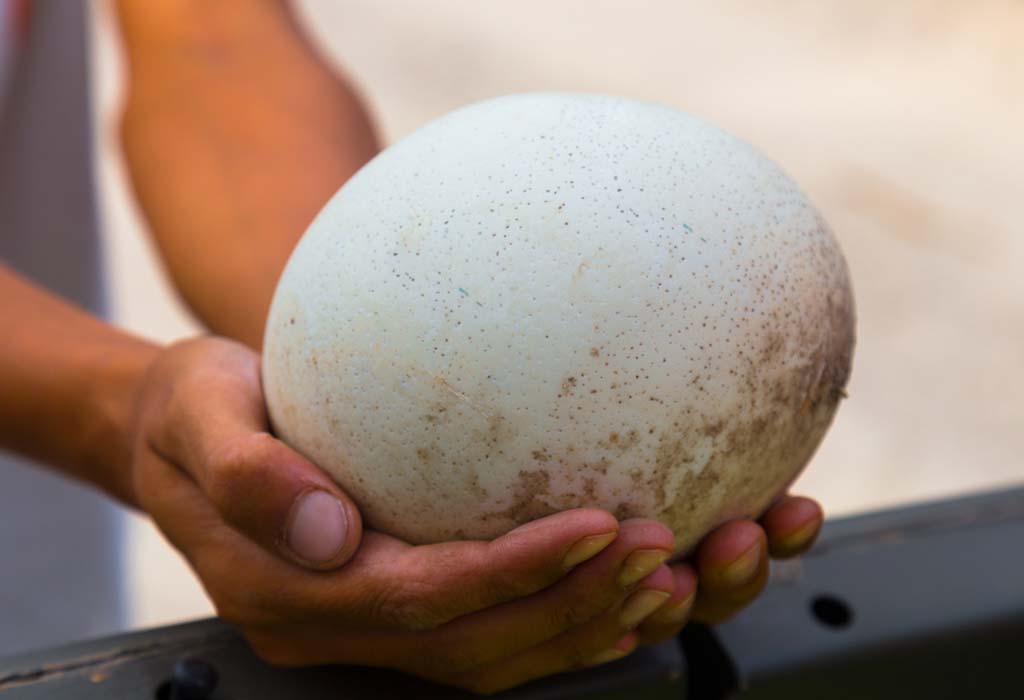 Have you ever shared some of the fascinating facts about ostriches with your young child? If not, you should. Alternative question: What remarkable piece of historical information did your child come across about ostriches and consider incredible? Please continue reading to learn more about the fascinating world of ostriches, as well as some exciting yet weird ostrich facts that are less known.

Have your kids been taken aback by the sight of a tall, thin, and feathered ostrich? Does your child find the ostrich’s quick running fascinating? If you believe your young children might benefit from learning more about this unusual and world-record-breaking species, you should share these fascinating ostrich facts with them!