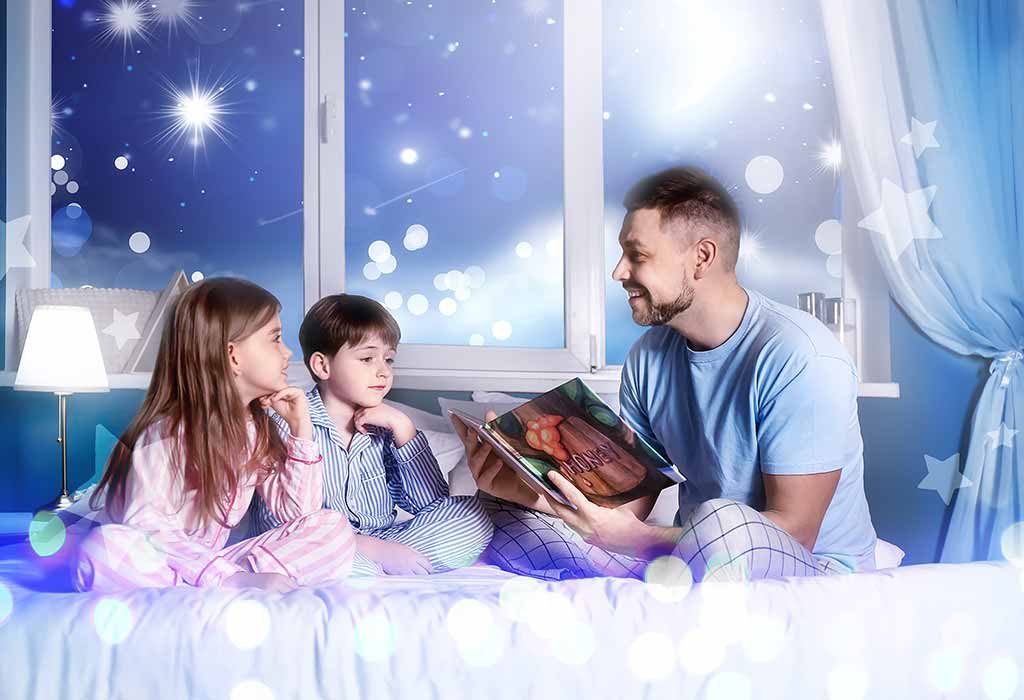 Parents reading bedtime stories to their children form an important part of kids’ lives. Not only does it allow parents to put their kids to bed without a fuss, but it also allows them to communicate and imbibe strong values in their little ones through a medium that they can understand – stories! It is also essential for stimulating literacy development as well as strengthening the parent-child relationship. Here are four of the best short stories that you can tell your little ones at night.

Bedtime stories should be short and easy to follow because your little ones are exhausted from a long day of playing. Try these adorable 5-minute stories that your kids will absolutely love!

The next day when the King entered the room, he was astonished to see that the room was filled with gold. He ordered her to be put into a bigger room with more straw and said that he would let her go if she could turn it all into gold. At night, the imp appeared once again and offered to help her in exchange for her ring, to which she agreed. So he turned the straw into gold and disappeared in the morning. The King was once again astonished!

Again, he ordered that she be put in an even bigger room with even more straw and said that if she could spin it into gold, she would be his Queen. When the night came, and the imp appeared, she told him that she had nothing left to offer him. The imp said, “If you promise to give me your first child in exchange, I can help you.” She agreed, and the imp turned the straw into gold and disappeared.

When the King entered the room the next morning, he was amazed to see the room full of gold. Thinking that the miller’s daughter could make him even richer, he kept his promise and married her. Soon, she gave birth to a child, and the imp appeared again. She offered him as much gold as he wished to have so that she could keep her child. But the imp said, “I have no interest in your gold, but I will let you keep your baby if you guess my name within three days.”

For two days, she kept listing names but was unsuccessful. For every attempt she made, the imp kept saying “no”. So the Queen decided to send a messenger to follow the imp and find out his name. The man followed him through the woods and into a cottage. While walking, he heard the imp sing to himself, “Tomorrow, tomorrow, tomorrow, I’ll go to the King’s house, nobody knows my name. I’m called Rumpelstiltskin…”

When the imp returned the next day, the Queen continued to list names and then finally, said “Rumpelstiltskin”. The imp got furious and stomped his left foot into the ground, leaving a big hole into which he disappeared forever.

Once upon a time, in a faraway deep ocean, lived the Smiley Shark. He was the smiliest, sunniest, toothiest and biggest fish of them all. Every day, the Smiley Shark would look at the other fish dip and dive and jiggle and jive, dart and dash as they splished and splashed. He wished he could be splishing and splashing along with the rest of the fish. However, whenever he smiled at them, they would swim away.

Smiley swam to the Angelfish and asked he if she would play with him. The Angelfish shuddered and shook and then swooshed away as fast as she could.

Smiley Shark saw Puffer blowing bubbles and laughed thinking that it looked like fun and Puffer blew himself up into a spiky ball and then pricked Smiley Shark on his nose.

Smiley Shark then saw Starfish twirling, whirling, and prancing and dancing across the ocean floor, but when he giggled, the Starfish got frightened and twirled off.

Smiley smiled his toothy smile to Octopus, Jellyfish and Catfish, but in a flash, they all took off as fast as they could swim. Sad about everyone running away from him, Smiley wailed, “Everyone is afraid of my scary, big teeth.” and he didn’t feel like smiling anymore.

The fish continued to twist and turn, splash and churn and dance and prance while Smiley Shark looked at them from a distance. But suddenly, something seemed very wrong. The fish were all trapped! They cried, “Help!” and “Please, help us, Smiley Shark!” Smiley Shark swam around the fisherman’s net. Some of the fish cried, “What can he do? How can he help?” Then Smiley Shark did the only thing he could do; he smiled at the fisherman. The fisherman was terrified and screamed, dropping the net back into the ocean and rowed away as fast as he could.

“Hurray!” cheered the fish. They thanked Smiley Shark for saving their lives. Now, far away in a deep rolling ocean, lives Smiley Shark with all of his friends! Every day, they dip and dive, dart and dash, splish and splash and SMILE!

Each day, Mathew would rush out of his school and run home as quickly as he could. He would sit down and read his favourite Kindle book called “The Magic Story”. But one day, just as he sat down and started to read, the book began glowing brightly. Suddenly, with a WHOOSH, Mathew disappeared and landed with a bump near a castle. It was just like the one that was in his book. He decided to go into the castle and see what was inside.

While going inside, he met a girl called Goldilocks and she invited him in for lunch. He agreed, and they both had a large bowl of porridge till they were full. After Mathew was finished, he waved goodbye to his friend and set off for the castle again.

Mathew kept walking towards the castle and arrived at a bridge. As soon as he began to cross it, a grumpy old troll jumped in his way and threatened to eat him up. Suddenly, a big billy goat appeared and knocked the troll into the water. Mathew thanked the goat and waved him goodbye.

He continued walking towards the castle and then running past a starting line for a race. Near the line, he saw a sleeping hare and a slow tortoise. He reached the finish line, and won the race and so he thought that the castle could not be too far.

Suddenly, a large beanstalk appeared in the middle of his path. At its top was the castle. He began to climb and climb till he reached the top. But the door of the castle was too big and heavy for him to open. So he found a window and climbed through it.

Inside the castle, he found a magical harp that was playing beautiful music and a goose who had laid golden eggs. He then found a mysterious door and opened it to find a wizard and a table on which lay his book “The Magic Story”. The wizard handed the book over to Mathew and said that it was time for him to go home. He zapped the book, and suddenly Mathew disappeared.

He found himself back in his house and wondered whether it was all a dream. He settled down to read his book and the book began to glow. Mathew smiled and vanished.

4. The Little Boy With a Slingshot Story

A long-long time ago, there lived a brother and a sister named Sammy and Marie. In their summer holidays, they would visit their grandparents at their farm. Sammy would take his slingshot and go to play in the woods. He practised over and over for many days, but all his efforts were in vain. Despite all his efforts, he always missed the target.

At lunchtime, his grandma called him in to have lunch. Disheartened, he headed back for lunch. While walking, he came across Grandma’s pet, a cute little duck. Excited, he took his slingshot and aimed it at the duck. Astonishingly, the shot hit the poor duck right on its head and killed it. Sammy was shocked and extremely frightened. He hid the duck in a pile of woods. Marie saw him from a window in the house but decided not to confront him.

The next day, grandma asked Marie to help her wash the dishes. Marie immediately retorted, “But Grandma, Sammy told me that he wanted to help you with the chores.” Marie then turned to Sammy and said, “Remember the duck?” Sammy was terrified and anxious now that he knew that Marie knew his secret about the duck. If he did not obey her, she would tell their grandparents about it. Without uttering a single word of protest, Mathew did the dishes.

Later, in the evening, Grandpa asked the children if they wanted to go fishing. On hearing this, Grandma said, “I am sorry, but I need Marie to stay with me and help me with supper.” Marie turned to Grandma and said, “That’s alright, Sammy said that he wanted to help you make supper.” and once again, she whispered to Sammy, “Remember the duck?” Sammy stayed back home and helped grandma make supper while Marie went fishing with Grandpa.

A few days went by, and Marie continued to take advantage of Sammy. Sammy couldn’t stand it any longer and confessed to Grandma that he had killed their pet duck. With a knowing smile, grandma knelt down and gave him a hug. She told him that she already knew about it as she was standing at the window when it happened, but she forgave him because she loved him. She said that she was waiting to see how long he would let Marie take advantage of him.

Sammy apologised to Grandma and hugged her. Sammy and Marie had a wonderful summer vacation, and each of them learned a valuable lesson.

Read these adorable and educational stories to your little ones at bedtime and be sure to tell them slowly, with actions and sound effects. Soon, they will be your kids’ favourite!