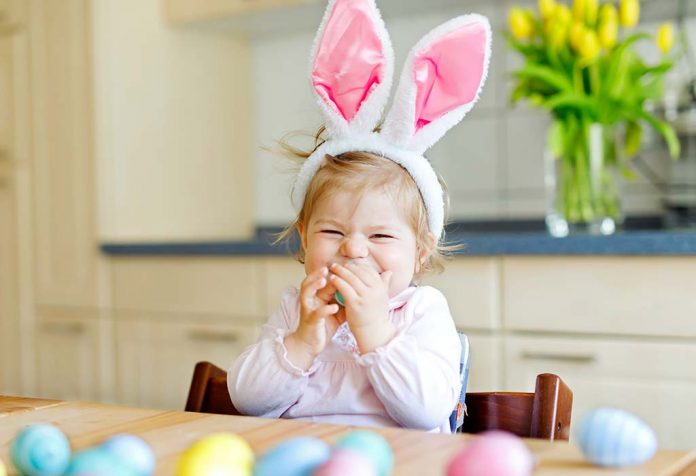 Kids love stories. Stories, in fact, are more than just a fun activity. They play a pivotal role in the overall growth and development of the child, particularly in the cognitive areas. Some of our best childhood days were when our mothers or grandmothers used to tell us a really good story right before bedtime or during meal time. Do the same for your child. Create memories, make precious moments that your child will look back on and remember with warmth.

Most of us have heard our favourite stories, especially at bedtime.

1. The Hare and the Tortoise

Once upon a time, there was a hare and a tortoise. They lived in a huge jungle, with other animals like tigers, elephants, deer, and crocodiles. The hare was very fast on his feet. He took part in many races, and always came first, no matter who the opponent was. Over time, his constant victory turned him into a very proud hare. He began to put in lesser effort in the races he took part in because he was winning them all anyway. Now, in the same forest, was a wise tortoise. Unlike the hare, the tortoise was extremely slow. In fact, he was one of the slowest animals in the jungle. He kept observing the hare, and he saw that the hare’s success was getting to his head. So he decided to teach the hare a lesson. He called all the animals of the jungle, including the hare, and openly challenged the hare to the race. When the animals heard this, they all began to laugh. Animals that were faster than the tortoise had lost to the hare. How was the tortoise, which was the slowest animal in the jungle, going to defeat the hare? But they all were curious, and the hare loved a challenge. So he accepted it.

The next day, the hare and the tortoise were all set to begin the race.“On your mark, get ready, and GO!” The monkey of the jungle said, waving a white flag. 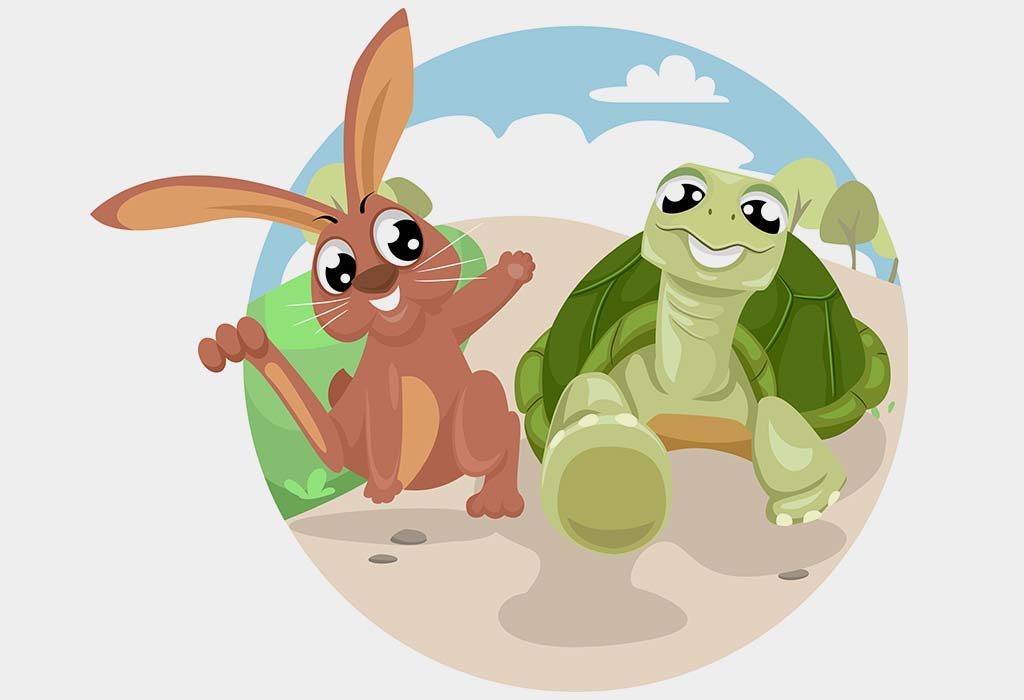 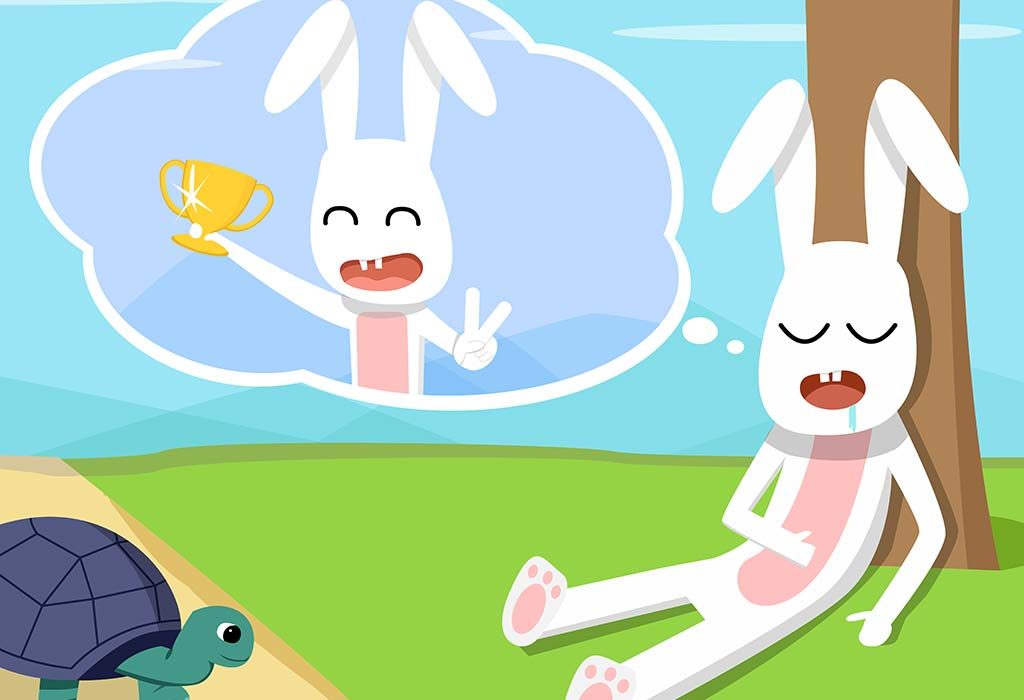 He found a shady, comfortable spot and fell asleep. Meanwhile, the tortoise never gave up. He kept running. By the end of the day, to everyone’s surprise, the tortoise was the winner! 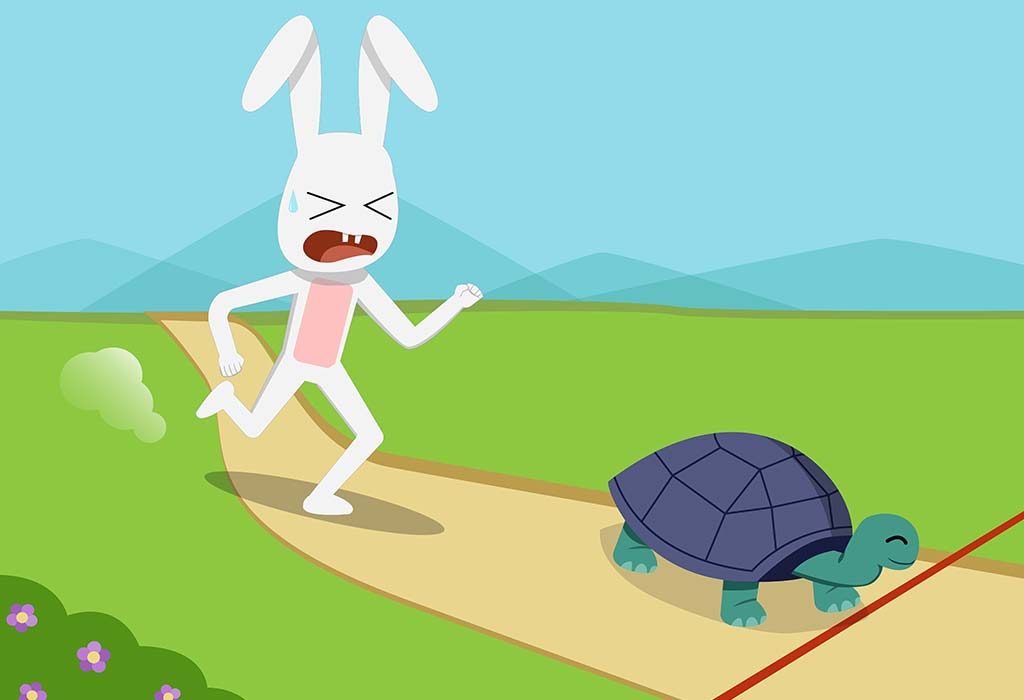 The hare, because of his pride and overconfidence, had lost the race. The moral of this story is, slow and steady wins the race.

2. The Lion and the Rabbit

Once upon a time, there was a proud, evil lion. He said he was the king of the jungle. Every day, he would mercilessly go hunting and kill many animals for his food. Soon, all the animals were worried. They held a meeting and decided that if the lion continues to do this, then no animal will survive. So, they approached the lion and told him a proposal. Each day, they said, they would send one animal to the lion’s den. This way, the rest of the animals for that day will be at peace, and the lion would not need to go hunting. The lion liked the plan. So from the next day, the lion would wait in his den while the others sent an animal for his meal. This happened for many days. Finally, it was the turn of a very old but wise rabbit. He was forced to be the meal of the day for the lion. He decided to put an end to this. So, he took a longer route and made sure he got to the lion’s den very late.

When the lion looked in, he saw his own reflection but thought it was another lion. He roared in anger, and the reflection did the same. Brimming with anger, the lion jumped into the well to fight with the other lion but ended up falling to his death because of his stupidity. The moral of this story is that sometimes, intelligence is more important than physical strength.

Once there was a crow. It was a hot day, and the crow was extremely thirsty. He kept flying around, looking for some water. After a very long time, he finally found a jar of water. With great happiness, he flew to the jar to drink the water. But when he tried to put his head into the jar, he realised it was too narrow. He tried to tilt the put, but it was too heavy. Sad and frustrated, he kept thinking. Finally, he saw pebbles on the ground. He had an idea.

One by one, he put the pebbles into the jar. The water level slowly rose, and the crow could drink the water.

4. The Boy who Cried Wolf

Once upon a time, there was a very naughty shepherd boy. He would take his sheep for grazing, then climb up a tree, and shout for help, claiming that a wolf was attacking his sheep.

Every time this happened, the farmers and other men would come to rescue him and his flock. But once they saw he was lying, they would leave angrily. Then, the boy would laugh. This went on for a long time, but one day, a wolf really came and attacked his sheep. But this time nobody heard him or offered to help him because they did not believe him anymore.

5. The Crocodile and the Monkey

But when they got to the middle of the river, the foolish crocodile told him the truth, that his wife wants to heat the monkey’s heart for dinner. The monkey was smart, so he quickly told him that he had left his heart in the berry tree, so he had to go get it. Happily, the crocodile agreed. But when they got to the banks, the monkey jumped to the highest branch and saved himself. He then told the crocodile that he would never trust him again. The foolish crocodile was sad, and he had to go home to his evil wife without the monkey’s heart.

Once there were two siblings. The boy was named Hansel, and the girl was Gretel. Their mother died, but they lived with their father. Even though they were poor, they were very happy. But one day the father married again. His new wife was a very evil woman. She told her husband that they should leave the kids in the forest because they can’t afford to feed them. The father refused at first but eventually agreed. So the next night, the parents took Hansel and Gretel to the forest. However, Hansel knew of their plan because he had heard them. So, he had collected white pebbles that he threw along the way. The evil stepmom after walking for a distance left the kids in the forest and got home with the father. But Hansel and Gretel found their way back home following the white pebbles trail. The next day, the evil stepmom decided to do this again. But she didn’t let Hansel collect any pebbles. Since they had no time, they couldn’t find their way back, and they were truly lost. Hansel and Gretel kept walking, but they were tired and hungry. Suddenly, they saw a beautiful gingerbread house. 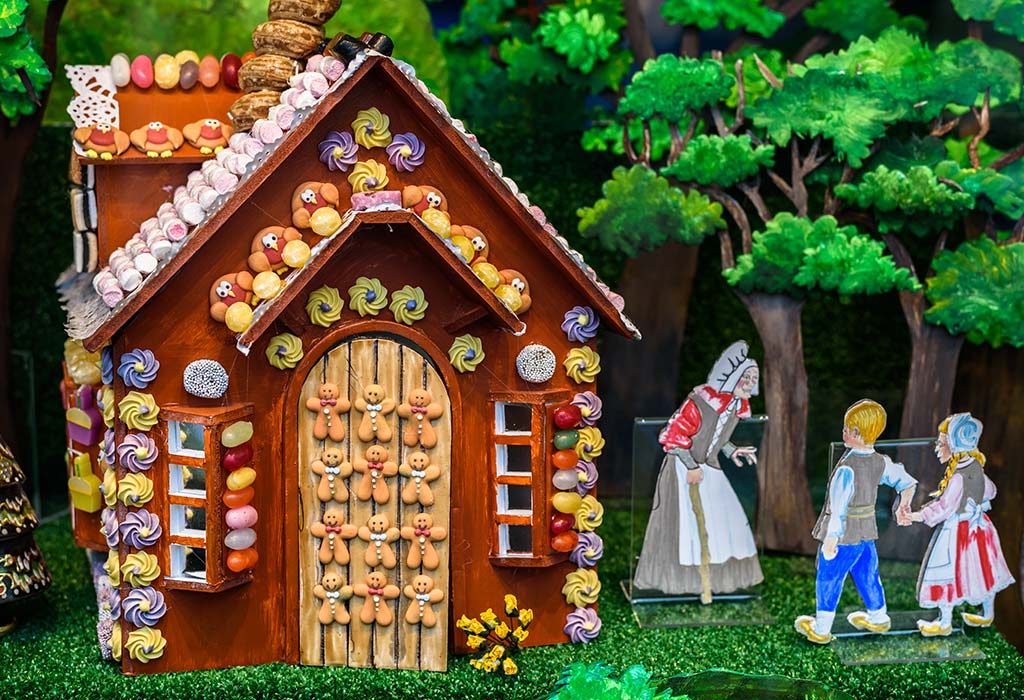 Excited and happy they started eating it. Then, an old lady came to them saying that she would take care of them. Hansel and Gretel were happy, but they didn’t know that she was a witch. She put Hansel in a cage and started making him fat, so she could eat him. And she made Gretel do all her household chores. One day, she decided it was time to eat Hansel. She asked Gretel to make the fire hot. Gretel had to think fast. She thought of a brilliant plan to save her brother. When the fire was hot, she called the witch and asked her to check. But when the witch was doing that, she pushed the witch into the fire. This way she saved her brother. They two siblings escaped and lived happily ever after.

7. Two Cats and the Monkey

One day two cats found a piece of bread. But they kept fighting for it. The first cat said it was his, but the second cat refused and claimed it to be his. A clever monkey that was walking their way decided to help them. He took the bread and told them that he would split it in half and share it equally with them. The cats agreed. But when he did this, one piece was bigger than the other. So he took a bite to make it equal. But this time, the other piece was bigger. This went on for a while. He kept taking a bite off from each bread to make sure it was the same size. However, in the end, he ate up the whole bread. The angry cats asked him why he did that, and the clever monkey replied saying that if they had dealt with the problem on their own, this wouldn’t have happened, but since they were stupid and could not do that, they both lost what they could have. The happy monkey went home while the two cats remained hungry.

Stories go way back. Storytelling for some is an art, and for others, it’s a tradition. For ages, people have been telling stories to their children. These are a few of the most popular stories for children. Your child will love them. Make sure you tell him or her these stories. Stories can enhance a child’s imagination and creativity. It can also increase the child’s vocabulary. Most of these stories come with a moral. This helps your child learn values so he or she can choose between right and wrong. Stories do a lot more than mere entertainment. So go ahead and incorporate the habit of listening to stories.

Travelling By Car During Pregnancy

Yummy Treats for Your Hair