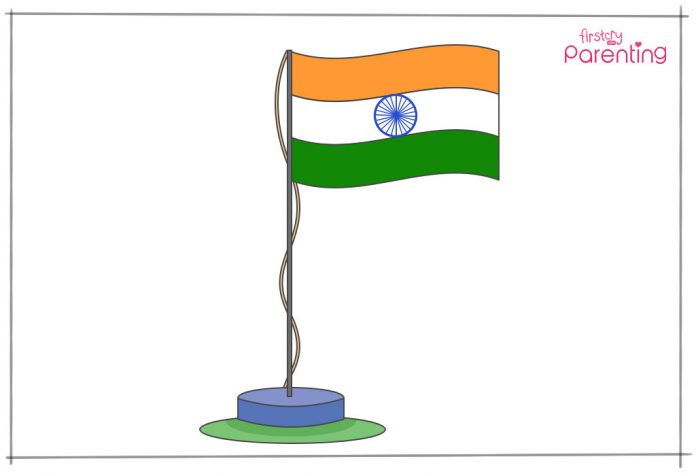 India celebrates its Republic Day on January 26 every year. This day is celebrated to commemorate the day when India’s Constitution came into effect after our country gained independence after a very long fight for freedom. January 26 is celebrated with patriotic fervour and festivities all around the country. This is the perfect time to involve your child in activities that teach him about India’s history and its rich cultural heritage. One of these interesting activities can be learning how to draw the Indian national flag. Doing so will serve a dual purpose – your child will hone his creative skills and, also, learn about the significance of our national flag. Flag drawing for children is one of the best and easiest activities. So, let’s get started! Take a look at how to draw the Indian flag step-by-step.

Video: How to Draw Indian Flag – A Simple Step-by-Step Guide for Kids

What You Will Need for Drawing the Indian Flag

Flag of India Drawing for Kids in 9 Simple Steps

Here’s a step-by-step guide on how to draw the Indian flag. Using a ruler, draw a pair of vertical lines that are parallel and close to each other. Join both the ends of these parallel lines. This is the pole that will support the flag. Draw a wavy line, extending outwards, from the top portion of the flag pole, and draw a similar line a few inches below, as shown in the illustration. Join the open ends of these wavy lines.

Step 3: Divide the flag into 3 parts. Divide the flag into 3 proportionate sections by drawing 2 wavy and horizontal lines across the flag, as shown in the image.

Step 4: Draw the circle for the Ashoka Chakra. Draw a small circle in the centre of the middle section of the flag. From the centre of the circle, draw 24 equidistant lines towards the outline of the circle. These lines will form the 24 spokes of the Ashoka Chakra.

Step 6: Draw the stand for the flag pole. Draw a flat and slightly elongated oval around the bottom of the flag pole, as shown in the image. Below the oval, draw an arc which is parallel to the oval. Join the arc to the oval with two small vertical lines. From the topmost tip of the flag pole, draw a wavy line flowing downwards, towards the bottom tip of the pole. This wavy line will form the rope or cord used for hoisting the flag.

Step 8: Draw the base for the stand. Draw a second oval below the stand of the flag pole. With this, your flag outline is ready. All that’s left is to colour the flag. Colour the topmost section of the flag saffron, and the third section dark green. Colour the lines of the Ashoka Chakra navy blue. For the stand and the base, you can use shades of blue and green. While you’re at it, don’t forget to explain to your child what each colour stands for. Saffron stands for courage and sacrifice, white represents truth and peace, and green stands for faith and chivalry. The Ashoka Chakra stands for continuous progress.

Drawing the Indian flag has never been easier with this step-by-step guide for your child. Not only will it keep him engaged and guarantee a fun-filled time, but also instil a sense of patriotism in him, as he learns about the significance of each and every element of the flag.

Make Sure Your Little One Doesn’t Fall Ill With Seasonal Changes Coming Up – Follow These 12 Tips!

Befriending your Kids: Is It Easy?