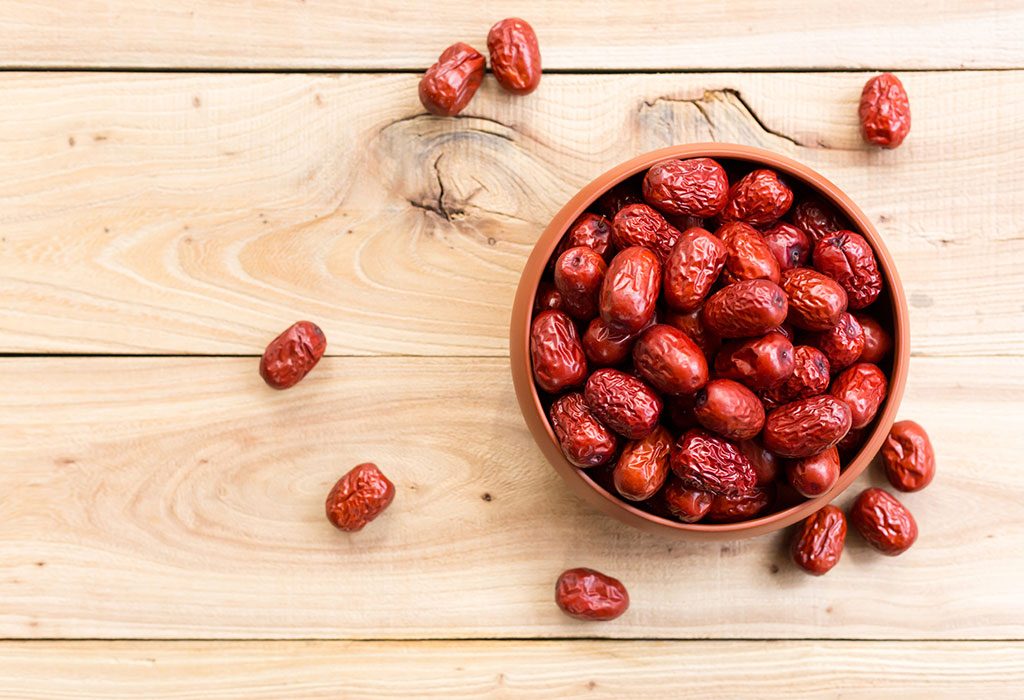 A pregnant woman has many healthy options when it comes to food. Fruits, vegetables, and milk become a necessity during pregnancy. There are many fruits that you can consume in pregnancy but many women view jujube berries with scepticism. Many women wonder if they can eat jujube fruit during pregnancy and whether it is safe for the baby. But there is no need to concern yourself as this fruit is safe to eat if consumed in the right quantity.

The tiny berries that resemble the jujube fruit are actually rich in a wide variety of nutrients, right from vitamins to multiple minerals. A bare 28g of jujube fruits tends to have a nutritional distribution as described below.

Consumption of the jujube berries can provide a ton of health benefits to the pregnant mother. Some of these are beneficial for the baby as well, bringing a double advantage of consuming them.

How To Consume Jujube Fruit While Pregnant

Jujube fruit can be consumed either in solid form or even as a juice by preparing it properly. However, before consuming it during pregnancy, you should unpeel its outer covering as the peel of the fruit is not easily digestible and generally stays in the intestine if consumed. Therefore, during pregnancy, it is recommended to unpeel the fruit. But the peel is quite rich in nutrients, so it can be separated and cooked in a stew to obtain nutrients from it as well.

Eating jujube fruits during pregnancy can be very beneficial for a pregnant woman, however, it should not be overconsumed. Eating more than 20-25 berries in a single go can actually impact the digestive system of your body in unintended ways. It can also lead to constipation which may worsen if the peel of the fruit is swallowed too. Women can also feel excessively bloated and suffer from hyperacidity after eating too many jujube berries in a single serving.

Pregnant women should take extreme precaution and eat only fresh jujube berries. These berries have a propensity for rotting, once exposed to the air and the microbes for a long duration. The rotting action results in the formation of acids and various substances such as methanol. If these are consumed by accident, the reactions it has on the body can range from mild ones such as dizziness and imbalance to even extremely toxic which could be fatal to the foetus as well as the mother.

Are There Any Side Effects of Eating Excessive Jujube Fruit while Pregnant?

There are no major side effects of eating jujube fruit during pregnancy if the fruit is fresh and is consumed in moderate quantities. But the fact that it has a number of nutrients in good quantities can be detrimental to the body if eaten in excess.

Iron, phosphorous, and calcium are essential minerals for the growth of the body as well as for the foetus. But if their levels are increased beyond normal, the overdose could cause major side effects ranging from insomnia to frequent muscle cramps and even a boost in the blood pressure of the mother. These muscle cramps can even affect the chest and cause a heart attack in rare cases. Similarly, the texture of the fruit itself could result in constipation in many women. Some incidents have reported an increased state of lethargy and fatigue after eating too many berries.

Indian jujube during pregnancy has its share of benefits for the pregnant woman as well as the developing foetus but consuming it in moderation is the perfect way to obtain its benefits without any risks.

Also Read: Can You Eat Blackberry during Pregnancy?