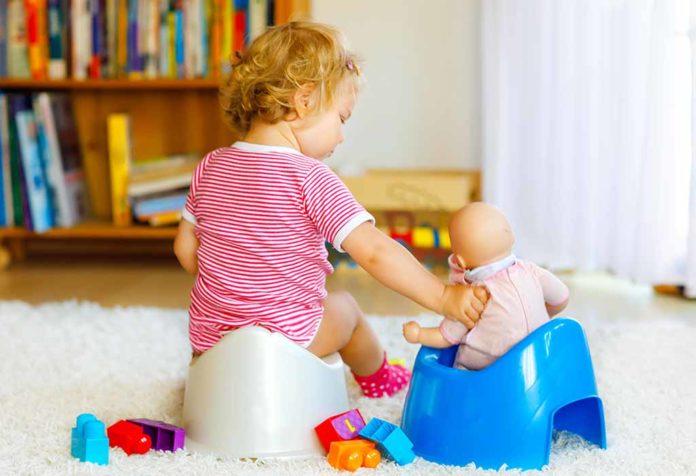 Potty training is something every mother worries about. I am a mother of two kids and they were potty trained by the time they were 1 year old. You must be wondering how?
So let’s begin.

1. When is the right time?
Whenever you as a mother feel you and your child are ready you can start with it. According to my experience, one can start with it when the child has good head support and when their spine is strong enough.

2. How I did it? A step-by-step process.
Every time I realised my child was going to poop in his diaper, I would hold him against my stomach in a squatting position. Gradually he got used to pooping in that position, and later he would ask me to hold him in that position as he would get very uncomfortable while pooping in his diaper.
Now when he started sitting, I would take him to the potty, and whenever he was about to poop I would make him sit on the pot.
It will be a tedious task in the beginning, but gradually when the child will be 8-10 months he will completely stop pooping in his diaper.

3. Take your time.
So I decided to potty train my kids really early, there are mothers who decide to do it later in life and definitely, it’s completely a mother’s choice but the only thing I want to add here is whenever you decide to go down that road, make sure you follow it through. Don’t get interrupted, don’t break the routine in the middle because that confuses the child.

Pee training is a bit tricky, but again I started with my kids really early. I timed his pee schedule and took him to the loo in a squatting position and make a hissing sound.
Every child has his pee schedule. My younger son had a schedule of 10 minutes after his feed. Then he used to take his nap. He didn’t pee during his nap. And as soon as he woke up, he would pee five minutes later, then ten minutes later again.
So by keeping an eye on the watch, I would take him to the washroom where he would pee.

And thankfully, now at 12 months of age whenever he wants to pee he says ‘mumma susu’.

I hope my experience helped you and I would really love to hear your feedback.
Thanks!

What To Expect At Week 8

Acupuncture to Induce Labour – Is It Right for You?

Conversation Starters to Teach Your Tot To Talk

30 Baby Names Inspired By Science for Boys and Girls