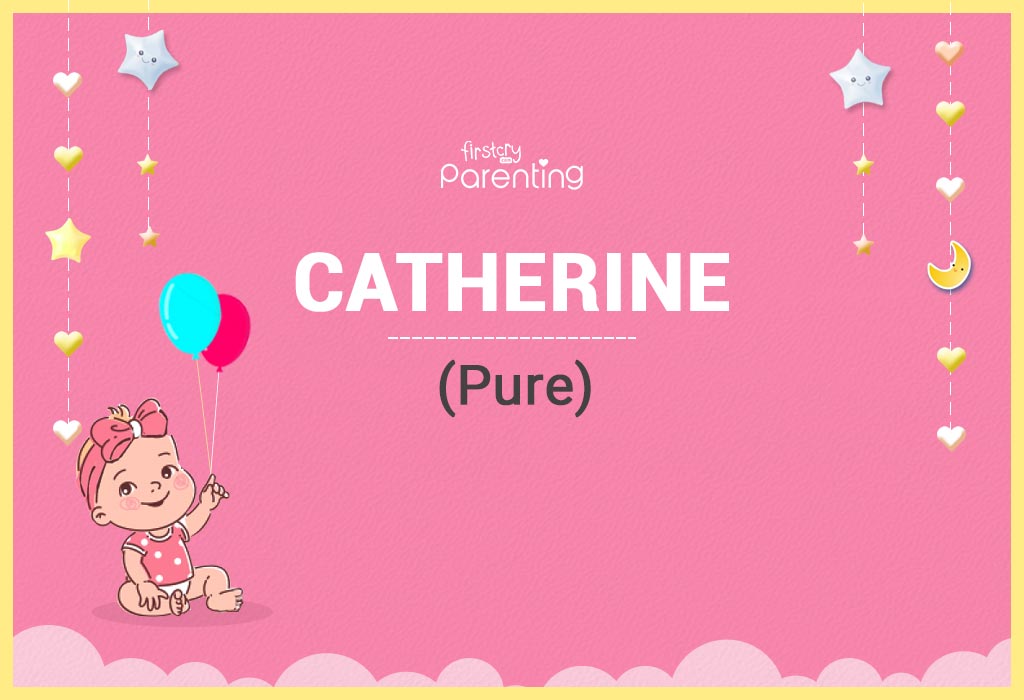 Popular among queens, saints, martyrs, and Shakespearean characters, Katherine means ‘pure.’ With roots in the ancient Classical period, the varied diversity of its spellings and feminine appeal makes it a popular choice among girls. Here, we have explored everything about the name to help you decide whether it is the perfect one for your newest little angel.

What Does Katherine Mean?

Katherine could have come from the Greek name Aikaterine or the goddess Hecate or been associated with the Greek word katharos, meaning “pure”- a desirable virtue. Later, the Latin spelling was transformed from Katerina to Katharina to reflect the early Christian era. Thus, Katherine’s most commonly known meaning has been identified to be “pure.”

Katherine comes from Aikaterine, the Greek word “katharos,” meaning “pure.” Since the third century, this regal name has been in use and has evolved from Katarina to Kathleen and Kaitlin. A semi-legendary 4th-century saint and martyr carried the name from Alexandria. Katherine was initially worshipped in Syria, and the returning crusaders introduced this name into Western Europe. After being popularly used in England since the 12th century, both Katherine and Catherine became standard in the later Middle Ages and are now regularly used in the English-speaking countries of the world. Katherine has been popularly used since 1973 in the US. Shakespeare’s play ‘The Taming of the Shrew’ has a character named Kate. Other literary namesakes include Katherine Anne Porter and Katherine Mansfield. Catherine of Siena, a 14th-century mystic, Catherine de Medici, a 16th-century French queen, three of Henry VIII’s wives, including Katherine of Aragon, and two empresses of Russia, including Catherine the Great, have been famous bearers of this name.

The cross-cultural and cross-national differences can give information about other spellings for Katherine. Here are some Katherine name variations that have their independent identity:

How Popular Is the Name Katherine?

Katherine has a profusion of spellings, short forms, and admirable namesakes that have been among the 100 most popular names since 1880. The Irish have favored the stylish Kathleen. The earliest version, Ekaterine, was prevalent in Ancient Greece, having originated from the name of a folk dance. Later, its spelling was changed under the Greek influence from the adjective katharos. According to Social Security Administration data, the Katherine popularity level has been waning in recent years. However, after remaining in the top 50 from pre-2000 to 2008 and in the top 100 from 2009 to 2016, the Katherine baby name ranking has secured a spot in the top 150 names for girls. This sophisticated name is more popular in the United States than in Britain, with personalities like Catherine of Aragon, Catherine, the Duchess of Cambridge, and Katherine Langford bringing it back to the limelight.

Search trend for the name Katherine has recorded a consistent score above 40 in the popularity scale over the last ten years, reaching 100 in January 2013. The lowest record of popularity through search was recorded in September 2021 at 36.

Interest in Katherine – US

Search trend in the US reached its peak up to 100 in January 2013. The lowest record value was 26 on the popularity scale in September 2021.

Popularity of the name Katherine

As per the global trends, Katherine has been searched the most in Australia, followed by the United Kingdom, United States, New Zealand, and Chile in the last ten years. Located on the banks of the Katherine River, Katherine is an important visitor gateway for the Northern Territory. Hence, this name has been most searched in Australia.

Search trends of Katherine in the US

In the last ten years, the District of Columbia in the US recorded the highest search value of 100 in January 2013. Following this, Massachusetts, Rhode Island, Vermont, and Connecticut make it to the top 5 positions in the US, where search trends for Katherine have been the highest.

Middle Names That Go With Katherine

A good middle name can steal the spotlight from the first name. Some of the double names with Katherine that can be picked for your beloved child:

Celebrities named Katherine have contributed to the name’s immense popularity, especially in the older days. Here are some options that may influence your baby name choice:

Non-sensical, funny, or weird nicknames are a great way of calling your child with the utmost affection. Here are some special nicknames that you can use to address your child in informal settings.

Nicknames create a new identity for your child and can be used playfully. Katherine has many creative and endearing nicknames that have made their way into the hearts of parents.