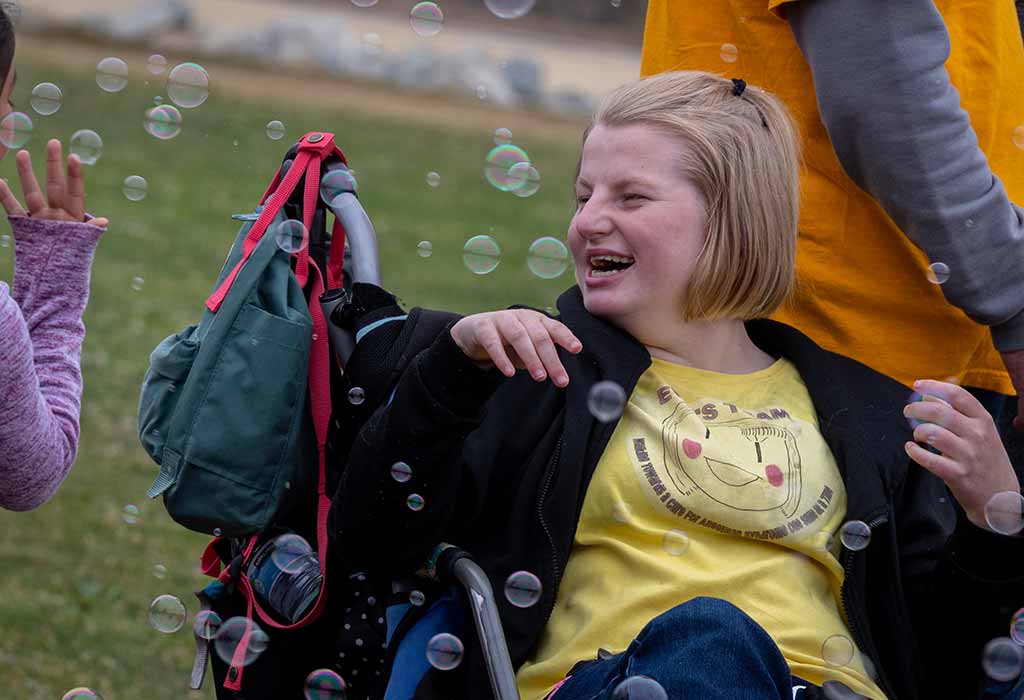 An uncommon genetic disorder, Angelman Syndrome, affects the nervous system. It causes severe delays in development, hinders balance and body coordination, causes learning disabilities, seizures, and other health issues. An Angelman Syndrome infant has a small head with a flat back. The earliest symptom noticed is a developmental disorder when a child is 6–12 months old. Other symptoms manifest later. It is an uncommon disorder affecting about 1 in 15,000-20,000 people.

What Is Angelman Syndrome (AS)?

An uncommon genetic disorder, Angelman Syndrome causes development delays. Symptoms develop during infancy lasting through a person’s lifetime. There have been some clinical similarities to conditions like autism and cerebral palsy – although the cause is different. The disorder affects the nervous system, causing developmental delays and affecting males and females equally. The key symptoms include speech impairment, movement and balance issues, seizures, and overexcited demeanor. The disorder derives its name from Dr. Harry Angelman, a British physician, who identified the first set of Angelman Syndrome symptoms in babies and children.

The disorder is caused by the lack of presence of the UBE3A gene or its inactivation. The leading causes associated with its absence are due to any of the below genetic traits:

About 75% of Angelman Syndrome is caused by the erasure of maternal chromosome 15, which contains the UBE3A gene.

In very rare cases, almost less than 1%, a portion of maternal chromosome 15 breaks away and relocates. It is another cause for Angelman Syndrome.

Two duplicates of genes are received from each parent in every human, other than the Y chromosome. Only one replica of the gene switches on to perform functions in some individuals, leading to a phenomenon called genomic imprinting. A rare few children inherit only a single copy of the UBE3A gene, which is functional. However, due to the defects in this phenomenon, the single UBE3A gene copy is turned off, which leads to Angelman Syndrome. It is common in about 3%-5% of the cases.

In certain instances, the child receives two copies of the UBE3A gene from the father than one from each parent. When two copies of parental chromosome 15 are obtained instead of one, the condition is known as parental uniparental disomy. If the child lacks the UBE3A gene, it causes Angelman Syndrome. This scenario occurs in 2%-5% of the cases.

Symptoms of Angelman Syndrome in a Child

Symptoms that are common and noticed for an Angelman Syndrome infant are all but not necessarily the below-listed behaviors or characteristics:

Angelman Syndrome symptoms in babies are first seen at 6-12 months. People with the syndrome lead normal life spans and can be independent enough to manage specific tasks.

A few complications associated with Angelman Syndrome are listed below:

Infants will have difficulty coordinating sucking and swallowing, making it difficult to feed since they may have trouble grabbing onto the nipples and swallowing milk. It may lead to malnourishment and deficiencies in nutrition and growth. Due to this, pediatricians may recommend formula milk with high-calorie content to gain weight.

Children with Angelman syndrome will tend to move from one activity to another with a very short attention span. They will also tend to put things in their mouths (especially toys and their hands). It does decrease with age, and medication is not always needed.

People with the condition have abnormal sleep patterns and wake up frequently while sleeping. They also need less sleep than most normal people. It does improve with age. Medication and behavior therapy can help alleviate sleep issues.

4. Scoliosis or bending of the spine

Some people with Angelman Syndrome develop a side-to-side bend which is abnormal over time. This condition can cause limited mobility and restricted movement.

Older children with Angelman Syndrome tend to have enormous appetites leading to obesity.

How Is Angelman Syndrome Treated in Young Children? 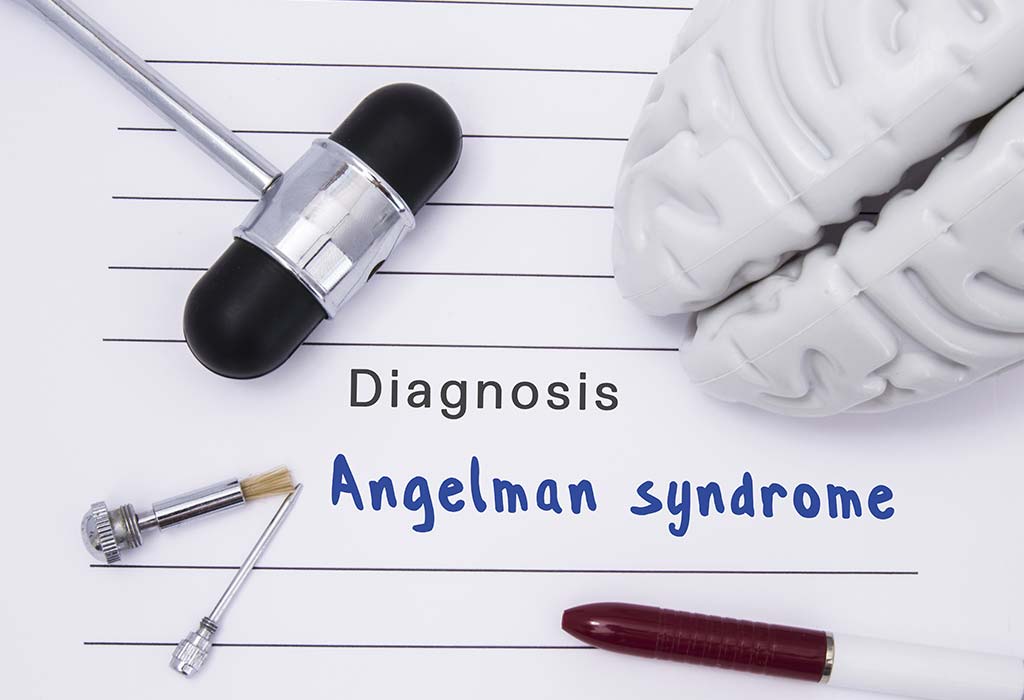 Most babies with Angelman Syndrome do not display any signs or symptoms at birth. The first signs of the syndrome generally appear as developmental delays between 6-12 months. The most common signs are the inability to crawl or babble. If your child seems to be showing this kind of delay at the age of 6-12 months, you must consult a doctor. Even if your child seems unable to latch on while breastfeeding or has irregular sleep patterns, it is advisable to consult a doctor.

What Is the Outlook of Angelman Syndrome?

Most individuals with Angelman Syndrome are expected to live as long as people without the condition. However, they may not be able to live independently and will need life-long care and support. Intellectual limitations, speech impairment, and lack of balance and coordination will continue to affect those with Angelman Syndrome almost throughout their life. There is a possibility that some could learn new communicative skills and adapt to different communication styles. Some problems like hyperactivity and sleep disorders could reduce with age.

The quality of life for both children and adults affected by Angelman Syndrome can be improved effectively if the symptoms are managed in a structured manner, implying the potential for a favorable Angelman Syndrome prognosis. Scientists are continuously researching the possibility of restoring the UBE3A function in the brain. The research is in its early stages, and no significant conclusion is arrived at yet.

Angelman Syndrome is a genetic disorder that can cause significant neurological problems. From sleep disorders to lack of balance in movement, it could affect a person’s ability to live independently. However, with adequate therapy, care, and management, individuals with the syndrome can lead normal and healthy lives. Some individuals can even find suitable employment where they can work under supervision. Several groups and organizations offer a support network for families, information on the latest available resources, and fundraising opportunities to increase awareness about Angelman Syndrome.

Dr. Harry Angelman, who first recognized the symptoms, noticed similarities between the symptoms and the topic of a renaissance painting that depicted a boy holding a painting that had a picture of a puppet. This prodded the physician to name the syndrome Happy Puppet Syndrome and that those affected always have a cheerful disposition and demeanor. The term is considered inappropriate and is not used any longer.

2. Can Babies With Angelman Syndrome Cry?

3. What Is the Lifespan of Individuals With Angelman Syndrome?

Spontaneous genetic events such as missing maternal chromosome 15 or parental uniparental disomy are not inherited circumstances. However, specific mutations in the UNE3A gene or mutations in genes that control or influence UBE3A gene activation could be inherited. Only 3-5% of cases of Angelman Syndrome account for the inherited category.