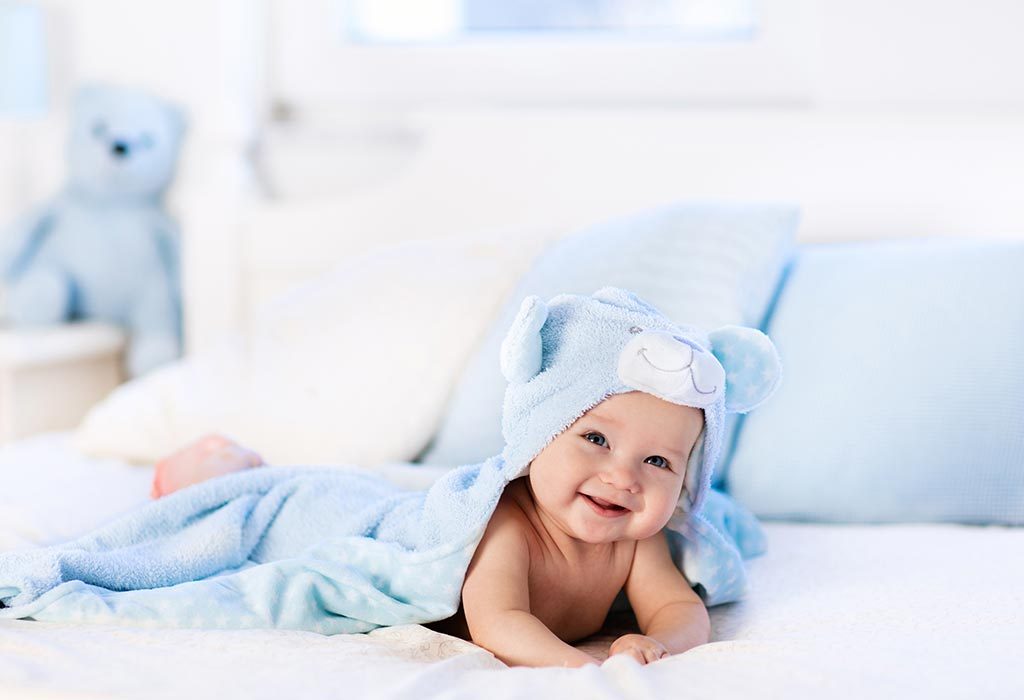 There’s always a story behind a person’s name! And naming a newborn is one of the first duties of parenthood. Unusual baby names are often more exciting than traditional, common ones. Bursting with character and style, these names attract attention and make a child popular. Weird but cute and strange boy names just don’t define a child’s individuality but can also help him feel special. However, it is necessary to understand the meaning of your baby’s name before finalising one. Here is a handpicked list of the weirdest boy names ever that would make people scratch their heads as soon as you call out for your boy.

List of Strange and Weird Baby Boy Names With Meanings

Here are some totally bizarre examples of weird but cool boy names with their meanings that would inspire you to name your little munchkin.

Abner is an unusual name for boys and means ‘the father of light’. Originating from Hebrew, it is coming from ahv (father) and ner (enlightenment).

This name has its roots in Greek mythology, and means ‘of the Earth’.

This name has its roots in old German and means ‘noble ruler’.

A variant of the name Amory and the Latin name of the Roman god Cupid, Amor means ‘love’ in Spanish and Portuguese.

Atlas is a Greek name which means ‘to carry’.

Axel is an unusual name which means ‘keeper of peace’.

Axton is an English name which means ‘sword stone’.

Aydin is an uncommon Turkish name which means ‘bright’ or ‘clear’.

This Arabic name of Hebrew origin means ‘lightning’. In the Old Testament, Barak was an Israelite general.

Basil means ‘royal’ and ‘brave’. This name originates from the Greek name Vassilios, and Bas means ‘fearless’ in Arabic.

This name has English origins and means ‘from the grass meadow.’

This is a name with British origins and means ‘someone who’s passionate about books.’

This is an unusually good name. It means ‘blessing’.

Brantley is a name that would be perfect for your strong-headed one. It means ‘fiery torch or sword’.

Bruin is a Scandinavian name which means ‘bear’ or ‘brown’.

Cary is a name of English origin, and it means ‘pure’.

Crew is a Latin name which means ‘chariot’.

Pronounced as Koz-mo, this British or Italian name means ‘order’, ‘decency’, and ‘beauty’. The Greek name Kosmos has an astronomical flair to it.

This is a beautiful Latin name which means ‘horn’.

Dakarai is an African name which means ‘happiness’, which your baby will definitely to bring into your life.

This French meaning of Delano is ‘from the marsh’. Derived from the word ‘de la nuit’, meaning the night, this name is suitable for children born during the night.

Dex is a strong Latin name which means ‘skillful or dexterous’.

Originating from Hebrew, Enoch means ‘the dedicated one’. In the Bible, Enoch was the eldest son of Cain and the father of Methuselah.

This English name has a Greek origin, and it means ‘fruitful’, ‘fecund’ or ‘he who is well-developed.

Faron comes from the name Fairmont and means’ handsome servant’. It has French and English origin.

Meaning ‘companion’ or ‘wandering man’, it comes from the Old English word ‘gaedeling’ and the Old High German’ gateling’.

Golden is an English name which symbolises ‘honesty’ and ‘authenticity’.

Gray is a very unusual but cool name. It symbolises the colour gray.

This name of French origin means ‘to lead’ or ‘guide’. Derived from the Hebrew’ goy’, it means ‘valley’ in Hebrew, ‘life’ in Latin.

Derived from the Greek word ‘genesis’, the English has adopted the Latin meaning of this name which means ‘origin’ or ‘creation’.

Based on the Anglo-Saxon word, Heathcliff means ‘wasteland covered with heather’ or ‘cliff near a heath’.

This habitation name is derived from a place in Gloucestershire which comes from Old English hunta or ‘hunter’ or ‘the hunt field’.

Derived from the Hebrew name Yohanan, or Scottish Gaelic Iain, Ian is an anglicised version. Its Scottish meaning is ‘the Lord is gracious’.

This uncommon name is of Spanish origin and means ‘God is my salvation’. Originating from the Hebrew name Isaiah, it is used in some versions of the Bible.

Originating from Hebrew, this Biblical name comes from Jahzeel. Jaziel means ‘allotted by God’ and can have the stylish nickname Jazz.

Kash is a very unusual yet trendy name. It means ‘money’.

Kenzo has a Japanese origin which means ‘healthy and wise’.

This Greek baby name means ‘carrier of Christ’. In English and Latin, the meaning changes to ‘from the Roman camp’.

This is a lovely name for the ruler of your heart. King is derived from an old English term which means ‘tribal leader’.

Knox is a Scottish name which means ‘around the hillock’.

Kylen is a great choice for a baby boy and it means ‘narrow’ and ‘straight’.

This name is a beautiful one and symbolises ‘peace’ and ‘tranquility’.

Derived from English origin, Ledger means ‘Spear Tribe’. The name Ledger can be traced back to the anglicised version of Leger.

Based on the Anglo-Saxon word loc (enclosure) and the Middle English word wald (forest), Lockwood is a weird name which means ‘forest near a fortified place’.

Lyle is a great name to consider and means ‘an island’. It has English origins

This name of American origin means ‘independent or non-conformist’. Maverick might just set his own rules in life.

This English name of Latin origin means ‘greatest’. Mack, Mac, or Max can be good nicknames for Maxton.

This name of Hebrew origin is also a biblical name, and it means ‘pleasantness’, ‘charm’, or ‘tenderness’.

This baby name is of Greek origin, and it means ‘river valley’ and ‘champion’. A variant of Niall and Niles, Nile is considered to be a gift for the people of Egypt.

This Aboriginal name refers to the ‘precious black gemstone’. The original Greek meaning of this name is ‘nail’, or ‘claw’.

Ogden is a name of English origin, and it means ‘from the Oak Valley’.

A name of Greek origin meaning ‘dark red’, Phoenix is the name of a mythical bird that is a symbol of immortality.

This name of Hebrew origin means ‘dark-skinned’. In the Bible, Pinchas was the son of Eleazar.

This name has an Old French origin, and Quincy means ‘estate of the fifth son’.

This name of Arabic origin means ‘one who is content with himself’.

This name of English origin means ‘son of the king’. Royce represents the pinnacle of extravagance.

This name of Egyptian origin means ‘the sun’. Your son Ra would bring sunshine and happiness into your life.

Based on the name Silvanus, Silas has a Latin origin, and it means ‘wood or forest’. Derived from Saul, its Hebrew meaning is ‘the youngest’.

Talon is an English name and signifies a sharp mind and strong and fierce in nature.

Titan is derived from Greek mythology and means ‘defender’.

This unusual name means ‘gazelle’ in Hebrew. This unique name might be the right one for your newborn.

An Italian name of Germanic origin, Ubaldo means ‘of a bold heart and mind’.

Meaning ‘war-like’, or ‘battle’, Viggo is a name derived from the Old Norse name Vigge or the German name Ludvig.

This name of Bosnian, Russian, and Slavic origin means ‘ruler’.

Waylon has an English origin, and it means ‘land by the road’. The English adopted this name from the Scandinavian settlers and anglicised it to Wayland.

This name of Arabic or Malay origin means ‘beloved’. A wonderful and different name for your little one!

Wesson is a unique version of Weston and means ‘from the Western town’.

Wilder is an English name and is a charming one for baby boys.

Wolf is a strong and fierce name which will be apt for your little one.

Originally a Chinese surname, Xu means ‘brilliant rising sun’ or ‘from the ancient land of Xu’.

This name of African origin means ‘studious’. This beautiful name could be perfect for your baby.

This name has a Lebanese origin and refers to the precious stone ‘jade’. The same name also has a Kurdish origin, and it means ‘remembrance’.

This Biblical name of Hebrew origin means ‘rock’ or ‘strength of God’.

This name of Hebrew origin means ‘the highest point’. It is also the Biblical term for ‘the promised land’.

This name of Arabic origin means ‘victory, success, triumph’. It is a variant form of the name Zayd.

Zen is a name of Japanese origin and it means ‘at peace’.

Hope this list of baby names with really weird boy names will assist you with ideas that are beyond the norm. Remember that your creative choice of a baby name can be refreshing to hear and leave a lasting impression wherever your child goes.