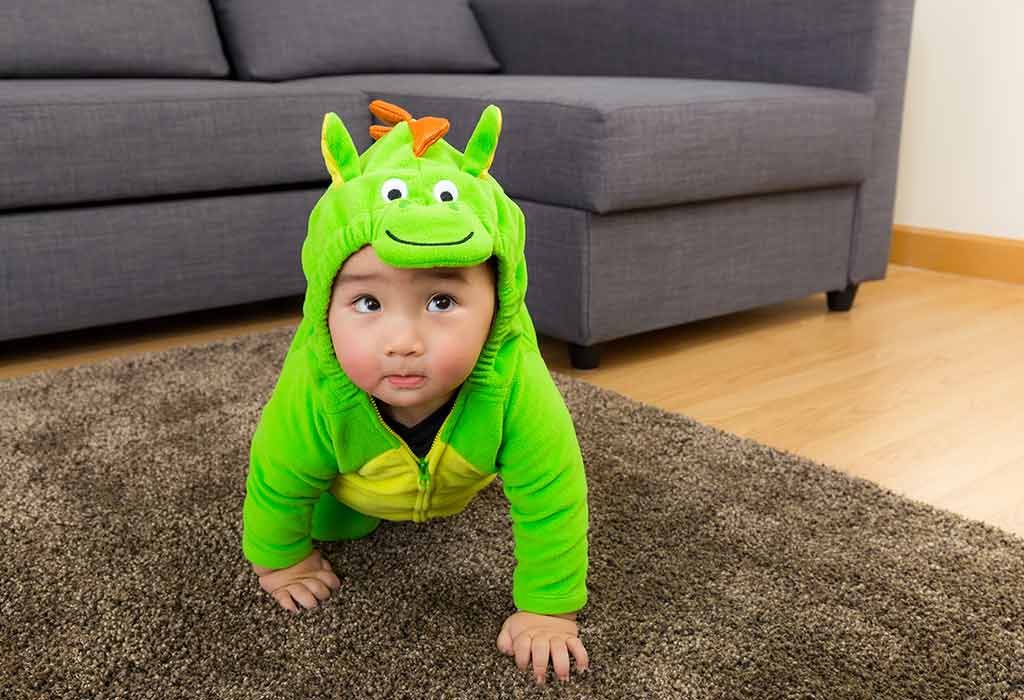 Dragon names are considered auspicious in many cultures. If you are looking for dragon names for your newborn boy or girl, then here is a list of dragon names to choose. A symbol of immense power and strength, these dragon names are sure to be apt for your baby who will grow up to be healthy and mighty.

In the Orient, dragons are believed to have potent, auspicious powers. It is a symbol of immense power and strength. Finding names for our babies is quite a mentally daunting task. Below is a list of both boy and girl dragon names; we hope that you will find the one that suits your adorable baby best.

We have compiled a list of boy dragon names. Choose the one from this list of male dragon names for your bundle of joy.

Aiden is an intriguing name with Celtic roots. It means little fire.

This name originated in Latin America. It was then also used by parents of Scottish descent where it changed to Angus. It is a name that denotes excellent strength.

Apalala is a unique-sounding name, part of Buddhist mythology. Apalala is a water-dwelling dragon.

Arad originated in Persia, and it is a Muslim boy’s name. This name means the Name of an Angel.

Belindo is a Germanic name meaning dragon. This could be a good choice for your little boy’s charming personality.

Another from Germany, this dragon’s name means fire. If your little boy has a fierce personality, giving him this name could be ideal.

For your son’s fiery and charming personality, Brenton is an option we would like to present. The name means flame and fire.

The meaning of the name is one who understands the ways of a dragon. Doryu is a boy’s name that originated in Buddhism.

It is another boy name that means dragon. The name originated as an Italian boy’s name. In Italian the word Drago means dragon. Over time the letter g in the word drago was softened into a C, hence changing Drago into Draco.

This boy’s name shows an excellent ability to understand. It is an English name, and historically it is a modern variant of the drake dragon.

Well, this name does not need much of an explanation, right? The dragon’s name refers to the devil.

Drake is an English name. People with this name are caring and crafty. They have the ability and power of both dragons and serpents.

A mighty name for your baby boy! It originated in Greece. Boys with this name have a strong desire for a stable family or a community. They also need appreciation by working with others.

Drayce is a rare name. Boys called Drayce are leaders; they are independent; not afraid to explore new avenues in life.

Fafner is a Norwegian name. Boys with this name are excited by change. They are dynamic and versatile. They also tend to be quite optimistic.

The name George comes from the Christian religion and refers to the knight who slew a fire-breathing dragon. George also means farmer. St George is also the patron Saint of England.

This name implies an empire dragon. Its roots are in Israel, and it is a biblical name.

A boy’s name that means a kind of dragon. Indian Hindu astrologers have defined this name as someone who is born with a star.

Ju-Long is of Chinese origin, and it means that the person called Ju-Long is big and powerful as a dragon.

It is an Arabic name that refers to the Gabal Elba Dragon Tree. This name can be used both for boys as for girls. Khuzaimah is an Urdu originating name and has adopted different meanings in the Muslim world.

A Greek boy’s name that denotes influential personalities. We focused boys with this name on their goals, and they work on setting new ones.

This name is of both Chinese and Vietnamese origins. In both cases it means dragon.

These boys are very hard working; they push themselves to finish their projects. They are efficient people and exhibit a down-to-earth approach.

It is a Norwegian name for a boy. Similar to other names that mean dragon, this name shows powerful leadership skills.

Nithe is a cute Old Norse version of dragon and serpent – a unique and eccentric name.

Oboth is a Biblical baby boy’s name. These boys see and love the beauty around them, and they respond very well to it. These boys need harmony and balance in their lives.

Ormr is a Nordic version of a dragon.

This name is an Anglo-Saxon baby’s name. These boys are excellent at speaking in public places. They are very orderly, and they have strong values for justice and discipline.

The name Ryu means dragon and is of Japanese origin. It is, however, also used in English speaking countries. The history of Ryu is full of fascinating Japanese mythology.

The name Tatsuya is also of Japanese origin. These people enjoy achieving their goals. Boys that are called Tatsuya possess the intelligence and longevity of the dragon.

For your strong-willed and good-tempered child, Tyson could be an option. It means fierily tempered.

This Japanese boy’s name is highly associated with wealth and abundance. These boys are calm and stable. They could also be secretive.

How about some Aztec mythology? This Aztec name means fire serpent.

This baby boy’s name originated in Korea. It is not a very common name. These boys are very hardworking and worldly. They are also protective of their family and the ones they love.

Below are some of the top, trending female dragon names for your little girl: Give your modern child some modern-ish name like Aine! Aine is a dragon name for fire and splendour.

This dragon’s name implies bearer of light. If your little girl has an optimistic character and cheery personality, then this could be the perfect name for her.

This girl’s name is the female version of the name Anguis. Girls having this name prove to have strong character traits.

If you are looking for a dark name for your child, you can try Apep. This name relates to the Egyptian god of evil and darkness and means to slither.

Celtic names are quite meaningful and popular. One such Celtic name for dragon lovers is Brenna which means blazing light.

A girl’s name of Native American origin. Its meaning can be traced back to a mythological serpent-like dragon.

Name referring to a dragon flower; as beautiful as your daughter.

An English name meaning Lady of Light or Lady of Hope. The word Dae has American origins and means light or hope while the Welsh Nerys means lady. An original name for your little girl.

It means she-dragon. The way it is written is the Latinized form of the word in Greek drakaina which also refers to a type of tree and succulent shrub.

This name is of Bhutanese origin, and it refers to the Thunder Dragon. Girls with this name are usually prone to be of great help to others. They also have a loving outlook on life.

Edna is a Hebrew name for a fiery red. If your daughter has a strong and determined character, Edna could be the perfect name for her.

Georgina is the female version of the name George. It refers to the medieval legend when a farmer slew a fire-breathing dragon. St George is also the Patron Saint of England.

A variation of this female name is Hadria. This name refers to the multi-headed water dragon. People with this name have a greater desire to use their inner abilities.

Girl’s name meaning Little Dragon. This name originated from Japan which is suitable for our little love.

This name originated from India. It is a girl’s name, and it means the killer of a thousand-headed dragon.

Khaleesi is a popular name adapted from the world-wide famous fictional series – the Game of Thrones. The name means mother of dragons.

It is an Arabic name that refers to the Gabal Elba Dragon Tree. This name can be used both for girls as for boys. Khuzaimah is an Urdu originating name and has adopted different meanings in the Muslim world.

A unique and sophisticated girl’s name of German origin meaning Dragonfly. It is a very stylish name that could also be shortened to Belle and Lee.

Malinda is a sweet name, just like its meaning. This Old Greek name means sweet serpent.

This name has Greek and French roots. Girls with this name show the same braveness and uniqueness as one can see in dragons!

A girl’s name, which gives your baby a responsible nature.

Something dark? Mindy is the one! This dragon’s name means dark serpent.

A name coming from the film A Game of Thrones, Rhaenys rides the dragon. An inward glance to this name suggests a genuine and cheerful girl.

Sylla the dragon monster of Greek mythology. A five-act tragic opera was composed about this creature in 1746.

Girls with this name are very charming and protective towards the ones that they love.

This French name will give your girl positive, generous and good=natured character traits.

In Japan, this name means a female dragon. A strong name for your angel’s face.

In Babylonian mythology, this name meant the personification of the sea. It signifies a dragon that gave birth to the first of the gods. It is an excellent choice for your bundle of joy.

It is a girl’s name originating from Japan.

Another girl’s name meaning dragon. Hence it portrays characteristics of strength and leadership.

Although this name is listed as a girl’s name, it is also used as a name for boys. This name is of Aztec origin, and it refers to a serpent-like dragon.

A Korean girl’s name that can also be used as a surname. The Chinese define it as brave.

Below are some unisex dragon name for your little one:

This a spectacular unisex dragon name which means slayer of demons.

Azar, in Hebrew, refers to flame.

Blaze is a commonly known English name referring to flame or fire.

Boruta is a polish dragon name which means to fight. The name is derived from Slavic mythology.

Brande is a unisex Czech name meaning a dweller of a burned clearing.

Chance is an optimistic name meaning good fortune or luck.

Devlin is an unusual and unique name of Irish roots. It means unlucky.

Ember is a French word for slow-burning or spark.

Isuel is a Korean name for someone morning born or morning dew.

Knucker refers to a water dragon. The name originated in Old English and can be used for both girls and boys.

Orochi is a Japanese dragon name for a big snake.

Pachua is a Native American reference for a feathered water snake.

Reese is a popular unisex name of Welsh origin. This dragon’s name means born of fire.

Scylla comes from Greek mythology. In that mythology, the name means sea serpent.

Tatsuo is a bold name. This dragon’s name means the imperial man.

Valryon is a popular fictional dragon character owned by the Targaryen family in the popular series The Game of Thrones.

We hope this list of names will help you pick the right name for your precious little one. Good luck and happy parenting!