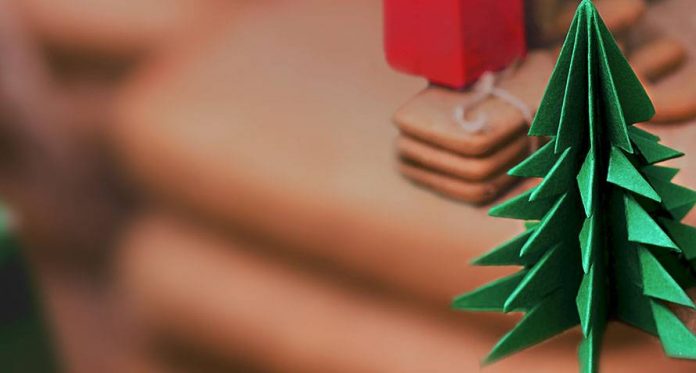 The closer we get to Christmas, the more expensive decorations become! But what’s December without a nice and bright house, full of cute ornaments on the tree, down the windows, and up the walls? If you’re already losing your calm planning for Christmas presents and parties, while trying to keep your kids busy, we have the perfect solution!

Here are the top 6 origami craft ideas that are easy to make, easy to source, and beautiful to behold! Not only will these origami crafts keep your children occupied but you’ll also end up having a wonderfully festive if a little messy, house!

Dashing through the snow comes Santa! Tell the kids they must ensure his feet are nice and warm. This easy foldable Santa boot achieves just that! Follow these origami Christmas ornaments instructions to make as many pairs as needed for your Christmas party. After all, there will be many little Santas who will need them!

Think Christmas and a world full of bobbing red hats come to mind! Christmas hats are the life of every party and you can now make them at home. The steps closely resemble the paper boats that we all remember making every monsoon. Guide your kids through its easy procedure and you’ll soon see the living room transform into a hat-making factory!

Have you already bought a big Christmas tree for the party but the kids want ones for their rooms as well? Help is at hand! All you need to figure out is how to make an origami Christmas tree and you can make as many as you need, as big or small as suitable! These also look terrific when you put them up as window and door decorations. Just follow the given steps and you are good to go.

Christmas is here but there’s no snow! But you can still create a beautiful winter indoor with these easy snowflakes. This 6-step process involves cutting with scissors so make sure you oversee the craft. Once done, these snowflakes can be suspended from the ceiling, arranged near windows or decorated on the table. They are also a great idea for origami Christmas cards– nothing like a handmade card, right? You can also intertwine them with fairy lights for a stunning origami Christmas lights display. It’s a cold Christmas…brrr!

Christmas tree is one of the highlights of the winter festival celebrated all over the world. How come, we make origami crafts and do not create paper Christmas trees? This year, involve your kids in the craft of making Christmas trees on paper, which is very easy to make.

Reindeers are every kid’s joy. This easy craft is a popular among many to make during the time of Christmas. Let’s take a look at how to make the easy-peesy Christmas reindeer bookmark.

Let’s share craft ideas and delight this Christmas – after all, it’s the season of sharing!

How to Solve Your Toddler’s Color Differentiation Problems