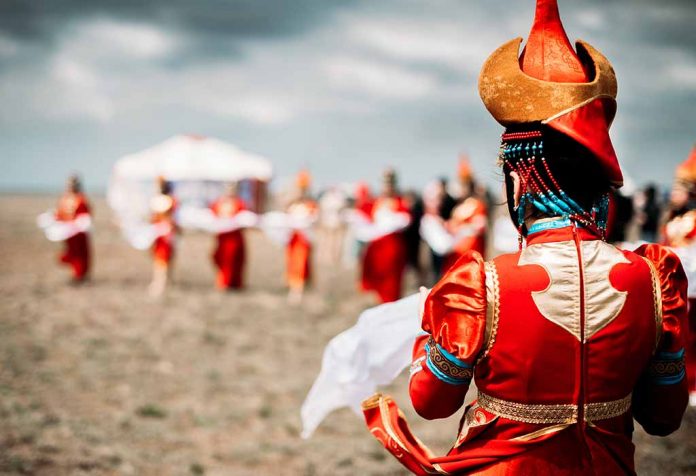 Mongolian names are traditionally connected with auspicious connotations and are thought to bring good fortune to the bearer of the name. Read on to find the top 100 Mongolian names for boys and girls with their meanings.

Mongolian names often have Turkic, Mongol, and Russian elements, as well as influences from Buddhism. Here we list some Mongolian names for boys and their varied origins and meanings.

Means ‘golden’ in Mongolian and ‘red dawn’ in Turkish. A variation of the name ‘Altin’.

This name is synonymous with ‘hero’ or ‘heroic figure’.

One of the most common names of Mongolian origin, Bat-Erdene means ‘Strong Jewel’ or ‘Strong Gem’.

The name means ‘a loyal and firm individual’. It was the name of a 13th-century Mongol leader, Batu Khan.

A very common Mongol name, it means ‘intelligent of wisdom’.

Refers to a Blue-grey wolf who was an ancestor of Genghis Khan, according to the legend.

It is a simple name meaning ‘baby’.

Also known as ‘Chingis’, this name means ‘great and wise one’. It’s a variation of the name ‘Genghis’.

A name primarily of Buddhist origin, it means ‘blessings from God’.

It was the name of a 20th-century leader of Mongolia, Choibalsan Khorloogiin.

Of Russian origin, the name means ‘prosperous’ and ‘abundant’.

Of Turkish origin, the name translates to ‘fortress’, symbolising strength.

This name represents ‘Tnigri Great God of the Door’, an ancient Mongolian name.

The name means ‘plentiful’, ‘bountiful’ or ‘generous’ in Mongolian. It’s of Turkish origin.

This name means ‘the calm and peaceful one’. ‘Enkh’ meaning calm and ‘Amgalan’ meaning peaceful.

The name reiterates the values held by Mongolians. It means ‘calm-hero’.

A name which signifies strength and persistence, ‘Erkhem’ means ‘important’ or ‘supreme’ and ‘jamts’ meaning ‘rock’.

Of Chinese origin, ‘Gan’ translates to ‘steel’ or ‘drought’ in Mongolian.

The name means ‘steel fate’. It is derived from ‘Gan’ meaning ‘steel’ and ‘zaya’ meaning ‘fate’ or ‘destiny’.

Meaning ‘prominent’ or ‘distinguished’, the name finds its origins in China and is influenced by Taoism.

The name means ‘brave steel’. It is a very common and traditional Mongol name, derived from the two names ‘Gan’, meaning ‘steel’ and ‘zorig’, meaning brave.

Derived from the word ‘Ivan’, which is Russian for ‘John’, and ‘jav’ which means ‘deliverance’, the name signifies the Russian influence in Mongolia.

It is a common name meaning ‘happiness’ in Mongolian.

Means ‘The son of Genghis Khan’, a traditional name that carries strength.

A very common Central Asian name of Turkish origin, it means ‘nobleman’ or ‘ruler’. It is now a very widely used name.

Literally translated to ‘a fearsome dog’, it refers to a guard dog that chases evil spirits away, according to a legend. It originates from the legend of the Chinese ‘stone lions’. In other Mongolian dialects, it translates to ‘archer’.

The name means ‘not human’. It is an unconventional Mongolian name and was traditionally given to children to mislead and confuse evil spirits.

Traditionally meaning ‘warder’ or ‘armour’ in ancient Mongolia, this was one of the names borne by those belonging to the warrior clans.

The name originates from the Northern Yuan Dynasty. It means ‘playful’, but is also often interpreted as ‘someone who is easy-going’.

Female Mongolian names often consist of words with positive connotations. They commonly refer to fine colours, the sun and moon, and also flowers. There is also a commonly practised tradition where children are given names with unpleasant qualities to mislead ‘evil spirits’ that may seek to take the child from them. In this list, we will go through 50 Mongolian baby girl names along with their meanings and origins.

Of Turkish and Mongolian origin, the name means ‘golden ornament’.

This is one of the most common names for baby Mongolian girls. It means ‘golden flower’.

The name is derived from the ancient Mongol words ‘amar’ meaning ‘bliss’ or ‘comfort’ and ‘jargal’ (in Mongolian ‘zhargal’) meaning ‘happiness’.

Meaning ‘Mother nature’, the name is derived from the Mongolian word ‘Bajgal’ which means ‘nature’.

Refers to ‘strong flower’, this name is a very common Mongolian name that signifies ‘strength and beauty’.

Derived from the word ‘Bayan’, this name means ‘wealth’ or ‘riches’. Babies were often given this name in the belief that it would bring good fortune to the bearer.

Meaning ‘crystal mother’, the name is a combination of the Mongolian word ‘bolor’ meaning ‘crystal’ used with the suffix ‘-maa’ which is of Tibetan origin, and means ‘mother’.

The name originates from the ancient Mongolian word ‘chimeglel’ which means ‘embellishment’ or ‘decoration’.

Originates from Turkish, this name means ‘full’ or ‘complete’

It is a common Mongolian name meaning ‘Different one’ or ‘not this one’. It is derived from the word ‘ene’ meaning ‘this’ or ‘that’ and ‘bish’ meaning ‘different’ or ‘other’. This name is traditionally believed to mislead evil spirits.

Of Tibetan origin, the name means ‘peaceful mother’ or ‘mother of peace’.

The name means ‘Gorgeous deer’. It comes from the words ‘gua’ meaning ‘gorgeous’ or ‘alluring’ and ‘maral’ meaning ‘deer’.

Mongolian for ‘happiness’ or ‘joy’.

This name refers to ‘red deer’ in ancient Mongolian.

Derived from the Mongolian words ‘khishig’ which means ‘grace’ or ‘blessing’ and the Tibetan word ‘maa’ which means ‘mother’, the name translates into ‘mothers grace’ or ‘mothers blessing’.

The name comes from ‘Margad’ which refers to ‘emerald’ and ‘erdene’ meaning ‘gem’ or ‘jewel’.

Meaning ‘eternal’, this name is often used as the first part in compound names.

The name means ‘eternal joy’. ‘Monkh’ refers to ‘eternal’ and ‘bayar’ means ‘joy’. A variation of this name, which is also common, is ‘Munkhbayar’

The name is from the Mongolian script for ‘lazulite’. It’s an ingredient used in making the precious stone ‘Lapis’.

A name is thought to bring great luck and fortune to its bearer due to the words ‘nomin’ meaning ‘lapis’ (a precious stone) and ‘zol’ meaning ‘fortune’ or ‘luck’.

The name is derived from the ‘Onon’ river that runs through Mongolia and Russia.

A popular name, she was the princess of the Mongol empire. Another variant of her name is ‘Ergene Khatun’.

The name is derived from the words ‘oyun’ meaning ‘wisdom’ and ‘chimeg’ meaning ‘embellishment’ or ‘decoration’.

Originating from Turkish, this name means ‘key to the mind’ or ‘key to wisdom’.

The name is a combination of the words ‘Saikhan’ meaning ‘beautiful’ or ‘handsome’ and ‘bayar’ meaning ‘joy’.

The name refers to ‘good fortune’. It comes from ‘Saikhan’ which means ‘good’ or ‘nice’ and ‘zaya’ which means ‘fortune’ or ‘fate’.

The name has a Mongolian origin, and it means ‘moonlight’.

Derived from the river ‘Selenge’ (also known as Selenga), which runs through Russia and Mongolia. The name stems from the Mongolian verb ‘seleh’ which means ‘to swim’.

‘Soyol’ refers to ‘culture’ or ‘art’ and ‘maa’ refers to ‘mother’. This name means ‘mother of culture’.

The name comes from the words ‘Suvd’ meaning pearl and ‘chimeg’ which means ‘ornament’ or ‘embellishment’.

Commonly used for both male and female babies, the name means ‘calm’ or ‘serene’.

The name is derived from the Mongolian words ‘tsog’ meaning ‘embers’ or ‘glory’ and ‘bayar’ meaning ‘happiness’ or ‘joy’.

Meaning ‘serenity’ or ‘clarity’, it is another popular Mongolian name, which has Mongolian and Turkish roots.

‘Tüm’, which is of Chinese origin, is the modern Mongolian word for ’ten thousand’. It signifies the strength of 10,000 soldiers.

The name translates to ‘light of dawn’. In Mongolian, ‘uuriin’ means ‘dawn’ and ‘tuya’ means ‘ray’.

In original Mongolian, this name means ‘crack of dawn’. In modern scripts, it translates to ‘aurora’.

Originating from China, this word means ‘primrose’ or ‘pasqueflower’.

This name is a variant of ‘zolzaya’, meaning ‘fate’ or ‘destiny’.

Mongolian names have undergone a plethora of changes over the course of time, with both the meaning and origin of the languages. Through these names, we recognise the rich culture and influences from all around Mongolia and take notice of their fascinating meanings and cultural roots.

Tips to Get Your Baby to Sleep in a Bassinet

7 Spooky Ideas To Enjoy Halloween With Your Kids

Working From Home During the COVID-19 Crises – Double Duty for Mothers!

My Life, Price Less Gift and Love You Maa