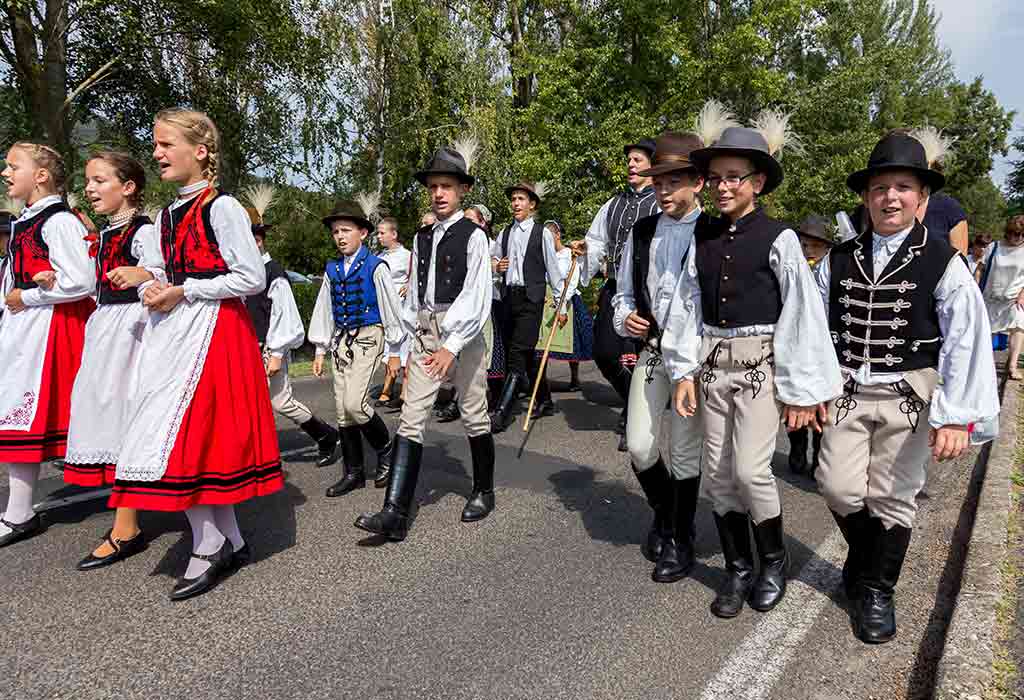 Named after princess Saint Elizabeth of Hungary, Erzsébet is derived from the Hebrew name Elisheba which means ‘God Is My Oath’.

Enikő, in Hungarian lore, was the mother of Hunor and Magor. Its variants are Enéh or Eneth, and it means a ‘young hind’ or female deer.

If in need of a Hungarian version of the name Ursula for your daughter, go for Orsolya, meaning ‘bear cub’ or ‘she-bear’.

Have a need for the Hungarian version of Sophia? Select Zsófia, which means ‘wisdom’.

Boglárka means either ‘jewel’ or ‘buttercup’.

Cherry-pick Ildikó, which means ‘fighter’ for your little daddy’s girl.

Margit is named after the Byzantine empress Margit of Hungary. A variant of Margaret, Margit has a Greek origin and means ‘pearl’.

Katalin has variants in Catharine and Catharyn and comes from Greek Katharos, meaning ‘pure’.

If you are hunting for feminine versions of the Latin name Laurus for your child, decide on Laura, meaning ‘laurel’.

It is one of the female names that represent the early spring goddess, sunshine, growth, etc. Maja means ‘the deity of spring, heat, and increments’.

Variants of Maria or Mary, Maria is derived from the Roman name Marius. It is the Latinised form of the name of Miriam-Mary, mother of Jesus. Maria means ‘of the Sea’ or ‘bitter’.

Discovering a shortened form of Elizabeth, single out Lilla, which means ‘pledge of God’.

In quest of nice names for your daughter, notice Lara, meaning ‘friendly and fragile’.

If you are searching for names to help your child face danger, discover Bernadetta, meaning ‘fearless’.

When choosing baby names for girls, a shining example would be Daniella, meaning ‘judgement by the Lord’.

When singling out names for young ladies, go for Rozina, which means ‘the rose flower’.

Segregating names based on the aristocracy, opt for Adel, meaning ‘noble’.

Making decisions for your daughter’s name, settle for Csenge, meaning ‘to ring’ or ‘to clang’.

Dana, a Celtic deity of fertility, means ‘God is my judge’ or ‘arbiter’ in Hebrew.

If you are separating female names connected to Dora, select Dorina, meaning ‘reward’ or ‘gift’.

When deciding saintly female titles, opt for Zselyke related to mystics. It means ‘river’ or ‘brook’.

Derived from the Turkish Arikan, Reka is a Hungarian name that has evolved from Kreka or Rekam. Reka was the fabulous first spouse of the Hun ruler Attila.

When making up your mind on fictitious female names, Tünde, meaning ‘fairy’, would be ideal.

It is a female name associated with Eve. Evelina means ‘life-giving’.

Eunika means ‘a victory’ or ‘victory of goodness’.

If you are trying to determine the most common Hungarian names, the best title would be Janka. It means, ‘God is benevolent’.

Derived from the Latin name Oliva or ‘Olive’, it means ‘Olive Tree’. Olivia has been popularised by Shakespeare’s character in the play ‘Twelfth Night’.

Viktória, meaning ‘triumphant’, would be a prime example of a daughter’s name.

Selecting names for daughters, Eszter, signifying ‘star’, would be something unequalled.

Natasa has a Russian origin. Its Latin version Natalie means ‘birthday’ in reference to the birth of Christ. It means ‘born at Christmas’ in Greek.

Following the survival of the fittest, Brigitta, meaning ‘the noble one’, would be incomparable.

Making a choice, Noémi, meaning ‘great, charming, and vivacious’, would be the epitome.

Pick Bianka, meaning ‘beautiful’, when opting for the right name for your daughter.

Fruzsina, ‘meaning bliss’, would be a good choice when cherry-picking names for infant girls.

Choose Kamilla, meaning ‘the righteous’, when officially deciding the name for your daughter.

Thinking on your feet with reference to female names, accept Szonja, meaning ‘magnificence’.

Adam was the founder of the human race. Derived from the Hebrew Adamah, meaning ‘earth’, or ‘red’ referring to the ruddy colour of human skin, it is a Hebrew word for ‘man’.

If you’re trying to find a Hungarian counterpart to the English Vincent, elect Bence, which means ‘to vanquish.’

Dominik is the Slavic or German form of Dominic, which comes from the Latin word ‘Dominus’, meaning ‘belonging to the Lord’.

Have imperial ambitions for your boy? Then, call him by this title as it represents ‘the crown’.

Utter ‘Almighty is gracious’ by calling your son with a Hungarian variant of the name John.

Joszef is a Hungarian name meaning ‘Jehovah increases’ or ‘bestowing favours’. Its Hebrew variant is Joseph, who was the son of Jacob in the Bible.

This name is perfect if you prefer supremacy of honour in a male child’s name.

This name defines the God of war. It is a perfect choice if you are seeking a masculine name to represent vitality, determination, authority, etc.

Zontan is derived from the Turkish title meaning ‘king’ or ‘sultan’. He was the prince who reigned in Hungary during the 10th century.

Searching for biblical influences in manly names? Then regard Daniel, which means ‘God is my judge.’

This common Hungarian name is derived from the Turkish name Bator, meaning ‘brave’ or ‘valiant’. It may also indicate a person from Bator, a village in Hungary.

If in search of holy names for your son, opt for Tibor, which means ‘sacred spot’.

Name your son Milan if you want courteous, charitable, and cherishing interpretations.

Consider Botond as it is a Hungarian title for ‘mace’ using soldiers.

Derived from the old Hungarian name Csana, Csanad or Cenad was an 11th-century ruler who ruled in the Csanad County region of Hungary.

Derived from the Hebrew name Hebel or Hevel, meaning ‘breath’ or ‘son’, Abel was the son of Adam and Eve in the Bible.

Deliberate on this Hungarian adaptation of Nicholas as the title implies attitudes of winners.

Aron comes from Hungarian Aaron or Aharon of the Hebrew Bible. It means ‘mountain of strength’ or ‘the exalted one’.

Bertalan comes from the Middle English Bartelmeus, a cognate derived from the Latin Bartholomaeus or from the Greek Bartholomaios ‘son of Talmai’. Talmai means ‘hill’ in Aramaic.

Kristof comes from the Greek religious name Khristophoros or Christos, meaning ‘Christ-bearer’. It is also a Slavic variation of Christopher.

Perusing male names that denote water? Then choose a variant of the Latin Adrianus or Hadrianus, whose final connection is to the Venetian and Illyrian word ‘adur’ meaning ‘sea or water’.

Show deep respect to the ruler of planet Mars, the God of war, by naming your son Mark.

Desirous of a Hungarian male title that is identical to English Benedict? Then cherry-pick Benedek, which means ‘blessed’.

Derived from Aramaic Teoma, Tamas has a variant in Thomas and means ‘twin’.

Matyas is derived from Matityahu (Matthew) mentioned in the Hebrew Bible and means ‘gift of God’. It is named after King Matthias Corvinus of Hungary.

Derived from Greek Andreios, meaning ‘manly’ or ‘brave’, Andras is the Hungarian form of Andrew.

Hunting for a male name that means to be born in a noble family? Then decide on Patrik.

Attila is derived from Gothic Atta, which means ‘father’ through the diminutive suffix –ila, meaning the ‘little father’. It was the name of the 5th-century leader of the Huns.

Csaba is a Hungarian name meaning ‘shepherd’ or ‘gift’. He was the son of King Attila the Hun.

This name is a perfect Hungarian replacement for Karl or Charles in English. Its roots are in the Turkic Karul, which means ‘a hawk’.

Derived from the Latin name Hunnus, Hunor has a Turkish origin referring to the ancestor of the ethnic Hun tribe. Hunor was one of the twin sons of King Babibone, who built the Tower of Babel.

If being courageous is what you would like your son to be, then name him Vilmos, with a solid gold helmet as it signifies a ‘strongly motivated warrior’.

Derived from Latin Martinus or the name of the Roman mythological God of war, Mars, Marton means ‘warrior of Mars’.

Gyorgy is the Hungarian version of the name George. It comes from the Greek Georgos, meaning ‘farmer’ or ‘Earth worker’.

The Serbian or Slovak variant of Bela is Belo, and it comes from old Hungarian bel, meaning ‘heart insides’ or ‘intestines’ which are symbolisms for ‘guts’ or ‘bravery’. Its Turkish variant is boila or boyla, meaning ‘noble’.

Jeno is a variant of Greek Eugene, meaning ‘well-born’. It is a name of an old Hungarian tribe, and it means ‘advisor’ or ‘minister’ in Turkish.

Consider Gellert for your brave son as it suggests ‘gallantry with spear’.

Looking for Christian-centric names? Then choose Krisztián as it means ‘Christian’.

When exploring joyful male names, be glad you found Felix, as it connotes ‘cheerfulness and affluence’.

Sandor, in its Greek origin, means ‘protector of mankind’. It is a variant of Persian Alexander.

Probing for powerful masculine names? Then select Erik as it means ‘a continuously mighty ruler’.

A variant of the Turkic name Munzuk, Bendeguz means ‘jewel’ or ‘bead’. It was the name of Attila, the Hun’s father.

Imre, in Hungarian, means ‘strength’. Its Germanic variant is Emmerich or Heinrich, meaning ‘home ruler’. It was the name of the 11th-century Hungarian saint, the son of St Istvan.

When you adopt Hungarian names for your children, you receive a sneak peek into the Hungarian way of life.

Previous article « Delicious Campfire Desserts to Sweeten Your Campsite Experience
Next article Be a Responsible Parent, Teach Your Kids Good Habits, and Make Them the Best Amongst All »