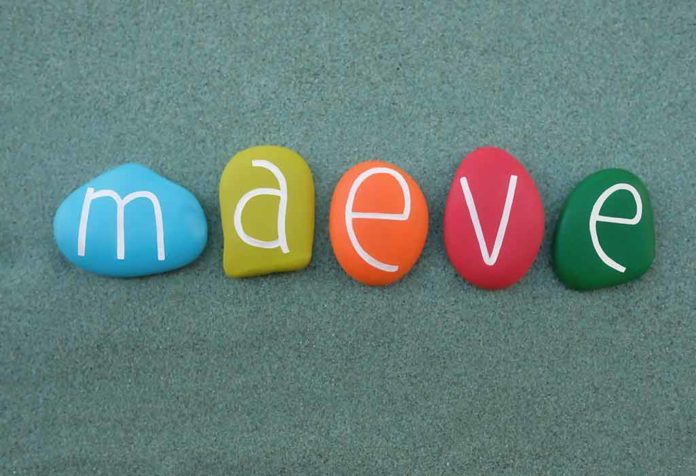 Of Irish and Gaelic origin, Maeve is a girl’s name that means “intoxicating” or “she who intoxicates.” A variant of Maev or Maiv, it is an anglicized version of the Irish name Meabh which has been spelled as Medb in Old Irish, Meḋḃ or Meaḋḃ in Middle Irish, and Meadhbh in early modern Irish. Maeve’s modern charm and resonance have made a better impact than similar names, like Mae, May, or Mavis. Popular since the Middle Ages in Ireland, Maeve came back to vogue in the 1930s and 1940s before spreading to other English-speaking countries.

What Does Maeve Mean?

Maeve is a short and sweet name of Irish origin and is counted among the most stylish Irish names for girls in the US today. Derived from the name of Queen Maeve, a mythological Irish goddess, the meaning of Maeve can be understood as “she who intoxicates,” “mead-woman,” or “she who rules.”

Meabh, Medb, and Meadhbh are variant spellings of Maeve connected to mead, a honey-based wine produced in many ancient cultures. In medieval Ireland, a king’s inauguration ceremony included the drinking of mead. Medb was a strong-willed and legendary warrior queen in Irish mythology. She is believed by many to be a manifestation of the sovereignty goddess. Maeve of Connacht lived in pre-Christian Ireland, dating back to the first century. She was originally a sovereignty goddess described as the Celtic equivalent of the “Iliad” in the ‘Tain.” Maeve can also be a variant of Mab that comes from Queen Mab, the leader of the fairies in English folklore.

Name variants are some of the available possibilities that are equally acceptable in alternative forms. Here are some of the Maeve name variations and other spellings for Maeve based on linguistic and cultural differences of nations:

How Popular Is the Name Maeve?

Records indicate that 6,428 girls in the United States have been named Maeve since 1880. Although Maeve sat at the lower ranks of the US popularity list in 1997, the name has climbed up the charts since the premiere of Westworld in October 2016. According to Social Security Administration data, the Maeve baby name ranking re-entered the chart at #849 in 1982. It has consistently been among the top 50 girl names since 2000, but the Maeve popularity index fell out since 2010, after staying at its peak at the 9th position. About 860 baby girls born in 2017 were named Maeve, which indicated an increase from 819 in 2016, 701 in 2015, 648 in 2014, and 568 in 2012. Maeve baby ranking has shown steady growth in popularity, breaking into the top 200 reaching its peak at 173 in 2020. Maeve is a pretty name that is not plagued with the spelling and pronunciation confusion generally associated with other Irish names. With the ‘may’ syllable being trendy right now invoking images of the springtime month, Maeve is sure to be headed for success.

Over the decade, search trends for the name Maeve have recorded a consistent search interest of over 10 reaching 100 in April 2020. The lowest value was recorded in April 2012 at just 10.

Interest in Maeve – US

Over the last ten years, search trends for the name Maeve have recorded a consistent search value of over 6 reaching 100 in April 2020. The lowest value was recorded in April 2012 at just 6.

Popularity of the name Maeve

Search trends show that the name has been searched the most in Ireland in the last ten years, followed by Australia, United Kingdom, New Zealand, and the United States. Belonging to an illustrious woman in Irish history woven with the beautiful aspect of Irish mythology, this strong yet elegant name for baby girls has become quite popular in Ireland.

Search trends of Maeve – US

The sub region of Vermont in the US is leading in terms of the most searched city over the last ten years. Massachusetts, Maine, New Hampshire, and Connecticut are among the top 5 cities of the US, where search trends for Maeve have been the highest.

Middle Names That Go With Maeve

Middle names give discretionary choices to take up the first name or middle name after reaching adulthood. Here are some of the on-trend double names with Maeve that can accentuate the name itself:

The name of a beloved personality never eludes a parent’s eye while looking for a unique name for their child. Some of the well-known bearers of this name Maeve are:

Baby names like Maeve may be identical in sound and different in style yet communicating the meaning well. Family names for Maeve can inspire a magnificent fantasy world and help to pay homage to some unique names. Here are some of the other names for Maeve that you can interchangeably use:

Names that rhyme with Maeve can sound like poetic monikers that might inspire parents with their sound. Here are some names that sound akin to Maeve:

Sibling names make the perfect combo that portrays the true nature of the relationship between them. Here are some of the best sibling names that go with Maeve:

Nicknames can be a great way to show your affection to your child. Here is a compilation of the most adorable nicknames for Maeve that are creative compliments to your child.

Maeve is a modern spin on a truly timeless name like Mary or Eve. Whether chosen for its rich Irish heritage or familiar feel, it can make a worthy contender for parents looking for a feminine name that doesn’t sound too overtly used or elaborately dainty.

10 Healthy Recipes That You Can Make With Your Kids!

Important Lessons in Life, As a Daughter and a Mom