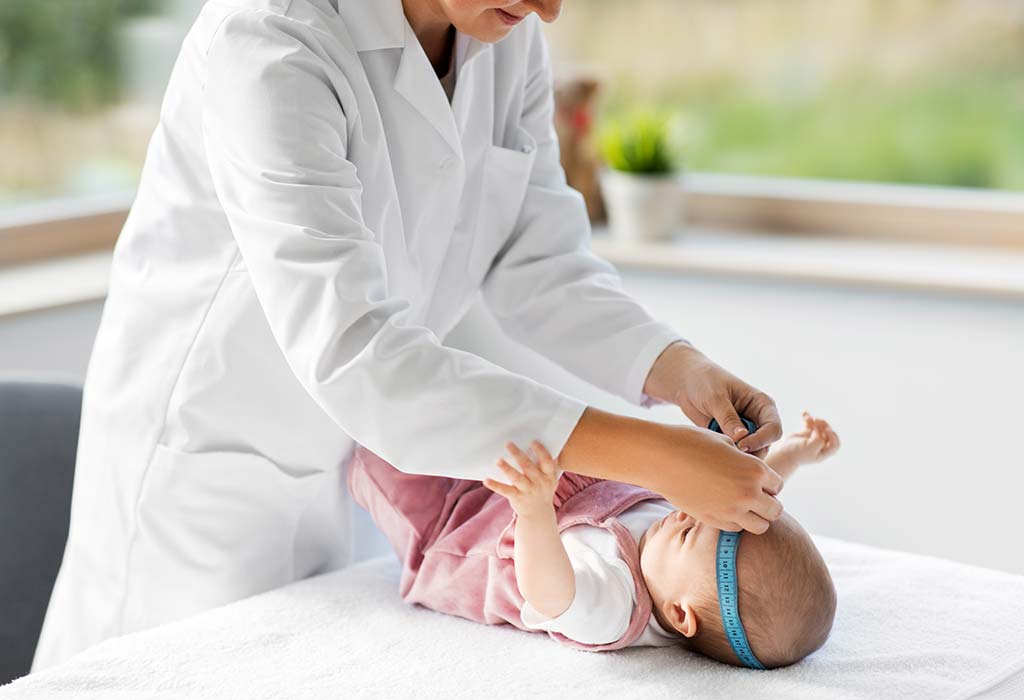 While all pregnant women dream about having the perfect childbirth experience, the thought of unusual and unwanted complications that may arise is never far from their minds. When a woman is pregnant, it’s only natural for her to worry about the possible things that could go wrong. One of the issues that could concern a mom-to-be is having her baby be born with an unusually large head.

A baby born with a big head (also known as macrocephaly) is a real concern, for it may lead to vaginal tearing or hard labour. (Yep! While it may seem strange, it’s a genuine concern.)

When the circumference of an infant’s head is larger than the normal measurement for his age and gender (or more than two standard deviations above average for his age), it is known as ‘macrocephaly’ in medical terms. Mostly, macrocephaly is benign, but in some cases, it may indicate complications or an underlying medical condition in the brain, such as a brain tumour.

What Causes Big Head in Babies?

Macrocephaly is usually a symptom of other conditions. There are various reasons for large head circumference in babies.

Hydrocephalus, the literal meaning of which is ‘water on the brain’, is a condition that occurs when there is fluid build-up in the skull, which causes the brain to swell. Extra fluid can put pressure on the brain and result in brain damage and other health complications. This condition can also cause physical, developmental, and intellectual impairments in the brain. Hence, medical intervention is necessary to prevent this condition from causing serious complications.

3. Problems in the Brain

Brain disorders such as brain tumours can cause a large head in babies. Megalencephaly (when an infant has an abnormally large, malfunctioning brain) and hydranencephaly may also cause macrocephaly. Hydranencephaly is a rare type of cephalic disorder in which the cerebral hemispheres of the brain are absent to a great extent, and in their place are sacs filled with cerebrospinal fluid.

4. Internal Bleeding in the Brain

Skull trauma can cause internal bleeding and swelling of the brain, which can lead to temporary macrocephaly.

5. Infections in the Brain

Infections of the brain can cause the brain and skull to swell, which can thus cause macrocephaly.

Some other causes of macrocephaly are:

In the case of benign familial macrocephaly, other than having a big head, no other symptoms are visible. But, if an infant has macrocephaly because of some underlying medical condition, the following symptoms may be observed:

How Is Macrocephaly Diagnosed?

A paediatrician can diagnose macrocephaly through a routine physical examination. If he thinks that the baby may have macrocephaly, he may further suggest imaging tests.

As part of the routine physical examination, the doctor will measure the baby’s head circumference at each visit. The doctor may also feel the soft spot (fontanelle) on the baby’s skull. If the doctor notices that there is an increase in head size overtime during the routine check-up and diagnoses macrocephaly, he may suggest imaging tests to look for abnormalities in the brain.

A Computerised Tomography (CT) scan uses a computer and rotating X-ray machines that help create cross-sectional or three-dimensional images. A CT scan will enable the doctor to check the soft tissues and outline of the skull and the point of deformity.

A Magnetic Resonance Imaging (MRI) test uses a magnetic field and radio waves to produce clear and detailed images of the brain and nervous system. The MRI test of the head is a painless, non-invasive test, and enables the doctor to diagnose the cause of macrocephaly and recommend a treatment for the same.

Can Macrocephaly Be Prevented?

Babies with benign familial macrocephaly usually grow up just fine and don’t face any complications. Their intelligence level or health may not be affected because of this condition. But, if a child has macrocephaly because of some other condition, the cause of the same will determine his growth. Many children with this condition tend to experience developmental delays, seizure disorders, and other such complications.

Macrocephaly in infants could be because of a benign cause or a result of a severe problem. If you’re pregnant and have concerns related to this condition, consult the same with your doctor. They can rule out this condition in the late second or early trimester of your pregnancy. If you have already welcomed your little one, take him for routine check-ups. Your baby’s doctor will be able to diagnose the condition (if it exists) and suggest the best possible treatment.