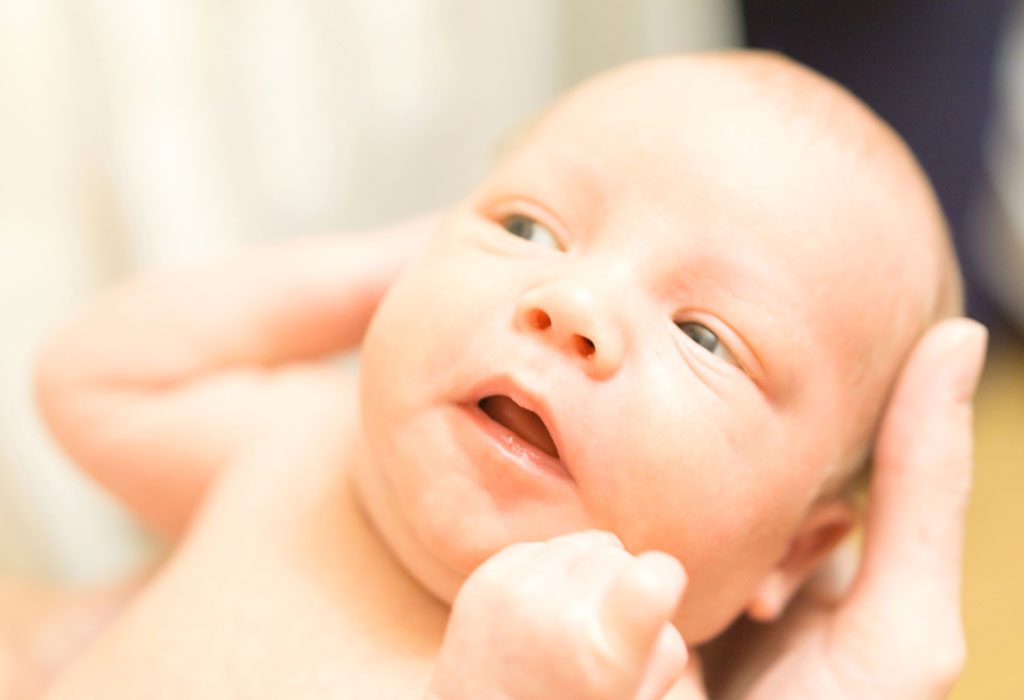 The skull is one of the most important bones of the human body, and one of the strongest too – a necessity, considering that it shields the brain, the most important organ in the human body. However, if you’ve noticed a newborn baby’s head, you’ll see that the head is relatively soft, so much so that they have soft spots (usually two of them) on their scalp. These soft spots found are called fontanelles. While this may seem bizarre, the fact is that your baby’s soft head is nature’s way of aiding a safe and easy delivery during childbirth. This article will provide you with all the relevant details you need to know about the soft spots on your baby’s head. Read on to know more.

What Are Fontanelles or Soft Spots on the Skull in Infants?

The head is the biggest part of a newborn baby. In spite of that, the baby can pass through the birth canal during delivery. What allows this smooth passage is a process called moulding during which the fontanelles or the soft spots on the baby’s head get moulded to reduce the size of the baby’s head. The soft spots eventually close once the bones of the skull join together and take shape as the baby grows.

Where Are the Soft Spots Found on the Head?

The soft spots or the fontanelles are found on the top and the back of the baby’s head. These are, therefore, also called anterior and posterior fontanelles. Why Do Babies Have Soft Spots on Their Heads?

A soft spot on the baby’s skull enables easy passage of the baby during labour. The presence of soft spots on the head could also indicate health issues or medical complication that the baby could have. What Precautions Do You Need to Take While Handling a Newborn?

There is so much more to handling a baby than just feeding and changing diapers. The one thing that every adult has to remember is to be gentle. This holds true, especially while handling the baby’s head.

A newborn’s head continues to develop up to about a year after his birth. The skull is not well developed and formed yet, and while the fontanelles of a newborn have tissues that cover the brain, it is still imperative that you handle the head with care.

Make sure your baby’s head is covered, especially during the winter and if it’s cold. A gentle head massage during bathtime will help form the bones too. Also, ensure you check the baby’s head for any signs or indications of abnormalities or complications. Usually, the appearance of the soft spots indicates the underlying issue, which is explained below.

Is It Normal If the Soft Spots Look Different Than Usual?

There is a possibility that the soft spot on your baby’s head will look different than usual. If the soft spot is slightly indented, it is an indication that the baby is dehydrated. If the indentation is too much, it could indicate malnutrition.

A large or wide fontanelle is usually seen in premature babies. However, if you think that the soft spot is too large, you must consult your doctor at the earliest as it can be a sign of complications like meningitis, encephalitis or other health issues.

Also, in rare cases, this may indicate swelling in the brain, which can be a cause of concern if it is accompanied by fever or lethargy. The reasons for swelling in the brain are not limited to head injuries only. So, ensure you get a complete diagnosis done if your baby’s fontanelles seem enlarged.

Other than the visual appearance, closure of fontanelles should also be checked as there are complications that could arise if the spot spots close before or after the estimated time. Read on to know more.

What If It Takes Longer for the Closure of Fontanelles?

The anterior soft spot closes at an average of eighteen weeks, while the posterior fontanelle closes at about six to eight weeks. A delay in the closure of the baby’s soft spot is an indication of disorders like dwarfism, metabolic issues, hydrocephalus and Down’s syndrome. You must talk to a paediatrician when the fontanelles do not close after a stipulated time.

What If a Soft Spot Closes Too Soon?

Premature closure of fontanelles can lead to complications as well. The pressure in the head increases if the soft spots close too soon and could lead to craniosynostosis, wherein the baby will have an abnormal skull development. This is evident from the unusual shape of the head. You must consult the paediatrician and seek immediate medical guidance if you see signs of craniosynostosis in your baby.

You are now probably wondering if there are treatments available for abnormalities diagnosed in fontanelles. Let’s find out if there are.

Treatment Options for Abnormalities in the Fontanelles

The medical practitioner could prescribe certain treatments for the following conditions:

1. For Sunken or Indented Fontanelles

A sunken soft spot in the head is an indication of dehydration. The baby will need to be fed enough liquids to treat this condition. In case the paediatrician has diagnosed malnutrition, the baby’s diet will need to be looked at to provide him/her complete nourishment.

If this birth defect is not as severe, the paediatrician would recommend a cranial mould to reshape the skull and allow the brain to develop normally. However, in the case of severe craniosynostosis, the doctor might recommend a correctional surgery, which could relieve some pressure on the head and improve the symmetry of the head. This treatment will also bring about improvement in the appearance of the head.

The soft spot on your baby’s head is nature’s way of helping the newborn make its way through the birth canal, but that’s not all there is to it. The fontanelles can help indicate underlying disorders or complications that the child is likely to suffer. So make sure you’re completely observant when it comes to your baby’s skull and the soft spots on his/her head.