In-Toeing and Out-Toeing in Children - Is It Normal?

In-Toeing and Out-Toeing in Children – Is It Normal?

In-Toeing and Out-Toeing in Children – Is It Normal? 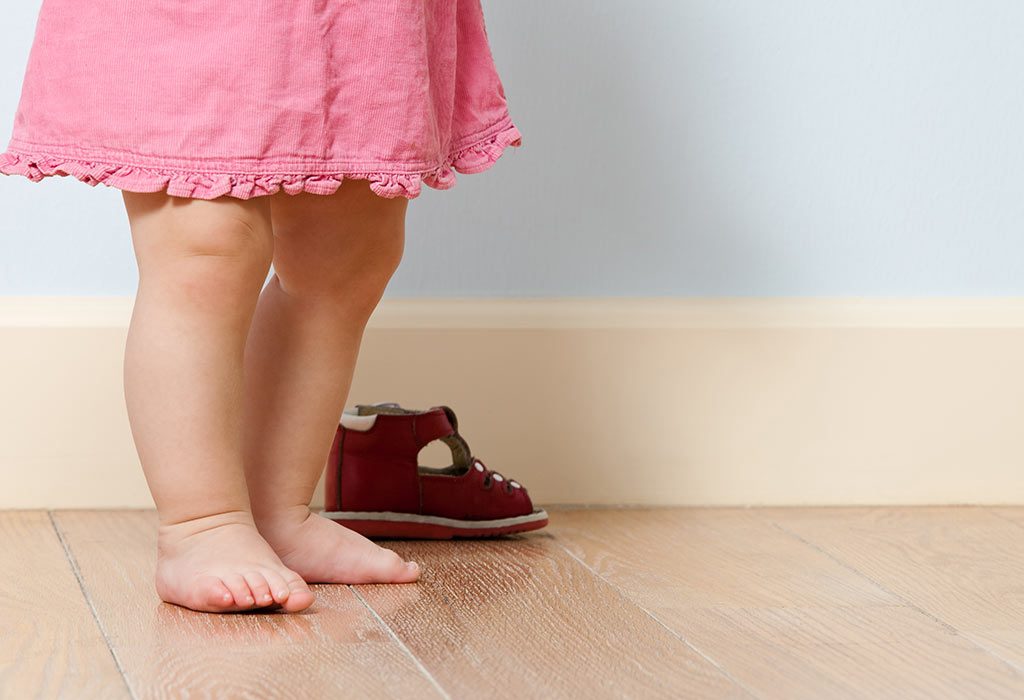 Seeing your toddler walk with one foot turned may worry you. It is normal for you to think if this condition is normal or is a result of physical deformity. In-toeing and out-toeing are not uncommon conditions, but they are definitely debilitating for children in their early lives. If your child has trouble walking, you must dig deeper to find out the cause and possible treatment options.

What is In-Toeing in Children?

Normally, while walking or running, we walk with our feet pointed and toes straight ahead. However, that may not be the case for everyone. In many children, you will notice that their feet may point towards each other. Such kids are known to be suffering from a condition called as in-toeing or pigeon-toe.

Causes of In-Toeing in Children

In-toeing is majorly caused due to genetic conditions and is usually passed on from one generation to the other.

1. Anteversion of the Femur

Sometimes the thigh bone of the child, called the femur, undergoes a twisting of sorts. This causes the kneecaps to point towards each other and give the child a pigeon-toed appearance when he walks. Squatting seems to make the condition worse. This condition is observed in more girls than boys.

2. Torsion of the Tibia

This is a condition that develops in a child even before birth. In order to fit within the mother’s uterus, the legs rotate. An untwisting takes place after birth, which allows a child to walk properly. However, if this does not take place, tibial torsion might set in which leads to feet pointing inwards. It exists while a child learns to walk and reduces after a while. 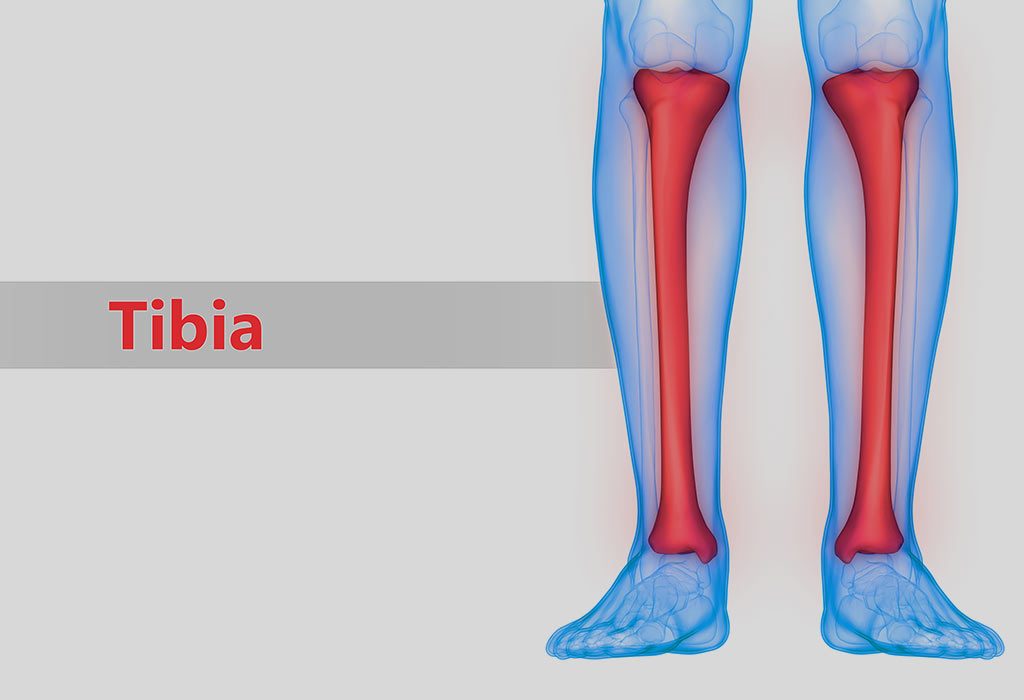 One of the most popular causes of in-toeing is a curved foot. It is highly genetic and is a result of uterine position. The foot appears bent inward from the middle of the toes. Mild conditions can be corrected over time, but severe bending with a stiff foot may require medical correction.

What is Out-Toeing in Children?

Out-toeing is the exact opposite of in-toeing. An out-toeing toddler can be observed immediately because his manner of walking is quite similar to that of a duck. While the chances of occurrence are minor in infants, it is also observed in older kids, too.

Causes of Out-toeing in Children

The causes for out-toeing in children range from some common ones to a few rare ones as well.

The existence of cerebral palsy in a child can cause various groups of muscles to not respond as effectively as possible. Many kids suffering from CP have been observed to experience an imbalance of sorts while walking around, too. Out-toeing emerges as a result of it, but it is majorly observed in a single leg and not both.

2. Retroversion of the Femur

In children, there exists a condition called femoral retroversion. Here, the bone of the thigh, termed as the femur, can twist in the outer direction substantially, and be misaligned with the joint of the hip. As the twisting causes the angle to be skewed in the backward direction, the feet also point outwards as a result. Obesity is a major factor in causing this condition.

Normal feet tend to have a natural curve to them or an arch of sorts. If those do not exist, the feet tend to be flat and even too flexible. This is not a rare condition and is commonly observed to result in an out-toeing of sorts. Thankfully, improvement takes place naturally and return to normalcy. 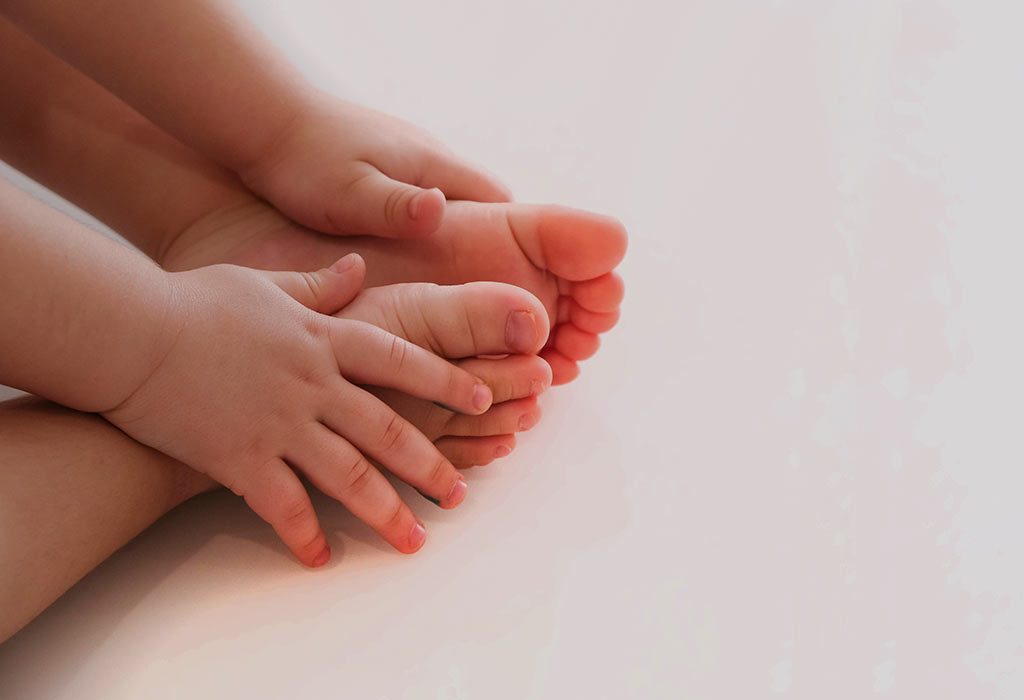 4. External Torsion of the Tibia

This is similar to the femoral retroversion; here a twisting of the bone in the outer direction takes place, the only difference being that it is the shin bone this time, called the tibia. Such a condition generally develops while the baby is within the mother’s womb and is in an improper position. Surgical intervention is required for correction since this condition does not resolve on its own.

5. Contracture of the Hip

A flexing of the baby’s hip occurs during pregnancy in order to be accommodated within the womb. If the uterus itself is positioned inappropriately, the flexing can cause the hips to be bent outward and remain so until birth. This causes some babies to be born with out-toed feet. Treatment is rarely required in this case since the body begins to correct itself once childbirth has completed.

How to Diagnose In-Toeing and Out-Toeing

Most doctors ask a child to walk and conclude from his gait whether he is suffering from in-toeing or out-toeing. In severe cases, an x-ray might be suggested to study the bone structure.

How to Treat In-Toeing and Out-Toeing in a Child

Figuring out how to correct pigeon-toed toddler poses numerous challenges since the condition itself depends heavily on the physical structure of the kid. Despite that, there are a bunch of techniques that can be undertaken in order to correct his gait as much as possible.

What Problems Do These Children Face in the Future

Such children have difficulty in learning to walk properly in the beginning, but get better later on. Most kids do end up playing sports and participating in other activities just like any other child. The condition usually gets better with time.

If the above techniques for correcting a child’s gait and walking problems do not work for your child, it may result in something more serious. You should get in touch with your doctor if your child shows any of the following signs.

When opting for pigeon-toed child treatment, it is essential to get your doctor’s go-ahead for it. It is best for things to improve by themselves and opt for supporting strategies if that were to be an option.