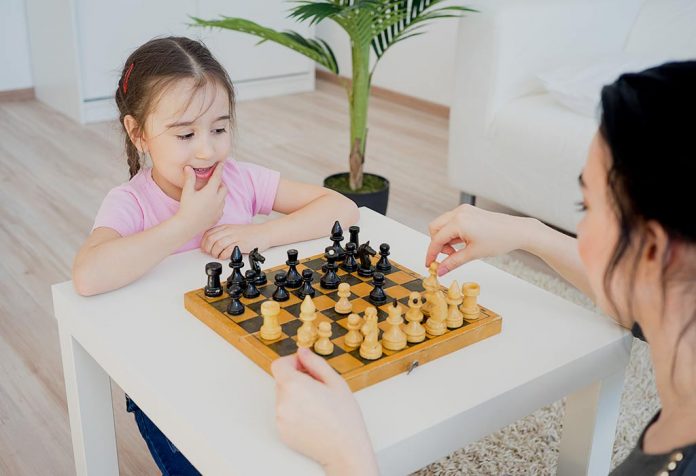 While parents might be apt at helping their kids with their homework or other life skills, some of them wonder how to teach chess to a child the right way. You might already be aware of the benefits the game brings, but teaching it to your child might not be a proposition you are fully comfortable with. Here are a few ways you can get started and let your kid take it ahead from there.

How to Teach Chess to Kids

Figuring out how to teach chess to your kid can be even difficult than it seems if you don’t already know the game yourself. Even if you do, the numerous techniques and plays can leave you a bit befuddled in figuring out where to start. As it goes with any skill, it is best to start with the basics and get your kid acquainted with the game, before starting off with a play.

1. Meet the Warriors and the Battleground

Before understanding the rules and the regulations of chess, your kid needs to know what the chessboard represents and the necessity for different pieces. Introduce him to each piece and their name. Don’t talk about their movement patterns, but do try to assign a power structure of sorts. Mention their arrangement on the board as well. 2. The Aim of Playing Chess

Once your kid is aware of the pieces of the game, it is time to let him know the end goal of each chess play. While setting up the pieces in their default starting positions, you can establish a background story of sorts, and establish the need for each side to defeat the opposite side’s king while protecting their own. 3. Begin With the Foot Soldiers

Beginning with all the pieces at the same time can be extremely confusing for your child. Instead, start with only pawns and play a small game using their basic rules. Let your child understand the basics of capturing a piece and defending others. He will get used to the diagonal movement as well. 4. Let the Horses Take Over

Pawns can help in understanding lateral and diagonal movements quite easily. Once your child has mastered those, you can bring in the knights and break down their movement patterns. Start off by simply keeping only knights on the board and ask your child to reach a particular square. 5. Bring in the Bishops

As your child becomes familiar with the movement of the knights, introduce bishops into the game. They are easy to understand since your child can interpret those as powerful pawns, in a way. Try setting up a tiny battle between knights and bishops. The final piece that completes the set of armies at the command is the rook. Having interacted with pawns, knights and bishops, your child would be able to use the rook easily as well. Now, it makes sense to try out a few interesting battle arrangements and exploit the strengths of each piece at length. While some might choose to bring in the Queen first, it is best your kid understands the essence of chess by a combination of the armed pieces and the King. Create scenarios which help explain the concepts of a “check” and a “checkmate” easily. Use the pieces to create multiple arrangements and ask your kid to find a way to check the other king, as well as protect his own. 8. The Master of the Game

It is essential to ensure the introduction of the Queen as late as possible when teaching chess. The sheer power of the Queen’s special abilities can make many kids opt for playing with her right from the start. Understanding other pieces better can help your child in figuring out how best to use a Queen to turn the battle around at a strategic moment. Make a list of all pieces and their possible moves as a reference sheet for your kid, and start off with a game. Give him time and correct him when he moves a wrong piece. Let him make mistakes and teach him why a capture was important or how he could have prevented one. Multiple games and practices will allow him to start seeing different strategies. Chess is not just a board game. With just a few pieces and a board of alternately coloured grids, the game evolves to be a teaching method of strategic thinking, teamwork, as well as a brain exercise of a different level altogether. The benefits of playing chess are beyond the usual, which is why it is recommended to start teaching your kids early in life.

1. A Stimulation of Creativity

Chess might seem to be an intensely logical game on the surface, given its rigid ruleset and fixed movement patterns for pieces. But this exact arrangement is what leaves the brain to come up with creative ideas and strategies within the logic, and give rise to some of the most supreme chess plays we’ve witnessed. This is all a result of the right brain kicking in during this game due to enhanced creativity.

2. An Improved Skill of Reading

Playing chess involved noting down the movements of the pieces and quickly figuring out what the notation might suggest. Even if notation might not be undertaken, the eyes get used to recognizing possible movement patterns of a particular game arrangement. This has reflected in improved reading skills of many children early in life.

The invasion of video games, digital devices and on-demand lifestyle has left many kids with reduced attention spans. This has resulted in a major problem when it comes to paying attention in classes or studies. Chess is a demanding game in that respect, and playing it regularly and help your brain build up a good attention span, which is beneficial for several aspects.

Children instinctively know how best to live in the present and cannot process a future planning that most adults learn late in life. A game of chess can be won only when you can think ahead of your opponent and plan your moves accordingly. Repeated plays can help the brain in instilling a similar skill in other aspects of the child’s life as well.

5. Understanding the Importance of Planning

One of the best parallels that chess has with real life is that there is no going back once you’ve made a move. Every decision comes with a consequence and a wrong move can be disastrous for the game. Playing chess regularly can teach children the importance of planning things properly and understanding how certain actions can turn out in the future.

6. Elevating the IQ Level of Your Child

It won’t be hard to notice that most children that play chess are quite clever in their studies or other aspects of their lives. The ability to play chess well has been directly linked with an improvement in the intelligence quotient of a child, and it trickles down to other behavioural aspects as well.

7. Using the Entire Brain for Thinking

Chess is not just about rules. Even the most logically strong children might face difficulty in playing chess. There is an element of spatial understanding as well, which is where the right hemisphere of the brain needs to provide its support. Combined with the novelty of each game, chess helps utilize the full capacity of your thinking power.

8. Improving the Ability to Remember Things

There is a reason why chess players note their moves as well as their opponents. It is important to remember the moves of the opponent, so as to recognize patterns and figure out what their strategy might be. The very act itself helps boost the memory and creates a stronger brain network that can remember things better.

There is no time in chess to repent of your own actions or give up halfway. The attitude of solving the problem at hand is a constant throughout the play. Engaging in multiple games of chess can inculcate a similar attitude in children as well, which can help them in school as well as other sports too.

10. A Supreme Power of Concentration

Chess can never be played if your mind is elsewhere, or while you’re watching television, or you’re busy with your phone. The game is long and can take anywhere from a few hours to an entire day to finish. Your child will develop a better stamina and the capacity to concentrate for long periods of time, allowing him to figure out complex problems better.

The benefits of playing chess for kids are truly endless. If your school does not have chess as a part of their sports curriculum, it is recommended to teach your children at home or send them to a class where they can develop the love for the game.

Also Read: How to Teach Your Child to Read Clock And Tell Time

20 Effective Home Remedies for a Migraine

Check Out Some of the Best Looks of Indias Most Beautiful Woman at Cannes Over the Years!