Interesting Information and Facts About Egyptian Pyramids for Kids

Interesting Information and Facts About Egyptian Pyramids for Kids 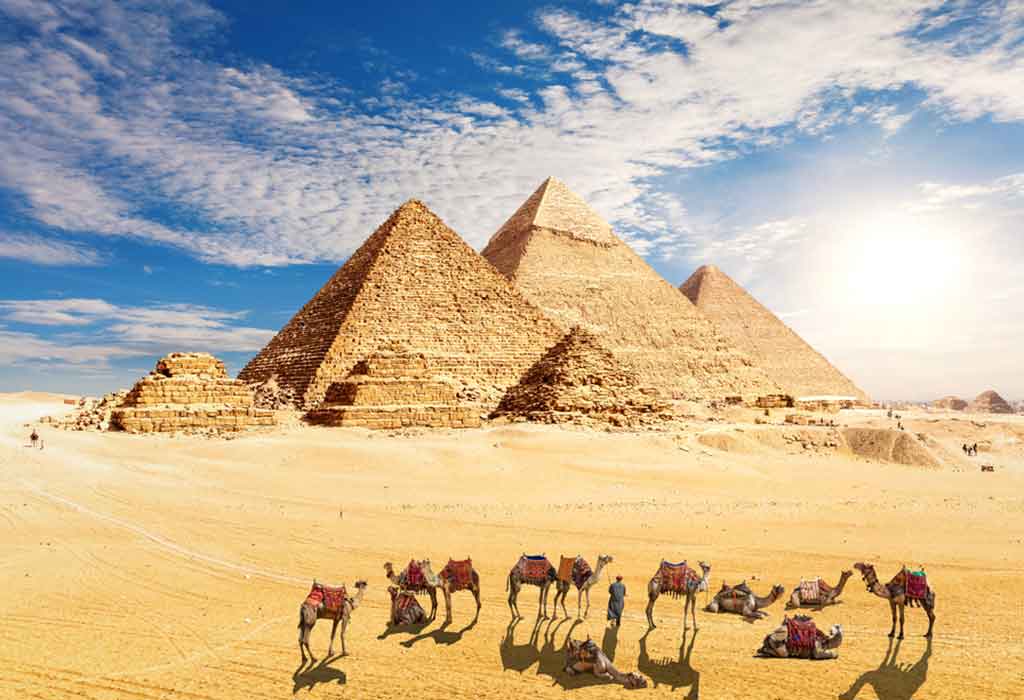 The findings of the renowned archeologist, Sir Flinders Petrie, suggest that Pyramids have originated from “mastaba” rectangular tombs. These were constructed 5000 years ago. It was Pharaoh Djoser’s tomb at Saqqara, which started as a rectangular tomb and developed as a step pyramid with underground chambers and tunnels. Thus, the base of the pyramid is rectangular and the sides triangular. The article will expand your knowledge about pyramids and fascinate you with the world of yesteryears.

What Are Egyptian Pyramids?

Egyptian Pyramids are ancient stonework structures located in Egypt. The pyramids are enormous structures that have become the identity of the country of Egypt. Travelers and conquerors have always been fascinated by the Egyptian pyramids since ancient times, till date. The pyramids are a structure with four triangular sides. It continues to wonder the archeologists, mathematicians, tourists who explore, visit, and describe the Pyramids.

Most of these Pyramids have been built as tombs for their Monarchs, generally known as Pharaohs and their consorts and family members, from ancient Egypt until its annexation by the Romans.

Who Built the Egyptian Pyramids?

The pharaohs got the pyramids built in different designated areas on the western banks of the river Nile. Different theories revolve around who built the Egyptian Pyramids. Historians and Egyptologists have for long been debating about the question of who built the pyramids. The traditional hypothesis, like that the pyramid builders were ancient aliens, slaves, and lizard people, is no longer valid.

The evidence gathered by the Egyptologists suggests that Ancient Egyptians built the pyramids. These ancient Egyptians were a big group of skilled laborers. It is believed that these workers had elite skills who were given food and accommodation. Mark Lehner, an archeologist who has excavated a city of workers in Giza, worked on a rotational basis with excellent team skills.

Zahi Hawass, Director General of Giza, has been excavating the workers’ cemetery, says evidence of the workmen who built pyramids have been found. Settlement camps of workers, bakeries, artisans, hieroglyphic inscriptions, and other evidence have been found on the overseer sites. The skeletons found and examined by doctors and scholars suggest they are all Egyptians.

When and Why Were the Pyramids Built?

The Egyptologists believe that the Pyramids were built between the 27th century BCE and the 7th century BCE. The oldest pyramid, The Pyramid of Djoser, also known as the Step Pyramid, was the first pyramid built in 27th Century BCE by the Egyptian Pharaoh Djoser from the 3rd Dynasty. It is located in Saqqara, the largest archeological site in the country. Saqqara was a vast necropolis of the ancient Egyptian capital Memphis. Imhotep was a chancellor to Pharaoh Djoser, and he is known as the probable architect for Djoser’s step pyramid. Since then, Pharaohs have been building a pyramid during their rule.

Building pyramids was at its peak from the fourth through the sixth dynasties. During the New Kingdom (1550 B.C. to 1070 B.C.), Pharaohs stopped building pyramids, and instead, they began to bury, in the Valley of Kings, located about 300 miles from Giza.

The Pyramids were built as monuments and burial places for the Pharaohs. The Pharaohs were expected to become Gods in their afterlife. According to the Egyptian belief, Pharaohs, their leader, would need everyday items, accessories, food, treasure, and jewelry to succeed and sustain themselves in the afterlife. The shape of a pyramid has a broader base and a pointed peak, as this was believed to help the soul of a pharaoh move to heaven easily.

How Were the Ancient Egyptian Pyramids Constructed?

Speculations galore exist about how the pyramids were constructed. Egyptologists and archeologists have been trying to solve this mystery for several years now. The Pharaohs would generally start the construction of the pyramid as soon as they became the ruler.

The Giza pyramids were built from huge blocks of stones, weighing up to 70 tons. The stones were quarried on the Giza plateau; limestone casing was brought from Tura and granites from Aswan. The workers used copper tools like drills, chisels, and saws to cut the stones. Tomb paintings have shown how huge blocks of stones were moved over the ground on sleds and then brought up on the pyramid ramps. The pyramids would be built slowly, with one block at a time. The outer layer of the casing stone would be complete in a top-down approach, and the ramps would be dismantled as the work would get completed.

The pyramids are mysterious and examples of excellent technical knowledge of ancient Egyptians, and there is practically no record available to suggest how these massive structures were built.

What Is Inside the Pyramids of Egypt?

The pyramids have underground chambers, the King’s chamber, which is the Pharaoh’s burial chamber. These chambers would be filled with treasure, everyday items to be used by the Pharaoh in their afterlife. There are rooms near the Pharaoh’s chamber, where the family members and the servants of the Pharaoh are buried. The Pyramid complex also has other rooms that were possibly used as temples to offer prayers and larger rooms used for storage. There are multiple airshafts and ascending and descending narrow passageways leading to the outside. As the pyramids had valuable treasures buried, fake burial chambers and passages were also built to try and trick severe robbers. However, almost all of the pyramids were robbed of their treasure by 1000 B.C. Some pyramids also have carvings, paintings, and hieroglyphics by the original builders exhibiting the life of the kings and the ancient Egyptians.

How Long Did It Take for the Egyptian Pyramids to Be Built?

Which Egyptian Pyramid Is the Largest? 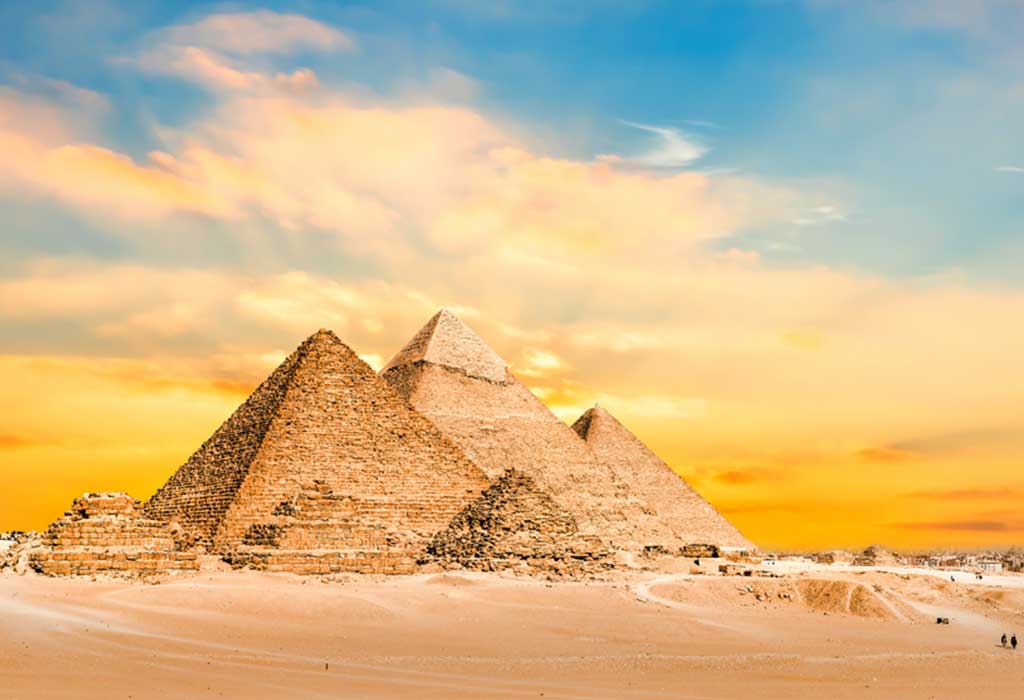 The Pyramid of Khufu, also known as the Great Pyramid, is Egypt’s largest, tallest, and biggest pyramid. It is located to the north of the city of Cairo. It is believed to have been constructed in c.2551 – 2528 BCE by Snefru’s son Khufu. It is 147 meters tall (481.4 feet) or about as long as 45 stories. The immense structure and its size make it an architectural marvel to behold. It is the only one to have remained largely intact. The Great Pyramid stands alongside the Pyramids of Khafre for Khufu’s son and Menkaure for the successor of Khafre, which are generally big solid masses of stones. It is estimated that 2.3 million blocks of cut limestones were used to build the Great Pyramid. The pyramid’s base covered more than 13 acres and rose at an angle of 51 degrees. The volume of the great pyramid of Giza is about 81 million cubic feet. The white smooth limestone casing was removed through the ages, and it lowered the pyramid’s height to the current 138.5 meters tall (454.54 feet). Hence, what is seen today is the underlying core structure of the pyramid.

How Big and Tall Are the Egyptian Pyramids?

The Egyptian Pyramids are immense structures that could go over 100 meters. However, all Egyptian pyramids have different dimensions. Each side of the pyramid is above 5 acres, totaling more than 13 acres of space. The largest Egyptian pyramid, the Pyramid of Khufu, is 147 meters tall, half the height of the Eiffel Tower. It is taller than Big Ben in London and The Statue of Liberty in the United States of America.

The Great Pyramid is estimated to be very heavy, weighing about 5,750,000 tonnes. It weighs about 16 times the Empire State building in The United States. The smallest pyramid of Egypt is 65 meters tall, which is still taller than the leaning tower of Pisa, with a volume of 235,183 cubic meters.

How Many Pyramids Are There in Egypt?

It is estimated that there are between 118 to 138 Egyptian pyramids so far known to Egyptologists. With time, more discoveries are being made about pyramids across Egypt.

Other Important Facts and Information About the Egyptian Pyramids

The Egyptian pyramids are structures of genuine wonder, fascinating kids and adults alike. So, regardless of whether you are a child or an adult, these additional facts are sure to intrigue you:

The first thing that pops up in mind when you think of a pyramid is the Pyramids of Egypt. The Egyptians built the pyramids for religious purposes. Egyptians were one of the first civilizations to have believed in the afterlife. The information provided here gives kids insights and facts about ancient Egyptian pyramids, the wonder monument of the world.