An apple a day keeps a doctor away. The fruit has been a part of your child’s diet since he/she was a little baby. Remember all the apple puree you fed your little munchkin while weaning? Now that your baby is old enough to chomp on and relish slices of the fruit to his/her heart’s content, let’s use the fruit as a subject and teach your child how to draw an apple, step by step. Read on for easy instructions to draw an apple.

Video : How to Draw An Apple – A Step-by-Step Guide for Preschoolers and Kids

What You Will Need to Draw an Apple

Here’s an easy guide on how to draw an apple, step-by-step.

Using a pencil, draw a circle with the help of the circular lid. We’ve given a size-specification, but you can choose to draw your apple as big or small as you want. You can also go free-hand with the circle. 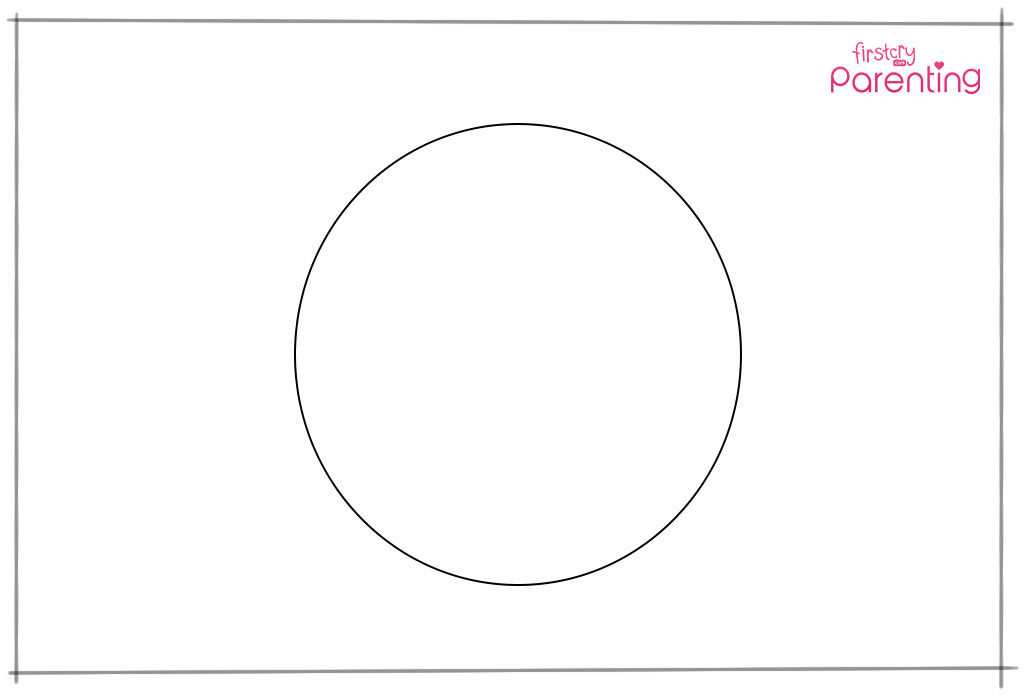 Step 2: Draw a Wave in the Top Half Part of the Circle

Leave some distance from the top of the circle, draw a wave-like pattern that dips in the centre as shown in the figure below. This dip/ trough is where we will draw a stalk later. Let the ends of the wave overlap the circle on each side. It should look like a hairline on a face. 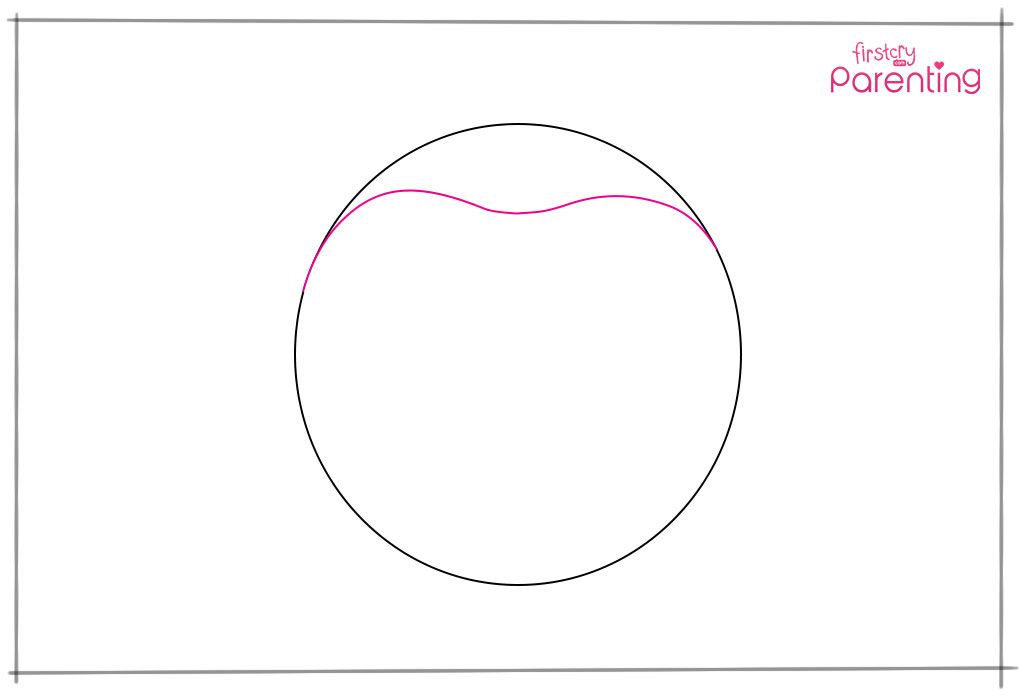 Step 3: Draw a Wave in the Bottom of the Circle

Draw another wave-like pattern at the bottom of the circle with its centre raised, as shown in the figure. Once again, let the ends of the wave overlap with the sides of the circle. The bottom curve is where the stamen of the apple is located. The drawing now probably looks like someone wearing an over-sized pair of glasses, but it actually is the body of the fruit. Easy to draw, right? 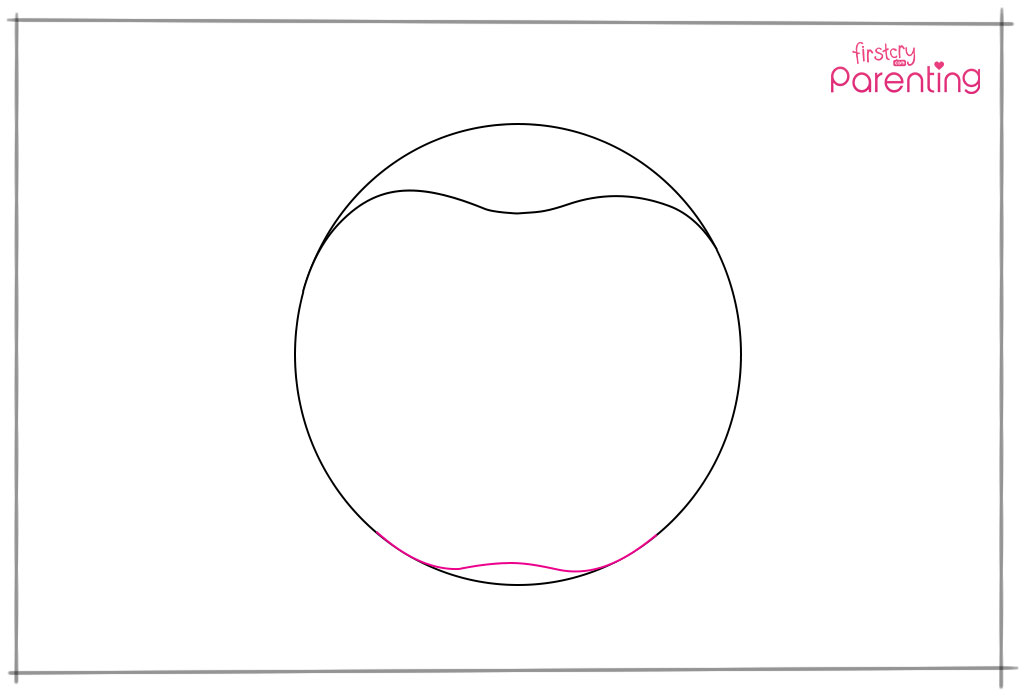 Step 4: Draw a Small Curve Under the Top Wave-Like Pattern

Just under the top wave pattern, draw a curve underneath the gentle trough, as shown in the figure. 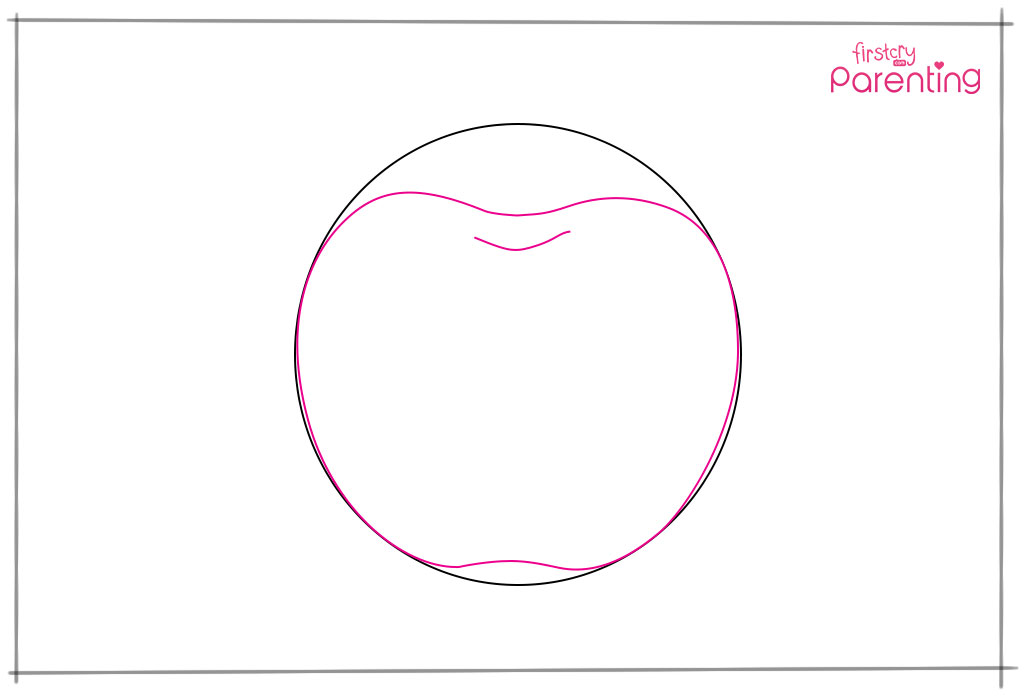 Step 5: Draw a Stalk and a Leaf

Draw two slightly-curved lines projecting upward from the centre of the small curve you’ve just drawn. Join the ends of these lines. There, you have the stalk! It should look like a gently sloping elongated triangle.

If you’re keen on learning how to draw different types of leaves, do leave a comment below. 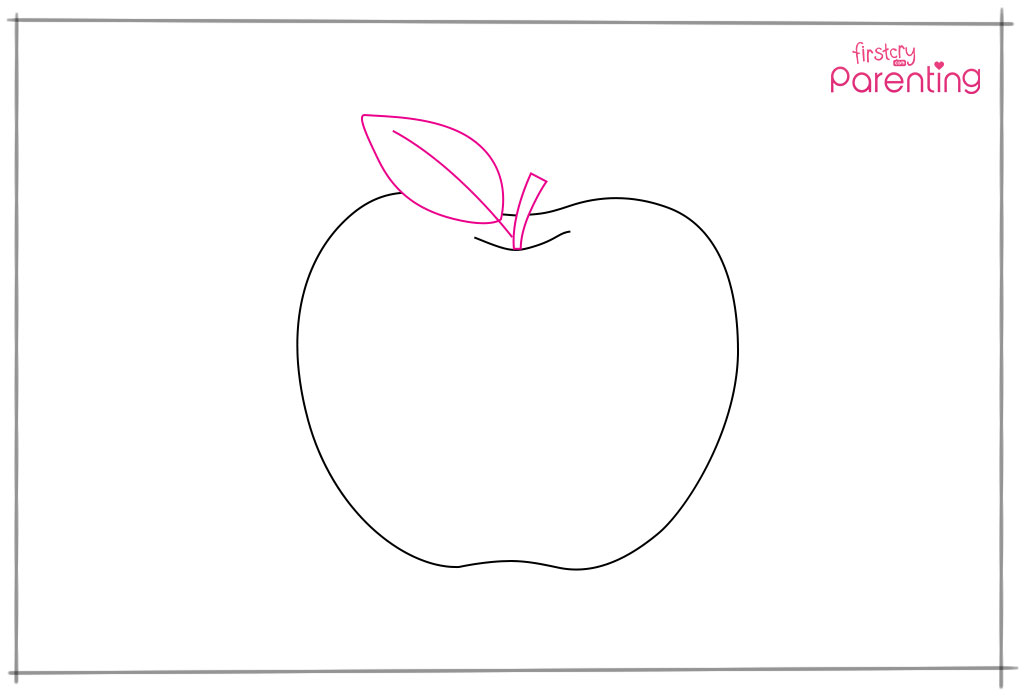 Step 6: Draw the Veins of the Leaf

Now, on the leaf, draw slightly curved lines projecting out from the centre line. These are the veins of the leaf. 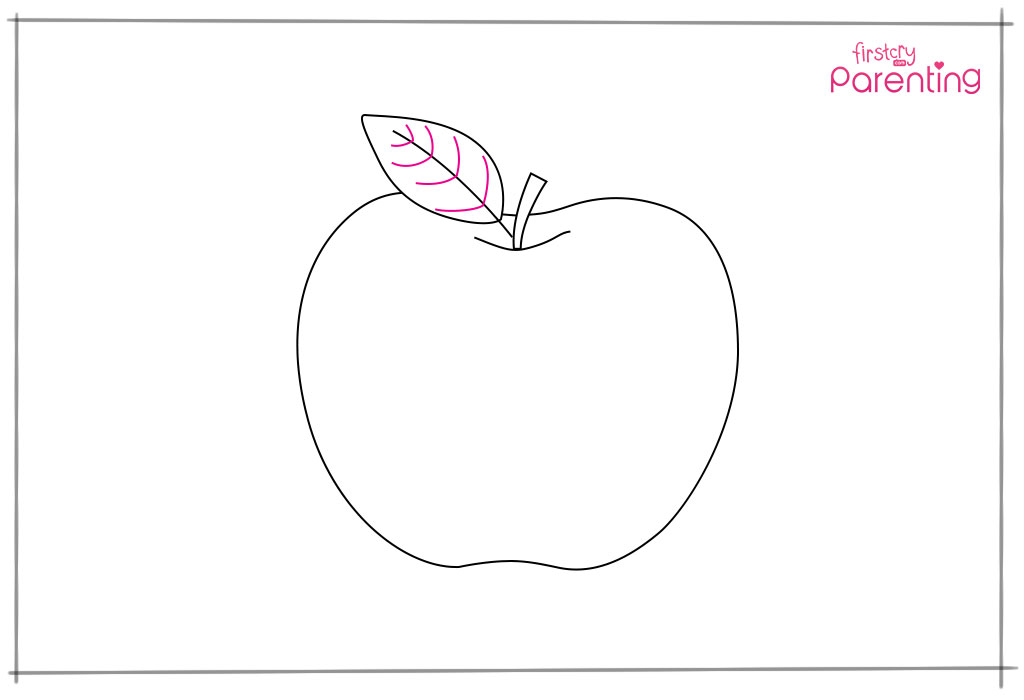 Now, erase off the unwanted lines and, with a black sketch pen, outline the apple. 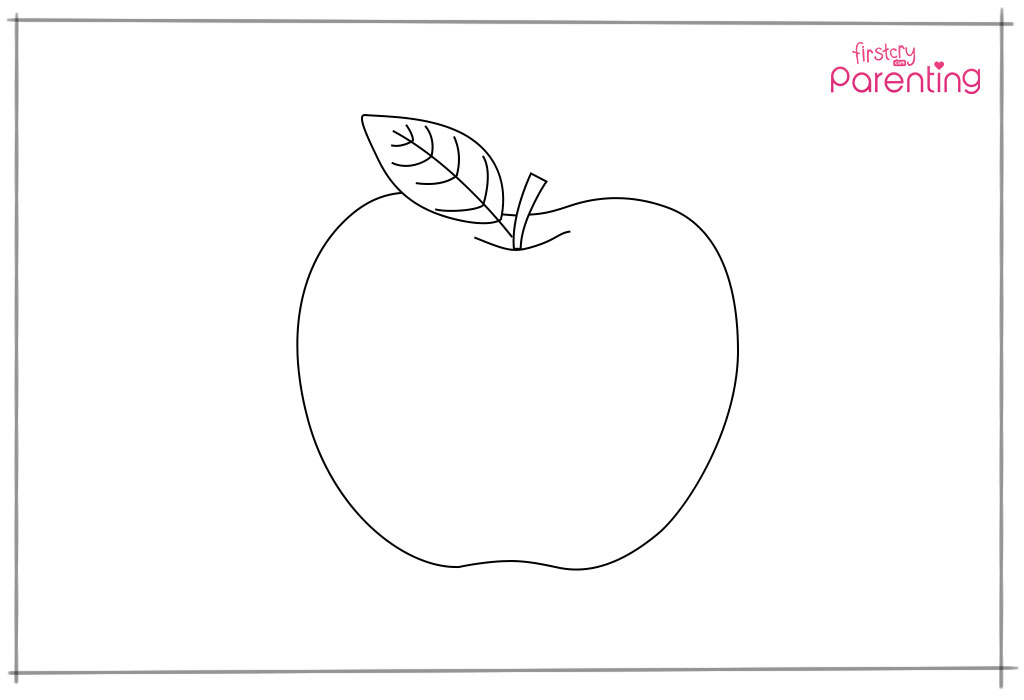 Colour the apple in a vibrant red colour. Use green for the leaf and brown for the stalk. 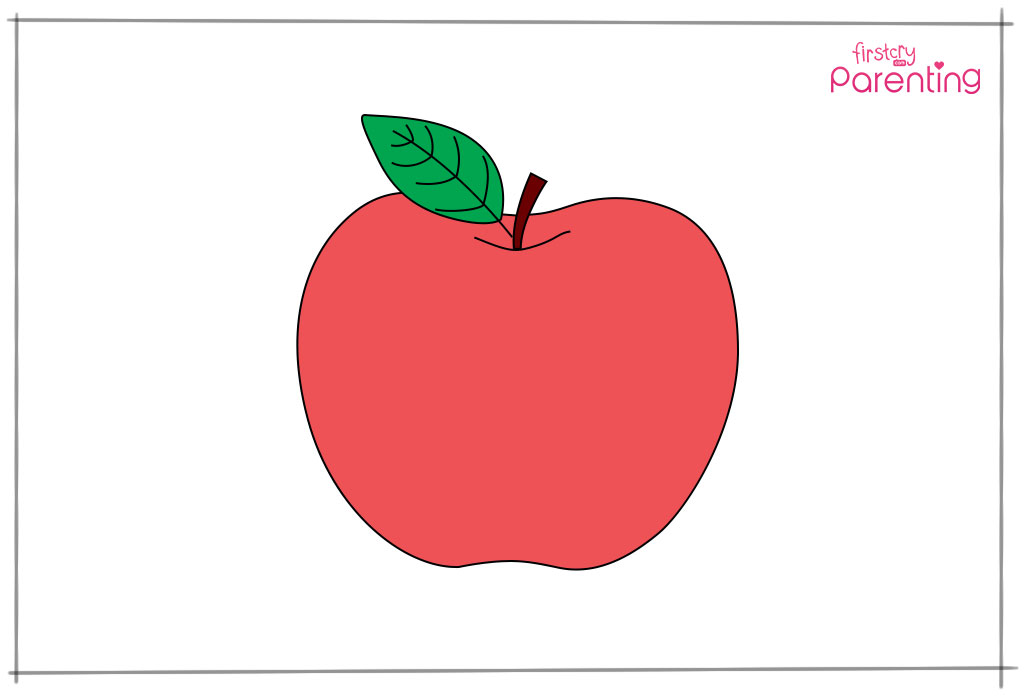 There you have it! With this step-by-step, easy-to-draw apple guide, you can teach your tiny tot how to draw an apple! Let your munchkin draw as many apples as they want and show them off to your friends and family. Don’t forget to reward your kiddo with one of some delicious apple recipes. The apple of your eye deserves it!