Flaxseeds for Babies and Kids – Benefits and Side Effects

Flaxseeds for Babies and Kids – Benefits and Side Effects 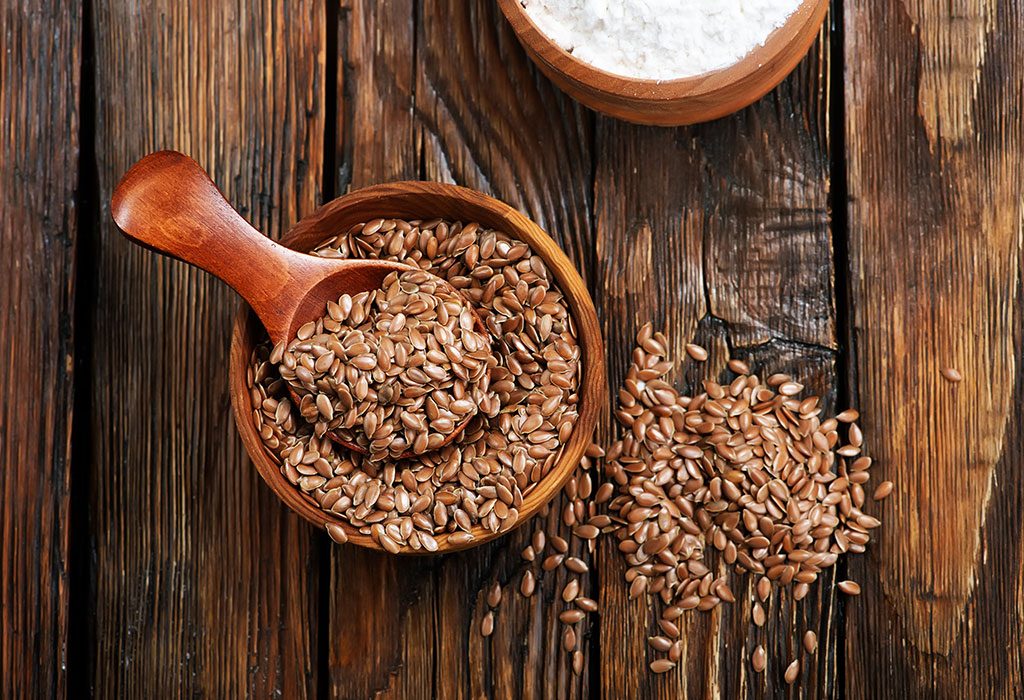 When our children are small, they need lots of nutrition to grow and develop properly. This nutrition comes in the form of a large variety of fruits, vegetables, grains, nuts, seeds, and even supplements (but, choose natural and organic foods whenever you can!).

There are certain foods that are powerhouses of health and nutrition. These are called ‘superfoods’, and they contain good amounts of essential vitamins, minerals, and nutrients like Vitamin B complex, Vitamin C, folate, omega-3 fatty acids, choline, calcium, iron, etc.

Let’s talk about one such superfood – flaxseeds!

The inclusion of flaxseeds in a child’s diet is beneficial for him, but it is a decision that should be taken after consideration of its nutrient content, pros, and cons. There are a number of food items that your kid needs to be consuming on a regular basis, but eating habits may not be necessarily correct at this stage, leading them to fall short of some particular nutritious elements that might be vital to them. Flaxseeds may actually help them keep all of it balanced in an appropriate manner.

Flaxseeds are obtained from the flax plant, which flowers perennially across the year. Usually present in the Western regions of the world, the seeds can be found in most supermarkets. The flax plants have been cultivated, and the seeds have been used since ages in many civilizations, too.

As mentioned, flaxseeds are a superfood. The nutritional benefit they provide is ground-breaking! In 100 grams of flaxseeds, the following nutrition can be obtained:

When to Introduce Flaxseeds to Babies

Flaxseeds rarely trigger any allergies in babies, making them a safe food to be given to infants. The ideal age is usually the time when babies are being introduced to solids, making them a great fit for when your little one is about 9 months old or so. Benefits of Flaxseed for Infants and Kids

Aside from the nutrition that they provide, there are tons of properties that can benefit your child, both directly and indirectly, in numerous ways.

One of the constituents of flaxseeds is lignans. These are known to protect the body from numerous cancer risks that could cause problems either presently or later in life.

Many studies have reported that flaxseeds can substantially reduce the risks of various problems associated with the respiratory system, such as inflammation. By hampering that,  flaxseeds reduce the chances of asthma, migraine and other disorders.

The body of babies and kids have plenty of development to go through, especially in terms of brain growth and the improvement of eyesight. Omega-3 fatty acids play a vital role in this regard, as they stimulate the development of the brain. Flaxseeds contain alpha-linolenic acid, which allows the body to build the omega-3 acids, and thus supports overall growth.

The amount of fiber in flaxseeds is what makes it a favourite amongst health fanatics! Flaxseeds works on bowel movements, and regularize the normal functioning of the digestion system in a jiffy.

Proteins play a huge role in a child’s development, providing them with the energy they require for metabolic activities, and aids the development of muscles as well as the internal growth of organs. Flaxseeds provide all of this within a nice, small package!

Possible Side Effects of Flaxseeds in Children

The multiple advantages of flaxseeds might get you eager to start using them in your child’s food preparations right away. However, this superfood does not come without some potential side effects.

How to Store Flaxseeds

Flaxseeds can decay quite easily if they aren’t stored in the right manner. Storing them in the refrigerator is the best method. If the seeds are whole, these can last for up to 2 years when stored properly.

Can You Use Flaxseed Oil as a Substitute for Other Cooking Oils?

Flaxseed oil is another product of the flax plant. However, it would be a bad idea to use it to prepare food! Flax oil is not meant to be used in cooking, and any exposure to heat will immediately cause it to burn and be spoilt.

However, that being said, flaxseed oil is actually quite safe and beneficial when used in other methods, such as dressings for salads, additions to dips and sauces, and even as a tablespoon or two in smoothies and shakes! They can also be taken as supplements, and are especially important if you aren’t taking fish oil supplements (for omega-3 fatty acids). How to Include Flaxseed in a Child’s Diet

Flaxseeds can go with numerous other food items. Making them a part of your child’s diet can be possible in different ways, depending on his age.

To be able to bring the most benefit, flaxseeds need to break down completely within the body and be absorbed by the digestive system. Thus, don’t bake them into muffins, bakes, or breads, as that can prevent absorption of all the constituents in an appropriate manner.

A Child’s Diet (older than 1 year)

As cooperative as your baby might have been in the early years, he might not like flaxseeds as he starts growing up, due to the fussy toddler stage. Don’t worry, though – you can still find great ways to include them without him finding out!

Flaxseeds are supremely nutritious, and are consumed by people all over the globe. Right from using flaxseed oil for constipation to including them as a supplement for enhanced health, your children can benefit from flaxseeds, when administered in the appropriate amounts. Be assured that they will warm up to their presence in the diet after a few instances!

Ajwain and Ajwain Water for Babies