Eating Sushi During Pregnancy – Is It Safe?

Eating Sushi During Pregnancy – Is It Safe? 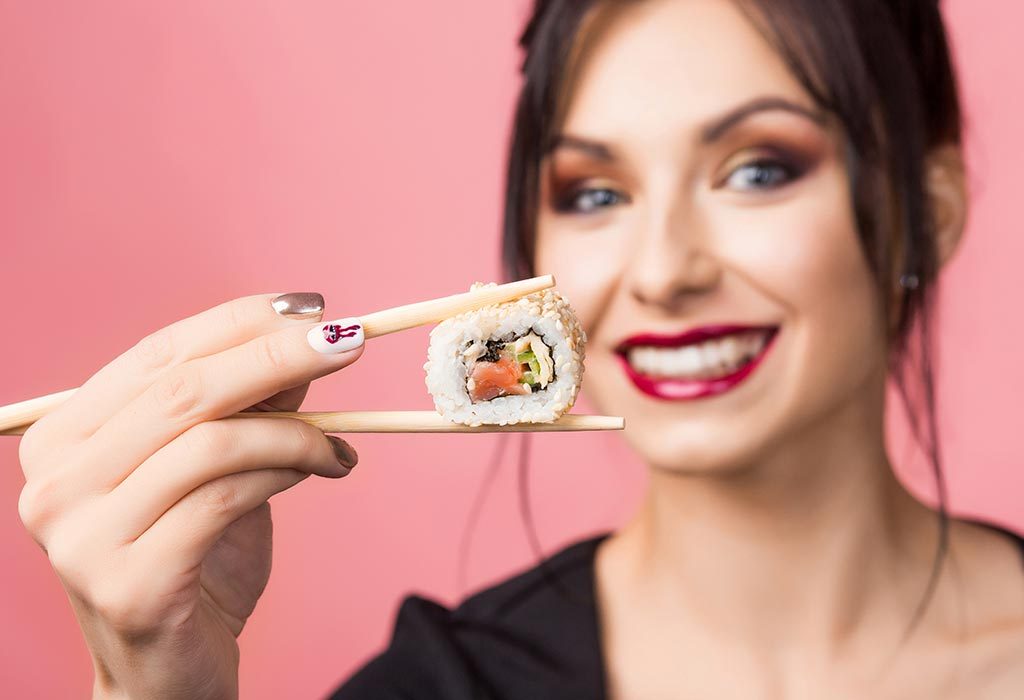 Pregnancy has been characterised by the inability of moms to take part in activities they love. After a woman finds out that a baby is on the way, she will no doubt be full of questions about her actions and diet – questions start to pop up in her mind regarding everything around her. Questions about suitable food items are common, and the mother will definitely find herself having to forfeit on a lot of items she loves.

Sushi is a Japanese dish that has become famous and loved all over the world. However, sushi can raise a lot of questions during pregnancy, regarding whether it is safe to consume or harmful to the health of the foetus. In this article, we will take a look at whether sushi is safe to eat during pregnancy.

Can You Eat Sushi During Pregnancy?

Consuming sushi during pregnancy is not harmful to the child, provided it does not have uncooked or unfrozen fish. It has been found that raw fish has higher levels of harmful chemicals like mercury, and may also contain harmful bacteria and other pathogens. If the fish has been frozen or cooked thoroughly, sushi is fine to be consumed. Freezing the fish kills off a lot of parasites present in it, and high temperatures also have a similar result. The fish must be cooked at temperatures close to the boiling temperature to make it safe for consumption.

The sushi itself is not harmful for consumption. For pregnant women, the methods that are followed to make the sushi are what makes it harmful. In extreme cases, consuming sushi can also induce miscarriage in the woman. Let us take a look at a few of the risks involved in consuming sushi.

If the fish used in the dish is raw, there is a high chance of the woman contracting parasitic infections from it. Raw fish contains high levels of bacteria and other parasites, like tapeworm, which can deprive the foetus of a lot of necessary nutrients when it grows. Such infections also affect your digestive system and gastrointestinal tract, which means that the growth of the foetus will be hampered. Anaemia and malnourishment are some other side effects of contracting a parasitic infection, and it can result in a miscarriage of the baby. During pregnancy, the immune system of the woman will be suppressed and greatly ineffectual. Consuming sushi at such a time can result in the mother contracting diseases that spread through the food, like listeriosis. Raw fish can also contain harmful listeria bacteria, so this remains a huge possibility.

If the fish has not been cooked properly, it may still contain high levels of harmful chemicals like mercury. This is especially dangerous during pregnancy, as it can result in the nervous system, lungs, kidneys, vision and even the hearing abilities being damaged in the baby.

How Can Sushi Be Made Safe to Eat While Pregnant?

Even though there are many harmful effects of consuming sushi during pregnancy, it can still be made safe for consumption by using the right kind of fish. The fish used in the dish must be ‘flash frozen’, which refers to a process of keeping the fish at extremely low temperatures right after harvesting it. This process has the capability to kill off a majority of the parasites and bacteria present in the fish, making it safe to consume.

Mercury levels are a real danger for pregnant women, so they should make sure to consume only fish with the lowest levels of mercury. These include fish such as: What Kind of Sushi Should Pregnant Women Avoid?

Pregnant women should avoid sushi using fish with high levels of mercury, which include the list given below apart from shark, swordfish, and Mexican tilefish:

What Sushi Rolls Can You Try During Pregnancy?

Pregnant women can consume some types of sushi rolls without any fear, and these are:

Pregnancy is all about feeling good and feeding your desires, but the risks of consuming raw sushi outweigh the feeling of happiness you get when you consume it. However, you can consume the varieties of sushi given below, as they are safe to eat even during pregnancy.

While flash freezing can take care of the parasites present in the fish, there is an alternate process to kill those bacteria too, and that’s curing. If the fish has been cured, salted, and pickled, you can be sure that all the parasites in it have been killed off. In order to cure the fish, you will need vinegar and salt. The first step is to apply the salt over the fish and leave it untouched for around one and a half hours. Then, wash the salt away and dry the fish using a towel, before soaking it in vinegar for about ten minutes. Dry the fish again, and then use it to make the sushi. This is the safest type of cooked sushi while pregnant, as it does not contain fish at all. Instead, you replace the fish in the dish with vegetables like carrots, avocado, or even cucumbers. For people who love fish, this can seem unappealing- however, it can turn out to be a great, tasty dish if it is made with the right ingredients.

Instead of curing the fish at home, you can also treat it in other ways to make it safe for consumption. Ensure that the fish has been left in the freezer for at least four days so as to eliminate the bacteria before cooking it.

Sushi Recipes You Can Make at Home

Here are a few recipes that you can try at home when you get a craving for some sushi.

A great alternative to using fish, it is also perfectly safe for consumption even during pregnancy. This is a good choice for mothers who love their occasional serving of fish and sushi. While sushi is a tasty delicacy, consuming it during pregnancy comes with a lot of risks. However, you can still have the dish if you ensure that the fish has been cooked properly. Otherwise, the best thing to do would be to consume vegetable sushi, which has no harmful effects whatsoever.