Home Magazine Contributions Discovering Being Pregnant With Those “Two Pink Lines” That Changed My Life... 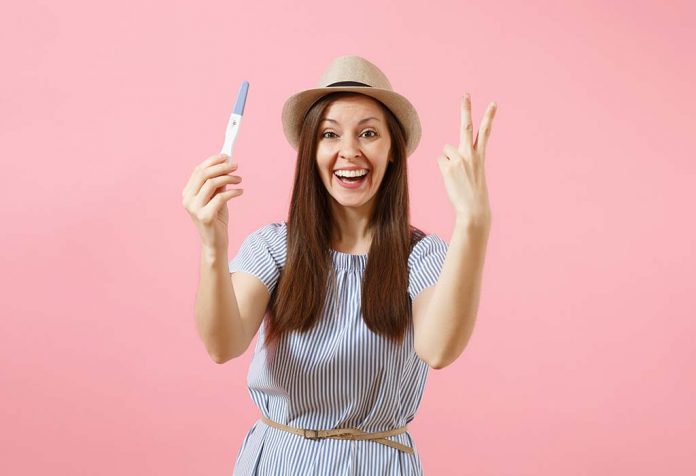 It was 24th March of the year 2016. It was Holi – the Indian festival of colours and this time I was to celebrate the festival with Mr. Husband after 2 years. But I wasn’t sure if I was keen for the celebrations because, since past few days I had not quite been feeling normal with fuller achy breasts, bloated tummy and the urge to urinate frequently. These are the typical pregnancy symptoms, right? But these symptoms had long ceased to interest me over the years of countless failed attempts to get pregnant.

Very early in the morning, when Mr. Husband was still sound asleep, I sat up and mechanically taking a home pregnancy test from the drawer I sneaked my way into the toilet. I very distinctly remember that historic day. It was very early in the morning, the sun hadn’t risen yet. There was just the pink sky before the sunrise and the morning birds had only begun to chirp. For the years that I had been trying, I had watched the urine reach the other end without batting an eyelid, waiting eagerly for the result – each time more hopeful and excited than the previous. But this time, as I sat on the toilet pan, unmindful of the process, the last 4 years of struggle, hope and faith started to unfold and flash before my eyes.

For the past 4 years, it had become a routine that whenever we were together and I missed my periods, even for 2 days, I would religiously take a home pregnancy test in the hope that this time it comes positive. I would keep looking at the test with my eyes wide open until the test completed only to see the white evaporation line each time, and that solid pink control line mocking me. But unfortunately in our 4 years of marriage, and amidst I don’t know how many pregnancy tests (I had lost count of), I hadn’t had one single test positive. It wasn’t that we were trying throughout, but we weren’t “not trying” either. Initially, my mother would just give hidden cues, but now even she had started to talk about it openly and directly. It had been so long now that not only people, but even I had begun to question my fertility and almost convinced that something was definitely wrong with me. Many a time even the thought of adopting a child had crossed my mind.

I had watched close friends who married after we did become parents. Some of them became parents even before they celebrated their first marriage anniversary. Nobody had ever pressurized me about the matter, not even my in-laws. Mr. Husband had also been understanding and supportive throughout, but his silence spoke volumes about his desire and disappointment. It had all begun to grow on me and I was becoming desperate. So much so, that I spent most of my time endlessly reading pregnancy related articles on the internet, obsessively tracking my cycles keeping tabs of my fertile window and active days, and absently wishing to be pregnant. And the pressure inside me kept building.

Being a Virgo I have a habit of planning everything beforehand, and even before I got married, I already had a list of names of babies with me. I had even thought about the innovative ways I would break the news with family, friends and Mr. Husband, of course – a different way for each one. I had planned it all. Now all I needed was to be pregnant, and that was the one thing that wasn’t happening for us. Pregnancy still remained a lost dream.

My periods have always been irregular so tracking didn’t help much; but still, I kept on tracking it to maintain my sanity intact and in the hope that I might be lucky to get one cycle right. So, though I was more than a week late and was feeling a bit off I did not suspect a thing. And looking at my past record of several negatives how could I? It had now become more of a routine.

Suddenly, with a thud sound, I was brought back to the present. As I came to my senses I realized it was the newspaper boy throwing the newspaper roll in the balcony. Without much interest, I carelessly looked back at the test that lay there at my foot waiting to be read. And as I looked at the test my eyes started to widen in amazement and I could feel my nervous heartbeats thumping hard against my chest. I rubbed my eyes to get a clearer look at it as I stood there with trembling hands and legs, gaping at the pale faint pink line, shimmering and dancing beside the dark pink of the control in front of my eyes. For an instant I was numb. I don’t know how long I stood there staring at it in surprise or shock (I still don’t recall). I was totally bewildered at the unexpected and unbelievable result. The sight of those “two pink lines” which seemed to smile at me exhilarated me to the core. I felt so alive on the spur of the moment that it couldn’t be described in words. 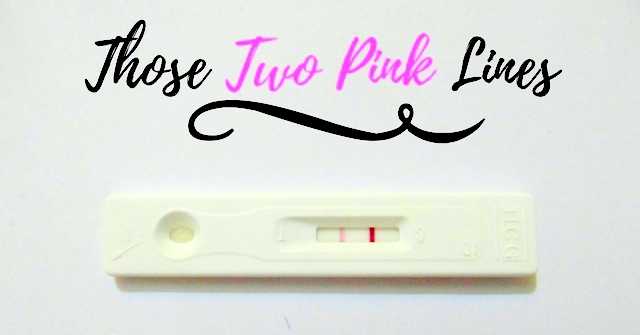 I was so thrilled that I remember even pinching myself to be sure if it was for real or I was having a dream. I wouldn’t have been shocked if it were a dream because getting pregnant had become so consuming that it had begun to haunt me. But not this time. I was so used to seeing the white nothingness of an evaporated line that those “two pink lines” amused me immeasurably. My happiness knew no bounds and it was getting difficult for me to control my emotions. After all those sleepless nights of wetting the pillow with silent tears and I don’t know after how many earnest prayers God had finally decided to shower us with His blessings.

I quickly gathered myself, washed my hands and joyously went to wake Mr. Husband up who was blissfully asleep, snoring away, still unaware of how our lives were going to change course. I had always imagined for this moment, devising several ways to surprise Mr. Husband with the “good news” and all I could do was wake him up to show him those “two pink lines” and say “Hey! You’re going to become a Dad!” (How cliché! I know). But in that glorious moment words did not matter, only feelings did. And it was overwhelmingly emotional. We hugged and rejoiced. Our lives were going to change forever, we knew it, only yet to discover it how.

And all of a sudden I was eager to celebrate Holi – the festival of colours because we got our “bundle of joy” as Holi gift. And as colourful this beautiful festival of colours is, we knew instantly that in a similar manner he is going to colour our lives with his amazing baby colours and give our lives a new meaning. And since that instant, our life canvas has been getting painted with the prettiest colours there could ever be.

Why Your Baby Hasn’t Started Talking Yet

Travelling Alone With Your Toddler/Infant: Planning and Packing Tips

How to Manage Diaper Time, Diaper-Free Time, and Rashes in Babies Above 5 Months

Parenting in the Times of the Coronavirus Pandemic

30 Diwali Wishes For Your Loved Ones

19 Weeks Pregnant With Twins or Multiples

Ruchelle Fernandes - September 28, 2020
Yoga has been becoming increasingly popular amongst people of all age groups around the world and this therapeutic, calming, and relaxing form of exercise...