Home Magazine Contributions What, When and How to Begin Solid Foods for Toddlers 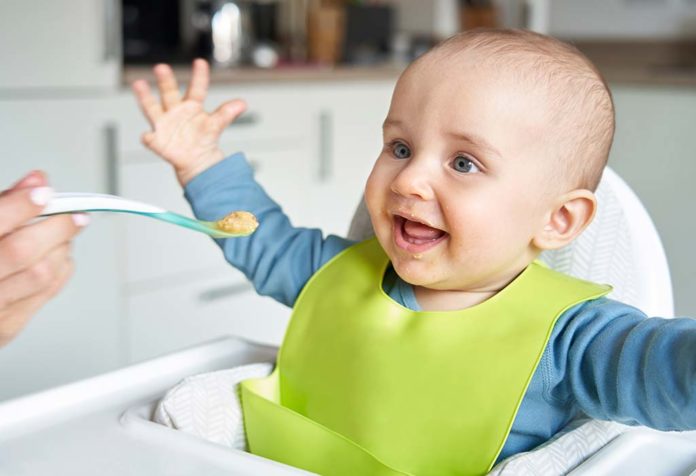 A baby’s first food is a big event not only for the baby but also for parents. Generally, solids are introduced to babies after one year of age. But that was the story of earlier times. Nowadays after five to six months of birth, parents start giving juices, soups and liquids in many forms and after that babies are introduced to solids when they reach seven to eight months in the form of fruit slices, boiled veggies and of course cereal- the traditional first solid food; probably because it is bland and it rarely causes indigestion or allergy. The commercial rice cereal made for babies is fortified with iron, a necessary nutrient after six months of life for nursing babies and those not getting enough iron in the formula. I deviated from tradition in my practice and suggested apple sauce or juice or raw, ripe banana as a first solid because some babies are unenthusiastic about cereal for a while. Speaking of lack of enthusiasm for solids, this reminds me of how puzzled babies behave towards any first solid. They wrinkle up their noses. They block their food with their tongues, push it around and make clacking noises. A spoon is a strange object! So it’s not surprising that this skill takes time to learn. The muscles of the mouth are accustomed to squeezing milk between the nipple and the roof of the mouth and then it is pushed down the throat. The baby must learn to catch the food with the tip of the tongue and move it back just like the “milking” motion. For most babies, this complex set of movements takes only a few days or a week to learn.

Now let’s come to which solid and in what order? So starting with cooked cereal, then adding strained boiled or steamed veggies, and strained stewed fruits. Hard-boiled egg whites and egg yolk is postponed to the last quarter of the first year as it may cause allergies and choking in some children. It is wise not to add salt to a baby’s foods as the desire for salt can easily become a lifelong habit which is not good. It is often convenient to give the baby the same cooked vegetables and fruits that the rest of the family is eating. These foods should be strained so that prior to one year, your baby can swallow the food with comfort and safety. Now you can shift gradually to lumpy vegetables and fruits after a year. Food preferences are usually formed in early childhood and then tend to persist. So choose your baby food wisely. I believe that a variety of vegetables, fruits and whole grains and beans will cover a young child’s needs.

Teaching Kids To Understand and Use Abstract Language