Common Reasons Why Babies Stick Their Tongue Out – Should You Worry?

Common Reasons Why Babies Stick Their Tongue Out – Should You Worry? 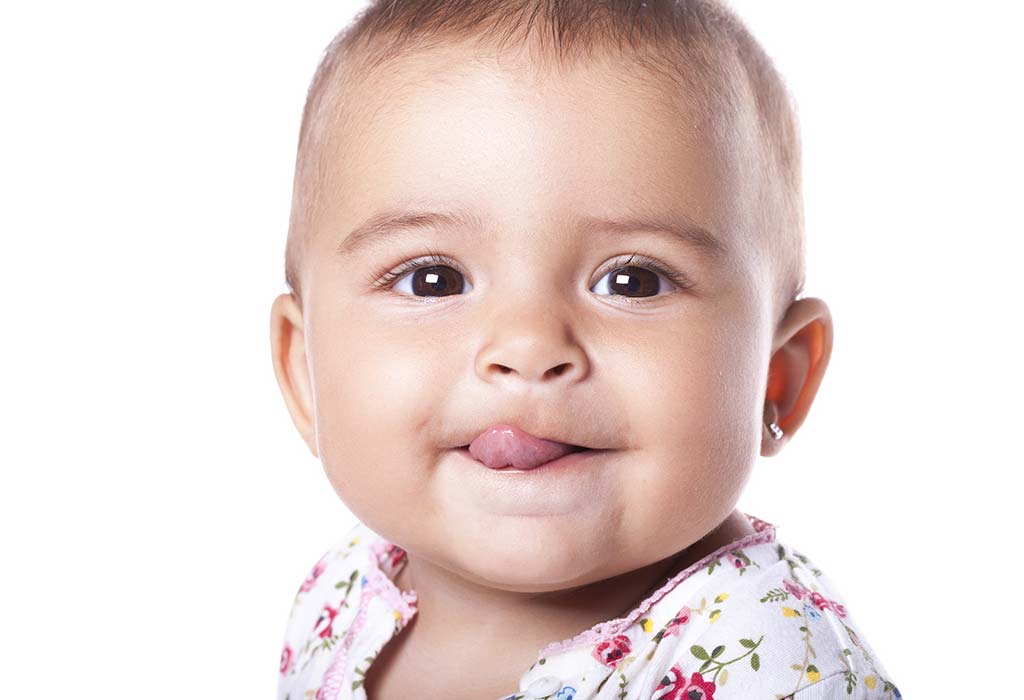 As babies are born, we discover human beings are capable of making innovative gestures to convey their needs and understanding. These little humans grasp most of our attention. Either through the blinking of eyes or sticking tongue out, they always intend to convey something through movements and gestures. If you find a newborn sticking tongue out frequently, it is more than a lovely gesture.

Video : Babies Stick Their Tongue Out – Should You Worry?

Is Sticking Tongue Out a Normal Part of Child Development?

Sticking the tongue out is a natural gesture for babies and is known as the thrust reflex. Tongue protrusion happens when the tongue goes beyond the border of the lips. It is a kind of muscle reaction that takes place in reply to a simulation. This can also be a signal for babies to show they are hungry.

It helps kids to latch properly while feeding. As they grow up, they realize that they can communicate through other means. The sucking reflex disappears within 4–6 months of a baby’s birth. Babies don’t have control over their body movements; thus, they can convey their requirements through tongue movement.

Why Do Babies Stick Their Tongue Out?

There are numerous reasons for babies to stick their tongue out. Let us understand the reasons behind their tongue movement:

Babies tend to imitate their elders. Whether you are trying to give a pose while clicking a selfie or just playfully removing your tongue out of the mouth, the babies will memorize the pose and do the same number of times. They do so out of fun and let us know about their understanding.

Babies, while sticking their tongues out, convey their hunger to their mothers. They also do so to convey to their mothers to discontinue feeding them further. Infant sticking tongue out during 3 months want us to know that they are hungry.

While feeding babies with semi-solid food, they stick their tongue out of the mouth. It could be that the baby isn’t ready for solid and semi-solid foods yet. Once they can swallow the food and push their tongue above the palate, they will stop doing the same. Feeding babies with solid food is a new milestone in parents’ and babies’ lives. Therefore, while there is some restraint from babies initially, they gradually become habitual to the food and eat it comfortably.

Babies often breathe through their mouths when their noses are congested, causing their tongues to stick out. They find normal breathing difficult during cold, cough, allergies, adenoids, or inflamed tonsils.

Babies usually suffer from gastro problems since they have only milk as food. This causes pain in their stomach which makes them uneasy. Due to this, some babies may stick their tongues out.

When the number of tissues in a baby’s tongue increases, it is called Macroglossia. This condition makes the tongue stick out since the enlarged tongue can’t fit in the mouth. An enlarged tongue can occur from birth, or it can develop gradually over time. This abnormality can be for many reasons, such as acromegaly (growth hormone increment), Beckwith-Wiedemann syndrome, mucopolysaccharides, and congenital hypothyroidism (inadequate thyroid hormone).

In Micrognathia, babies have small chins and jaws, resulting in difficulty containing the tongue inside their small mouths. This condition disappears with time as the size of the mouth increases and the face muscles develop. Cleft palate and Down syndrome like trisomy 13, trisomy 18, Pierre Robin syndrome, etc., are the reasons for micrognathia. Muscles around the lower jaw aren’t well developed, resulting in the sucked chin. DiGeorge syndrome is another condition where the small-mouth condition is observed.

It is a low muscle tone disorder that affects the development of each muscle in the body, including the tongue. We hold our tongue back in the mouth, which reduces the space occupancy of the tongue in the mouth. Without the tone, the tongue will rest in a completely relaxed state and stick out of the mouth. Rett syndrome, Prader-Willi, and many other down syndromes show hypotonia.

Extra mass growth around the tongue forces the tongue to stick out. Thyroglossal duct cysts are formed near salivary glands. These cysts appear and vanish on their own without any treatment.

Thrusting of the tongue is one of the general types of orofacial myofunctional disorder. If the tongue sticks out due to an OMD, it is an abnormal tongue position while in a relaxing state. Hereditary reasons, congenital problems, and thumb-sucking habits for a long duration can lead to the development of this disorder.

12. Baby Sticking Tongue Out After Feeding

You will commonly find a baby sticking tongue out after feeding to convey they are full and don’t want to eat anymore. You should observe your baby’s body language to understand whether they are full or want to feed more. Teething can also cause your baby to stick their tongue out at 6 months. Teething causes redness and swelling, thus causing discomfort to babies. While teething is a considerably normal reason, there are instances when you need to consult a doctor. Some of these instances include:

Baby sticking tongue out at 6 months can be an adorable gesture for everyone to enjoy. As a parent, it is always challenging and pleasing to understand your baby’s behavior. But once you understand, it will be the world’s best experience anyone can get. Try to enjoy your baby’s little movements, expressions, and gestures without worrying much. Babies try to imitate the facial expressions of people they see around them. If you see a baby’s tongue out all the time, it can turn out to be an issue of stress that you can resolve by visiting a pediatrician at an early stage.

1. Do Down Syndrome Infants Stick Their Tongue Out?

2. Can Sticking Tongue Out Indicate Teething In Babies?

Sometimes, yes. Your 6-month old baby might stick the tongue out because of the discomfort caused by the redness and swelling of teething. They try to lower the pain of teething by sticking their tongue on their germs. You will also find excessive drooling, taking things in the mouth, red and swollen gums, and irritating behavior by babies while they experience the stage of teething.

3. Is Sticking Tongue Out Related to Autism?

Autism is a kind of development issue that can be identified with lacking interaction and communication with people. You will also find repetitive and restrictive behavior. Tongue protrusion cannot be considered the only symptom of Autism. You should also look out for other symptoms to confirm the occurrence of Autism in your baby. Visit your doctor to identify the disorder.