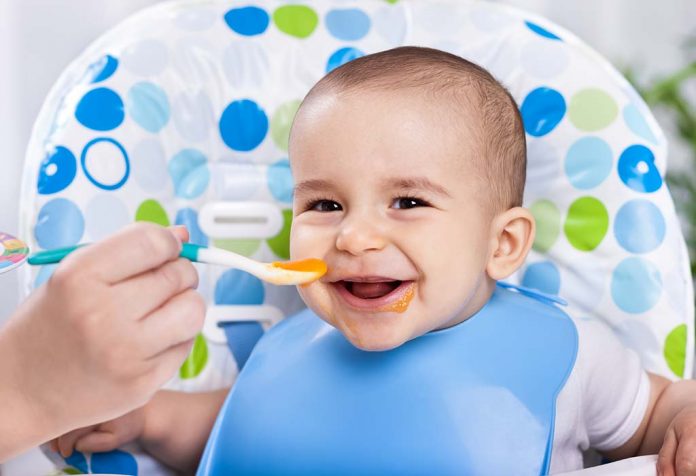 As a parent, you cannot wait to see your baby reach many important milestones. From those first adorable giggles to the first steps, your baby learns and grows more every day. But before adding those “baby-eating first solid food” pictures into your milestone picture album, you will need to learn about how the baby’s mouth works and what extrusion reflexes are. Read on to find out more about it and how it can get in the way of the introduction of solid foods.

What Is Extrusion or Tongue Thrust Reflex?

Babies are born with various reflexes that help them live through the first few months. An involuntary action that comes as a response to various stimuli is called a reflex. An extrusion reflex is the reflex motion that causes the tongue of the baby to move forward as soon as something touches his lips.

Why Do Infants Have Thrust Reflex?

The extrusion reflex helps babies to latch onto a nipple and also helps prevent them from choking. This reflex can be seen when the baby’s tongue is depressed or touched in any way by an object like a spoon. In response, the tongue will thrust out of the baby’s mouth, in order to prevent everything except a bottle or a nipple.

When Does the Extrusion First Develop in a Baby?

Extrusion reflex is present in most newborn children though we do not know exactly for sure if the baby first develops it in the womb. During the early months of the infant’s life, tongue thrusting is very important since the muscles will not be developed enough to swallow semi-solid or solid foods. 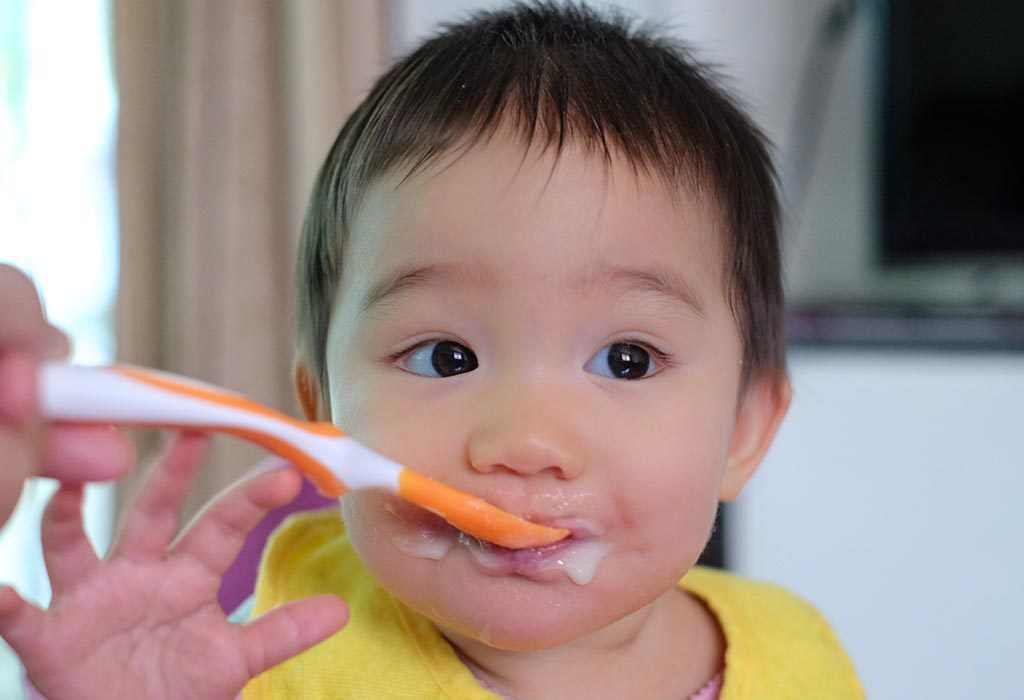 Extrusion reflexes can be seen right after the baby is born and will be present for around 4-6 months. Therefore, for introducing solid foods, it is recommended to wait for at least around 4 months. Before this, the gag and extrusion reflexes will still be very strong. Every baby develops at a distinctive pace, so it is important to follow the signs your child shows of his readiness to eat solid foods.

You could do the tongue-thrust reflex test by simply offering him a clean spoon like you are trying to feed him.

You could also look for the following signs for introducing solids into your baby’s diet:

If your child already shows all these signs but still does not want to eat solid foods, then you could try again after a few weeks. When the extrusion reflex in a baby is very strong, it will take around 6 months to go away.

If it was a premature birth, then you may have to wait longer to begin solid foods, and it is best to speak to your predication or doctor about it. In general, for such cases, you will be able to give solids in a timeline the baby would follow if he was born on the due date. For example, a baby may have to wait until around 4 months and 3 weeks and can be given solids before 6 months and 3 weeks, if he was born 3 weeks early.

How to Deal With Extrusion Reflex

There is nothing you can do to make changes to the extrusion reflex of the baby because it normally goes away on its own when he is around 4 to 6 months old (This is one of the biggest reasons why mothers are recommended to exclusively formula-feed or breastfeed their baby during the first 6 months after birth). However, in some babies, the reflex may take a longer time to go away and there is nothing much the parent can do.

One common misconception between extrusion reflex and feeding solids is that many mothers think that the baby pushes out solid foods because he is a picky eater or that he does not like the taste. It could be a sign that the baby’s swallowing mechanism has not developed enough and that he is not ready to consume solid foods. This is one reason why the loss of extrusion reflex is considered to be a major sign of the readiness of the baby to begin eating solid foods.

Do not worry if your child keeps spitting out solid foods a lot. Wait for a few more weeks and then try to give them solid foods. Every time you feed him solid foods, ensure that the baby is sitting in an upright position. This can be done by making your baby sit in a baby-chair.

When Does Extrusion Reflex Go Away?

It begins to fade between the months of 4 and 6 after birth and is considered to be a normal part of development. Babies also start eating solid foods at this stage. The disappearance of this reflex will help the baby to wean from breast to the bottle, and learn to eat softened table foods, cereals, and purees.

Some children may show extrusion reflex into their childhood or older babyhood. If this is the case with your baby, then maybe it is time to speak to your doctor about it. If the baby keeps tongue thrusting even after infancy, then it may cause problems with the alignment of the teeth. It could also create speech development problems.

Extrusion reflex is a normal part of development in children and as long as it goes away when the baby gets older, it will not have any long-term effects. However, if your child is a toddler or an older baby and still shows this reflex, then it could cause him to develop a lisp while speaking or have poor alignment of teeth. If your older children are showing abnormal tongue-thrust then it is time to talk to your pediatric dentist or your paediatrician. These symptoms would include:

An extrusion reflex (infant tongue thrust reflex) is a normal thing that every baby shows during the first few months. It could also be considered as a good indicator that your baby is developing normally and healthily. However, if you feel like the reflex is not letting him begin solid foods, then talk to your doctor about it. In most cases, the baby just requires some more time to begin learning a new skill.

Habit of Comparing Yourself to Others? 5 Ways It is Stopping You from Becoming Successful!