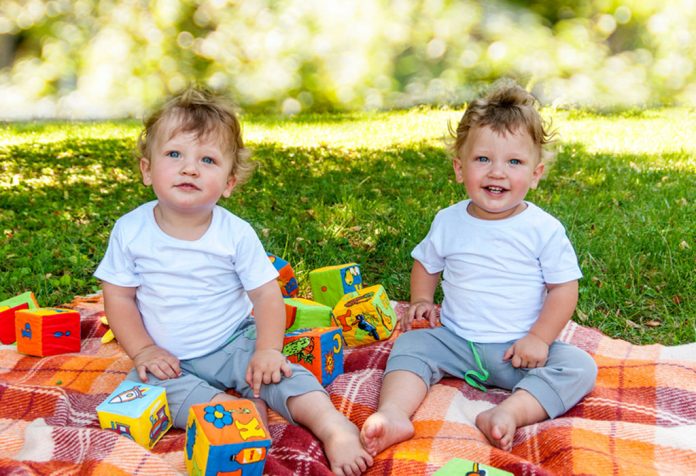 If you are expecting twins or are already a parent to twins, then your joy is undoubtedly double than that of others! However, it is also sure to be much more demanding and would require a more considerable amount of effort on your part to raise two children of the same age at the same time. Quite a few well-known celebrities have lesser-known twins waiting in the wings. Some examples are Scarlett Johansson who has a twin sister Hunter, Ashton, Kutcher and twin Michael, as well as Gisele Bundchen and Patricia.

Twins have also been a source of fascination not just to their parents but also to the world in large as well as the scientific community. There have been countless studies analysing their behaviour and lifestyles. One thing you are sure to have heard about twins is that they can be either fraternal or identical. While identical twins have the same DNA, fraternal ones do not. This does not necessarily mean that identical twins will look alike though in most cases they do. Here are some more interesting facts about twins that you may not have known:

1. Yes, You Can Tell Twins Apart

One of the not so well-known facts about identical twins is that there are ways of telling them apart. The first one is through their fingerprints as these are unique to every individual and twins are no exception. Though identical twins may have the same DNA since they are exposed to different areas of the womb during their development, there are bound to be differences in their ridges and whorls on the fingertips. Another way of telling twins apart is by looking at their navel. Since they are bound to be scars following the detachment of the umbilical cord at birth, these will be distinguishable.

2. Twins Can Have Different Fathers

Yes, you read that right! One of the more weird facts about twins, this can happen when a woman releases two eggs in a month as opposed to one. When the two eggs are fertilised by sperms from different men, then the woman can give birth to twins with different fathers. But this is a rare phenomenon.

3. The Twin Gene Is Not a Myth

You might have heard of some families with many sets of twins over the generations. The reason for this is believed to be something known as hyper-ovulation. In hyper-ovulation, a woman releases more than one egg each month. It is believed that the gene which causes this kind of hyper-ovulation is inherited and thus, the offspring of twins are more likely to have twins as well. Twins of this type are fraternal since they are born from two separate eggs. Identical twins are born from a single egg splitting in half and this is not a genetic occurrence.

4. They Have Their Own Language

If you see twin babies seemingly conversing among themselves and mistake it for the babbling common among infants, you couldn’t be further from the truth! According to a research article in the journal Institute of General Linguistics, twins speak in a language known as cryptophasia that only they can understand. This language is made of inverted words and onomatopoeic expressions (sounds such as ‘boo’, ‘choo” etc.). It is estimated that nearly 40% of twins have a private language, but it tends to disappear as they grow older and learn other languages.

5. Increased Life Span for Twins and Their Mothers

In 2016, a study conducted by the University of Washington indicated that twins had a longer lifespan than others. Apparently, the support that twins provide to one another in all aspects helps in their longevity. Another study conducted by the University of Utah showed that women who gave birth to twins enjoyed a few years more than other mothers. Earlier research conducted on women who lived between 1807 and 1899 had also indicated that mothers who give birth to twins are stronger and healthier and are likely to live longer than mothers of singletons. It also revealed that mothers of twins had a higher fertility rate as well.

6. There Are More Than Two Types of Twins

Besides identical and fraternal twins, there is a third category known as mirror-image twins. This can be seen in around a fourth of identical twins. This happens when the twins develop in the womb while they directly face each other, which makes them reflections of one another. In such instances, one twin may be right-handed while the other is left-handed or birthmarks may be on opposite sides of the body. Usually, mirror twins are formed when a single fertilised egg splits over a week after conception occurs.

7. Twin Bonding Happens in the Womb

A study by researchers at the University of Padova, Italy, has found that twins reach out to each other inside the womb as early as 14 weeks of gestation and by 18 weeks, they touch each other more than their bodies. In fact, they spend an estimated 30% of their time feeling and stroking their twin. And they also are known to be gentle when touching their sibling’s eye area which is sensitive and needs to be handled with care.

8. Twins Can Have Different Skin Colours

9. Twins Can Be Born Many Years Apart

This usually occurs in cases of in vitro fertilization (IVF) where the embryos are formed in a laboratory and then introduced into the mother’s womb. In such cases, usually, more than one embryo is prepared, and some people choose to get some of the embryos frozen for use at a later date. Thus, if you get pregnant with IVF this year and then again with frozen embryos a couple of years later, then technically your twins will be of different age.

10. One Twin Can Eat The Other

This is termed as the ‘Vanishing Twin Syndrome’ where one of the babies does not survive early in the pregnancy. The embryo is absorbed by either your body or the other baby’s body and does not lead to any complications during the rest of the pregnancy. This happens quite often because statistically, 1 in 8 pregnancies starts out as a twin pregnancy while only 1 in 70 results in the birth of twins.

11. Being Left-handed Is a Twin Thing

12. Twins Do Not Have to Share the Same Birthday

Though not a common occurrence, complications during the pregnancy or concern for the health of the babies can lead to the premature birth of one of the twins. For instance, if your water breaks much before you are due, one child might be extracted while the other stays inside for a few more days or weeks. Though the average time between delivering twins is 17 minutes, the most prolonged duration on record is 87 days.

13. Identical Twins Might Just Get Away With the Perfect Crime

The DNA pattern of identical twins is a 99.9% match to each other. Their brain wave patterns are also nearly identical. This can make it tough for forensics to pin down crime on one of the twins decisively with DNA alone. However, fingerprints and teeth marks are not identical, and this can help differentiate between identical twins. In fact, there are many real crime stories involving identical twins and how they got away with breaking the law of the land.

Distinguishing between identical and fraternal twins is not easy. Of course, if the twins are of different genders then they are fraternal without a doubt. Sharing a placenta or amniotic sac makes them identical but looking similar does not. So, the easiest way to make sure is by getting them tested. This test involves getting a swab from the cheek of each twin which is then sent for an analysis known as the Zygosity genetic testing. It is mainly used for gaining knowledge about specific health conditions towards which the twins may be vulnerable.

The possibility of having twins is dependent on certain genetic factors. But there are also some other things that can increase your chances of having twins such as consuming a significant amount of dairy products on a regular basis. Taller women are also at a higher chance of conceiving twins due to the presence of a more substantial amount of Insulin-like Growth Factor (IGF), a protein released from the liver. Raising twins or multiple children can make you feel like you are on a roller coaster each day. But it is a fun ride with all the excitement besides being an experience that not everybody can experience.

How to Get Rid of Pimples on the Chin

Health and Nutrition Tips During Pregnancy

Baby Girl Symptoms during Pregnancy – How True Are They