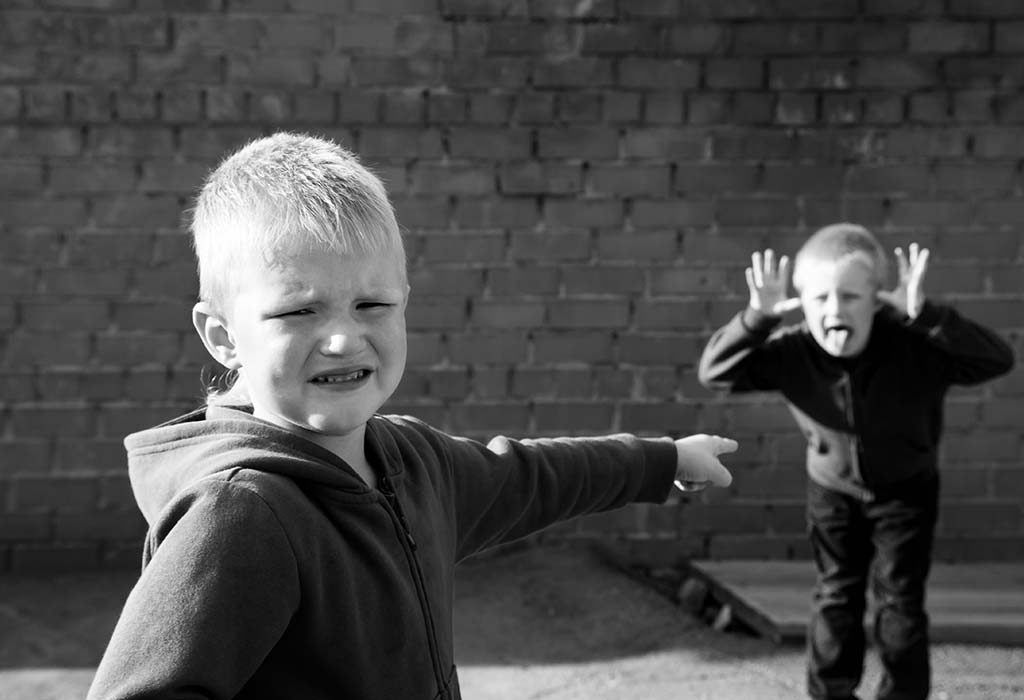 Tattling is quite a common behaviour in school-going children. Kids tattle on their friends, classmates, parents, and even other adults. While it is annoying, it is a natural part of their development as they begin to understand the rules of fairness and social norms. Although all the kids tattle to some extent, some do it more than others. Read on to know what tattling is, if it is okay for kids and how you can deal with kids who are compulsive tattlers.

Tattling is when kids report on someone for breaking the rules during play or other activities, generally to get the other person into trouble. It is the usual “He pushed me.”, “They are being mean.”, “They won’t let me have a turn.” and so on. Some parents may need to understand the difference between tattling and telling. These pointers will help you differentiate between the two:

1. It Is Not the Same as Telling

While tattling involves trivial issues, ‘telling’ is when kids report to adults about someone’s behaviour that is causing harm. Tattling is unproductive and can sometimes be mean-spirited while telling is good in the civic sense and shows concern for others.

Tattling is when a child says “She touched my lunchbox!” and telling is when he says “She took my lunch!” Another example of tattling is “He took the building block I wanted to use” while telling is “He pushed the block tower on top of me”. In both the tattling scenarios, there was no danger or unsafe situation to either of the kids while in the telling examples, there was harm caused or intent to harm displayed by one of the children.

Minor problems associated with tattling can be solved by kids. Therefore, children must be encouraged to work it out among themselves instead of tattling to their parents. You can use examples to help your child understand and deal with tattling.

Why Do Kids Tattle?

It is essential to understand the driving factor behind a tattle before we understand how tattle-telling works. Before kids are old enough to understand the consequences of their action, rules need to be set to govern their behaviour. Young kids tend to be egocentric and cannot understand the perspectives and experiences of others. And, until their empathy develops, their behaviour needs to be governed by rules. This is the reason why it is easier to tell your son to share his toy with his friend because it is a rule for everyone to share. It is harder to explain to them that others feel disappointed when he doesn’t share.

Rules also work well with children because their moral and cognitive development is advanced enough for them to follow simple instructions. They are motivated by the praise and love that comes with following the rules and instructions when they abide by it strictly. Tattling, hence, is a behaviour that usually starts when other children or adults break the rules. Kids believe that tattling is the right thing to do when others break the rules so that they can be corrected, and they expect praise for it. Tattling comes as a natural response when kids are constrained with rules in a group, but they will have to learn that it is unnecessary in every rule-breaking instance.

There are times when kids use tattling to get more attention from the elders or to get someone into trouble. In older kids, the situation can become more complicated when they tattle for reasons other than rule-breaking. While explaining that there are exceptions to rules and expecting them to understand that tattling is not a solution can be illogical, it builds their intuition in the long run so they can discern when to tell and when not to tattle.

What Do Kids Tattle About?

In an observational study conducted in 2010 on forty children aged 3 to 4 years, Gordon Ingram and Jesse Bering of Queen’s University, Belfast documented 354 instances of tattling across 30 days. The average rate of tattling was a little over one per child every day. In some children, the tattling rates were zero, while others were more than six.

Tattling most commonly occurred over disputes about property, rule violations and physical aggression. While over ninety percent of the tattling reports were verifiably true, a majority of the rest were accidents mistaken for deliberate meanness. About three-quarters of the tattling instances were intended to get help for themselves and/or get the other kids in trouble. About sixteen percent of tattling focused on enforcing rules. It was also inferred that although preschoolers can lie, instances of tattling were not deliberate lies most of the times, and lies were a very rare occurrence.

Teaching Kids When They Must Tell and Report

There will be situations that fall outside of normal tattling that children should inform adults about. These instances are when telling can help them or someone else from getting hurt or save them from danger. It could also stop someone who is destructive or hurtful on purpose.

Bullying is one such example that is an exception to the “no tattling” rule. Children should be encouraged to tell every time they witness bullying or have become the victims of it. Teach your child what bullying means so that they can recognise it when it happens and feel empowered to speak up against it. However, it is also important that your child learns to think before telling something and consider many other factors that they would have mistaken for bullying. They need to be able to discern deliberate meanness from an accidental action.

The next set is to teach your child to ask if he tried to fix the problem on his own before approaching an adult. More importantly, teach the kid to ask himself whether telling will only get the person they are tattling on into trouble or it would really help someone. For this, you need to explain the difference between tattling and telling and wait for your child to apply it intuitively. Be patient while your child is learning to differentiate between a dangerous situation and one that isn’t. When your little one comes to you to tell something, listen to him attentively. Allow some room for mistakes as he learns how to tell and not to tattle.

How to Discourage Tattling in Kids

Once you know why children tattle, you can start to teach them the difference between tattling and telling. Here is how to go about it:

1. Point Out the Tattling

Every opportunity can be a learning experience, and if you and your kid can catch another child tattling, use it as a teaching moment. Bring the behaviour of the other child to his attention and ask what he thinks about it. Examine if your kid understands whether the act was tattling or telling and ask what the other child could have done instead. You could also use your own child’s tattling moment as a teaching lesson by asking him to stop and examine what he did instead of jumping straight into labelling it as tattling.

Kids are quite literal when it comes to enforcing rules and seldom understand the exceptions. It can sometimes be about making the other child look bad and derive a sense of justice out of tattling. In such circumstances, where it is fair to bend the rules, patiently explain that sometimes, people cannot follow the rules. Although it is upsetting to your child, he has to allow others to bend the rules so that the game is fair. What’s important above all is while your child cannot control how others behave, he should always strive to keep his action fair and just.

It is always best to share your expectation about tattling and telling. Explain that while you don’t appreciate your child tattling on trivial things, it is important that he speaks up about something hurtful or dangerous. You wouldn’t want your child to complain every time a friend steals a crayon, but you definitely would want to know if the friend is pulling the dog’s tail. The difference between stealing a crayon and pulling the dog’s tail could be subtle to children, but understanding which act is harmful takes a while to learn. One trick to help your kid decide is to tell when he feels scared, threatened, nervous, or hurt by another child’s action. Your kid will then handle trivial things such as name-calling or taking a pencil, by ignoring, relaxing and focusing on his task.

How Parents Should Respond to Tattling

If your child is a tattletale, here are some productive ways to respond to them:

When children tattle, the simple act of listening and affirming their emotion can make them feel better or even change their stance. By empathising with your kid, you show that you are willing to listen. You could also offer a simple solution afterwards that he can use to fix the problem and only intervene if it is serious.

2. Distinguish Between Trivial and Serious Issues

Set clear boundaries about what constitutes tattling and telling. Tattling involves a number of trivial issues, which your child can learn to solve without your intervention. Telling, on the other hand, involves serious instances of misbehaviours that need adult intervention.

Ultimately, the goal is to teach your child to solve problems with his peers in healthy ways. With every available opportunity, sit with your kid and discuss how he could have handled the situation better and what he can do in the future.

Tattling behaviour in children is often in response to their peers or adults breaking the rules or getting someone in trouble. To overcome tattling, children need to be taught the difference between tattling and telling and how to react to trivial issues as opposed to serious ones.