Child Bullying – Why It Occurs and How to Deal With It

Child Bullying – Why It Occurs and How to Deal With It 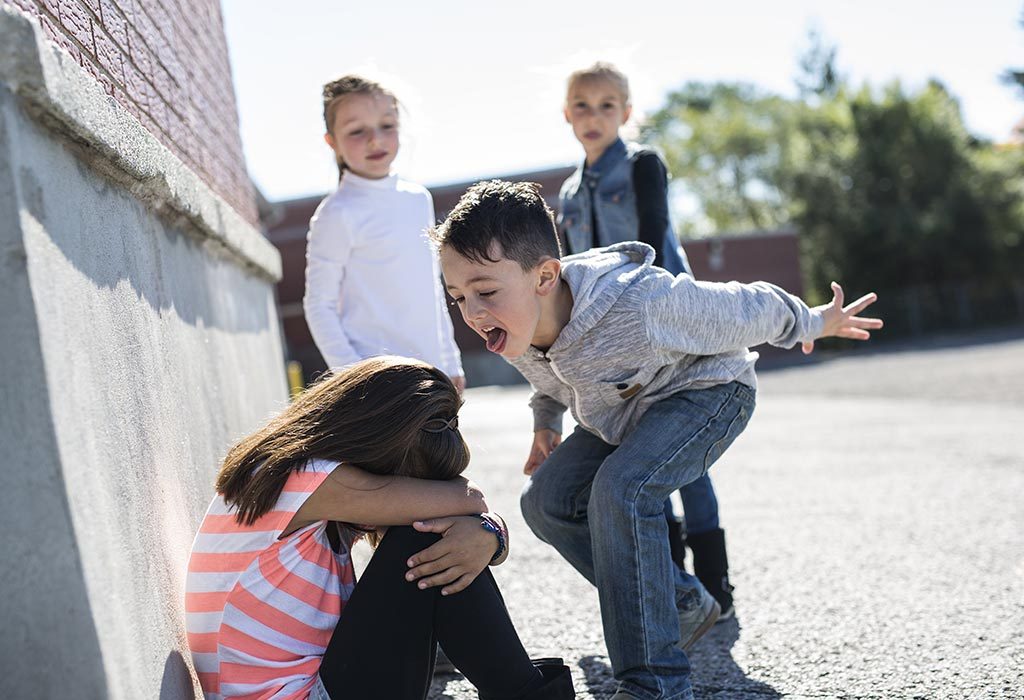 The tendency to be violent and exhibit power are traits that are present in every human being. These start manifesting slowly right from childhood, as children do not yet have full grasp of the concept of what’s good and what isn’t. Bullying in children usually begins on a general note when they’re young, but can develop into quite serious issues later on. This then starts expressing itself not just in verbal forms, but also in the form of physical violence and fights.

Why Do Kids Bully?

Bullying is nothing more than a display of power, achieved to gain a temporary status of superiority over a group of children, but especially a particular child.

As aggressive as the behaviour might be, bullying can, at times, be hard to quickly pinpoint. This is because not all bullying involves a child beating up another. There are various forms of bullying, which are:

This is the one that can be easily observed and identified. Physical bullying can take the forms of children beating up a child, obstructing him by pushing him around, breaking his toys or his objects, pushing him needlessly while playing a sport, and so on.

This could be demarcated as the initial stage of bullying. For many children, this is how bullying usually begins before it starts taking on more severe forms. Verbal bullying can be observed when a particular child is given an offensive nickname, abuses are hurled at him and his family members, and so on.

This type of bullying is quite difficult to notice and even be realized by the victim himself. Such bullying is rarely aimed directly at the child since most of it takes place passively. Various rumours might be spread about him, circumstances might be created that cause him embarrassment in public, and he might be slowly alienated from a group of friends, leaving him along by himself.

This is a new one in today’s age but follows pretty much the same principles as the usual ones. The communication medium is different for this, which is more dangerous since the bullying can now be shielded by anonymity. Getting offensive emails, texts, or social media posts, that can be threatening at times, or post photos and videos of embarrassing moments shot on camera, all fall under this category.

Signs Your Child Is Being Bullied

If your child is being bullied, it might not be evident right away until it escalates to a severe point. There are certain signs you can look out for, which might indicate so.

Bullying in childhood has long-term effects and can be quite debilitating to lead a normal life in the future.

What Can You Do If Your Kid Is Bullying Other Kids?

The worst scenario could be that your kid himself is the bully, leading you to feel quite angry and dejected about it. But here’s what you can do to correct the action as soon as possible.

1. Bring the Bullying to His Notice Right Away

The moment you realize that your child has bullied someone else, it is extremely important to have that discussion with her as soon as possible. The instantaneous reaction makes it evident to him that not only you know about it, but it is quite a serious issue. Let him know that it is the worst kind of behaviour and such instances will not go unpunished.

2. Find the Source of the Motivation for Bullying

It is better to treat the cause than to punish the child. Therefore, you need to figure out why your child chose to bully that particular kid or anyone for that matter. It might be so that your child has been bullied previously and he is emulating the same actions. This would require not only being firm with his bullying but be understanding and empathetic about what he has suffered. At other times, your child might bully someone just to be popular or be accepted by another group. This requires explaining the importance of having right relationships and friendships in life, which could take a while. Do remember to reinforce the absolute unacceptability of bullying.

3. Bullying Is a Voluntary Action

Even though it might be something your child did without thinking, he needs to know he made a voluntary choice to go ahead with it. Let him understand that his actions have consequences and he needs to bear the responsibility for it. Just like good behaviour is rewarded, bad behaviour has its own punishments.

Let the disciplinary action take away the element that gave your child the power to do it in the first place. If he has resorted to sending abusive texts to someone, then retrieve his phone or lock the computer for a period of time. If he did that with a group of friends, ground him for a week or so. If being in a club or a sports team gave him a false sense of power, talk to the coach to suspend him for some time.

If, at times, you cannot form a logical link for the bullying and the consequence, opt for taking away privileges. Cancel a family trip you might have planned, or take away the video game console. This can be done in multiple forms for things he has an affinity for. Let it be clear to him that bullying will not be accepted in any form. Be sure to not give in to his apologies or crying dramas, and keep the privileges away until a specific period of time.

At times, your child’s school might decide to take disciplinary action against your child, too. While this can be quite difficult to digest, it is necessary for your child to face this as well. Don’t try to rescue him from it, since it might give him the wrong message of you protecting his bad decisions, and further emboldening him to repeat those.

Bullying can even be a way of distracting pent up energy. Check if your child has anger issues or troubling handling impulses, or undertakes such behaviour to be popular. Teach him new skills and try to get him to form a new group of friends.

Humiliating your child for what he did can dig deeper into their psyche and cause them to form a grudge against you. It is necessary to be a disciplinarian and not an enemy. Avoid publicly shouting at your child, or telling others about what he did. Be firm and disciplined in private and give him a chance to improve.

This takes some time but helps your kid understand how they might feel if they were bullied. Let him understand how it might feel to be treated that way. A change in perspective can help light a bulb in their brain and effectively mitigate chances of them bullying again.

Although your child might learn from this incident, it isn’t necessary that he won’t bully again. Keep a track of his behaviour and stay in the know by keeping in touch with other people. It might take some time, but he will correct his actions appropriately.

What Can You Do If Your Kid Is Being Bullied?

If your kid becomes the victim of bullying, it is necessary to put a stop to it by:

Bullying is an unfortunate habit and it all stems from our very human nature. In order to know how to help your child deal with bullying, it is necessary to see things from his perspective and understand why he would be the target. By helping him develop confidence and giving him support, you can ensure a safe and enjoyable childhood for your little one.