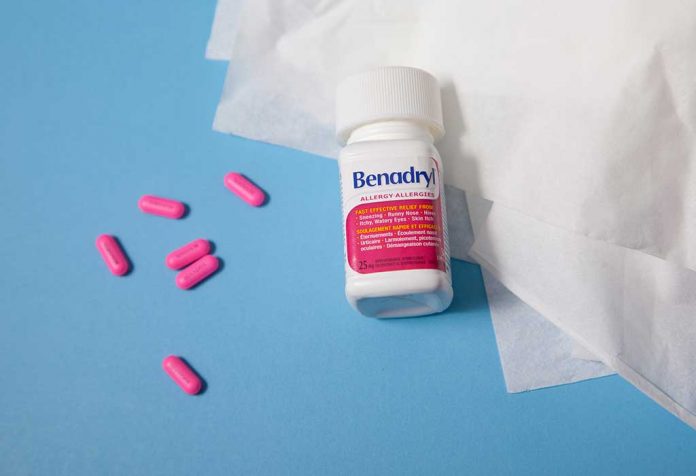 Benadryl, manufactured by Johnson & Johnson, is an over-the-counter drug that is used for allergies. It is also referred to as diphenhydramine and is a kind of antihistamine that aids with seasonal allergies by reducing allergy symptoms. Benadryl is supposed to be taken in prescribed doses, and an excess of it can cause severe damage to the heart and cardiovascular system.

A challenge on Tiktok encouraged the intake of Benadryl tablets in excess to produce hallucinations. While hallucinations or clinical delirium can be a side effect of overdosing diphenhydramine, it also causes severe effects on the heart and can potentially result in cardiovascular failure. Therefore, it is vital to know the proper dosage, side effects, and precautionary measures against overdosing Benadryl.

What Is the Benadryl Challenge on Tiktok?

The Benadryl challenge on TikTok encourages users of the platform to take excessive amounts of Benadryl, i.e., diphenhydramine, to produce hallucinations. Benadryl has been known to cause drowsiness, but it can elevate the heart rate and blood pressure and result in arrhythmias when taken in excess. It affects neurotransmitters in the body and can cause seizures.

You can find the recommended dosage of Benadryl on the Benadryl website. Children between 6-12 years of age should take only one tablet every 4 to 6 hours, and persons over 12 years of age can take up to 2 tablets. You should consume no more than 6 doses of Benadryl in a 24-hour period. The challenge on Tiktok encourages users to consume 12-14 tablets, which is way above the prescribed limit and can thus be seriously detrimental to their health. Benadryl overdose can cause overheating, dehydration and in severe cases, it can even cause seizures, delirium, coma, psychosis, and death.

Several teenagers who performed the challenge experienced heart problems almost immediately after consumption. In August 2020, a 15-year-old girl in Oklahoma sought to perform the challenge and died after overdosing on Benadryl.

What Happens When You Consume Too Much Benadryl?

Benadryl was approved as an antihistamine in 1946, and abuse of diphenhydramine is not a novel concept. It has been used for self-harm as well. Benadryl can cause drowsiness, and an overdose can result in a long list of mild and severe symptoms.

Can You Even Die from This?

Yes, you can also die from performing the Benadryl Challenge. There have been reports of people needing to be hospitalized after overdosing on Benadryl. The 2018 Annual Report of the American Association of Poison Control Centres’ National Poison Data System stated that in 2018, there were 23 pediatric deaths as a result of diphenhydramine exposure. The Food and Drug Administration (FDA) in the United States has issued a strong public warning against it. The warning states that over-the-counter allergy medication diphenhydramine consumption can result in severe heart problems, seizures, coma, and death. Performing the Benadryl challenge can be fatal, and parents should ensure that they keep such medications out of the reach of children. Moreover, the challenge is factually inaccurate as Benadryl mostly causes drowsiness and sedation rather than a “high.”

What Should Parents Do?

It is common for children and teenagers to be influenced by challenges on social media. They may be unaware of the effects of such challenges and need to be protected from them. However, there are certain precautions to prevent an overdose of medications like diphenhydramine that have life-threatening effects. Here are some preventive measures that parents can undertake:

There have been numerous challenges going viral on social media platforms which are fun but can sometimes be detrimental to health. Parents need to be aware of such viral challenges and the dangers they pose to protect their children’s health. Sometimes, it can even be necessary to monitor your child’s social media habits because their lives are more important than their privacy.

When is the Right Time to Announce Pregnancy?