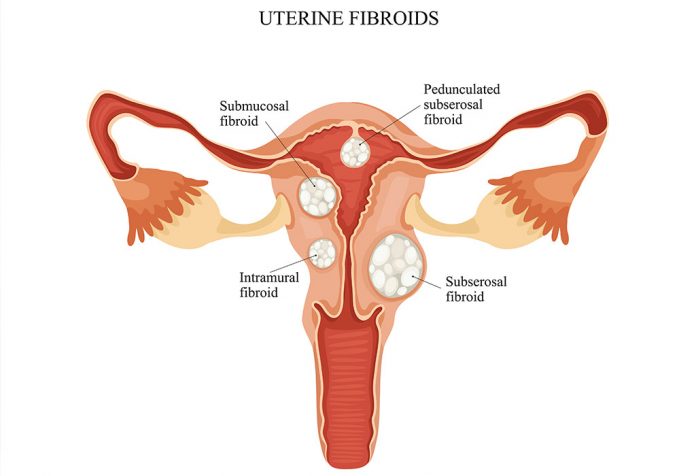 Fibroids are benign tumours that grow out of the cells that make up the uterus. Any woman of reproductive age can develop them, and it is estimated that up between 50% – 80% of women can have one in their lifetime. Although the cause of fibroids is unclear, there are factors such as hormonal levels, genetic factors, race, obesity etc. that play a role in their growth. Fibroids in some pregnant women can cause complications such as miscarriage, low birth weight, preterm labour, etc. and hence need to be treated before conception. Read further to understand what fibroids are and their effects on pregnancy.

What Are Uterine Fibroids?

Also termed as Myomas or leiomyoma of the uterus, uterine fibroids are non-cancerous tumours that range in size from as small as a pea to as large as a grapefruit. Fibroids can grow into the uterine cavity, within the uterine wall, or outside of the uterine wall, and women can have them in one or more of these locations. A fibroid or a cluster of fibroids in the uterus that have grown to a large size or are growing on the outside of the uterine wall can displace the uterus to an abnormal position. This could put pressure on internal organs such as the intestine and the urinary bladder leading to symptoms such as fullness, constipation, frequent urination, backache and pelvic pain. Fibroids are also known to cause heavy menstrual bleeding and interfere with fertility. Occasionally they could cause complications during pregnancy. Uterine fibroids are almost always benign tumours of the uterus no matter how large they grow in size, and having fibroids does not increase a woman’s risk of cancer. It is estimated that fibroids usually develop prior to pregnancy. Most women are unaware of it until they get an ultrasound scan or a pelvic exam.

What Are the Types of Uterine Fibroids?

Fibroids are classified based on where they grow in the uterine region.

These fibroids grow within the muscular wall of the uterus and are the most commonly occurring type. They tend to grow large in size and deform the uterus, making it full. Their presence can obstruct the egg from being fertilised and cause infertility. Intramural fibroids also cause heavy bleeding during the menstrual periods.

These fibroids occur on the outside of the uterus and grow into the pelvic region. They remain attached to the uterus by a small stalk-like tissue as the fibroid grows. Subserosal fibroids can put excess pressure on the internal organs as they grow and cause physical discomfort.

These fibroids, although rare, grow in the wall of the cervix and can cause complications during labour. What Are the Causes of Uterine Fibroids During Pregnancy?

What leads to the growth of fibroids is not exactly known, but there are a few known causes of fibroid during pregnancy, such as hormones, genetic changes and growth factors.

What Are the Signs & Symptoms of Uterine Fibroids During Pregnancy?

Fibroids in most women are asymptomatic; a lot of women are unaware of it until they have a scan. In about a third of the women, fibroids cause symptoms such as abnormal periods and pain.

The symptoms of fibroids in uterus include:

Are There Any Risk Factors of Fibroids?

The risk factors of fibroids are not clearly understood, but what is known is that it can affect any woman of reproductive age. Other factors that have an influence include:

How Are Uterine Fibroids Diagnosed During Pregnancy?

As fibroids are often asymptomatic, they are usually discovered incidentally during a pelvic exam. If any irregularities in the uterus are found in an exam, the doctor might suggest a test for positive confirmation.

Some of the several uterine fibroids test available are:

Are There Any Complications of Uterine Fibroids?

Most women who have fibroids go on to have normal pregnancies and vaginal delivery. In some cases, the risk of a fibroid during pregnancy is higher and can cause complications depending on where the fibroids are located and how big they are.

Let’s take a look at the complication that could arise during pregnancy and delivery.

It’s important to know that the location of the fibroid largely determines the complications, if, they arise. Depending on their type, fibroids sometimes increase the risk of a miscarriage during the first and second trimester. Fibroids in the uterine cavity are the ones most likely to cause a miscarriage.

Fibroids don’t prevent women from having a vaginal delivery. However, the fibroids located in the lower part of the uterus could block the baby’s descent. In that case, a C-section will have to be performed. The same applies to when there are multiple fibroids which could prevent the uterus from contracting normally and stall the labour.

It is highly unlikely that fibroids with harm the baby. In rare cases, complications may occur if the placenta grows over the surface of a fibroid inside the uterus. This could lead to the improper supply of nutrients to the baby resulting in low birth weight or cause the amniotic sac to rupture prematurely.

How Are Uterine Fibroids Treated?

Most fibroids don’t need any treatment if the symptoms are not causing too many problems. Since there is no single best approach to the treatment, the doctor determines the best course of action involving medicine or surgery, based on the type of fibroid and the symptoms.

Medication is the simplest method of fibroid treatment without surgery. Gonadotrophin-releasing hormone analogues (GnRHas) shrink or halt the growth of fibroids temporarily and are administered as a nasal spray, a monthly injection, or as a skin implant. The GnRHas reduce the oestrogen levels in the body, and the course of treatment normally lasts between three to six months. They are usually prescribed a few months before the woman plans to conceive.

Myomectomy is the only method of surgical removal of uterine fibroids that leaves the uterus intact and is an option for women who still want to retain their ability to conceive. Myomectomy can involve procedures to remove the fibroids through laparoscopic or hysteroscopic surgery. Open surgeries are for larger fibroids that cannot be operated laparoscopically. Although the fibroid is removed, the women undergoing this treatment have a 25% probability of a new one growing in the next ten years.

Are There Home Remedies to Cure Fibroids In Pregnant Women?

There are plenty of home remedies available that can be used to shrink uterine fibroids naturally without surgery. These remedies and treatments can be included as part of a healthy lifestyle for fibroid uterus treatment naturally.

Some of the home remedies include:

What Happens to Your Fibroids After Delivering the Baby?

Immediately after giving birth, fibroids could trigger excessive bleeding, which might require a blood transfusion in rare cases. In most cases, the woman is put on supplements for fibroids to recover. In the months after the delivery as the uterus shrinks in size, fibroids could shrink in size as well and sometimes to a size smaller than it previously was.

Is It Possible to Prevent Uterine Fibroids?

There is no way to prevent fibroids unless a woman undergoes a hysterectomy. Hysterectomy, which involves the complete removal of the uterus is the only way to ensure that fibroids can never grow again. The downside is that since the uterus is removed, the woman will never be able to conceive.

Although there is no way to prevent fibroids, having them doesn’t mean that you cannot have a healthy pregnancy. With the treatments available, it is possible to keep the troubles of fibroids at bay during pregnancy.

Loud Noises During Pregnancy – Do They Hurt the Unborn Baby?

Hepatitis B Vaccine for Babies