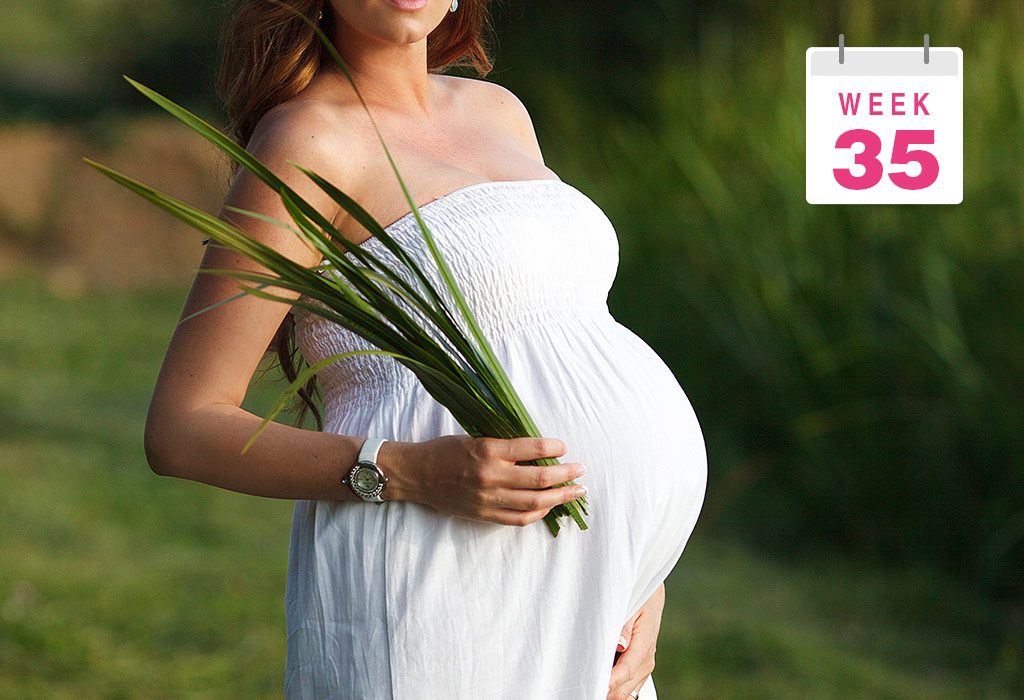 The 35th week of pregnancy is a mixed bag of emotions. Pregnant women tend to feel happy that they are almost at the end of their pregnancy. However, there is also a great amount of anxiety that is felt because of the approaching due date. The main event during this time is the baby’s gradual descent to the pelvis region as it prepares to come out to the world.

Your Baby’s Growth During Pregnancy – Week 35

Now that you’re towards the end of the third trimester, there are some finishing touches that your baby is going through such as:

Your baby may gain several hundred grams, and will continue to do so till delivery, because of the layer of fat that is growing. The fat helps in regulating the temperature of the baby and providing it with energy.

The brain will be growing at a remarkable pace and the soft spots on the baby’s head accommodate this rapid growth. Additionally, the soft head of a baby also allows for a smoother delivery as it allows your baby to move through the birth canal.

The baby’s kidneys would have fully matured by this time.

The liver is now able to function as some of the waste products can be processed by it. What Is the Baby’s Size?

When you’re 35 weeks pregnant, baby size is roughly about the size of a honeydew melon. That’s about 18 inches in length! The baby has packed on a lot of weight by now, and is about 2.3 kilograms. That’s about as heavy as a 14-inch laptop being carried around in your belly!

Some of the main body changes during pregnancy at 35 weeks include:

Most pregnant woman would have increased their weight to about 10 kilograms. The rapid increase in weight during these few weeks is because the baby is acquiring layers of fat which increases the overall weight.

You may have felt some difficulty breathing during the past couple of weeks as the baby would have constricted the lungs from fully expanding. However, in preparation for delivery, the baby begins to move down towards the pelvis reducing some of the lung constriction. You will feel more of this in the coming weeks.

Some mothers experience colostrum secretions during this time, which would mean that the breast becomes heavier.

Symptoms of Pregnancy at Week 35

Some of the common symptoms of pregnancy at week 35 include:

As the pregnancy moves towards the end of the third trimester, the baby begins to move down towards the pelvis for a vaginal delivery. However, this puts pressure on the bladder and would result in the urge to urinate more frequently.

Another side effect of the baby’s descent is that it would start applying pressure against the pelvis. This pressure may be put on some of the nerves around the pelvis which would lead to a feeling of numbness in the region.

As the baby grows, the room in the torso reduces and begins to apply pressure on some of the internal organs in the body such as the stomach. This can cause issues such as heartburn and other forms of gastronomical distress.

These are contractions of the uterus that is often confused with labour pain. While some women may not feel them, these ‘fake’ contractions can be differentiated from real contractions by the fact that they are irregular.

Belly at 35 Weeks of Pregnancy

Due to the massive weight gain during this time, the belly is large with just about anyone being able to figure out that you are pregnant. By now, the uterus would have expanded to approximately one thousand times its original size. From this week onwards, the time is crucial, as you will be tracking foetal development. In the coming weeks, the doctor can figure out if the baby has advanced to the breech position or not. If present, the probability of high risk will be explained to you by the doctor.

During the 35th week, pregnancy food mainly comprises fibre-rich food to help bowel movement and prevent issues such as constipation. As a rule of thumb, it is advisable to consume both soluble as well as the insoluble type of fibre for relief against constipation. Some fiber-rich foods include broccoli, pears, black beans, and oatmeal.

Here are some tips which will ensure you receive adequate care in this week:

What You Need to Shop For

There are a few things you will need to have at the time of your baby’s birth. The following items will come in handy during the process:

1. Diapers and baby wipes: Make sure to put these in your hospital bag as your baby will need them the most.

2. Feeding bottles: Even if you are breastfeeding, you will need these. Your doctor may suggest you offer the bottle to your baby in the first couple of days so she can learn how to take your nipple. However, most babies do learn to latch on their own so this is more of a backup option.

3. Maternity outfits: Do not forget to invest in quality maternity wear like nightsuits and maternity dresses as these too are of utmost importance during as well as after pregnancy. Check out the maternity lingerie from Bella Mama which spell comfort during those exhausting days.

The 35th week of pregnancy is a time of great anticipation as the baby is on its way out. During this time, the mother-to-be is often vulnerable and the support of friends and family is crucial. As labour may begin at any moment, one needs to keep a watchful eye on the signs of labour such as the bloody show.

Previous article « 34 Weeks Pregnant: What To Expect
Next article Uterine Fibroids During Pregnancy »