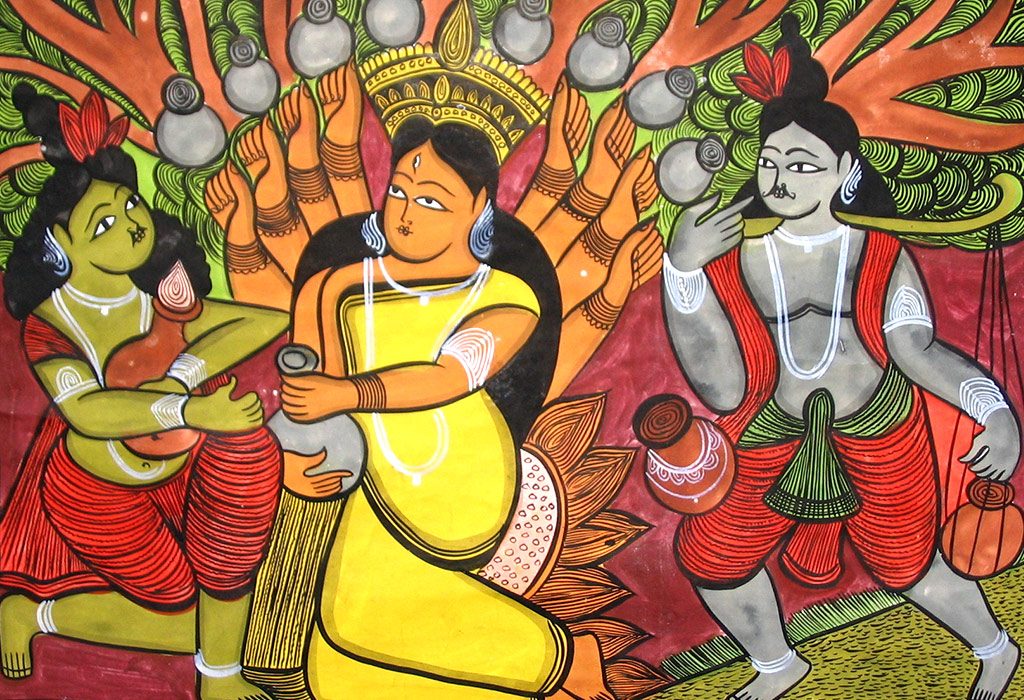 Every culture has its own mythology – a set of stories that involve heroic characters, mythical beasts, gods, advanced technology, and fantastic locations. While their validity is questionable, their existence shows the incredible fascination that we, as humans, have for these stories. Indian mythology contains a vast and ancient array of tales, which are stimulating, entertaining, and have a moral lesson behind them.

What Do Children Learn From Mythology?

Mythology teaches moral values to children in a way that holds their interest. Here are some things that children imbibe from mythology.

Mythology teaches children the difference between good and evil, iterating, each time, the importance of good deeds. It also proves that good always conquers evil.

Mythology is a world of its own, with advanced technology, mystic beings, and breathtaking imagery. This sets the minds of children running, as they imagine each thing they are told about. It also shows them that nothing is impossible, if you have a creative mind.

Children learn the importance and meaning of festivals and customs that are frequently seen in Indian culture. Mythology teaches them why things are the way they are, satisfying their curiosity and engaging their minds.

Respect goes hand in hand with discipline. Mythology teaches kids to respect their elders, teachers, and peers. This leads to better discipline in children.

5. Showcases the Power of Love

Whether it is love for family, teachers, God, Mythology teaches kids that love conquers all, and there’s nothing greater than staying true to the people you love, against all odds.

Best Mythological Stories for Your Children to Read

Introducing your children to mythology will help them learn about their culture, faith, language, and ethical beliefs. You can also create some fond memories with your children by narrating these stories to them, which will not only develop their imaginative skills, but also linguistic abilities and good values. Here is a list of ten Hindu mythological stories for kids that detail the trials and tribulations of 10 different mythological characters and the lessons that can be learnt from them.

1. The Dedication of Ekalavya

Ekalavya was a young boy living with his tribe, deep in the forest. His aim in life was to become the finest archer the world had ever seen. However, when he asked to become Drona’s student, he was refused, due to the low status of his birth. Despite this, Ekalavya created a statue of Drona and practised archery before it, until he became incredibly skilled. However, when Drona encountered him and learned of his accomplishments, he was afraid that a tribal boy would surpass his best student, Arjuna. He demanded that Ekalavya sacrifice his own right thumb as payment for learning under his name. Without questioning Drona, Ekalavya immediately cut off his right thumb and gave it to him, and was, therefore, unable to become the best archer in the world.

Your child will learn about hard work, respect and dedication, especially for teachers and instructors.

2. The Devotion of Surdas

Surdas was one of the greatest devotees of Lord Krishna. He loved Krishna so much that he wrote over a lakh of devotional songs in his honour. Surdas was a blind man, according to the story, who once took away Radha’s anklet when she was following him. When asked to return it, he refused, stating that he could not confirm her identity as he was blind. At this point, Krishna blessed him with sight, after which Surdas begged Krishna to take his sight away again. When asked why, he said that he had seen Krishna, and there was nothing else he wanted to see again.

This story will teach your child to love unconditionally and exhibit devotion towards the things he/she cares about.

3. The Courage of Abhimanyu

Abhimanyu was one of the greatest warriors in the Kurukshetra war. While his mother, Subhadra, was pregnant with him, his father, Arjuna, narrated the Chakravyuha battle formation technique to her. Abhimanyu learnt the entire technique, from the womb, but fell asleep right before Arjuna revealed how to escape the formation. During the war, Abhimanyu was trapped inside the Chakravyuha created by the Kaurava army. Even though he didn’t learn how to escape, he gave up his life fighting for his parents and family.

Abhimanyu’s sacrifice will teach your child about loyalty to family, bravery, dignity, and love.

4. The Integrity of Rama

Everyone knows of the Ramayana, the epic which chronicles the stories of the sixth incarnation of Mahavishnu, Lord Rama. In the Ramayana, Rama is forced to leave his kingdom and go into exile with his brother, Lakshmana, and wife, Sita. Near the end of his exile, Ravana, the king of Lanka, kidnaps his wife and holds her hostage. Facing all terrible odds, Rama manages to fight Ravana and his enormous army, and defeat them, rescuing his wife. The moral of this story is the bond shared between two brothers, and a husband and wife. It will teach your child about friendship, integrity, and love.

5. The Strength of Durga

When the asura-king Mahishasura defeats Indra, the king of the gods, and takes his place in heaven, the great goddess Durga is created from the divine energies of all the gods combined. She then takes on Mahishasura, the Buffalo Demon, and defeats him and his entire army, saving the world.

6. The Faith of Prahlada

Prahlada, the son of the demon Hiranyakashipu, was a great Vishnu devotee. However, his arrogant father hated Vishnu, as he considered himself to be the one true God, due to the boon he had received from Lord Brahma. He tried to have Prahlada killed by many methods, but Prahlada was always saved by Vishnu. After Hiranyakashipu’s last attempt on Prahlada’s life, he got killed by Narasimha, the man-lion incarnation of Vishnu.

This story will teach children about the values of faith, devotion and patience.

7. The Focus of Arjuna

When the Pandavas were young, they trained under Drona, the master of combat. Drona wanted to test his pupils, so he stuck a toy bird in a tree and asked all of them to aim their bows at its eye. When he asked them what they could see, the Pandavas gave different answers, such as the bird, the leaves, the tree, and so on, and missed. Only Arjuna, without missing a beat, said he could see nothing more than the eye of the bird. Pleased, Drona asked Arjuna to shoot. Arjuna’s arrow pierced the bird’s eye, perfectly.

This is a story about focus and determination, which will show your kids that knowing exactly what they want and working towards it will help them achieve their goals.

8. The Strength of Sita

After Rama and Sita returned to Ayodhya, they were crowned king and queen, and began a prosperous rule. However, rumours began to spread about Sita, who had lived with another man, Ravana (even though it was against her will). To control these rumours and ensure the continued faith of his subjects, Rama banished Sita to the forest, where she stayed with Valmiki. Here, she gave birth to twin boys and raised them as a single mother, all by herself.

This story explains how, even in the face of such adversity, women can still be strong, brave, and independent.

9. The Loyalty of Shravana

Shravana was a poor teenage boy. helping his parents on a pilgrimage to all the religious sites in India. As they were old and blind, he was carrying them in two baskets slung over his shoulders. While crossing the forests of Ayodhya, Shravana is hit by a wayward arrow shot by Prince Dasharatha, and dies. Even with his dying breath, he begs Dasharatha to carry water to his thirsty parents.

Shravana is the embodiment of kindness and loyalty. This story will help your children understand the virtues of compassion and taking care of one’s parents.

10. The Patience of Mandodari

Mandodari was the wife of Ravana. While he performed misdeeds and cruelties, she spent her days trying her best to convince him to be just and honourable. She even asked him to free Sita, although her advice fell on deaf ears. Till the end, she stayed loyal to her husband.

This lesson teaches your children to be patient with loved ones, even if they are committing mistakes, without giving up on them. Loving someone means supporting them, even if not supporting their actions.

Indian mythological stories are an intricate tapestry with interwoven threads of politics, morality, philosophy, parenting, love, war and religion. These inspirational stories have inspired many for hundreds of years and will teach your child the many virtues and ethics required to live life as a compassionate and just person. Art is an extremely helpful medium through which a child can understand the world while sharpening her qualities. Encourage this development through engaging craft kits for your kid – this way, she can sharpen her physical and intellectual abilities in a way that is not boring or tiresome.