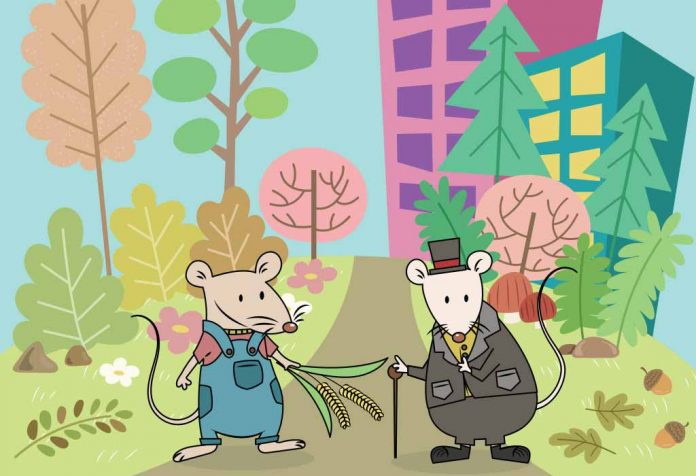 Storytelling has been the way hundreds of generations since the earliest times have communicated deep ideas. Stories contain in them a dense mixture of morals, beliefs and wisdom that unpack itself over time as children grow. This one which is a town mouse and a country mouse Aesop’s fables, is the story of a country mouse that visit’s the big city to experience all of its luxuries and realizes the price at which it comes. The story contains within it the elements of living a simple and content life which is secure in contrast to city life with endless sense pleasures but also grave dangers.

The Town Mouse and The Country Mouse Story for Children

Here is the town mouse and the country mouse story in English for kids:

A town and a country mouse were cousins. The country mouse was simple and lived inside a cosy log by the side of a sunflower field. Life is simple in the countryside and the mouse got by on a few sunflower seeds and wheat stalks most of the days. Some days would be a treat as he would get bread crumbs and cheese leftover after the farmer’s meal. A fresh bubbling stream next to the log had all the clean water he needed whenever he got thirsty. The town mouse would occasionally visit his country cousin for a breath of fresh air and an escape from the hustle and bustle of the mechanized world. Being accustomed to lavish varieties of food in the city, the simple country experience was a chance for him to unwind and go back to town hungry for more.

Since the country mouse had never visited the big town, his cousin suggested that he come stay with him and experience the town all for himself and not just listen to his adventures and stories. The town mouse happily accepted his cousin’s offer, as, after all, he always spoke about how much better life in the big town was compared to the country. Although the country was a peaceful place to live, he wouldn’t give up the pleasures of his town to settle for a laid back life with little to do. He often remarked that he couldn’t grasp why any mouse would want to live in the countryside with so little and barely getting by. They set off at once for the town.

Upon arrival, the country mouse was astonished at the size of his cousin’s house; a four-storied building with cast-iron railings, white stucco pillars and massive doors leading to endlessly long hallways. The brightly polished furniture and oak floors sparkled with the reflection of the ceiling’s crystal chandeliers. After a tour of his upscale mansion, it was finally time for the country mouse to try out the delicious spread of food his cousin always gloated about. The gorgonzola cheese, cream and cakes, truffles, tender meat and champagne were something the country mouse had only imagined.

The dining room was massive, to say the least. The country mouse gasped at the sight of the assortment of food left behind on the table. The humans were just done with their dinner and there was so much to eat for the mice; cookies, jellies, meat-cuts, fresh bread, and ice-cream. They jumped in and buried themselves in the rich food. The country mouse stuffed his mouth with the delicious cakes, drank the sweet champagne and staggered around dizzy. He was having the time of his life with a full belly and having forgotten what it’s like to have little most days or starve sometimes. The world couldn’t be a happier place!

Suddenly there’s a commotion at the other end of the dining hall and the country mouse sees his cousin dash across the table like his life depended on it and dragged him away. He turns around and to his horror sees the biggest furriest cat he has ever laid eyes on in his life in pursuit. The overfed cat is also clumsy and fails to catch them at every corner and turn. At the same time, a maid steps in with a long broom and beats the floor determined to squash them with it barely missing the mice. Finally, they reach their hole in the skirting board at the end of the hall barely missing getting clawed by the most vicious beast that is every mouse’s nightmare. 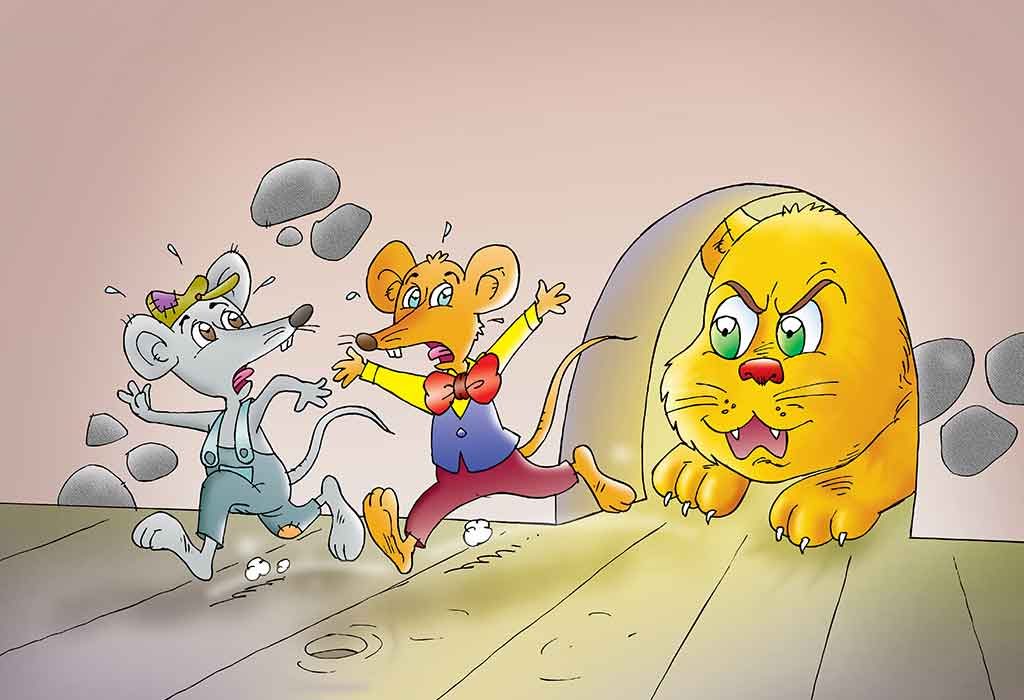 “HAHA! That was close! But wasn’t it worth it??” Exclaims the town mouse in glee. The country mouse is dizzy, but this time out of fear as he almost got squashed and clawed to death. This isn’t something a simple country mouse can live with every day he thinks to himself and leaves the town having bid farewell to his cousin.

Moral of The Story

The town mouse and the country mouse moral lesson is that it is better to live a peaceful life that has little and is secure than to live in a luxury that can end any moment in disaster. Although the town mouse had an abundant variety of delicious food, he had to always live in the fear that it would all go away. The country mouse had little but a reliable source of sustenance that wasn’t out to get him every single day.

A town mouse and a country mouse short story for children teaches them the importance of a quiet life that is peaceful and secure and how a life of impulsive pleasure is fraught with danger.

Health Is the Only Wealth!

My Mixed Feelings About My Second Pregnancy and Delivery