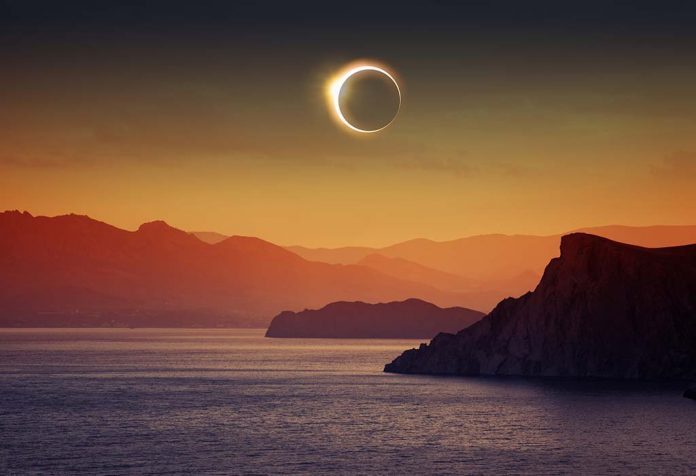 Solar eclipses have been associated with fear and fascination for the longest time now. There are some reasons why it is believed to be connected with good and bad things, but most of those are not relevant to the present time. So, what is an eclipse? It is a natural phenomenon or natural occurrence when three celestial bodies are aligned in a straight line, such that the celestial body in the middle casts a shadow on either of the bodies. But, that’s not all, there is a little more to this fascinating occurrence because of the varied sizes, and the orbits of the celestial bodies. Continue reading to know more about solar eclipses, including interesting facts for kids.

What Is a Solar Eclipse? 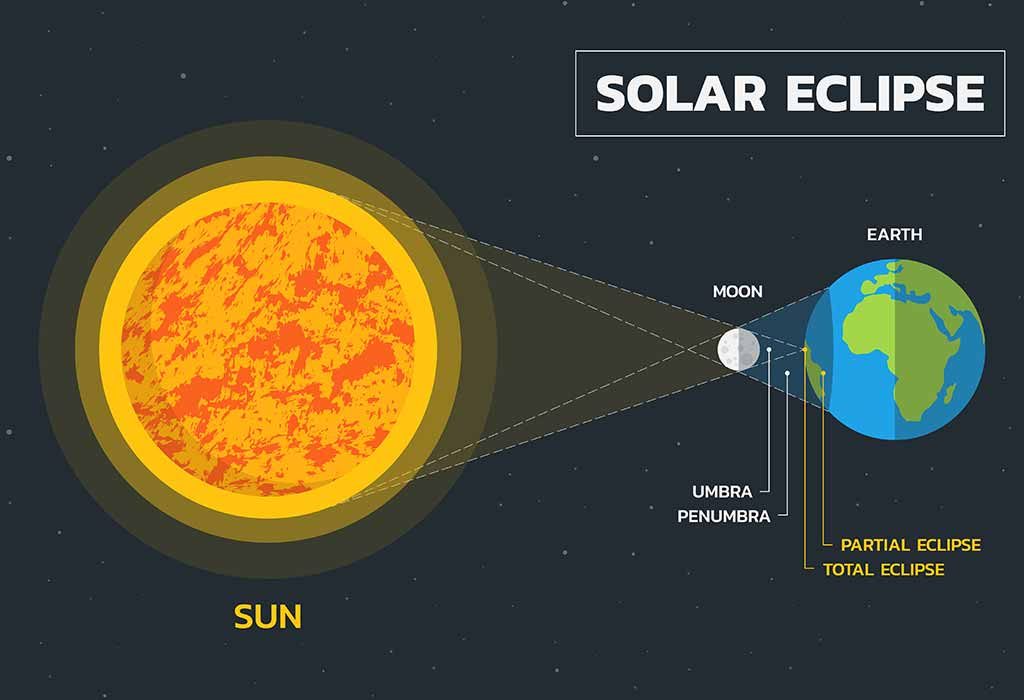 For the observers on the ground, the moon and the sun should be in more or less the same place in the sky during the day. As the eclipse progresses, the moon passes between the sun and the earth casting a shadow on the ground. Depending on how much of the sun is covered by the moon, we could experience a partial, total, or annular solar eclipse.

Since the positioning of the astronomical bodies matters, solar eclipses do not occur as frequently. Because the orbital planes of earth and moon are tilted, we can only see up to 5 eclipses per year on different parts of the globe.

Eclipses also occur in seasons and cycles. A typical ‘season’ is a 35 day period when we can expect two or even three eclipses to occur and repeat after 6 months. This is why there is always a solar eclipse two weeks before or two weeks after a lunar eclipse. Eclipse cycles are a bunch of repeated eclipses separated by intervals of time.

A common question most parents get asked if all solar eclipses are the same. If your little one happens to ask you the question, you will would the information below quite helpful.

What Are the Types of Solar Eclipse?

Depending on the position of the sun, moon, and the earth, there are four types of solar eclipses that occur. 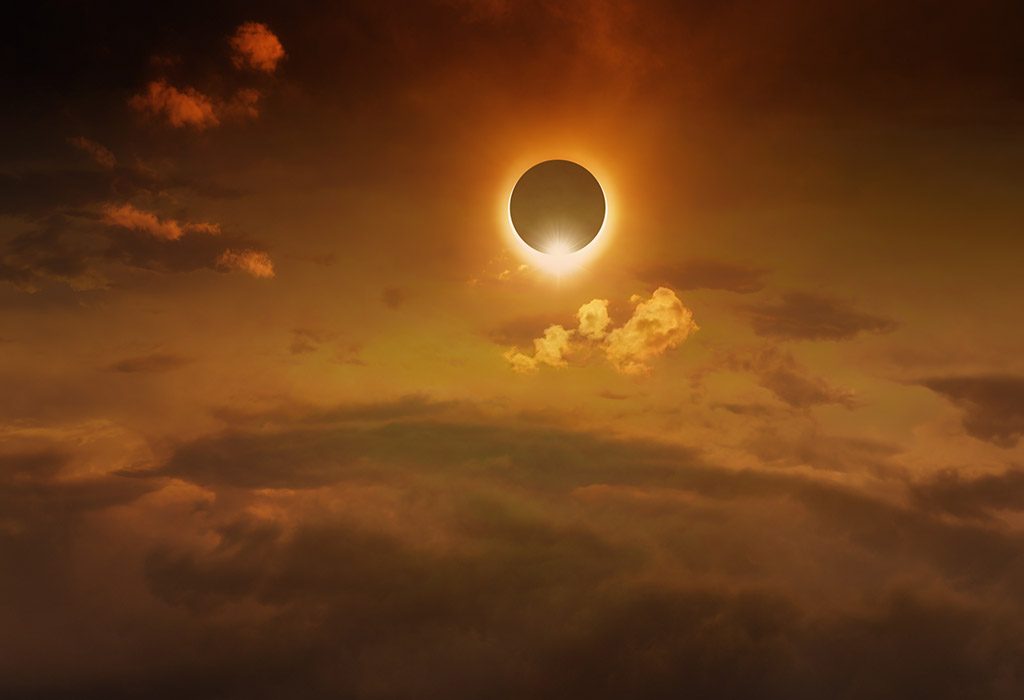 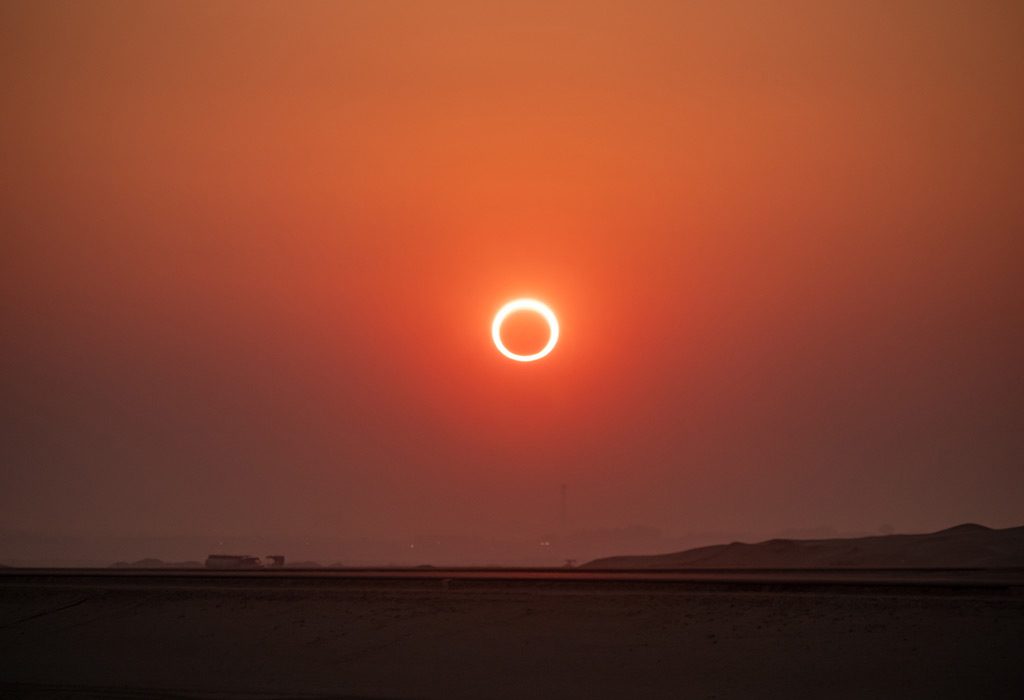 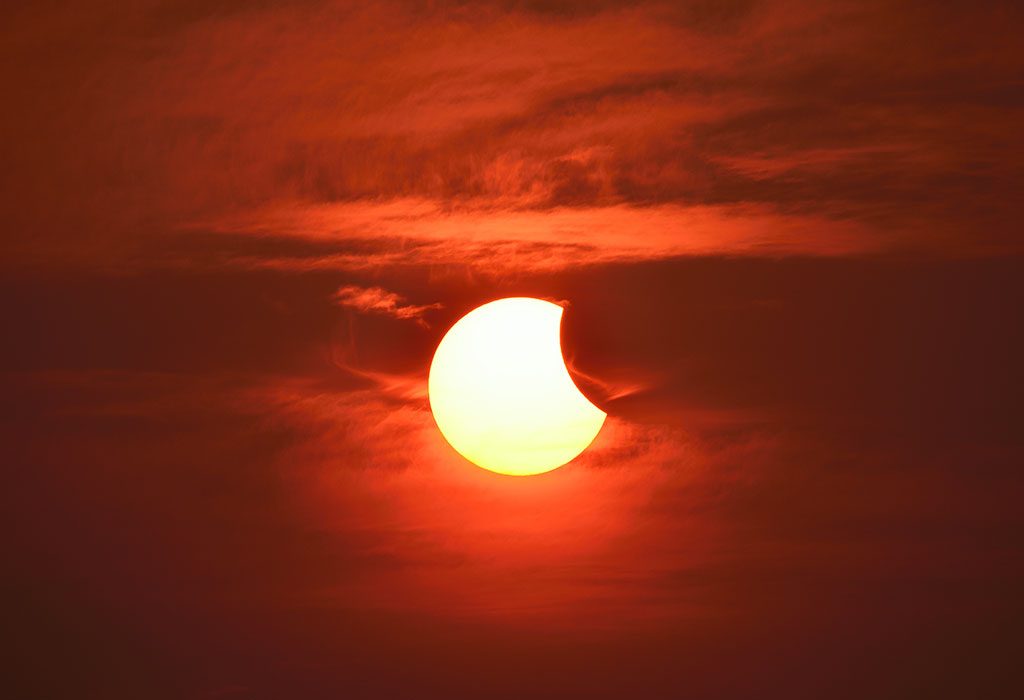 As mentioned earlier, the sun the moon and the earth need to be alignment, with the moon in the middle. The alignment also depends on the size of the sun and moon, and the distances between them when they align in their orbits. Interestingly, the sun and the moon seem almost the same size because although the sun is 400 times bigger than the moon, it is also 400 times further away. Therefore, when you superimpose one on top of another, the moon covers the sun perfectly.

The reason why there isn’t a total solar eclipse every time is that the apparent size of the sun and the moon vary in the sky. As the earth goes around the sun in an elliptical orbit, the sun is 3 per cent bigger at its closest (perihelion) than it is at the furthest point (aphelion). The same effect is seen with the moon. When it is closer to earth (perigee) it looks 14% bigger than when it is at the furthest (apogee). Therefore, when the moon is at perigee, it can easily cover the entire disc of the sun resulting in a total solar eclipse. When the eclipse occurs with the moon is in apogee, it won’t be able to cover the sun’s entire disc resulting in an annular eclipse.

To understand what happens during a partial solar eclipse, it’s essential to understand the moon’s shadow. The shadow can be divided into three parts; The umbral region, the penumbral region and the antumbra. The umbra is the darkest part of the shadow, and an observer viewing from this region sees a total solar eclipse. Any observer who stands in the penumbral region of the shadow will see a partial eclipse where the sun isn’t fully covered. The antumbra is the shadow under which observers see an annular eclipse.

There are two solar eclipses in 2020:

This natural phenomenon is tempting, no doubt, but it cannot be witnessed as one would witness a lunar eclipse. Read on to know how you and your little one can witness a solar eclipse.

How to Watch a Solar Eclipse?

Watching a solar eclipse can be a highly rewarding experience depending on the methods used and the safety precautions taken. Before getting into the dos, the don’ts must first be laid out:

These are the best option you have if you wish to look at the sun directly and comfortably. Eclipse glasses use special filter material that is safe for viewing the sun without straining the eyes. They are available inexpensively at hobby stores, museums, or online.

Welder’s glass comes close to what is ‘acceptable’ for short periods of viewing the sun. Make sure you purchase #14 or darker to ensure most of the sun’s rays are blocked out. Hold the glass in front of your eyes and look through for a few seconds and look away to give your eyes a break. Do not use welder’s glass with optical instruments.

The most popular solar filters with enthusiasts are the Baader filter, aluminised polyester, and metal-coated glass. The first two are available online as sheets and are perfect for making custom filters for optical instruments. They can also be used to make custom eclipse glasses.

A pinhole camera is a clever contraption most children would have built as a school project. They are also excellent for projecting solar eclipses. A pinhole punched into an index card can neatly project an image of the sun three or four feet behind the card. A long carton box can be turned into a pinhole camera to make a brighter projection for a small crowd to see.

If you are unsure about the best way to go about viewing the eclipse, you can always head to a local astronomy club or planetarium. Watching with other amateur astronomers and sky gazers will not only give you an opportunity to get the best views of the eclipse but also learn a great deal about it.

If your location is cloudy or you are unable to view the eclipse directly, you can always tune into popular channels that broadcast the eclipse live.

Here are some solar eclipse fun facts for kids:

A solar eclipse is a celestial phenomenon which occurs as a consequence of the moon passing in between the sun and the earth, casting a shadow on the earth. They can be predicted years in advance and viewed by all with proper equipment and safety guidelines.

Foetal Pole- What If It is Missing on an Ultrasound

Toddler Tantrums Are Real, But You Are Stronger Than You Think!