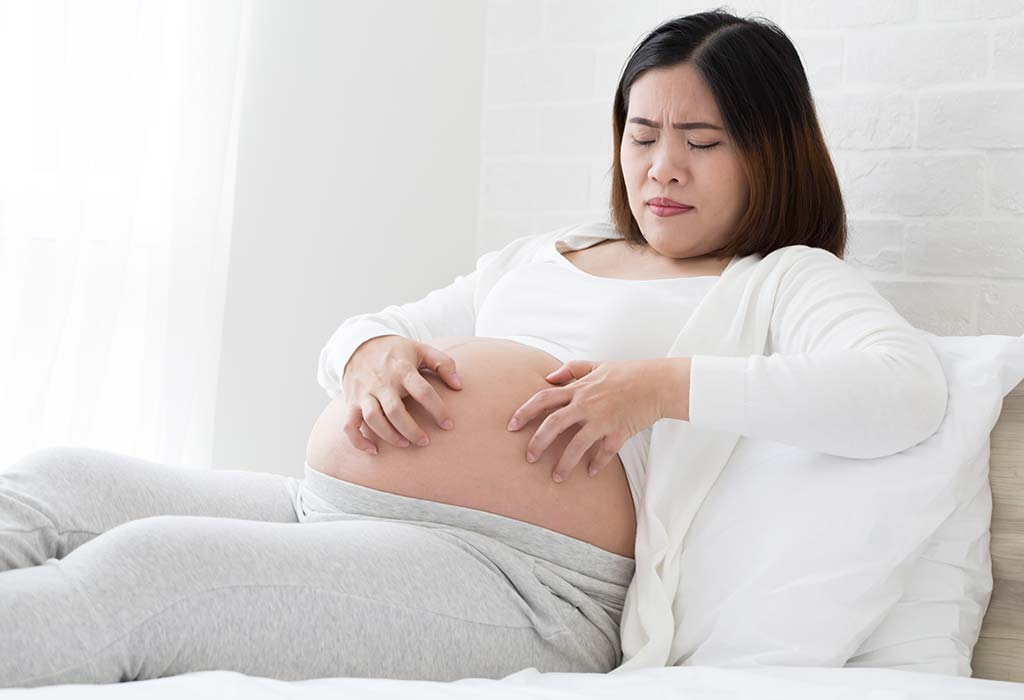 Pruritic Urticarial Papules and Plaques of Pregnancy (PUPPP) rash, or in layman terms, the polymorphic eruption of pregnancy (PEP), is often triggered by the stretching of the skin. Statistics show that about 1 in every 150 pregnancies experience the outburst of these rashes during the third half of the pregnancy period.

Let’s get to know more about the toxic erythema of pregnancy, including the causes, symptoms, and treatment.

What Is PUPPP Rash?

PUPPP rash appears during late pregnancy. The breakout of rashes exhibit themselves on the abdominal region and often extend to the thigh and buttocks. Although the rashes are not dangerous, they can cause severe discomfort to the mother. This polymorphic outburst of pregnancy is normally documented in the latter stages of the pregnancy, at around 35 weeks.

The other names for the PUPPP rash include:

The eruption of the rashes almost always embarks from the abdominal stretch marks. The rashes consist of tiny red bumps, similar to pimples, that eventually form clusters and spread to several body parts except for the face.

Who Is At Risk and How Common Is It?

Although most mothers would not experience this outbreak of rashes, a few are most likely prone to it. Some risk factors that you need to look out for in PUPPP rash:

What Causes PUPPP Rash in Pregnancy?

The cause behind the spread of the PUPPP in mothers is still unknown in medical research. However, they do have a few theories to support their reasoning.

Signs and Symptoms of PUPPP Rash 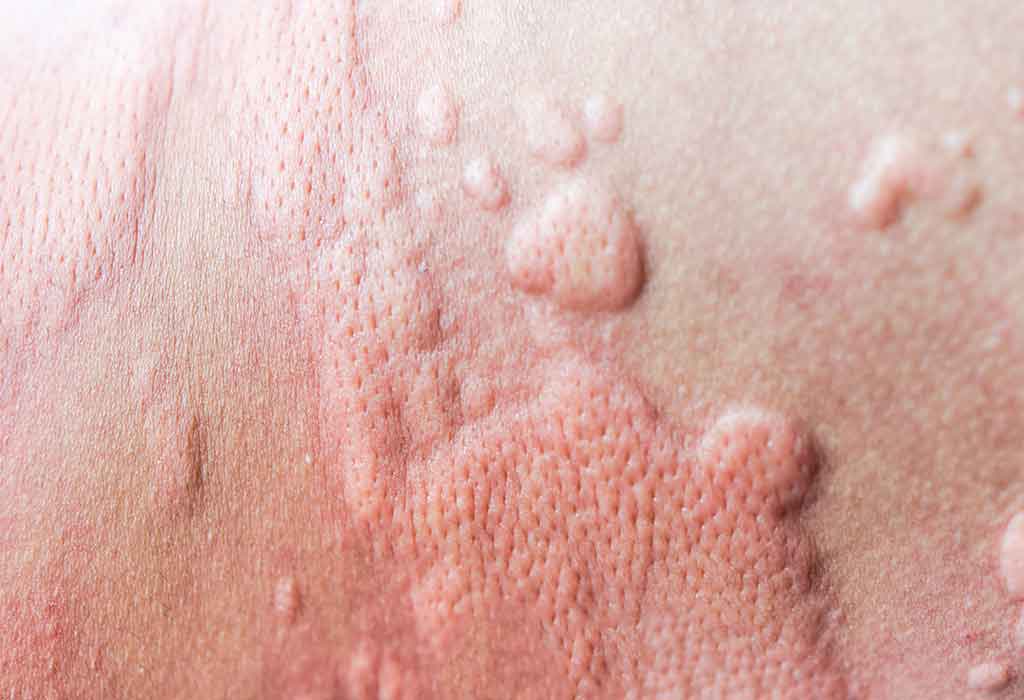 The Pruritic Urticarial Papules and Plaques of Pregnancy customarily begin from the stretch marks in the abdomen area, showing appearances of tiny red pimple clusters that look like hives. Gradually, these hives join together to form an expansive, raised region called Plaques. These blisters may now spread prominently towards your buttocks, thigh, and back areas and seldom appear on the arms and legs and even on above the breasts.

The plaques tend to be quite itchy at night, causing you extreme discomfort and, in worst-case scenarios, loss of sleep. However, these blisters do not last for long (mostly for a week or so) and, more or less, disappear after the birthing period. The usual span of these rashes ranges from four to six weeks absolute of when you deliver. While itching is common in pregnancy, certain cases and instances of severe itching during pregnancy can also be a sign that your body is in duress and requires care and medical attention.

In such severe cases of itching, itchiness around your abdominal area can result from PUPPP. However, it is probably due to your clothing if you experience itchiness in your arms and leg region. It is also recommended that you wear soft fabric material while being pregnant so that you do not face any discomfort.

Diagnosis of PUPPP Rash in Pregnancy

Your healthcare professional might also advise you to examine for infections like fungal infections or scabies or, in extreme cases, Pemphigoid gestationis (PG). PG is a form of an autoimmune rash that normally occurs during the second and third trimesters and is more serious than the PUPPP rash. Typically, depending on the appearance of the rash, your medical consultant will make a clinical diagnosis upon which, in most cases, no further testing is required.

Your healthcare professional might suggest taking a few blood tests to rule out several other infections, inclusive of:

In any case, consult a doctor as similar symptoms exist for Atopic Dermatitis and Contact or Irritant Dermatitis. For instance, Cholestasis of Pregnancy, a liver condition that ensues during the latter part of the pregnancy, can cause extreme itching. If you are diagnosed with Intrahepatic Cholestasis of Pregnancy (ICP), the symptoms may include yellow eyes and itchy hands and feet and pose a dangerous environment for the fetus.

Treatment for PUPPP Rash in Pregnancy

Normally the treatment for PUPPP relief concentrates on condensing the itchiness and alleviating the rash. Under the guidance of your healthcare consultant, you may find that these are some of the common treatments:

Antihistamines are normally taken to cure several allergic reactions and can be taken orally or as an injection. These medications hinder the receptor for histamine, reducing the severity of the symptoms like itchiness, sneezing, and swollen throat. Antihistamines are also effective for other conditions like the common cold and insect bites, although not as much as they are for PUPPP hives and hay fever.

Oral steroids may cause more harm than help if not taken under the doctor’s advice, especially during your pregnancy period.

Topical Corticosteroids have proven their worth in treating Atopic Dermatitis, Psoriasis, and Contact Dermatitis. Although these steroids are quite effective in treating inflammatory skin conditions, you must also realize several side effects. Upon applying these steroid ointments and creams in thin layers, make sure that you massage them at least four times a day to get better results. But again, if you are a chronic skin patient or heavily pregnant, it is best to consult your healthcare professional before any other advancements.

If you are experiencing an extreme case of PUPPP, you will have to confer with your medical expert, who can diagnose you further and give you an alternate medication.

How to Treat PUPPP Rash Naturally?

If you cannot afford to consult a healthcare professional or if the early stage of PUPPP rash on the belly is spreading by large, here are some natural remedies that you can try to help reduce the itchy factor. Oatmeal baths, Aloe Vera gel. Moisturizers, Coconut oil, Calamine lotion, Wet compress, Baking Soda paste, bathing in lukewarm water are some things that you can try out when you need some relief from all that intense scratching session.

A bath in oatmeal or baking soda can prove fruitful if the person is experiencing a severe itching condition. Oatmeal is majorly known for its anti-inflammatory properties, thereby reducing the swelling on your skin and leaving it cool and smooth. For a successful remedy, try making your oatmeal bath. All you have to do is buy the regular oats and mix them in a blender or a grinder until it becomes a fine powder. Once that is ready, you have to mix a few cups of oatmeal into your bathtub till it colors itself off-white or hues of the milk. Soak yourself in the bathtub till you feel the itchiness reduce.

Moisturizers are great even when your skin does not itch. However, being pregnant can leave your skin quite dehydrated a lot of the time. It’s best that you start applying moisturizers or similar products that help your skin feel smooth and hydrated once you know you will become a mother or during an early stage PUPPP rash so that it’s easier to treat your skin later on. Moisturizers are amazing, especially to deal with the changes that are happening or going to happen in your body, like fatigue, backaches, and morning sickness. They also keep a consistent check on your skin’s moisture balance, alerting you when it’s dry and cracked. If you are running low on moisturizers, you can always turn to your ever faithful coconut oil in the kitchen. Coconut oil has antibacterial properties that can reduce your skin irritation, leaving it smooth and hydrated.

Aloe Vera can be found everywhere, even in your garden. Pluck an aloe vera leaf, skin its outer prickly layer, and use the inner gel to massage on your affected or inflamed region. Aloe Vera has been used by generations of people and cultures for its hydrating and moisturizing components. This plant is quite benign as it relieves minor injuries, cuts, scrapes, and whatnot. You can also apply Aloe Vera gel on your baby’s skin because of its medicinal properties and its ability to heal insect bites on the little one.

It can be quite hard not to scratch when it has become so itchy, but doing so will worsen your condition. Using a cool, wet compress on the affected and inflamed region can help in reducing the itchiness. A cold compress can mean anything, from a wet towel to an ice pack wrapped in cloth. Leave it on your itchy area for around 5-6 minutes to get the full benefit. Always make sure that you consult with your doctor regarding the pan of the itching and the different treatments you have been taking so that the doctor will know how to diagnose you properly.

Stretch marks, along with rashes, can be a downer. But do not worry; if you have persisted in consulting a doctor or at least tried out these remedial treatments, it’s sure to ease your itchiness and bring your spirits back.

1. Is PUPPP Dangerous and Can It Affect Your Baby?

No, PUPPP has proven to be not dangerous upon medical consultation for the mother and the child. Although your child might probably have a milder version of the outburst of the rash, it still would not put you or your child in any complications. Putting up with the urge to scratch the inflammatory rash is the only difficult factor as it can obstruct your sleeping hours.

2. How Long Does PUPPP Last and Can It Reoccur?

The Pruritic Urticarial Papules and Plaques of Pregnancy (PUPPP) normally span over 3-4 weeks, depending on the child’s birth. It would last only for a week in some cases, but mostly once the delivery is over, the rashes tend to disappear. While in most cases, the rashes do not resurface after the first pregnancy, there are exceptions of milder PUPPP rash if you become pregnant for the second time. The results vary for each individual.

Previous article « When and How to Stop Co-sleeping With Your Child?
Next article Dior Name Meaning and Origin »