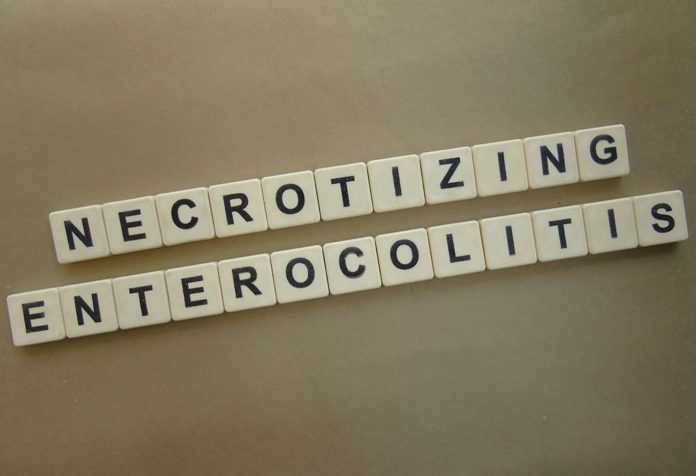 Necrotizing Enterocolitis (NEC) is a gastrointestinal disease that commonly affects premature infants. The disease involves infection and inflammation of the intestine caused by the death of cells that line the inside of the intestines. The condition can become serious as the bacteria infecting the intestine can lead to the perforation of the intestine. This can result in spillage of the contents into the abdominal cavity leading to further potentially fatal infection. The NEC disease in newborns is a serious condition and can turn into a medical emergency.

What Is Necrotizing Enterocolitis (NEC) in Newborns?

Necrotizing Enterocolitis (NEC) is a condition that develops when the internal lining of the intestines becomes damaged and starts to die. The bacteria in the intestine infect the tissues, leading to inflammation. Typically, only the intestine’s inner lining is affected by the condition; but the whole intestine can become infected as it progresses.

In severe NEC conditions, the infant’s intestine might get perforated. The intestine’s contents, such as feces and bacteria, can leak into the abdominal cavity through this hole and cause further infection, leading to a medical emergency.

NEC can affect any newborn infant within 2 weeks of birth, and it is more common in formula-fed babies than breastfed babies. However, close to 90 percent of the cases are seen in premature infants. NEC is a serious condition and can turn for the worse quite quickly. It is important to seek treatment as soon as the infant starts showing symptoms.

Necrotizing Enterocolitis is classified based on the condition’s cause and occurrence of symptoms. Here are the different types of NEC:

The classic NEC is the most common form of this condition, affecting premature infants born before 28 weeks of pregnancy. The condition usually starts three to six weeks after the infant is born. This condition appears suddenly even though the infant keeps well after birth.

In rare conditions, infants who are yet to be fed develop the condition within the first week of delivery.

Full-term babies affected by NEC typically have birth defects such as a congenital heart condition, low oxygen levels at birth, or gastroschisis (intestine developing outside the body).

In rare situations, NEC outbreaks can happen in hospitals in Neonatal Intensive Care Units (NICUs). Premature babies are kept in NICU for advanced care and if they are critically ill. Bacteria such as e.Coli can infect several infants during an outbreak.

How Common Is Necrotizing Enterocolitis in Babies?

NEC is most common in premature babies as it affects about 1 in 1000 premature infants. The highest risk is for infants that weigh less than 2 pounds. In full-term infants, the condition is quite rare and affects only about 1 in 10,000 newborns.

Who Are Commonly at Risk of NEC?

Several factors increase the risk of NEC in some newborns. The newborns more at risk are:

Premature babies who are born before 34 weeks of pregnancy have the highest risk of NEC. The risk is even higher in the preterm babies who are born before 32 weeks. Since preemies have trouble with blood circulation and movement of oxygen throughout the body, their intestines are seldom ready for digestion and fighting infections. These factors increase the chances of NEC.

Although premature babies are at a higher risk of NEC, formula-fed babies are more likely to get the disease than breastfed babies. Since breast milk is easier to digest and contains substances that fight off infections, it helps keep NEC under check. Breastmilk also stimulates the intestinal cells to mature.

Infants who had low oxygen at birth or experienced a difficult birth are at a higher risk of NEC. When the oxygen level drops, the body directs more blood towards the vital organs such as the brain and heart. It reduces the flow to the intestines, leading to a lesser oxygen supply to the intestinal tissues.

Infants who contract an infection in the intestine after birth are more likely to develop NEC.

There are several known contributing factors to NEC, though the primary cause of NEC is not yet known. Premature infants have a weakened immune system which is one of the key factors to developing NEC. Immunity is necessary to fight infections; weak infants are more susceptible to the attack of microbes outside the mother’s womb.

It has also been observed that a lack of oxygen during a difficult delivery is a contributing factor. Reduced oxygen and blood supply to the intestines tend to weaken the newborn’s intestine. Thus, it becomes easier for microbes to enter the intestine through food and start damaging it. Since premature infants do not have fully developed organ systems, they would have difficulty digestion, blood circulation, and, subsequently, fighting infections.

Here are some of the necrotizing enterocolitis signs: 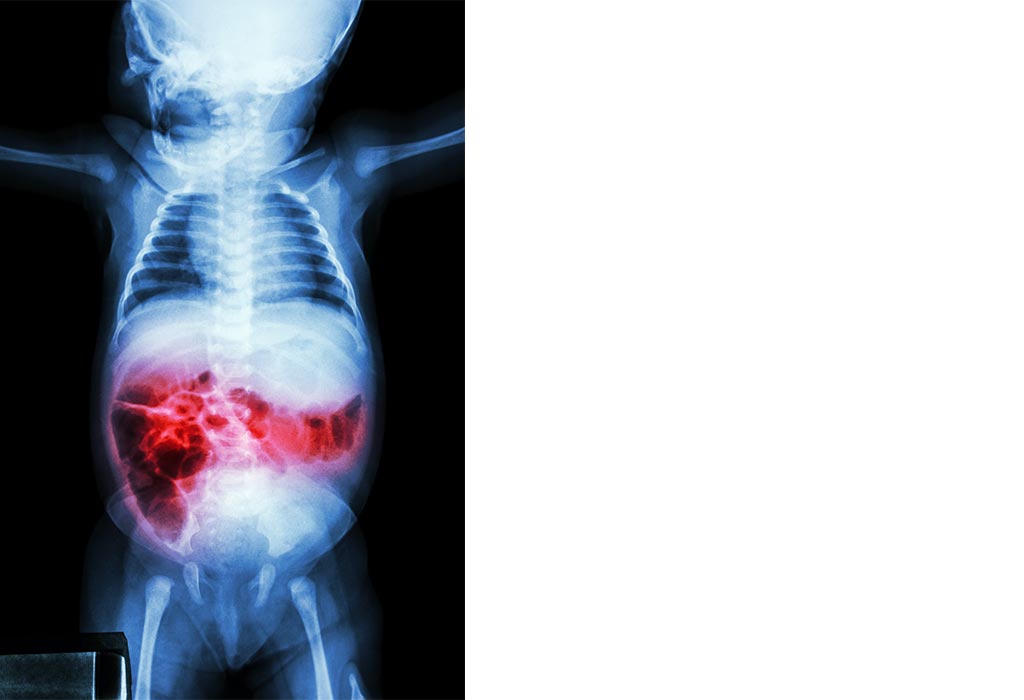 The diagnosis begins with a physical examination of the abdomen by the doctor. During the exam, they will gently touch the infant’s abdomen to check for tenderness and swelling. An X-ray will help obtain detailed images of the intestine to see signs of inflammation and tissue damage if swelling is identified. A stool test, called a Guaiac test, will also be done to check for blood in the stool, which indicates internal inflammation and bleeding.

NEC is followed by a range of complications, some of which stay for a lifetime:

In severe cases of NEC where the intestine is perforated with fluids leaking into the abdominal cavity, there is a high risk of bacterial infection to other organs. The resulting infection called peritonitis can increase the risk of a potentially fatal blood infection called sepsis.

Intestinal stricture is a complication that is seen in one in three infants with NEC. The stricture makes the intestine passages narrow and is a condition that develops a few months after the infant recovers from NEC. Food cannot pass freely in narrow intestines, and some babies need surgery to open it up.

Sometimes severe NEC can destroy a segment of the small intestine and lead to short bowel (short gut) syndrome. Since the absorption surface area is greatly reduced, it becomes hard for the body to absorb nutrients and fluids. Children with this condition would need life-long care to meet their bodies’ nutritional demands; some might even need to be tube-fed.

Many children with the condition will have more time to reach developmental milestones and have poor neurodevelopmental outcomes. This is especially the case with children who undergo surgery. They will have to be carefully monitored for growth and development.

The NEC newborn treatment depends on various factors such as the severity of the disease, the overall health of the infant, and their age as they grow. Since the intestines need time to rest and heal, mothers are asked to stop breastfeeding or tube feeding. Instead, the baby receives fluids and nutrients through intravenous (IV) drips.

If the infant has difficulty breathing because of the swelling in the abdomen, they receive breathing assistance and extra oxygen. A nasogastric tube would also be inserted into the stomach to suck out any gasses or fluids. Antibiotics would also be administered in the case of infections by Necrotizing Enterocolitis bacteria.

In about 1 in 4 infants, NEC surgery might be needed to remove dead intestinal tissue and close up the perforation. In some infants, an ostomy procedure might also be performed to redirect stool by connecting the large intestine to the stoma and capturing the excrement in a bag outside the body. The bag will be removed once the baby has recovered and the intestines are reattached.

If the preemie is too young for surgery, weighs less than 1 pound, or is too sick, then a catheter will be placed in the abdomen to drain the fluids in the abdomen. Draining the fluids lessens the chances of infection and removes the gas. The procedure to close the perforation can be performed when the infant is a little older.

How to Prevent Necrotizing Enterocolitis?

Since the condition affects mostly premature babies, pregnant women with a high risk of preterm birth are given corticosteroid injection. The steroids help boost the fetus’s health and lessen their chances of having lung or intestinal problems.

Feeding breast milk to preterm infants is known to reduce the risk of NEC. Probiotics are also mixed with breastmilk or formula when the preemies are tube-fed.

NEC can become a serious and life-threatening condition without timely care. Most babies with the condition make a full recovery after treatment. In rare cases where the bowel is removed due to damage, babies experience malabsorption and life-long complications. However, the prognosis looks good with timely intervention and good care for most preterm infants diagnosed with the condition.

1. Why Do Premature Babies Have a Higher Risk of Developing NEC?

Premature babies have a weak immune system. Their organs are not fully developed to fight off infections and recover as well as full-term babies. A low supply of oxygen to the intestine because of difficult birth can also weaken the intestine making it more susceptible to tissue damage and infections.

2. What Are the Treatment Complications?

About 8 in 10 babies with NEC survive but have long-term health problems. Surgical intervention can also lead to problems, such as short bowel syndrome, where the intestine is not long enough to absorb nutrients normally. Such children need to be fed the right amount of nutrients and need life-long care.

6 Ways To Look Slim In a Saree Post-Pregnancy, WITHOUT Actually Losing Weight!

10 Effective Home Remedies for Whitening Your Teeth at Home

Inspiring ‘Let Go and Move On’ Quotes and Sayings