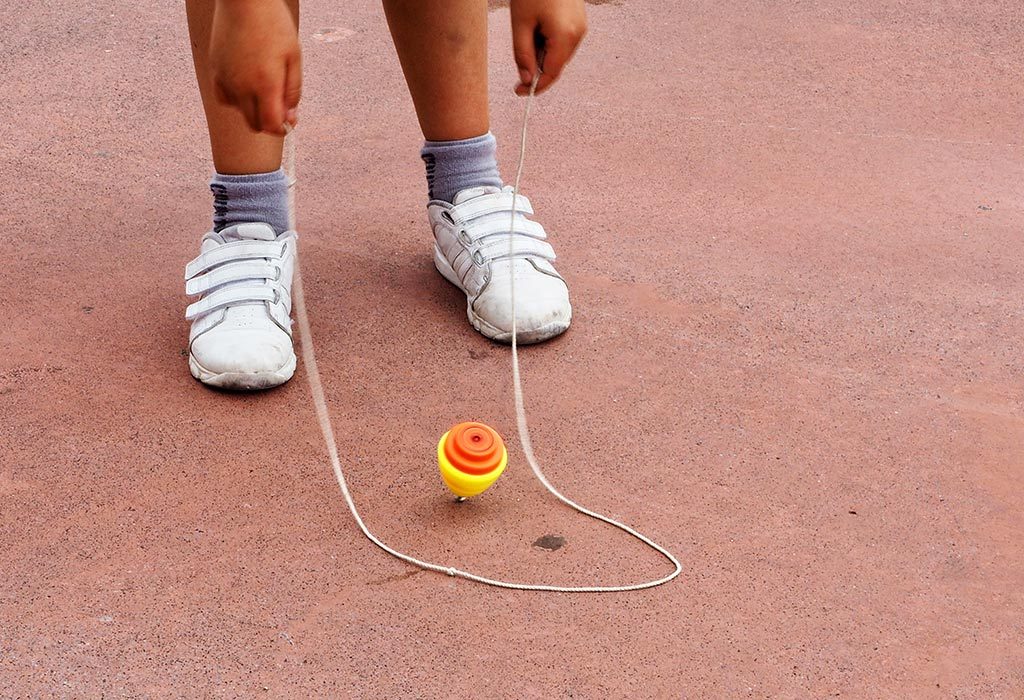 Sports and games have always been an integral part of India’s rich culture and history. Sadly, today’s kids are so engrossed in playing video games that traditional games like Pallanguzi, Lippa, Kabaddi, Gilli-danda have been completely forgotten. Gone are the days when kids simply couldn’t wait to go out and play a few rounds of Pithoo or Kith-Kith (Hopscotch) with their friends. The reduction in physical activity has given rise to a host of health issues in kids. Therefore, reviving traditional games will provide a host of health benefits.

Some of the Indian traditional Indoor games are:

Pachisi, a board game, was quite popular in ancient India. The game finds its mention in the Mahabharata. Akbar and his descendants also played this game. It involves two to four players who strategise their pawn’s moves on a piece of cloth designed in the shape of a symmetrical cross to win the game.

Chaupar is also a board game which was invented around the 4th century. It includes two to four players who use cowry shells and wooden pawns to plan their manoeuvres and win the game. The contemporary version of Pachisi/Chaupar is Ludo which you might have played in your childhood. 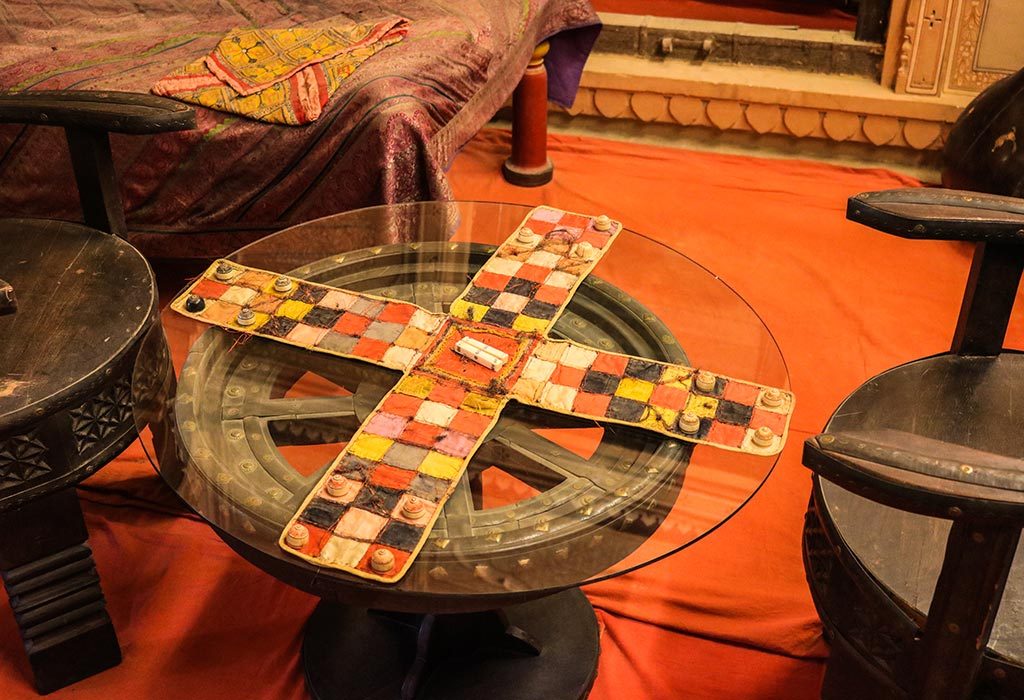 It is one of the famous games which was played in ancient South India. Pallankuzhi is believed to have originated in Tamil Nadu and later spread to other places like Andhra Pradesh, Karnataka, Kerala, and even Malaysia and Sri Lanka. Variations of the game are called Kuzhipara in Malayalam, Ali Guli Mane in Kannada and Vamana Guntalu in Telugu. The game includes a rectangular board, divided into two horizontal rows and seven vertical columns. Thus, there are 14 cups on the board and 146 counters. Usually, cowry shells or tamarind seeds function as counters. Two people can play this game at a time.

Gutte is a fun game can be played by both adults and kids. It generally requires five pebbles or small stones. There is no limit on the number of players who can play this game at a given time. The player needs to spin a stone up in the air and gather the remaining stones lying on the floor with one hand without allowing the one in the air to fall to the ground. Next, the player has to throw two stones up in the air and collect the rest and so on. The player who finishes eight steps in the minimum number of tries is the winner.

Spinning top or Lattoo is a popular game in Indian villages even today. This simple game has been in existence since 3500 BC. At the beginning, tops were made of clay. Later, wooden tops began to be used. Today, coloured and designer tops are also available. There is a string which helps to spin the top and also to lift up the spinning Lattoo. Two or more players can play this game. All the players wrap their tops with the string and then unwind it by pulling the string, making the top rotate on the ground. The players need to pick the top with the string as fast as they can. The player whose top spins the longest is declared the winner. 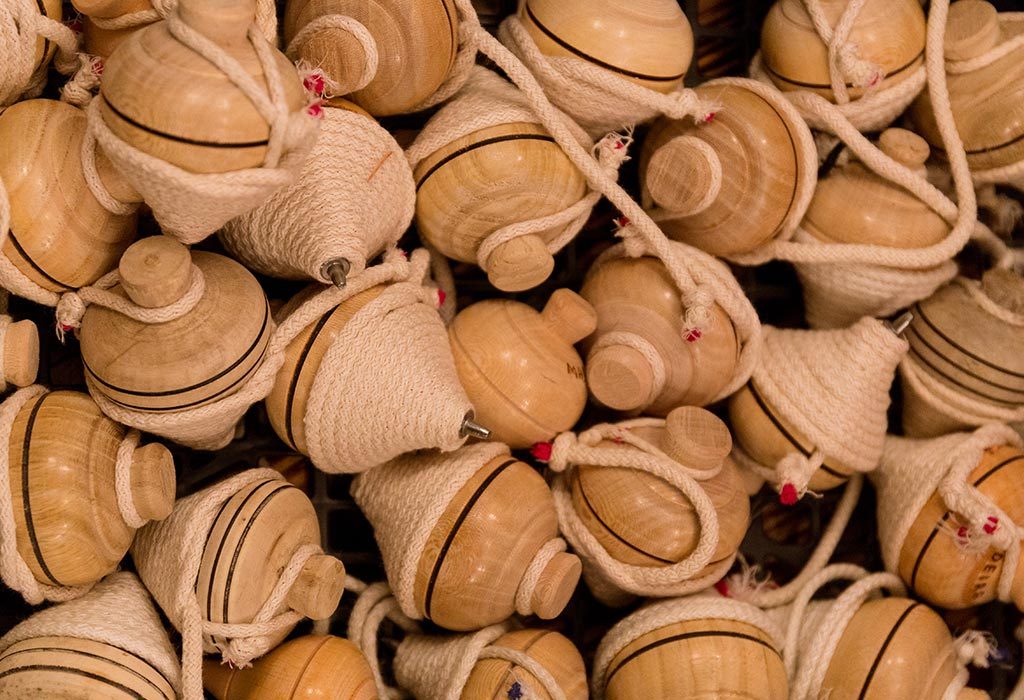 Antakshari is an entertaining Indian desi game is often played by grown-ups and children alike. It originated in Indian and is now played worldwide with alterations. Variations can be made to the original idea to suit the occasion such as family gathering, weddings, parties, etc. To play this game, two teams are made. One team sings a song, typically a Bollywood song. The other team has to sing a song beginning with the last consonant of the song sung by the first team. Both the teams keep taking turns until one can’t think of a song and thus loses.

Some Indian traditional outdoor games are:

One of the exciting childhood games played in India was Kancha. Other names of the game include Golli, Marbles, Goti, and Lakhoti. It began during the Harappan age. The game involves the use of round glass marbles or kanchas. Several people can participate in this game. The objective is to collect the maximum number of marbles by striking the chosen kancha with another one. The winner gets to take home all the marbles of the other players.

This hopping game, also called Stapoo, is a popular outdoor game. In Tamil Nadu, it goes by the name Nondi. The game involves drawing a grid on the ground and numbering it. Players take turns and throw an object, usually a small stone, onto the numbered blocks. They have to hop across the blocks to pick up the object jumping on one/two legs to finish the lap, taking care not to step on the border lines. It is a group game. 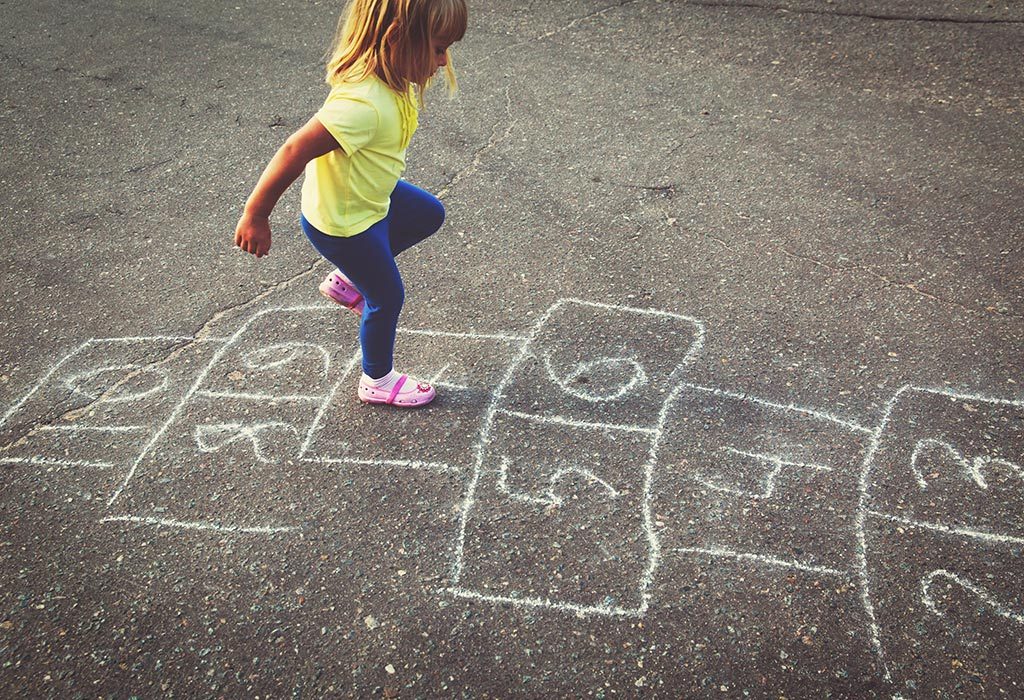 Gilli Danda is an older version of modern-day baseball and cricket. Its fame once matched that of cricket in India. All it requires is two unevenly sized sticks. The smaller stick is called the Gilli and the longer one which is used to strike the Gilli is called the Danda. The objective is to flip the Gilli into the air with the Danda. While the Gilli is in the air, the player must hit it with the Danda as far as possible. The player also needs to run to touch a pre-decided point before the opponent can lay his hands on the Gilli. It can be played by many people at the same time.

Kabbadi is a team sport which requires no equipment, only agility and strength. It originated in India and is now played globally. Kabbadi in Hindi means holding the breath. Players form two teams with 7 to 12 members each. Players of one team have to break-in the opposing team’s area. While doing so, they need to try and touch as many opposing players as they can. The ‘touched’ players are declared out. The team with the least number of players at the end of the game is declared the winner. 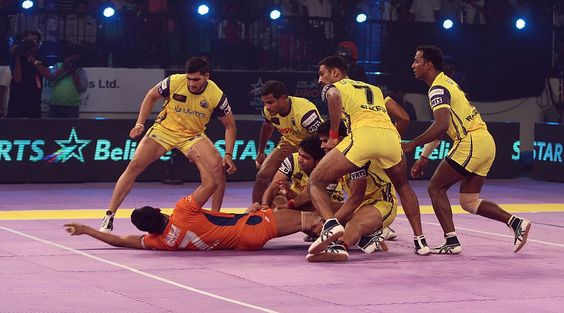 Satoliya/Pithoo/Lagori is basically seven stones. It originated in India and has found its way to other places. It involves a ball and a pile of stones, usually seven. There are two teams of players. One player of the attacking team needs to strike the pile of stone with the ball to knock them over in three shots. Then the whole team has to try and restore the pile before being hit by the ball and declared ‘out’.

Chain is another delightful children’s game. This game is more fun to play when there are more players. The ‘denner’ has to catch the other members. When the denner catches someone, he joins hands with the denner to form a chain. Together they try to catch the other remaining members. Thus, the caught members keep joining to form a chain till all the players have been caught.

Kho Kho is a team game which started in India. It gained popularity in 1935 when its rules were brought out by the Akhil Maharashtra Shareerika Shikshan Mandal. It comprises of two teams with nine participants each. Members of the chasing team sit on the ground in a straight row with alternative players positioned in opposite directions. The chasers have to catch the opposing team members before the stipulated time is over. 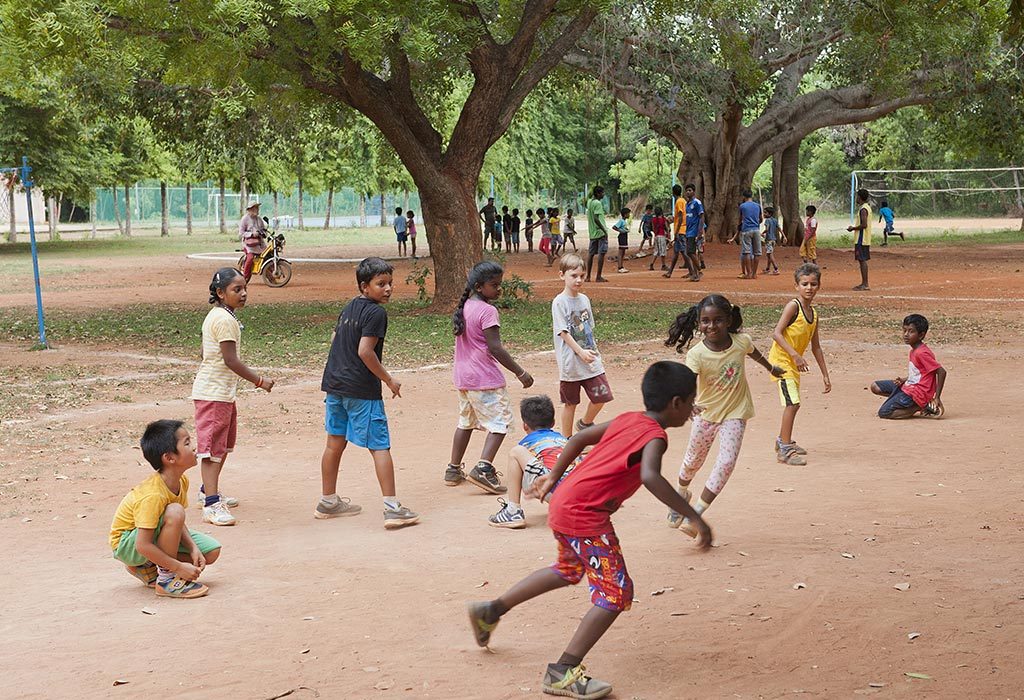 The origin of this game is unknown. It is commonly played all over the world under different names. The players hide in a previously decided marked area. The ‘denner’ has to shut his eyes and announce numbers loudly while the other players get time to hide. Then, the denner has to find the hidden players. Any number of people can play this game.

Dog and the Bone is a kids’ game contains two teams of 5 or more players each. An object like a handkerchief or stick is designated as the ‘bone’. A member of each team steps forward to encircle the bone placed in the middle of the playground. The aim is to retrieve the bone without being caught by the other player.

Maram Pitthi is similar to dodgeball. It comprises of two teams with any number of players. A large area is required to play this game. Players from one team form a circle and hit the opposing team members who enter the circle with a ball. The opposing team players have to try and evade being hit by the ball and those who get hit by the ball are declared ‘out’.

The mere mention of games like Kancha, Lagori, and Kho Kho is sure to make you nostalgic about your own childhood. It’s time to pass on the magic of these childhood games to our current generation which tends to live in a virtual world.

Also Read: Famous Folk Dances in India You Should Know