Baby Eyes Rolling Back - Is It Normal?
Should You Worry About Your Baby's Rolling Eye Movements?

Baby Eyes Rolling Back – Is It Normal?

Baby Eyes Rolling Back – Is It Normal? 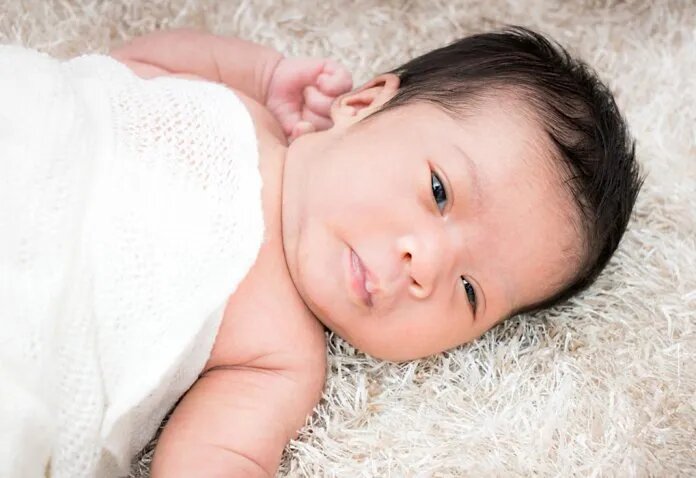 We sometimes roll our eyes to show our displeasure when something looks obnoxiously unpleasant or weird. But if your infant does that, you will be worried, no doubt! Of course, your little one won’t roll his eyes to show his displeasure or anger. Then why does a baby roll his eyes? And is it normal for a baby to roll his eyes? Well, the answer is a big ‘No’! Most babies may roll their eyes while asleep, but sometimes rolling the eyes can be because of various other reasons. Let us find out why babies roll their eyes and whether or not you should be concerned.

Why Do Babies Roll Their Eyes While Sleeping?

When a baby is born, his little body needs time to adjust to the outside world and mature. Like various other organs in his body, his eyes (or vision) are also in the development phase. This means that your baby’s vision and eye muscles will be weak. You need not concern yourself if your baby rolls his eyes while asleep because he will do less of it as he grows up. Instances of eye-rolling in infants are a part of normal development phenomenon. Consider it a normal developmental phenomenon if you see your baby rolling eyes upwards. When your little one is sleepy, you may even notice him rolling his eyes back in his head. Hence, the rolling of eyes can be associated with the infant’s drowsy state or the transition from a sleepy state to wakefulness. Sometimes, your little one may even roll his eyes while awake. But if your baby rolls his eyes too often, you should get him checked as it could be linked to serious medical conditions such as seizures, head trauma, low blood sugar, and hypocalcaemia.

Infants lack clear vision but can recognise movement, forms, and patterns. Newborns’ vision ranges from 20/200 to 20/400. The eyes may converge and lose focus, but they are perfectly normal.

2. Rolling Eyes Because He Is Capable

It is understandable if you are concerned that your child has recently begun rolling his eyes. However, remember that infants are capable of bizarre behaviours simply because they have learned how to.

Some particularly expressive infants may roll their eyes while frowning or expressing dissatisfaction.

There are rare circumstances in which eye rolling can be a sign of a medical concern. Eye rolling that is accompanied by diminished or lost consciousness has to be evaluated right away. Further aberrant eye movements may indicate a specific eye issue.

The eyes move “back and forth” due to this eye disorder. When eyesight should normalise at six months, it may become obvious as early as six weeks of age or may take longer to appear. A “block” in the nerve signals between the eye and the brain’s visual cortex causes nystagmus. For instance, congenital cataracts may be the root of the issue.

In this circumstance, one eye rolls or drifts in a different direction. Typically, one or more of the extraocular muscles are the cause. The term “lazy eye” is frequently used to describe the affected eye. Various forms of strabismus include the eye moving toward or away from the nasal bridge.

3. Children’s Eye-rolling As a Result of Seizures

Eye rolling could be a seizure symptom if it coexists with altered behaviour or strange bodily movements. These strange eye movements can happen in a variety of situations.

Due to head traumas, low blood sugar, or hypoglycemia, a newborn may be rolling its eyes.

What to Do If Your Infant Rolls Eyes?

Repeated observation is necessary to assess how severe an infant’s eye rolling is. You could record how often your infant rolls eyes and any accompanying symptoms. The baby’s tendency to roll their eyes each day should be noted daily for diagnosis.

If you can, record the occasion on your phone. It can be helpful when the baby is being examined by a medical professional, but no eye movements occur. Fever, illnesses, or a baby’s epilepsy problem can all cause seizures. Seek emergency medical attention to determine the cause.

As a parent, you need to be prompt in understanding whether or not your newborn’s eye movement, rolling of eyes, or the symptoms that your baby may be exhibiting require immediate medical assistance. Maintain a diary or log to monitor your baby’s eye movement. The log will help you establish the reasons that may trigger your baby to roll his eyes. It will also help you establish whether your baby rolls his eyes at a particular time of the day or not. If something concerning your baby’s health or condition appears fishy, act promptly and contact your baby’s paediatrician.

Suppose you feel that your newborn baby’s eyes rolling is accompanied by seizure-like symptoms, which may include stiffness of the limbs, constant crying, and shaky body movements. In that case, you need to ensure your baby’s safety. Seizures in babies may lead to complicated medical conditions, and seizures may occur if your baby may be running a high fever, has epilepsy, has severe infections etc. If your baby experiences a seizure, make your baby lie on the floor, preferably sideways, remove any tight clothing and take him to the doctor immediately to know the cause of the seizure.

You may not notice other signs or symptoms if your baby rolls his eyes due to the lack of muscle control. But suppose he rolls his eyesight due to some underlying medical condition. In that case, it may be accompanied by other noticeable symptoms like convulsions, shivering, trembling, irregular breathing, change in skin colour, jerky body movements, uncontrolled crying, and excessive irritability or other such symptoms.

If you are a first-time parent and your infant starts rolling his eyes, it will scare you, but don’t panic. It is a common problem in newborns and is generally associated with a lack of weak muscle control in the eyes. However, if you notice something abnormal, seek professional guidance. If anything abnormal may be detected, your baby’s paediatrician may suggest you refer a neurologist for further diagnosis and tests.

1. When Do Babies Stop Rolling Their Eyes?

A newborn’s eyes may occasionally stray or cross throughout the first few months of life. However, the eyes often straighten up when a baby is 4-6 months old.

2. Is It Normal For A Baby To Have Rapid Eye Movement?

Babies may move their eyes quickly in the first several months after birth for various reasons. Inherited or acquired Nystagmus can occasionally cause baby eyes to move from side to side repetitively or make circular eye movements in infants.