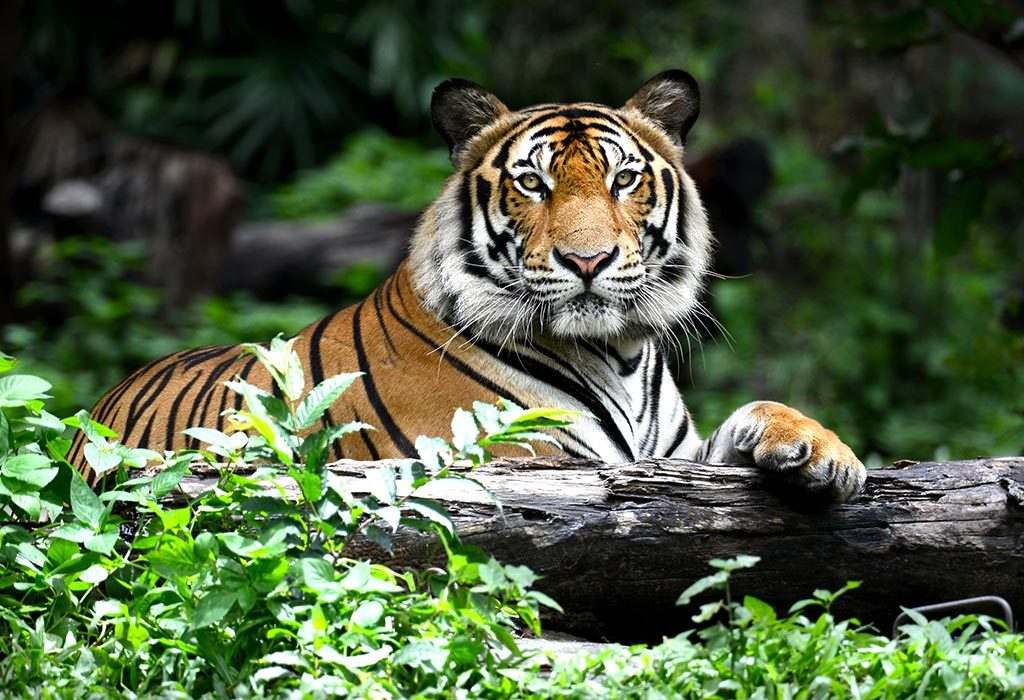 Beautiful, strong and fast, tigers are a force to be reckoned with. Native to Asia and eastern Russia, their scientific name is Panthera tigris and these animals are a part of the feline family, which basically means they are just really big cats! Tigers do share similar characteristics with the common house cat but they are much bigger and therefore much more dangerous. They prefer to live and hunt alone.

Tigers can weigh around 300 kilograms and measure to a length of 3.3 meters. They are the biggest cat species in the world. Tigers have a unique coat that is most commonly a reddish or orange shade with black stripes. Females are smaller than the males of the species, and the northern tigers are found to be much larger than the ones in the south. For example, Bengal tigers are much larger in size than Sumatran Tigers, which are native to Indonesia. Every tiger has around 30 sharp teeth and is known to have the biggest canines amongst all the big cats. Their legs are muscular, and they have very sharp claws.

While there are some sub-species of tigers that have gone extinct, there are currently six in existence.

These tigers are native to India, though they are also found in Nepal, Bhutan and Bangladesh. They have the standard orange and black striped coats, but there have been cases of tigers being born with white and black striped fur and blue eyes. This is a genetic mutation and “White Tigers” are not a separate sub-species.

These tigers are found mainly in certain parts of Russia, which is very cold. In order to survive, these tigers have extremely thick skin and their coat is very dense.

These tigers are smaller in size and are more solitary creatures that avoid populated areas as much as they can.

Their native home is distributed among the tropical forests of the Malay Peninsula. When it is available, this tiger hunts and preys on livestock, causing there to be much conflict between them and humans.

Native to South China, these tigers have not been spotted anywhere in the wild for more than twenty-five years! There are only a few remaining in captivity.

These tigers are native to Sumatra and are one of the smaller sub-species of tigers. How Do Tigers Give Birth to Their Cubs?

Here are some interesting facts on how their mother gives birth to and looks after her offspring as well as some baby tiger (called cubs) facts for kids: How Do They Form Their Own Territories?

Tigers form their territories in the following way:

Tigers are carnivorous and therefore prefer to eat meat. Here are some hunting and food habits of tigers:

How Long Do Tigers Live?

Though the average lifespan for tigers is around eight to ten years in the wild, they have been known to live for as long as 26 years in captivity. This is because they face many dangers in the wild that prevents most of them reaching maturity. Some of these dangers include starvation due to a shortage of prey, fighting over territory and being unable to defend themselves when they are old and when they are cubs, thereby making them prey for others such as packs of wild dogs and bears. Siberian tigers live for 10 to 15 years in the wild but can live up to 22 years in captivity. Sadly, human beings are causing tigers to become extinct. They are being hunted mainly for their beautiful fur coats. Another way mankind is responsible is by destroying their natural habitats; without a proper habitat, these animals will not survive in the wild due to a shortage of prey and territories.

Other Must Know Facts of Tigers for Children

Here are some other interesting tiger facts for kids:

A couple of endangered tiger facts for kids are:

Tigers are a rich part of the Indian culture, not only because they are the most popular and largest of all tiger sub-species originates from the Indian sub-continent, but also because they are the national animal. Around the world, tiger species are becoming extinct as more and more of their habitat is being destroyed to make way for human settlements. As humans, it is our responsibility to do all that we can to help tiger populations to survive around the world; otherwise, we are in danger of losing these magnificent creatures forever.