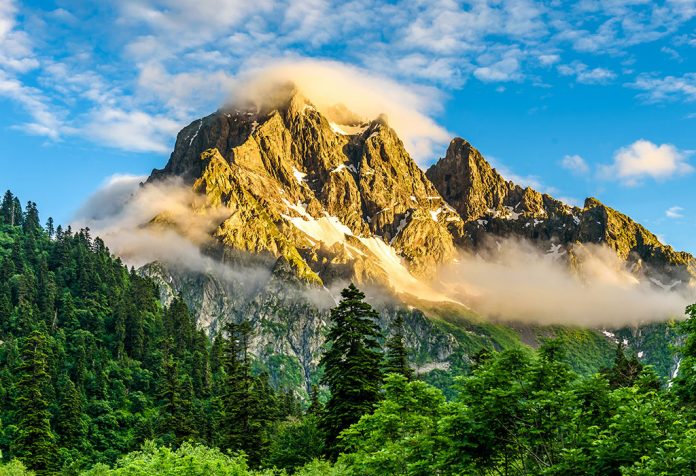 As soon as the holiday season begins, families start planning trips to distant locations. Many families prefer going to hill stations and up to the mountains to have a wonderful vacation by themselves. Children love being there since the view from mountaintops is breathtaking, and the lovely atmosphere filled with silence and greenery can be quite serene. It’s a different world out there for young kids, especially when our cities today are merely dense forests of concrete blocks with barely any sign of lush vegetation or animals around. Stoking the interest of your kid into how the mountains were formed, and telling the story of how Earth takes various shapes can get them excited for yet another trip and dive into their books or the Internet to look for more information.

For a kid, the environment definition of a mountain is something that is taller & steeper than a hill.

In proper terms, a mountain can be described to be a formation of land which rises above the surrounding area and has a specific point at its top, called the peak.

Most elevations that are taller than 600m are termed mountains. Anything that is smaller than a mountain is generally called a hill.

How are Mountains Formed?

Some natural phenomena can result in the formation of mountains, both on land as well as under the sea. The entire process is quite complicated but can be broken down into some major aspects. The surface of the Earth is a combination of various land masses, called tectonic plates. These plates are moving all the time, and they also tend to collide with each other. The collision usually causes the land to fold between them, leading it to rise above the surface and form a mountain.

According to the other phenomena, mountains form in a completely different way. For example, the eruption of a volcano from under the Earth can cause a mountain to form. Similarly, the rocks and other sediments could assimilate together to create a small mountain, too.

Where are Mountains Found?

Mountains are one of the largest naturally-occurring Earth structures that can be found in nearly every area of the globe. When compared by nations across the world, almost 75% of the countries have mountain ranges of their own. All the continents have their mountain ranges with some of the tallest peaks, as well as the oceans surrounding us, with expansive mountain ranges spreading far and wide below.

What are The Types of Mountains?

Since mountains are formed in various ways and due to a variety of natural phenomena, their structure and shape may vary. This enables the categorization of mountains. A few major ones are described below. 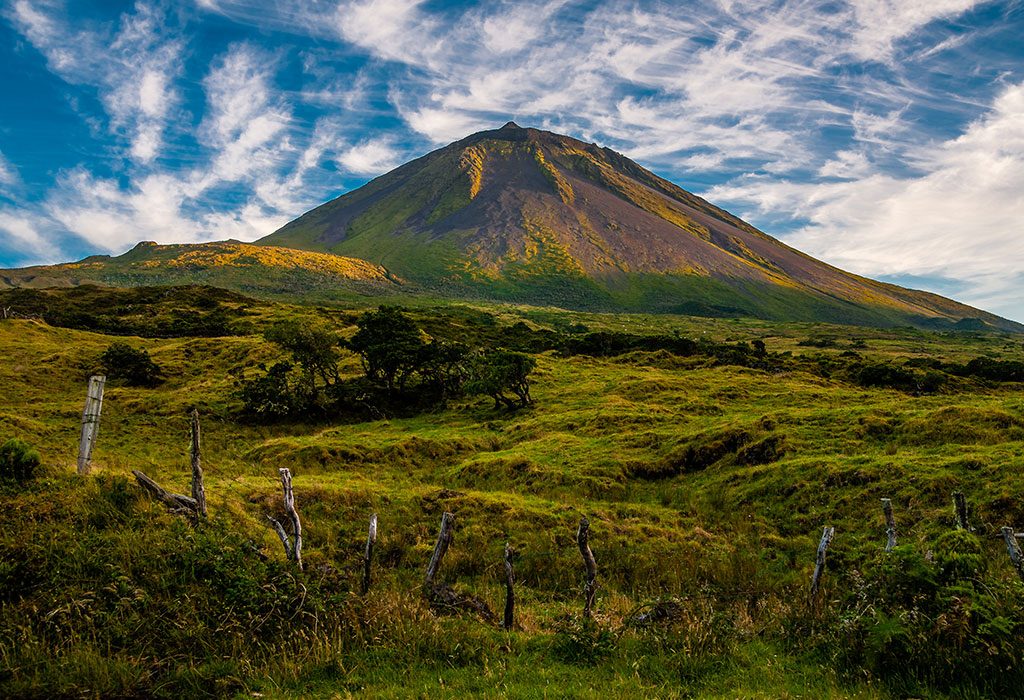 As mentioned earlier, an eruption of a volcano can also result in the formation of a mountain. In an eruption, the molten rock, also termed as magma, which is present under the Earth, is spewed outwards from the mouth of the volcano, or even emerges out of various cracks and splits surrounding it. The cold temperature of the atmosphere ends up cooling the magma, where it begins to solidify into a rock-like structure. Most of these magma structures assimilate in a dome-like shape, giving rise to dome mountains. At times, consistent erosion of mountain-tops by the wind makes the dome even more evident. 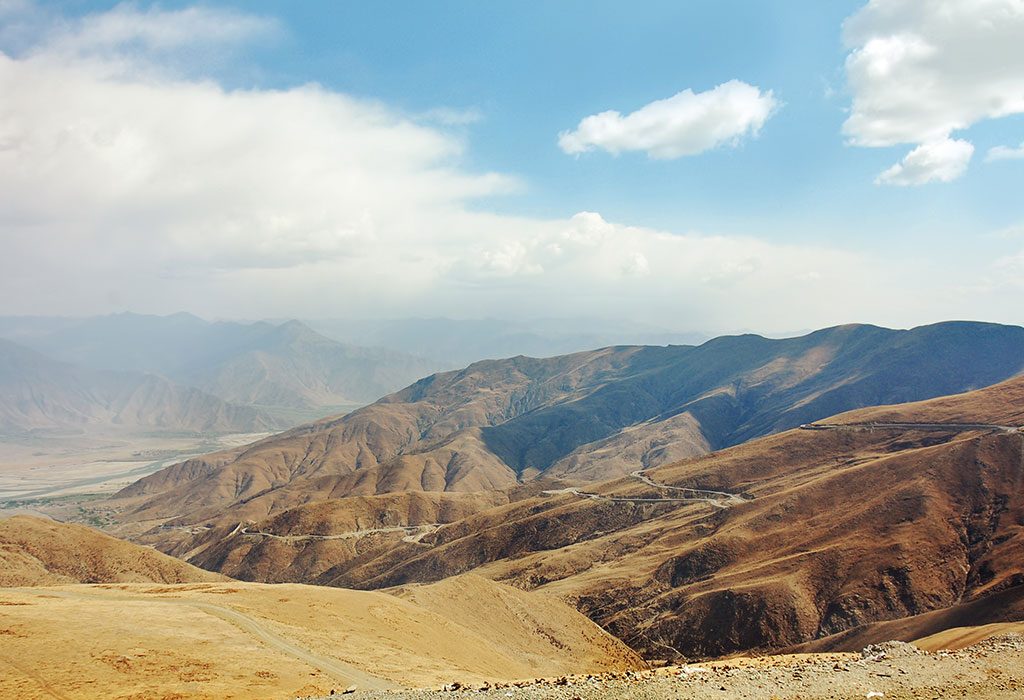 Amongst various natural phenomena, erosion of land is the most frequent one. These can be the result of rain, water, rivers, wind, and so on. Any land masses that are formed either by the plates folding over each other or by volcanic eruptions undergo substantial erosion over the years. These can cause their peaks to flatten completely, making vast plains on the top. These land masses with flat peaks are called plateau mountains. 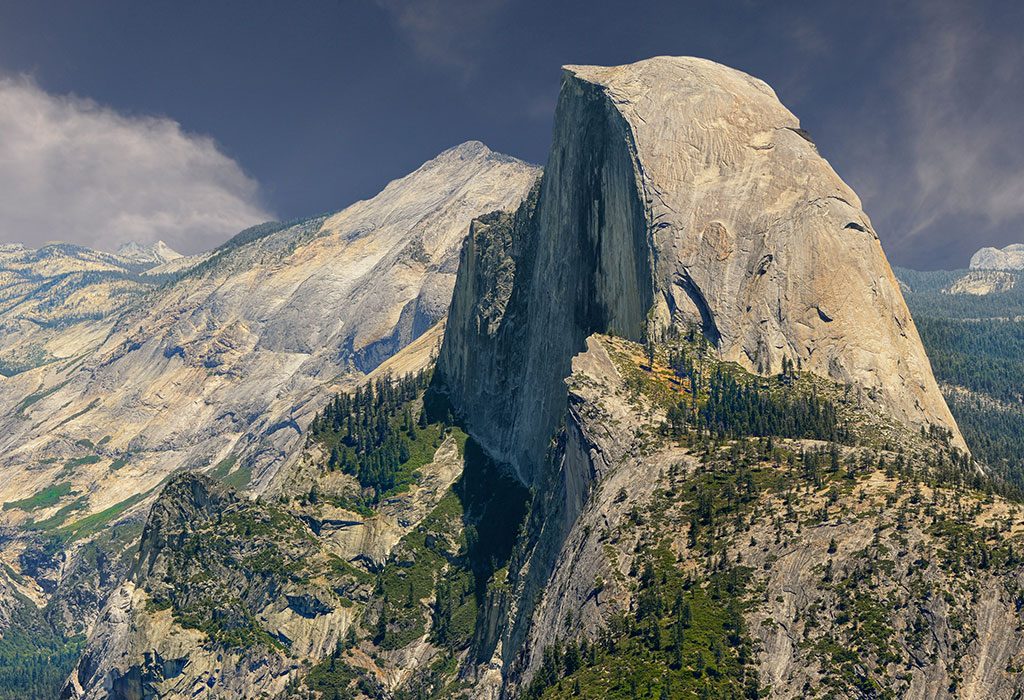 The surface of the Earth is not homogenous and continuous. Various cracks are present all over it which run for long distances, termed as faults. These faults tend to meet each other in specific locations, causing some amount of landmass to rise above, while the rest of it to enter the Earth’s surface. A stacking of such layers takes place over an extended period, forming fault block mountains. Since their formation process is so specific, the structure of such mountains is consistent across different regions. These mountains have a slope at the back region while the front part is extremely steep. The Sierra Nevada and Harz mountain ranges are famous fault block mountains. 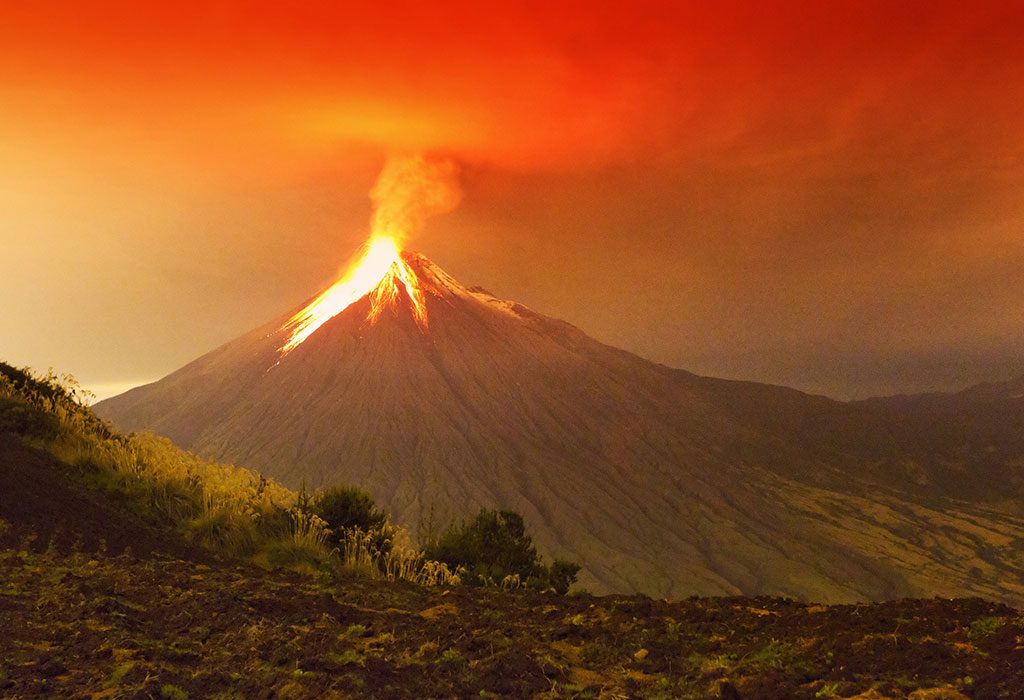 These can be termed as the initial phase of most mountains which later take either the form of dome mountains or plateau mountains, depending on which part of the world they are located. Any time a volcanic eruption takes place, a lot of lava is spewed out of its mouth, along with magma. This lava continues to flow around the surface as long as it is hot and also pools up in certain areas. Later, as its temperature reduces and it cools down, the lava hardens to form a solid rocky structure, which is mixed with magma and volcanic rocks. This pretty much forms a volcanic mountain. 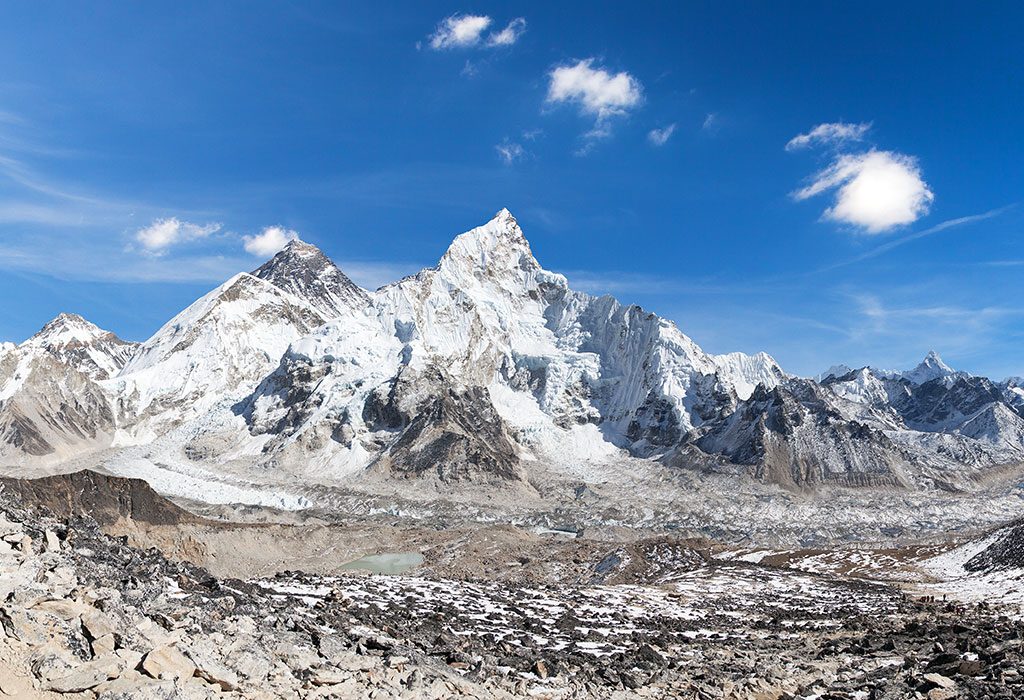 Some of the largest mountain ranges that are present on the planet are fold mountains. The process of their formation is the most common one, which also ends up causing their height to increase over time. The tectonic plates of the Earth are always moving around without our knowledge. Whenever these plates collide head-on, their combined force pushes the landmass tremendously, causing them to rise on both ends and form towering structures. The Himalayas, Andes, Alps, and many others are stunning examples of how massive fold mountains can turn out to be, and how powerful the tectonic forces of the Earth generally are.

What is Meant By a Mountain Range?

How is a Mountain Measured?

Since the height of the mountain is what is used to define the tallest peak and numerous other parameters, there are multiple ways to establish the reference level against which a mountain’s height can be measured.

The most common method is to measure its height from the sea-level up to the peak. In certain mountains, the height is also measured from their exact base up to the peak, which can be different from the previous one. A highly accurate methodology applied to mountains above and below the sea is to measure the distance from the centre of the earth to the mountain’s peak.

What is Mountain System?

Just like a group of mountains is termed to be a range, a collection of such ranges is called a mountain system. These contain numerous peaks and valleys, being a popular attraction for tourists and residents nearby.

Do People Reside in The Mountains?

It might seem surprising, but a lot of people live in the mountain ranges as well as pretty close to them. It has been surmised that nearly a tenth of the total population of the world resides within various mountain ranges.

Is It Difficult to Live in The Mountains?

While most of us enjoy a small holiday or a visit to the mountains, living there is a completely different experience. The percentage of oxygen is quite low, which can make it difficult to breathe. The soil may not always be fertile, and water tends to flow down the ranges. However, people can make a living by appealing to the tourists.

Which Sports/Games Can Be Played in a Mountain? 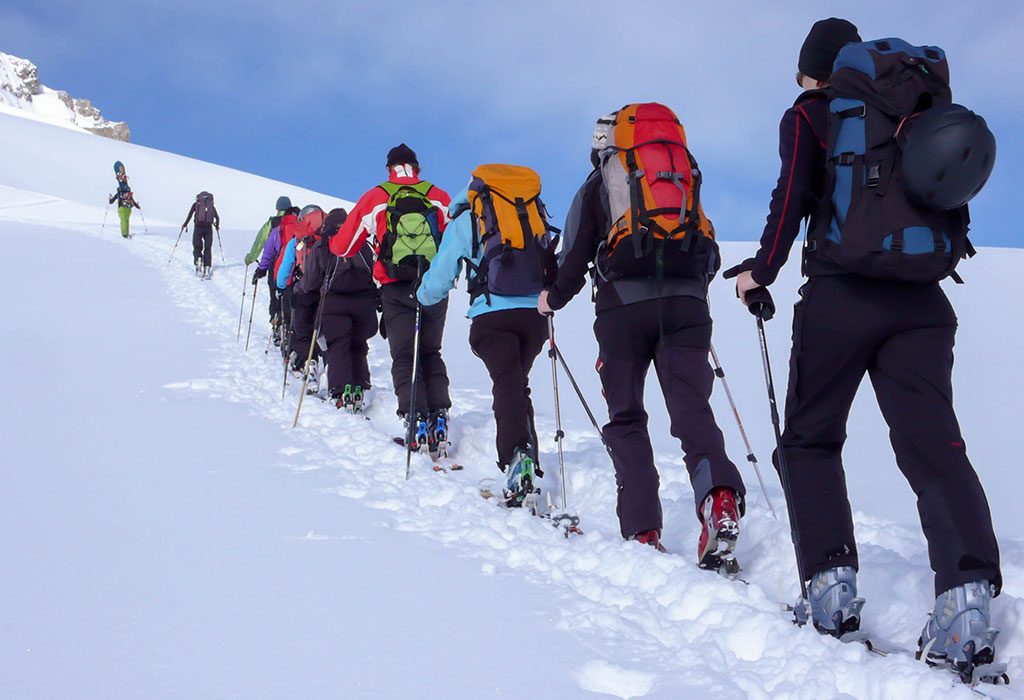 The height of the mountains has a great advantage for sports, allowing a large variety of them to be executed and enjoyed. Right from rock climbing to bungee jumping, as well as paragliding and snow-skiing, simple sports such as water rafting can be enjoyed in the gorges between the mountains, too.

Other Important Facts about Mountains for Kids

Apart from the information presented above, that can provide a great foundation for your kids, here are some interesting facts related to mountains that can leave them surprised, too.

Putting together some rocky mountain facts and information for kids can instil within children a sense of respect towards nature and natural habitats. Conservation of the environment is another aspect that children must be fully aware of. These facts can increase their interest in different aspects of Earth and its surroundings.

Things You Should Know About a Virgo Child

500 Baby Girl Names That Start with B