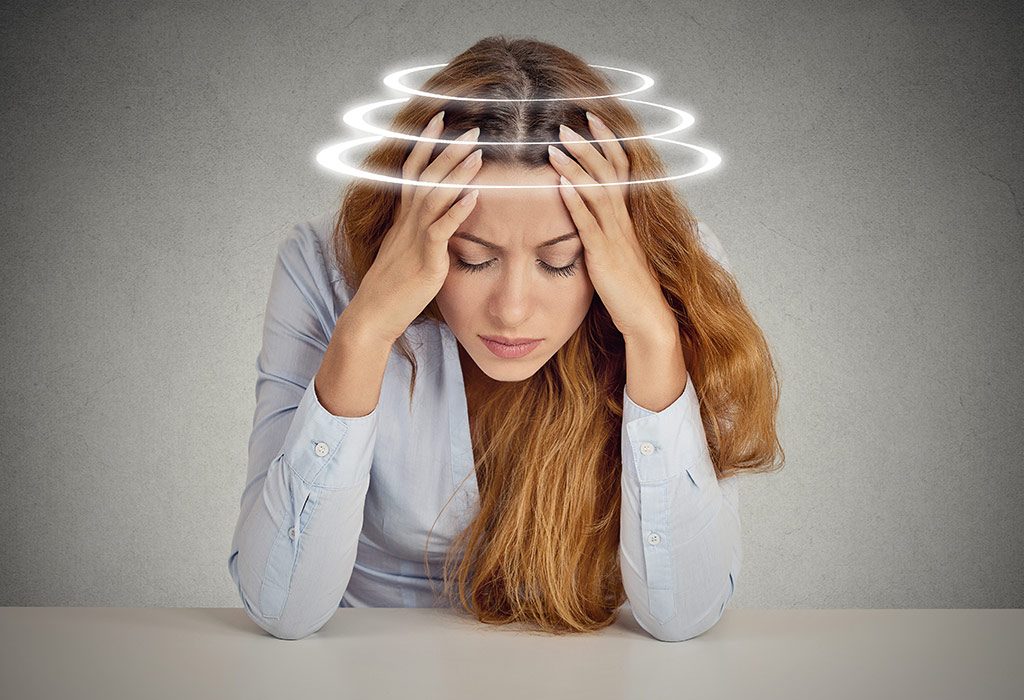 Feeling lightheaded, dizzy and faint at times during the day is a normal occurrence during pregnancy, especially in the first trimester. As the body undergoes changes to accommodate a baby, the variation in blood pressure, sugar levels and hormones cause you to feel dizzy every now and then.  Should you be worried if you are feeling dizzy during pregnancy? Not really. Because it is a normal occurrence to feel dizzy and faint-headed when pregnant. However, you must have the required knowledge to be able to handle the situation when you feel dizzy and understand when to contact a medical expert. We aim to address most of the questions you may have about dizziness during pregnancy in this article. Read on to know more.

Video: Dizziness During Pregnancy – Causes & How to Deal

What Is Dizziness During Pregnancy?

Feeling faint and nauseous can begin as early as two weeks after conception. Dizziness, accompanied by morning sickness, and nausea at other times during the day can be an indicator of pregnancy. The body’s physiological changes can cause expectant mothers to get disoriented and feel a sense of vertigo (a sense of fainting or falling). The cause for dizziness during early pregnancy depends on how far along the mother is, and it ranges from feeling light-headed to fainting.

Is It Normal to Feel Dizzy During Pregnancy?

Yes, it is absolutely normal to feel dizzy during pregnancy. Dizziness affects nearly 75% of pregnant women in varying degrees. It is a common symptom during the first trimester but can continue throughout the pregnancy in some women.

Is Feeling Dizzy Harmful For Your Pregnancy?

As mentioned earlier, dizziness during pregnancy is normal. Although the dizzy feeling is not harmful in itself, the light-headedness can lead to fainting, which can be dangerous as there is a chance you might fall and injure yourself or the baby inside you.

Are you wondering why pregnant women feel dizzy? Let’s check out the causes of dizziness during pregnancy.

Causes of Dizziness During Pregnancy

The cause for dizziness varies throughout pregnancy depending on the stage of pregnancy. Therefore, different women experience different levels of dizziness and for varying lengths of time. Here are some causes of dizziness during pregnancy.

Things to Do When You Suddenly Feel Dizzy Let’s now take a look at some remedies that can help alleviate dizziness.

Remedies to Alleviate Dizziness During Pregnancy

Although dizziness during pregnancy is common and you can’t do much about it, here are some ways you can reduce it:

Should You Consult a Doctor for Dizziness During Pregnancy?

Dizziness, once in a while, due to heat, movement or hunger, is normal during pregnancy. However, if it is frequent and is coupled with symptoms such as severe headaches, blurred vision, palpitations, impaired speech, numbness, chest pain, shortness of breath, tingling and vaginal bleeding, immediate medical help should be sought. In early pregnancy, if dizziness is followed by abdominal pain and a racing pulse, it could be an indication of a ruptured ectopic pregnancy, which is also a medical emergency and should be dealt with immediately.

Pregnancy is a roller coaster ride. Learning to recognise your symptoms early on and taking precautionary measures can help reduce your dizziness. If that does not work, it is time to call your doctor and get yourself checked.

Previous article « Caffeine Use during Pregnancy
Next article Dengue in Pregnancy »